Talk about an empty chair! Clint Eastwood doesn't understand how the government works

Like Trump, Eastwood thinks an intrepid POTUS-CEO can fix everything, but the US government is not a corporation 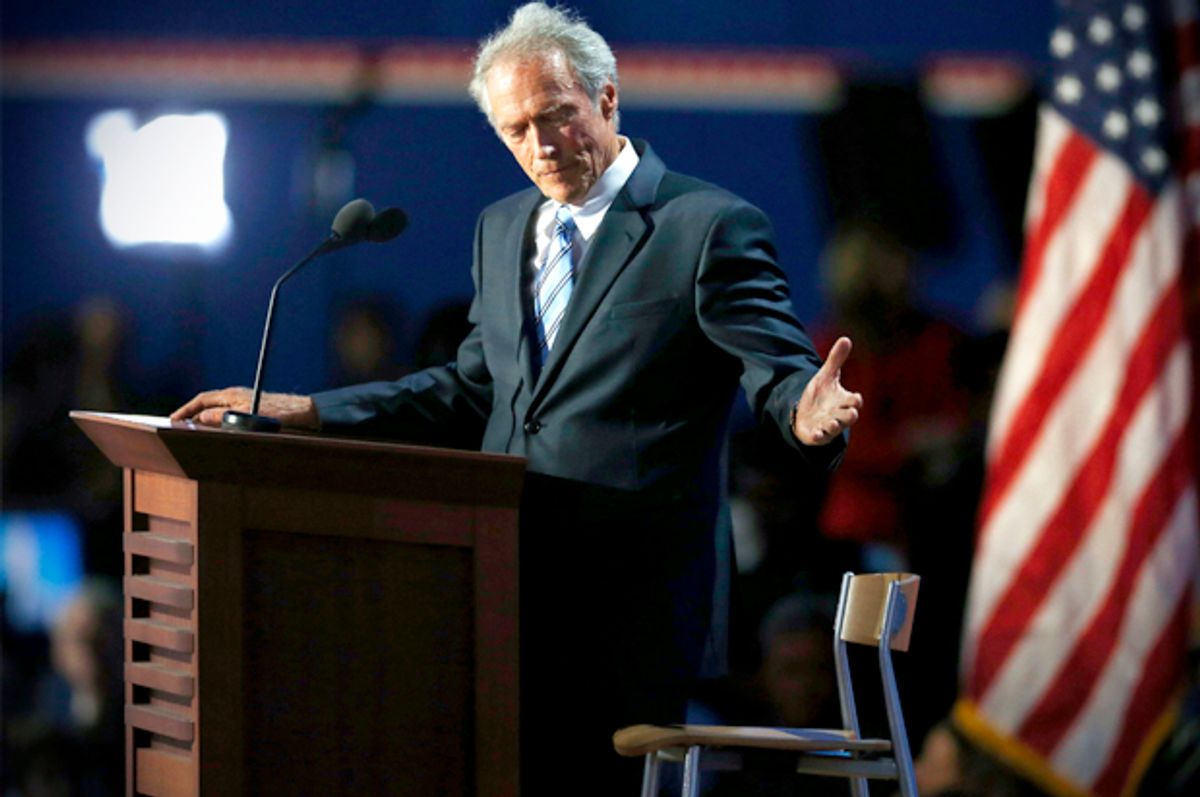 So many of the reactions to Esquire’s interview of Clint Eastwood have focused on the inherent racism of his endorsing, if not Donald Trump, at least the anti-political correctness stance on which Trump has built most of his appeal to his voters. So it was easy to miss another story. Namely, that Clint Eastwood has no clue as to how the federal government works.

It is perhaps unfair to hold Eastwood to the standards we would require of, say, a basic civics teacher in high school. But since millions more people will listen to a famous actor and director than to civics teachers, it is worth pointing out this comment, which he made while talking about that moment at the Republican National Convention in 2012 when he shared the stage with an empty chair.

It was silly at the time, but I was standing backstage and I'm hearing everybody say the same thing: "Oh, this guy's a great guy." Great, he's a great guy. I've got to say something more. And so I'm listening to an old Neil Diamond thing and he's going, "And no one heard at all / Not even the chair." And I'm thinking, That's Obama. He doesn't go to work. He doesn't go down to Congress and make a deal. What the hell's he doing sitting in the White House? If I were in that job, I'd get down there and make a deal. Sure, Congress are lazy bastards, but so what? You're the top guy. You're the president of the company. It's your responsibility to make sure everybody does well. It's the same with every company in this country, whether it's a two-man company or a two-hundred-man company.

Left unsaid here is how Obama is supposed to make a deal with Congress when its leaders swore the night of his inauguration that they would say “no” to every single one of his proposals no matter what. But even if Eastwood didn’t know about that infamous episode, his comments here indicate he thinks that the president is some sort of CEO of a company, and Congress is basically his board of directors, or a horde of unruly junior vice presidents.

By this reading, all Obama has to do to get Congress going is get in there and bust some heads like he’s Jack Warner on an amphetamine bender, and boom! Congress will do his bidding.

What’s particularly striking here is that while Eastwood isn’t endorsing the racist sweet potato who captured the Republican nomination, his theory of governance is very similar to Trump’s. Time and again on the campaign trail over the last year, Trump has talked about the presidency as if it’s a business venture, one where success is defined as making the best deal and maximizing profits for shareholders. Where anyone who doesn’t go along with the program – rival companies, reluctant financiers, Estonia – will be crushed under a Trump-led juggernaut.

It's worth noting that Trump's campaign manager Paul Manafort told an interviewer that the mogul sees the presidency as being like the chairman of the board in its duties, while his vice president will be the chief executive doing all the work. Or think of Donald Trump Jr. allegedly telling John Kasich that, should he join Trump as his vice president, he would be in charge of all foreign and domestic policy while the president’s job would be “making America great again.”

What this theory of governance misses, as anyone remotely familiar with basic civics can tell you, is that Congress is a co-equal branch of government. It is not subservient to the president, nor are its members dependent on him for employment. It is an institution with its own rules and codes that allow it to function. If members decide to blow up many of the old norms that have traditionally allowed Congress and the president to work together, as many of its members have done over the last couple of decades, there is not much Obama could have said or done to change that. Though he did in fact try, at least in his first term, before he got tired of John Boehner and Mitch McConnell slapping away his hand every time he extended it.

Reading this interview, it is hard to believe that Eastwood, one of Hollywood’s few conservatives, isn’t endorsing Trump. The two men come from jobs – running their own companies and film sets – where their word is the final say on any matter. They share a certain “just get it done” style of leadership and an impatience for what they see as whininess and political correctness.

Basically, they are two old men whom the culture has passed by, and they are very cranky about it.

Still, even without the endorsement, maybe Eastwood can find work in the Trump administration as its official filmmaker. There is precedent, after all.