"A folk tale, but with swearing": Drew Magary on his new novel "The Hike" 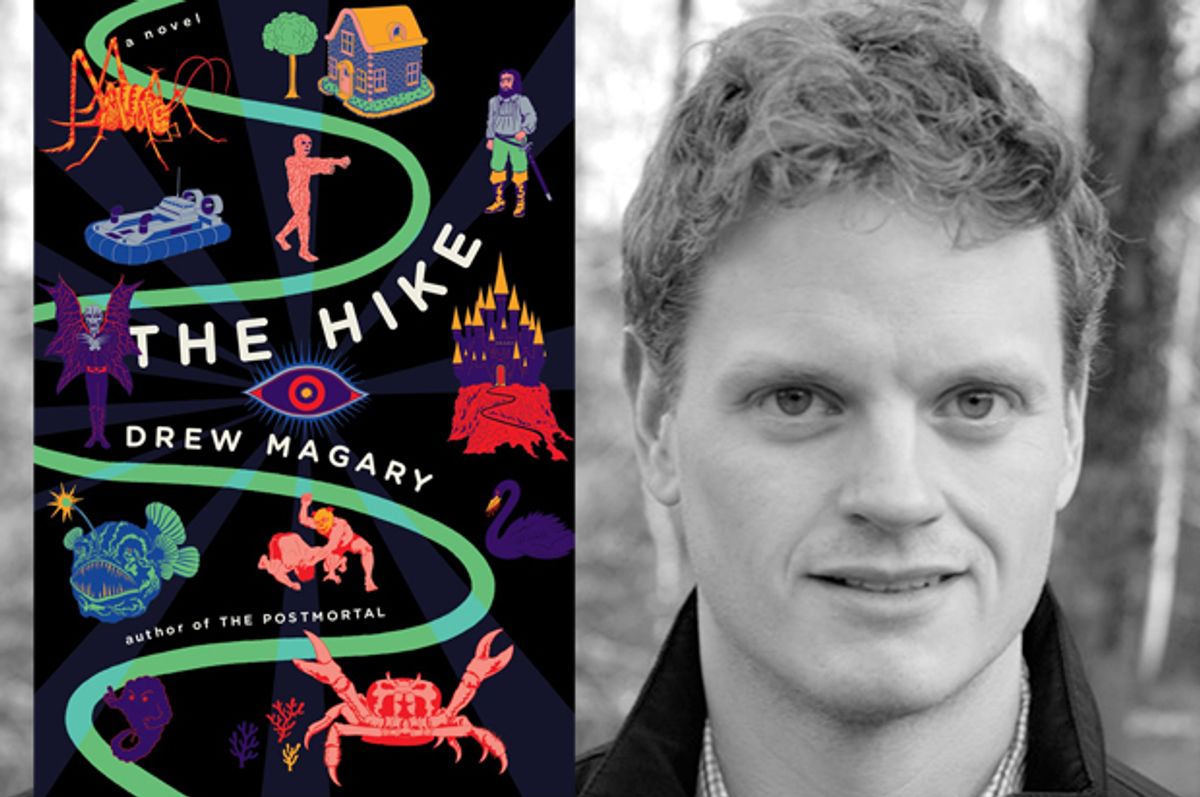 My first exposure to Drew Magary was his work on Deadspin, specifically his recurring column “Balls Deep,” which frequently managed to (1) make me laugh really hard, and then (2) immediately feel guilty for laughing so hard. He has since gone on to become a regular contributor for GQ, and to write for a number of other equally fancy places, displaying versatility and a breadth of topics within his range. But the main thing he does has not changed — a knack for rhythm, conversational and engaging. A blustery patter that frequently erupts into full-throated rants with liberal use of the CAPS LOCK. Talking fast and loud and profane, the fastness and loudness and profanity collectively having the effect (whether intended or not) of disguising, or at least delaying, the discovery by the reader of how smart a writer Magary is, and how, amidst the ALL-CAPS screaming, one might detect undertones of vulnerability and emotional honesty, surprising qualities to his writing which have a way of modulating the foul-mouthed rants into something interesting and polyphonic and possibly revealing about American dude-dom in the 2010s, or something like that, all of which becomes evident when you read his fiction, especially his new novel, "The Hike." Also, he’s really good at dick jokes.

Magary and I talked recently about "The Hike," nostalgia, business trips, video games and the inspirations for the mythical beasts in his book.

I mean this in a good way: Your new novel is demented.

A man, Ben, while on a business trip goes on a hike, during which he encounters, among other things, murderous dogfaces, sentient crabs, and a giant woman whose typical meal is a stew made out of several dudes (I’m picturing an enormous bowl of Campbell’s Chunky Soup with adult-male torsos floating around).

I’m asking because, despite all of the above, at the core of this insane and entertaining story is, I think, a story about a guy trying to get home to his loved ones—and the portions of the book that give us glimpses of Ben’s domestic life are among its most affecting and emotionally direct. Ben, like you, is married with kid(s). So, and I apologize for asking, but is there anything autobiographical in "The Hike?"

The beginning of the story actually all happened. I was on a business trip and staying at this creepy inn deep in the woods, and I was the only guest there, and the clerk said there was nowhere to walk outside even though there TOTALLY was, and then I found a path anyway, which was fucking WEIRD. So all that was based on an actual experience I had. In a way, the book is just an allegory about the loneliness of business travel.

As for Ben, there are parts of him that are me, but parts that very much aren't. Obviously, I lifted a lot of his parenting and marriage insights from my own, and I also grew up in Minnesota, but then I went ahead and took a lot of liberties with him, compared to my own dull backstory. That's the fun of writing fiction. You take what you know and then twist it so that it's way more interesting. If the character really HAD been me, you would have rooted for him to get killed by page 20.

The “loneliness of business travel” has inspired a number of moving and funny stories in recent years. What’s that about? What makes it such a revealing and/or representative part of modern experience? And how did it play into your process of conceiving of and writing "The Hike?"

Well, when I travel for business, I'm dead alone. And I have a wife and three loud kids, so being alone out in the ether feels kind of alien. I can feel how alone I am, and how far away my loved ones are. And then I visualize all kinds of nightmares where I can't get back to them, or vice versa. There's this sort of respite you get being away from loved ones, but you're always keenly aware of the fact that they're gone. And sometimes that really wears on me, like if I'm tossing and turning at 3 a.m. in some fucking hotel room somewhere.

You certainly capture that alien feeling in the story — even in what is primarily a comic novel, there’s a palpable sense of horror. Did you write significant portions of it while traveling on business? And speaking of that business, is your travel primarily for GQ, or Deadspin, and/or other publications that you work for?

When I travel, it’s usually on assignment for GQ, or for speaking gigs or whatever else. Sometimes I get trips where I can see friends, but sometimes you get sent places where you know literally no one, and that can get really lonely.

But I actually wrote the whole thing at home. I hate writing on the road, only because my back is all fucked up and laptops do me no favors.

While on his hike, Ben encounters a series of fantastical creatures and beings — some foes, some allies, most of them impossible to explain out of context (you just have to read the book)! Were there any particular sources of inspiration, things you’ve read/watched/played that were part of the mix?

It was a mix of completely random shit. I remember I caught my reflection in the bathroom mirror once in the middle of the night and my eyes were glowing, and THAT went in. So just bits and pieces like that. But the big inspiration for me was a woman named Ruth Manning-Sanders. Back when I was a kid, I used to hit the library and take out these folk tale compilations of hers called "A Book of Demons" and "A Book of Dragons" and more. She had a compendium for every creature and magical animal — stories from every country — and I read pretty much all of them. And the tales usually had to do with enchanted objects and brave strong lads who find them. I was way into those books, and the book (hopefully) pays tribute to them.

There’s an atmospheric quality to the book, a mix of creepiness and melancholy. Even a sense of quietness. The crab, Fermona, the woman in the forest, while they’re definitely eerie, they’re also kind of lonely. Now that you mention those books, and your affection for them, something clicks for me — it might be that the quality of the atmosphere you evoke is actually nostalgia. That’s not really a question, is it? Let me see if I can pull one out of there. How about: Is nostalgia something you thought about at all in the writing?

I don't know about nostalgia, except in the way the story is told, because I loved those old folk tales and just wanted to go live inside something like that for a little while. I do know that, when I'm alone, my past is the only companion I have. My family's not there, so all I've got are the pictures and memories of them. And then there's memories of the world beyond them. Sometimes I'll think about what happened a day ago, sometimes what happened 20 years ago. That all comes with me whenever I'm alone, and sometimes that's nice and sometimes it's a thing I gotta reckon with.

The other thing is that, ever since I was a kid, I always wanted to walk into the forest and find something there, like a door. C.S. Lewis-type shit. I think that's natural, right? Sometimes you just wonder about what's it like to get lost.

That’s one of the most appealing things about the story, is watching Ben get more and more lost. How the narrative propels Ben into his adventure, and that sense of anticipation as we get deeper into the woods as Ben gets increasingly far from anything familiar or comfortable. Ben gets lost in more ways than one, doesn’t he? Is it fair to describe this as a metaphysical novel? And if not, then how would you describe the novel?

At one point, I considered subtitling it "a folk tale" but that sounded so pretentious and annoying that I couldn't bring myself to do it. But if I were reaching for some kinda description, that would probably do it. A folk tale, but with swearing. And obviously there's some fantasy and horror and existential shit going on, but I think the main thrust is to tell people it's a good-ass yarn. We need more yarns, man. I am pro-yarn.

The book feels both timeless and up-to-the-moment contemporary — you said “folk tale” and the book jacket says a mix of “fairy tale” but also… video games, which I think is accurate. There’s this idea of staying on The Path being of paramount importance (and conversely, that straying from it is lethal and dumb), which is a rich and layered metaphor, and for me evokes all kinds of things — the forced march of linear games versus the freedom of open-world games, and how games are (or aren’t) like stories. Were video games on your mind at all, in the writing of this? Any games in particular that you play or played during the writing, or maybe played as a kid that went into the mix?

Yeah I played a lot of "King's Quest" when I was a kid, and that factored in heavily, because those games were rudimentary point-and-click fairy tale games that didn't always make sense. Like sometimes you would leave a spot and then have to come back five times in order for an important thing to appear. And I'll always remember those games fondly, even when they were infuriating.

As for next stuff, I've tried goofing around with novel #3 this spring but it's been a little bit futile. This isn't unusual for me. I only wrote "The Hike" after false starts with two other attempts at a second novel. So hopefully I take a walk this fall and witness an alien invasion and that'll be all the juice I need.

Charles Yu is the author of three books. His writing has appeared in The New Yorker, The New York Times Book Review and Slate, among other places. He has also written for HBO’s upcoming series "Westworld."