This is not a moment, it's a movement: More at stake for Sanders supporters than merely the 2016 election

Defeating Trump in November is imperative, but so is maintaining a popular movement long after the votes are cast 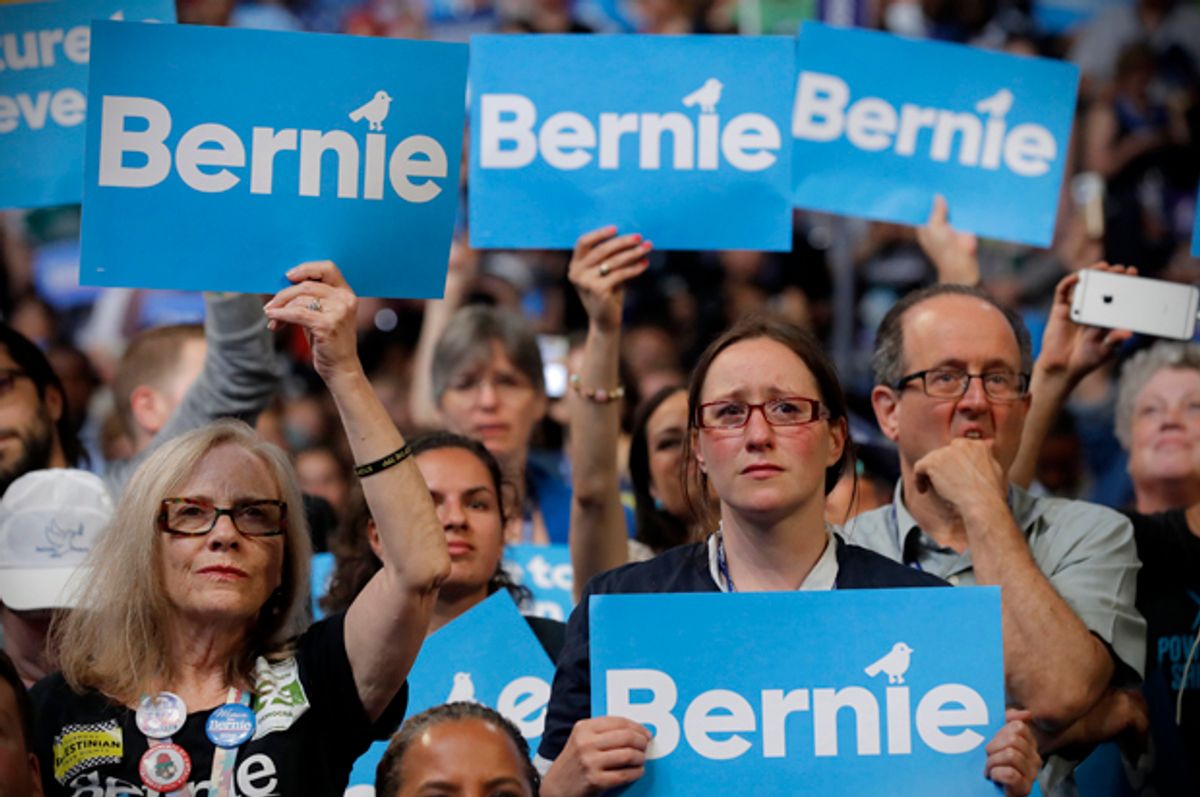 On the first day of the convention, Sanders delegates were loud and outspoken in their discontent, booing the recently resigned DNC Chair Debbie Wasserman Schultz off the stage at her state’s delegate breakfast and drowning out convention speakers with every mention of Clinton’s name. Outside the Wells Fargo Center, meanwhile, thousands of protesters flooded the streets of Philadelphia — though the convention area was sealed off by a four-mile long fence, which kept things relatively peaceful for attendees.

This tense and contentious climate continued throughout the week, with a group of Sanders delegates staging a walkout on Tuesday night after Clinton was formally nominated and outside protests becoming increasingly unruly as the week progressed.

In spite of all this disorder, the Democratic convention was, broadly speaking, a success — especially when compared to the previous week’s Republican National Convention, which some of the most prominent Republican figures declined to attend because of their party's nominee. For Democrats, the disunity was as plain and evident as Donald Trump’s xenophobia; but the speakers were effective and inspiring, which, in an election against Trump’s intolerable negativity, was probably enough.

Still, the stark differences and disagreements between Clinton and Sanders supporters were on full display, and this infighting will no doubt shape the future of the party. In a nutshell, the former are predominately Democratic partisans who subscribe to a binary way of thinking about politics (e.g., Republican vs. Democrat, conservative vs. liberal), while the latter tend to be progressives who champion principles over party and reject partisan narratives. At the convention, the former rolled their eyes and shook their heads in disgust whenever the latter booed or chanted (nothing irks Democratic partisans quite like rudeness), and were attending for their candidate and their party. The latter, who showed up with pro-Palestinian rights and anti-TPP signs, attended the convention for their candidate, but more importantly, for their movement.

This conflict between the party faithful and those who are committed to a broader movement reveals a struggle currently taking place in the Democratic party — and this struggle highlights the difference between electoral politics and movement politics, a subject that Bruce Shapiro, contributing editor at The Nation, touched on in an article last week:

“Elected officials, even the best and most principled, operate within the parameters of possibility that they discern in their constituency. In that sense, elected officials — and American presidents most of all — are the end of the political digestive system. Electoral politics is usually the last place change gets felt… Movement politics, on the other hand, is about reshaping and redefining those parameters. Moving the goalposts.”

For Sanders and many of his supporters, the political revolution is far from over; but at the same time, the next few months must be dedicated first and foremost to stopping Donald Trump (i.e., electoral politics). In a recent interview with Rolling Stone, Jane Sanders explained her husband’s decision to endorse Clinton: “His choice was to endorse [Clinton] — but, at the same time, fight like hell to keep the revolution alive, and keep alive the issues that we all stand behind. So we need [our supporters]. We need them engaged, and we need them to participate. And whatever they decide, it's their conscience, and they should decide whatever they want. Our job is to defeat Donald Trump; our conscience says we can't have that.”

Bernie supporters seem to have taken the senator’s call for a political revolution to heart, and in April, a group of Sanders campaign staffers and volunteers introduced a plan to “recruit and run 400+ candidates as a single, unified campaign with a single plan” for the 2018 midterm elections. This bold initiative, called “Brand New Congress,” is a nonpartisan campaign based on shared principles rather than party identification; a fusion of electoral politics and movement politics with the ultimate goal of electing principled non-politicians across the country. In a statement to this author, co-founder of Brand New Congress and former Sanders volunteer Saikat Chakrabarti explained the group’s aims:

“The candidates would be running a unified campaign with a single bold plan to, among other things, fix our criminal justice system, rapidly move to 100 percent renewable energy, end the corrupting influence of money in politics, and invest massively in our industries to end our current income inequality by creating high wage jobs for everyone… We plan to win by running these candidates in a single, unified, presidential-style campaign that will, like Bernie's campaign, be able to focus large amounts of small dollar donors and grassroots volunteer efforts towards a single powerful goal. Our goal is also to create a Congress that accurately represents the demographics, gender, and wealth of Americans.”

For the next several months, progressives must keep in mind the difference between electoral politics and movement politics. Defeating Donald Trump in November is imperative, but so is maintaining a popular movement long after the votes are cast. “Sanders allowed us to realize that there really are millions of us who share similar goals and together we have enough power to outraise and outact our billionaire-backed rivals,” remarked Chakrabarti. “But to actually achieve the changes we want to see, we need to strategize for the long term because this revolution is not going to happen overnight. We should assume that until the actual problems in this country are fixed, the movement and desire to fix those problems is not going to go away. No one person or group saying that the movement should continue is going to keep it going -- the movement is going to continue because we have some very urgent crises in this country, we know that these crises can be solved, and we now see that the people actually do have the power to solve them.”

Sanders’ legacy will be determined not in the next few months, but in the years ahead; and if his supporters remain as committed to the cause in the future as they are today, then the senator’s legacy is in good hands.