America's great mistakes: Has everyone forgotten that the Vietnam and Iraq wars were unnecessary, stupid and destructive?

Trump's flap with the Khans over "sacrifice" misses a crucial question: Sacrifice for what? 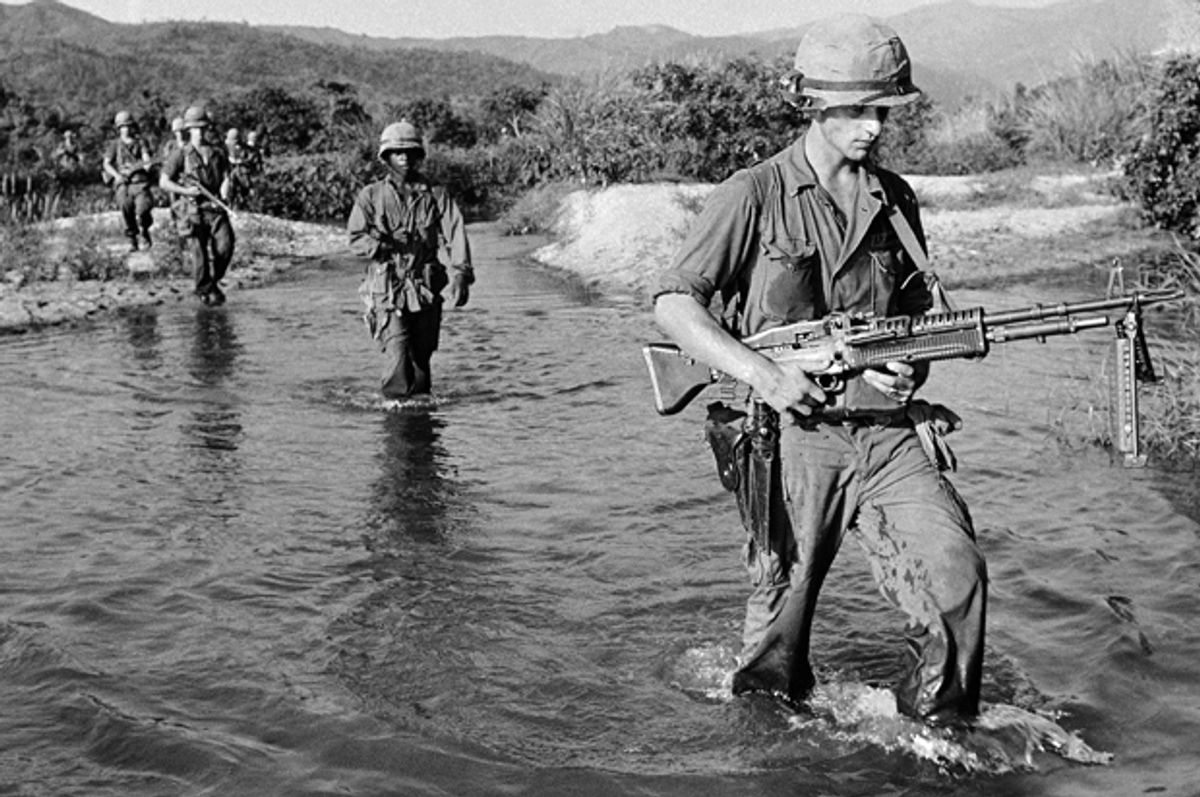 It is always equally nauseating and amusing to see America, an individualistic country, get in touch with its inner Marx and transform into a nation of collectivists whenever discussion of war rises to the level of unavoidable noise pollution. “The pursuit of happiness” mutates into “give your life for your country” with little scrutiny of the nobility or necessity of the military misadventure at hand.

Ever since Donald Trump, in an act of stupidity and indecency now becoming characteristic, spoke ill of the Khan family, whose son died in the Army during the Iraq War, the entire country has communicated a pro-military mindset that papers over the truth regarding America’s foolish and lethal wars in Vietnam and Iraq.

It is basic courtesy and kindness to express sympathy for anyone who has to bury a child, and to demonstrate respect for anyone who suffers injury or dies in war, but in an understandable and natural urge to honor the grief of the Khans, the Democratic Party, major media figures and Republicans desperately trying to distance themselves from the traveling disaster of Donald Trump have dragged out the big, rancid words “service” and “sacrifice.” These words act as censors against honest evaluation of American foreign policy. Throughout the rush to give the Khan family the regard they deserve and that Trump could not offer, it is disturbing to see almost no acknowledgement of the reality that their son, along with 4,485 other Americans, died in a war that should have never taken place. Hundreds of thousands of Iraqis also died, and many more sustained life-altering wounds and trauma, but Americans are never much for counting the casualties their country creates, rather than endures.

As much as Trump should apologize to the Khan family for his rude and thoughtless remarks, shouldn’t the architects and administrators of the war that killed Humayun Khan also apologize?

The failure to find weapons of mass destruction in Iraq, the lack of any operative connection between Saddam Hussein and Al-Qaeda, and the creation of a terrorist playground in place of a once stable, albeit oppressive and miserable, country has led the overwhelming majority of Americans to view the war as a “mistake” and “not worth it.” The Iraq War, like the Vietnam War before it, was unnecessary, stupid and destructive. A rational observer who just awoke from a coma the week before the Democratic Convention would have little awareness of the blunder and crime of the Bush administration, given that for the past week, the entire country has spoken about the optional failure of policy as if it was World War II.

When the words “serve” and “sacrifice” populate political dialogue, it becomes crucial to ask, serve what and sacrifice for what?

Was the war in Iraq launched and managed to serve the edification of neoconservative theorists? Did the deceased sacrifice for the reelection and approval ratings of George W. Bush? Were all the sacrifices of life, health and treasure made for the execution of an abstract geopolitical strategy that did not succeed?

To ignore the consequences of war, fail to investigate the causes of war, and reduce all discussion of war to the bravery and selflessness of those who fought it is to unlock the door leading to the next war.

In a turn of tragic irony, the war in Iraq is proof of the poison in simplifying all conversations about military conflict to the abstract concepts of collective nationalism – “hero,” “service,” “sacrifice.”

The United States had a great window into its past with the Vietnam War, and although there a number of differences between intervention in a Southeast Asian civil war and the occupation of an Arab country, anyone who bothered to look through that window could have forecasted much of the folly and fatality of Iraq. Instead, Americans boarded the window, tied yellow ribbons around their eyes, and proved the accuracy of Gore Vidal’s assessment of the country as the “United States of Amnesia.”

The dementia continues to worsen American functionality as political debate now shifts focus to Donald Trump’s lack of “service” in the Vietnam War. Much like George W. Bush and Bill Clinton, he acquired deferments to avoid the draft, and in doing so, successfully managed to stay out of Vietnam.

Americans, one assumes, should express outrage that someone did not risk his life to help test the truth of the Domino Theory, or come home with his legs blown off so that Nixon wouldn’t lose face.

58,000 Americans and millions of Vietnamese died in a war that history now accepts was wrong, disastrous and, according to the Pentagon Papers and Robert McNamara, was based on lies.

My father is a Vietnam veteran. He has suffered severe heart problems for most of his adult life due to Agent Orange exposure in Vietnam. I wish that he had found a way out of his “service,” and, if the polls are trustworthy indicators of public opinion, most Americans now wish we had never gone to war in Vietnam or Iraq.

As the old expression goes, “Wish in one hand and shit in the other...” The wish that my father was entirely healthy, and that 58,000 of his generation had not died, just like the wish that Humayun Khan was still alive, will get everyone nowhere.

The United States can only prevent the future waste of life through the prevention of more war. Recognition of the real nature of American foreign policy, and the true catastrophe of its past wars, is the inescapable prerequisite for peace.