The paradoxical campaign of Donald Trump: Why his many contradictions and flip-flops don't matter 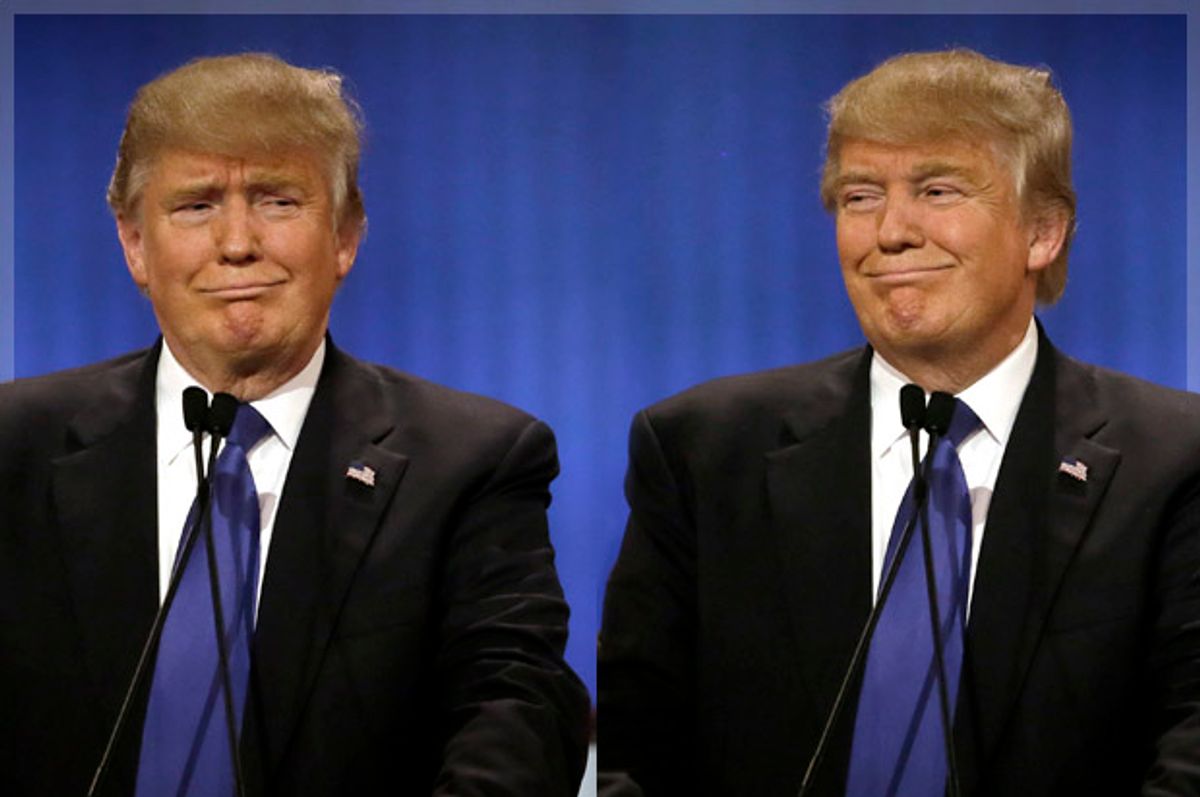 The myriad contradictions of Donald Trump's presidential campaign have become so clear and apparent in recent weeks that even his most partisan sycophants have to be wondering to themselves (not out loud, of course) whether their leader actually has any genuinely held beliefs. While it’s no secret that Trump has a long history of flip-flopping — from his shift on controversial issues like abortion and gun control to his ever-changing opinion of Hillary Clinton (whom he lavished with praise for many years before his presidential run) — the contradictions have become so pervasive lately that even Karl Marx would have been confounded.

Consider the candidate’s selection of Gov. Mike Pence as his running mate. Trump has railed against free trade deals like NAFTA and the Trans-Pacific Partnership (TPP) throughout his presidential campaign, yet the man he chose to be his vice president has never seen a trade deal he hasn’t liked. Every “stupid,” “horrible” and “disastrous” trade deal denounced by Trump over the past year has been wholeheartedly supported and championed by Pence.

The Indiana governor was also a strong supporter of the Iraq War, and voted for it as a congressman — as did Hillary Clinton as a senator from New York. But in an interview with "60 Minutes" last month, Trump said that he doesn’t care about this fact in regards to Pence because it was “a long time ago,” people were misled, and “he’s entitled to make a mistake every once in a while.” When it came to Clinton, however, this fair assessment was not applicable (apparently women are not as entitled as men to make mistakes every once in a while).

Like all human beings, Trump is large and contains multitudes; but unlike most adult human beings, he seems to lack basic critical thinking skills. The man’s self-contradictions are legion: he sees “NATO as a good thing,” yet he think’s it’s “obsolete”; he has claimed not to “condone violence in any shape,” yet he encourages violence against protesters at his rallies; he has professed his love for Mexican people while simultaneously scapegoating Mexican immigrants; he has bragged about self-funding his campaign, only to reverse course; he has said that he could eliminate the United States’ debt in eight years as president, even while his proposed tax plan would, according to various analyses, add more than $10 trillion to the debt in a decade; it goes on and on.

Beyond his many contradictory positions and statements, Trump is also an extremely paradoxical figure. A wealthy real estate tycoon born into great wealth who is seen by many as an archetypal common man with his unsophisticated (and often vulgar) demeanor (his son has called him a “blue-collar billionaire”). Moreover, the billionaire has made much of his wealth by scamming and hustling the same working and middle-class people that he now claims to fight for (e.g., Trump University, his casino ventures), and was a big donor himself before becoming an anti-establishment politician.

Incredibly, these contradictions and flip-flops never seem to hurt Trump (as they would any other candidate). This can be mainly attributed to the fact that his political success is more a product of his attitude and image than his policies and political positions. “Trumpism” is an Us vs. Them mentality, not a coherent ideology or political philosophy. This mindset is recurrent in past reactionary and populist movements in American history.

In his essay “From Founding Violence to Political Hegemony: The Conservative Populism of George Wallace,” associate professor at the University of Oregon Joseph Lowndes explores the populism of the infamous Alabama governor and frequent presidential candidate, who, like Trump, was also a paradoxical figure replete with contradictions:

“[George Wallace was] an agitator who migrated between contradictory political positions. [His] paradoxes were legion: as the simultaneous embodiment of the ‘average citizen’ and a self-conscious caricature of a redneck, he was a politician with whom many Americans could identify even as they differentiated themselves from his image. He praised the police and called for stronger law enforcement and more punitive sentencing, yet he was always associated with disruptive violence himself… And although he always claimed he was not a racist, racial demonization was fundamental to his success.”

Like Wallace, Trump is a demagogue and an opportunist who claims to fight for the people and against the country’s elites. “Big business, elite media and major donors are lining up behind the campaign of my opponent because they know she will keep our rigged system in place,” declared the billionaire in his acceptance speech at the Republican National Convention two weeks ago. “She is their puppet, and they pull the strings. … I AM YOUR VOICE.”

It is of little importance that Trump’s actual policies (at least those that he has put forth) would hurt the people he professes to fight for — once again, it is his Us vs. Them mentality that matters to so many of his supporters.

Over the past week, Trump’s increasingly erratic and “un-presidential” behavior has started to disturb and worry many Republican Party officials (yes, it’s hard to believe that they’re only now getting worried). And if someone had been living under a rock for the past year, it would seem entirely plausible that his campaign was about to implode. But Trump has been on the verge of political implosion for some time now — yet here he is, the still competitive Republican nominee for president. The contradictions of the Trump campaign are now so ubiquitous that they have been rendered almost meaningless; the candidate's success in November will depend not so much on his political positions as on the American public’s state of mind. If fear and resentment prevail over rationality and tolerance, Trump's long-shot presidential bid could change American history.