Desperate Donald: He's plummeting in the polls, so he's turning up the trash talk

Trump's campaign is tanking, and his only recourse is to unleash insane and unhinged attacks on Hillary 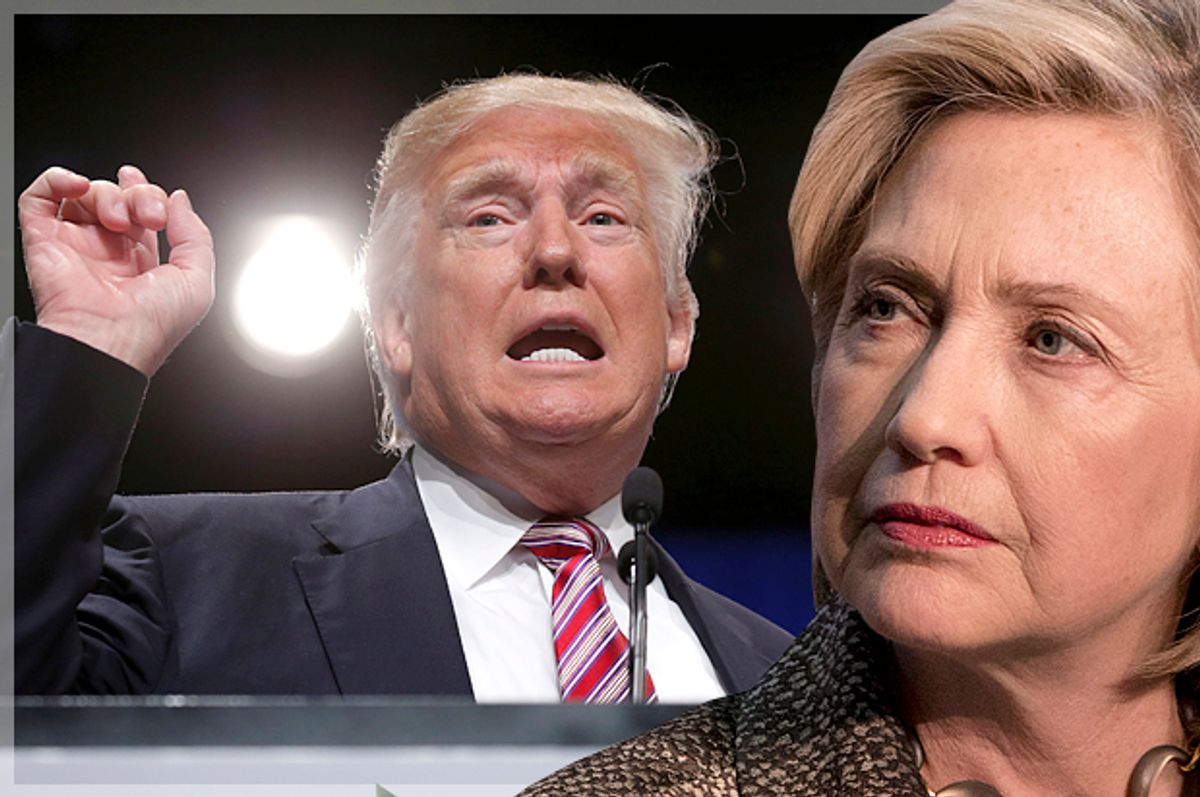 Donald Trump's bad couple of weeks has apparently convinced him that the best way to beat Hillary Clinton is to adopt the "I know you are but what am I" projection strategy. The growing realization that he's unfit, unhinged and uninformed has caused his poll numbers to plummet and hers to rise so he assumes that if he accuses Clinton of the same thing he'll get the same results she's gotten.

He road-tested his new strategy over the weekend:

"Unstable Hillary, she lacks the judgment, temperament and moral character to lead this country," Trump said at his rally. "She is a totally unhinged person.”

"Her greatest achievement is getting out of trouble, it's true," Trump said, prompting chants of "lock her up."

"She is a horrible, horrible human being," Trump said. "She’s incompetent, and I don’t think that you can even think of allowing this woman to become the president of the United States."

He turned the accusation that his behavior wasn't presidential against Clinton by reviving a vicious sexist twist he's used in the past:

It's undoubtedly true that Clinton does not look like the image of a president to many people.  But then Trump doesn't exactly look like someone we've ever seen on our currency either.

His campaign took the "unstable" charge to a new level with a web ad that appears to have been made by Trump's 10-year-old son as a summer school project. Playing on the "short circuit" phrase Clinton used in her press conference this week, the ad shows Clinton as a "robot" with her head spewing smoke.

"She took a short-circuit in the brain. She's got problems. Honestly, I don't think she's all there."

"She is a totally unhinged person. She's unbalanced. And all you have to do is watch her, see her, read about her," Trump said during a campaign rally in Windham, New Hampshire, Saturday evening. "She will cause - if she wins, which hopefully she won't - the destruction of our country from within."

"Crooked Hillary said loudly, and for the world to see, that she "SHORT CIRCUITED" when answering a question about her e-mails. Very dangerous!"

"Anybody whose mind "SHORT CIRCUITS" is not fit to be our president! Look up the word "BRAINWASHED.

It's pretty clear that Trump is the one who needs to look up the word brainwashed because he is obviously confused about its meaning.

As Salon's  Michael Garofalo noted yesterday, Trump's adviser Roger Stone and his conspiracy theorist pal Alex Jones have been pushing the notion that Clinton has a brain injury for some time and this is just Trump's puerile way of bringing that ugly rumor into the mainstream.

They aren't the only ones. Dave Weigel wrote about  a full blown right-wing "Hillary has brain damage" conspiracy yesterday in this piece for the Washington Post that is downright byzantine. There are many layers to the story  but the most recent "evidence" concerns an incident in which one of Clinton's secret service agents rushed to the stage when a protester approached:

To [conspiracy theorist] Cernovich, it was clear that Clinton was "completely frozen" and "lost control of her executive functions/pre-frontal cortex." She actually riffed on the protesters, telling them to protest Donald Trump's sons, who are proud hunters.

Lest you think this foolishness is confined to the outer reaches of the right wing fever swamps, Sean Hannity  devoted an entire segment to discussing the thoroughly discredited nonsense on his show last night. He even invited the two house doctors to weigh in which they dutifully did, much to their shame.

Trump's attacks on Clinton's mental state are obviously yet another case of projection. If there's anyone who is suspected of having serious issues it's Donald Trump. The list of articles trying to figure out exactly what makes him tick is very long. In fact, there has never been a presidential candidate so thoroughly analyzed from afar by mental health professionals and amateur analysts alike. (This epic psychoanalysis compares Trump to Andrew Jackson!)

The man is ... unusual. His erratic, juvenile behavior and rank dishonesty combined with the overweening arrogance and total lack of preparation for the job naturally leads to a lot of speculation. But the likely reason Trump has just now decided to turn that back on Clinton is because of the polls: 70 percent have anxiety about a Trump presidency and 67 percent think he lacks the personality and temperament it takes to serve effectively. And according to a recent Pew Poll, that's what people care about in this election. Even he's not so far gone that he can't see the problem and it clearly has him flummoxed. Over the weekend he seemed to be thinking out loud on the stump when he said:

If the stakes weren't so high you'd have to feel sorry for him. That's pathetic.