Obama's flimsy war justification: The president has relied on a 15-year-old law for launching attacks 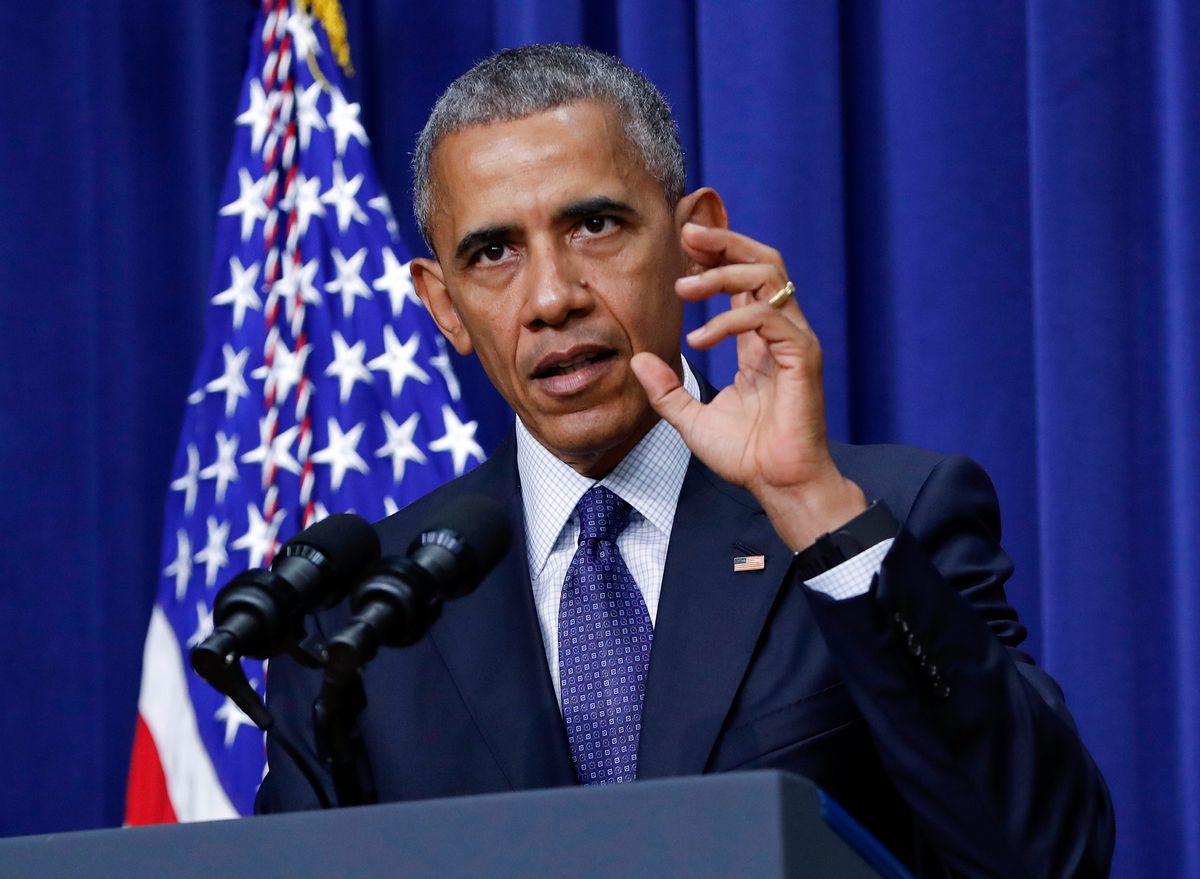 FILE - In this July 22, 2016 file photo, President Barack Obama speaks in the South Court Auditorium of the White House complex in Washington. After a slow start, it appears increasingly likely that the Obama administration will hit its goal of admitting 10,000 Syrian refugees into the United States before the end of September. (AP Photo/Pablo Martinez Monsivais, File) (AP)
--

A 15-year-old piece of legislation authorizing retaliation for the September 11th attacks is now being invoked by the Obama administration to greenlight a major military campaign against the Islamic State in Libya, a country already devastated by a disastrous western intervention in 2011.

Known as the the 2001 Authorization for Use of Military Force (AUMF), the legislation has been referenced 37 times total by the Bush and Obama administrations to justify deployments, bombings, military action, tribunals and imprisonment in at least 14 different countries: Afghanistan, Georgia, Yemen, Djibouti, Cuba, the Philippines, Kenya, Ethiopia, Eritrea, Iraq, Somalia, Libya, Turkey and Syria.

President Obama has acknowledged that the 2001 AUMF is so vaguely defined and broadly interpreted that it is drawing the United States into unnecessary global wars.

“The AUMF is now nearly 12 years old,” the president said in a May 2013 address. “The Afghan war is coming to an end. Core Al Qaeda is a shell of its former self. Groups like AQAP must be dealt with, but in the years to come, not every collection of thugs that labels themselves Al Qaeda will pose a credible threat to the United States. Unless we discipline our thinking, our definitions, our actions, we may be drawn into more wars we don’t need to fight, or continue to grant presidents unbound powers more suited for traditional armed conflicts between nation states.”

But on Monday, the Pentagon announced that it is unleashing a bombing campaign against ISIS in Libya, at the request of a questionable “unity” government, and despite the fact that the last U.S./NATO intervention contributed to the rise of the Islamic State. Pentagon press secretary Peter Cook said the campaign does “not have an end point” at this time.

This is not the first time the 2001 AUMF has been invoked to intervene in Libya. It was also referenced regarding a bombing in June 2015 and military action in the country in October 2013.

Obama is now referencing this authority even though ISIS did not exist at the time the 2001 AUMF was passed. Furthermore, as Alex Emmons at the Intercept pointed out, “ISIS and al Qaeda are sworn enemies,” making it unclear how the 15-year-old legislation granted authority to bomb them.

If Obama’s interpretation of presidential war-making powers seems overly broad, it is in line with the past 15 years of bombings, deployments and renditions under both the Bush and Obama administrations. According to a May 2016 memo from the Congressional Research Service (CRS), which was requested by the office of Rep. Barbara Lee (D-Calif.) and emailed to AlterNet, Obama’s reference to the 2001 AUMF is on par with his predecessor Bush. The CRS said it “has located 37 relevant occurrences of an official record, disclosed publicly, of presidential reference to the 2001 AUMF in connection with initiating or continuing military or related action (including non-lethal military activities such as detentions and military trials). Of the 37 occurrences, 18 were made during the Bush Administration, and 19 have been made during the Obama Administration.”

The 2001 AUMF has been used to justify the most notorious war on terror human rights violations, including the incarceration of men at the Guantanamo Bay military prison, where they have faced torture and indefinite detention without charge or trial. Critically, the 2001 AUMF has served as the key justification of Obama’s new war against the Islamic State after his attempts to attain congressional approval for the military intervention floundered.

Lee, the only member of Congress who voted against the 2001 AUMF, told AlterNet she blames House Speaker Paul Ryan (R-Wisc.) and members of Congress for blocking a meaningful debate and vote on the war. “For nearly 15 years, Congress has ignored its constitutional responsibility to oversee our nation’s military operation,” she said. “Today, we are involved in yet another Middle East war, one that continues to expand, and still Congress has not debated or specifically authorized this war.”

Others say Obama, who was elected in 2008 on an antiwar ticket, holds key responsibility.

“Although President Obama campaigned for the presidency on a promise to end wars, he has authorized U.S. military interventions in seven countries in the last seven years: Iraq, Afghanistan, Pakistan, Yemen, Somalia, Syria and Libya,” Raed Jarrar, government relations manager for the American Friends Service Committee, told AlterNet. “Rather than being the president who ended wars, Obama’s legacy might be justifying endless wars and creating presidents that would further demise the role of Congress in declaring wars in the future.”

Either way, it is clear that the precedents of both Bush and Obama in interpreting the 2001 AUMF will set up a Donald Trump or Hillary Clinton presidency to do far more harm. Meanwhile, the people of Libya will be forced to pay the price for another U.S. military intervention.