While Trump attempts to "pivot" to the economy, Hannity wonders if Khan "was purposely hiding his real views" 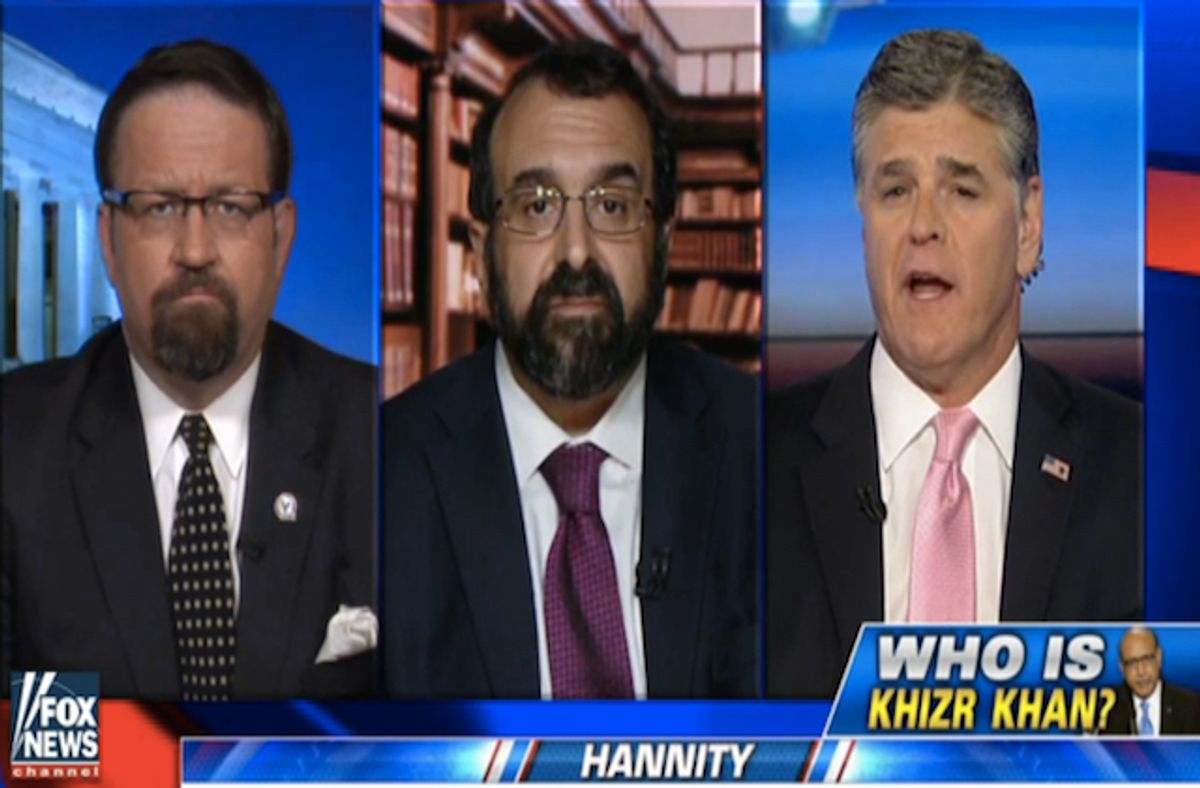 Just last week, Fox News host and Donald Trump sycophant Sean Hannity was berating "the mainstream media’s shameless pandering to the Clinton campaign," bemoaning the broadcast news coverage devoted to the Muslim American Gold Star parents Khzir and Ghazala Khan after they were attacked by the Republican presidential nominee for daring to speak out against his anti-Muslim rhetoric and policy proposals during last month's Democratic National Convention.

"ABC, CBS and NBC should be ashamed of themselves," Hannity wrote on his blog, noting that the mother of an American contractor who died in Benghazi in 2012 was not given equal airtime. Of course, Hannity made no mention that his network was the lone cable news outlet that failed to air Patricia Smith's address to the Republican National Convention live -- as Trump was stepping on her moment with his own call-in interview to Fox News.

But even more odd than the usual dose of Fox News hypocrisy, is Hannity's own role in elevating the back-and-forth between a presidential candidate and the Gold Star parents.

While simultaneously complaining of the librul media's focus on Trump's unprecedented attacks on a military family (aside from his earlier swipe at Vietnam War POW John McCain), Hannity has also kept the focus on the Khans -- even after Trump has intimated he was ready to move on.

"There’s a lot of controversial findings that I’ve dug up about Mr. Khan," the Fox News host previewed on August 3, while multiple reports suggested that even those closest to Trump were frustrated with his continued attacks on the couple. But perhaps buoyed by the candidate's own insistence that he did not nothing wrong and had no regrets about the entire Khan fiasco, Hannity soldiered on.

"The media has been very quick to praise Khizr Khan. He's the man who attacked Donald Trump at a speech at the DNC last month, but who exactly is Mr. Khan?," Hannity asked on his show Monday, following up on his promised "investigation" even after the Trump campaign had ceased brining up the Khans unprovoked.

"During one recent interview, he said there's no such thing as Sharia law. Really?" Hannity asked incredulously. In a segment devoid of any so-called "controversial findings" and even lacking in a clear suggestion, Hannity simply hosted noted anti-Muslim extremists to essentially bash Mr. Khan and spread paranoia about Sharia law even as his preferred candidate seeks to "pivot" to a more presidential debate on the economy.

"Do you think he was purposely hiding his real views now because he was so advanced in this political narrative":