Get ready for "The Get Down": Baz Lurhmann's valentine to hip-hop and the 1970s Bronx is overstuffed, but finds its brilliant beat 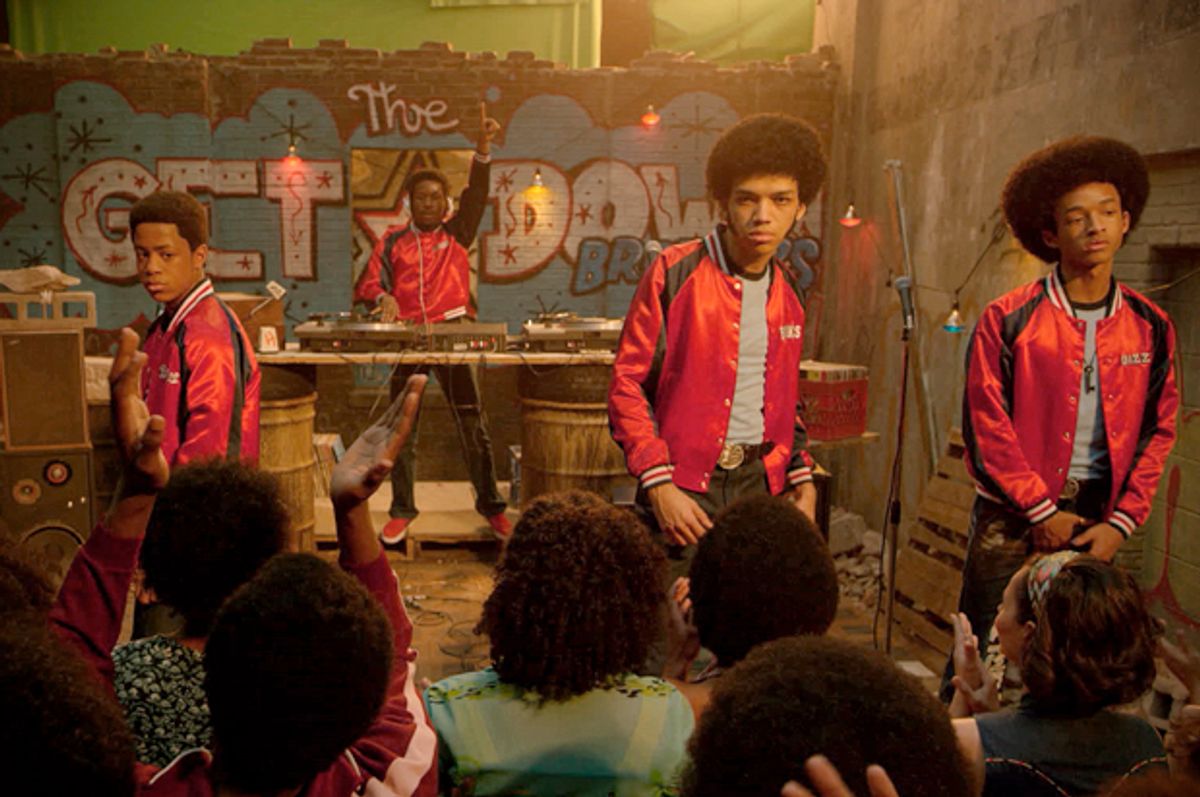 Nearly the close of “The Get Down’s” first episode, the heroic Shaolin Fantastic (Shameik Moore) takes his new crew, led by a poet he nicknames Books (Justice Smith), to the roof of his Bronx hangout. From there, he reveals to them the Three Kingdoms: to the West, the Land of DJ Kool Herc. To the South, the domain of Afrika Bambaataa and the Zulus. And under their feet, the land of Grandmaster Flash.

Those names are legend to people who know hip-hop’s history — they’re the true originators of the genre. Considering that this moment plays out in the Bronx of 1977, Shaolin’s description may seem odd. History reminds us that 1977 was the year that a blackout in New York resulted in widespread looting and violence; films portray the city as blighted by crumbling structures and terrorized by gangs — not at all like the mystical land Shaolin speaks of.

Unless, that is, you view that scene with a youth’s perspective. Rooftops are magic to a city kid; they allow the experience of rising above the claustrophobic clutter and clang of street-level life. Impatient car horns and human tension sound miles away when you’re halfway up to the sky.

That moment and others like it — Shaolin leaping over cars to escape gangbangers, or jumping between tall, burning buildings — lend “The Get Down’s” story an epic quality, buoyed by comic book heroism and aspirations of martial arts-style mastery. All of this is as series creator Baz Luhrmann intended.

“The Get Down” also happens to be Luhrmann’s first dive into serialized entertainment, and it shows. The premiere clocks in a few seconds shy of an hour and 33 minutes long, the length of your average cinematic feature.

That would be fine if the director made defensible use of every second of that debut, and even then, it’s a risky way to an introduce a 12-chapter first season. (Netflix is airing season one in two parts, with the first six episodes dropping Friday and the second making its streaming debut in 2017.) This is not the case.

In fact, an hour and 12 minutes pass before the main players connect, propelling the plot definitively forward from there. That’s also the point at which we first hear the titular phrase. "The Get Down" is a party, Shaolin explains, where skillful DJs lord over wild, sweaty dance mobs, and the first MCs proved their worth. This also is where we meet Grandmaster Flash (Mamoudou Athie), Shaolin’s sensei and master of turntable alchemy.

A tangle of personalities and plot threads also unintentionally illustrates “The Get Down’s” secondary meaning as a turntablist’s device: the short, beat-heavy music sample DJs mined from within a disco or R&B track, isolated and looped between turntables. “The get down,” Flash explains, is that few seconds of rhythmic bliss the B-Boys rock to, a beat that goes on and on and on.

The rest — the lyrics, chorus, the soul-stirring vocals — is dismissed as “the wackness.”

Following that philosophy, there’s about 20 minutes of “get down” in the structurally cumbersome premiere.

Filtered through Luhrmann’s baroque style, and with the guidance of veteran music journalist Nelson George serving as supervising producer, “The Get Down” is a valentine to the ragged-edged Bronx of the late ‘70s.

It’s a setting steeped in economic decline that also happens to be a close-knit community filled with young African-Americans and Latinos hungry to create, rise and make their mark. Disco rules this brown-skinned paradise, and the overarching paradigm is informed by kung fu films and cartoon heroes.

Leading us into the story is Ezekiel Figuero, a gifted poet lovesick for his friend Mylene (Herizen Guardiola), daughter of a conservative minister (Giancarlo Esposito). But Mylene is an extraordinary vocalist with aspirations of becoming the next Donna Summer, and has no time for Zeke’s romantic overtures.

Pulling Zeke in a different direction are the philosophical Dizzee (Jaden Smith), a graffiti artist who paints under the name Rumi 411, as well as brothers Ra-Ra (Skylan Brooks) and Boo Boo (Tremaine Brown Jr.). The boys are enjoying a carefree summer when a fateful night connects their paths with Shaolin Fantastic, a mysterious b-boy legend due to his stealth, speed and artistic skills.

Fat Annie runs the drug game in the Bronx, but another unscrupulous business man and politician, Francisco “Papa Fuerte” Cruz (Jimmy Smits) has aspirations to revitalize the neighborhood, even if it means getting his hands dirty to do so. Mylene also happens to be his niece.

Colorful dance numbers, soaring musical interludes and gunplay are only part of what viewers are tasked to sort within that first 93 minutes. Luhrmann also zips though character development via quick cuts between street scenes, apartment soliloquys, back alley confrontations and club numbers, often within a single sequence. It’s overstuffed, in other words.

But you’d be wrong dismiss the rest as wackness.

Once “The Get Down” finds its beat, it achieves creatively transcendent peaks both stylistically and through an engaging, optimistic story informed by a sense of destiny, love and devotion — to hip-hop, to community and to art. Many of those moments stand out in the two subsequent episodes first made available to critics, neither of which were directed by Luhrmann, that demonstrate the value of an economic plot structure.

Also aiding “The Get Down’s” emotional poignancy is a narrative device that frames each episode with scenes from a glitzy Madison Square Garden concert in 1996 starring, in a foreshadowing move, an emcee named Mr. Books (played by "Hamilton" star Daveed Diggs), spitting lyrics written by Nas, an executive producer.

Later episodes also spotlight the cast’s rousing performances. Those of Justice Smith, Moore and Abdul-Mateen in particular are moving enough to make slogging through the drama’s excesses worthwhile. Some sequences are devastating in their beauty, particularly during the famed blackout  — which was crucial to the birth of hip-hop, since most DJs looted equipment they could not have afforded otherwise.

In that scene, vocals and lyrics softly merge while chaos breaks out in the streets, marking that important moment in time with moving visuals and an unforgettable soundtrack. Moments like these demonstrate “The Get Down's” great promise.

Some viewers may nevertheless find it impossible to overcome a tonal disconnect between “The Get Down’s” gritty tale and its fantastical, color-saturated visuals. That’s understandable. But as the narcotic seduction of disco’s melodies melt into the sweat funk of the show’s breakbeats, it becomes clear that something special is simmering in this drama, regardless of its overly-gilded elements.

To quote a phrase from Rumi that's spray-painted in glorious hues on a passing subway, “where there is ruin, there is hope for a treasure.” “The Get Down’s” introduction may be a bit of a wreck, but there’s enough gorgeousness to earn the viewer’s patience. Keep digging through the rubble — we promise there’s some brilliance buried under there.

Baz Luhrmann Hip Hop Netflix The Get Down Tv