Decoding Obama's playlist: Inside his summer jams, a hint of what we'll miss most about him 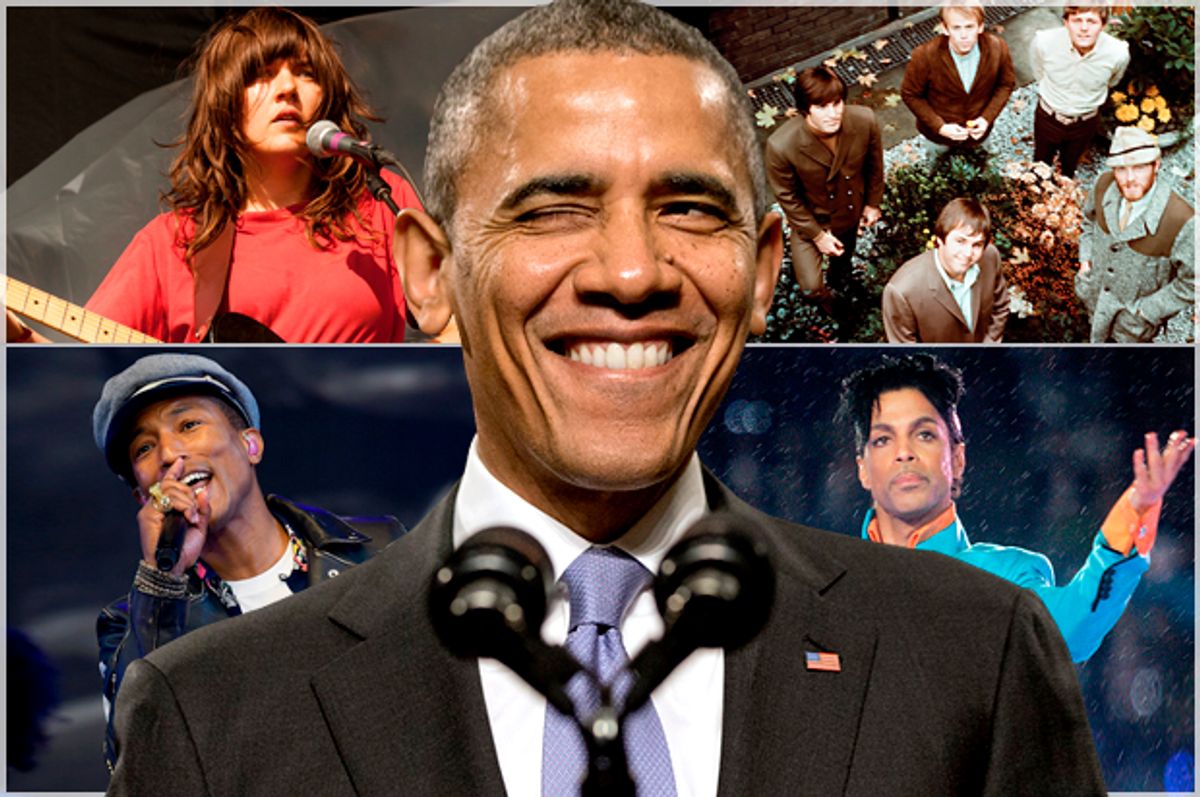 Presidents define themselves in all different ways, and with only a few months left in office, President Obama has dropped a summer playlist (or rather, two — one for daytime listening and one for the evening) that will be among his final statements before leaving office. Obama has seen his approval ratings go higher than usual this year, and he’s been in a don’t-give-a-damn phase of his presidency, but few politicians do anything without calculating how it will land. This release, for instance, may’ve been timed to head off Donald Trump’s accusation that Obama was “the founder of ISIS.” In any case, it’s worth looking at as a document of how the president wants to see himself as well as how we wants us to see him.

At the most general level, this is a smart, wide-ranging list, with a mix of hip-hop, rock, jazz and funk. There’s not much on it that’s obvious or overplayed, and it all tends to be music that someone who really listens might like: This is not just what TV commercials and big marketers beam at us.

And while it’s hard to know how much this was put together by a committee for image-massaging, it certainly looks like something a guy like Obama — an educated, cosmopolitan black man in his early 50s who has cared about music for a long time — would really listen to. That is, while it’s fashionable in some ways, it doesn’t seem to be straining to capture “what the kids are listening to.”

Let’s break it down a little more specifically.

Given the enormous enthusiasm with which GOP candidates have embraced rap, Obama’s list may have less hip hop than, say, Marco Rubio’s equivalent might have. Generally, Obama has chosen hip hop from the smarter, less violent side of things. Chance the Rapper and Common also have the advantage of being, like Obama, from Chicago.

Obama’s hip hop selections have two notable omissions: Kanye West and the Beyonce. Obama may simply not be moved by the often-abstract music of his fellow Chicagoan. And the music from “Lemonade” may be too politically confrontational for Obama to feel comfortable putting it on his list. (This said, his list is not free of political or protest-driven content.) It may also come from his interest in not picking anything obvious, and at this point West and Beyonce are pretty hard to escape. (Obama has also famously called West "a jackass.")

Instead, he’s gone for critically acclaimed but not ubiquitous figures. Leon Bridges is not only a talented neo-soul singer whose style recalls Sam Cooke and the early Marvin Gaye, he’s given, like his models, to protest songs. (The pick here, “Smooth Sailin’,” is not one of them.)

The Bridges choice shows a larger theme here — Obama’s preference for a kind of retro cool no matter what the genre. Even some of the rap choices are retro, coming from artists informed by jazz and soul music. D’Angelo (“Lady”) and Anthony Hamilton (“Do You Feel Me”) are hardly identical, and they’re a bit less studied than Bridges, but they’re very deeply rooted in ‘60s R&B. Given Obama’s fondness for Al Green, they’re natural choices.

Same for one of the youngest musicians on the list, Courtney Barnett, the wry Australian whose wry songs are deeply original but also appeal to fans of Liz Phair and ‘60s Dylan.

Obama also makes some smart jazz choices. I’ve found Esperanza Spalding to be a little overrated — the jazz world has been so eager for someone like her that it’s flipped its collective lid despite the fact that her talents are probably not all filled in yet — but “Espera” is one of her most distinctive songs. The other jazz selections are well-known from major artists: Billie Holiday’s rueful “Lover Man,” Miles Davis’s pensive “My Funny Valentine,” and Charles Mingus’s soulful “II B.S.” would not be out of place in a Starbucks on a Wednesday afternoon. They’re also great songs, though, that are capable of turning newcomers on to jazz. (The Nina Simone choice, “Sinnerman,” is a little less familiar and probably not as immediately accessible.)

Did Obama pick Simone and Davis because of the recent movies? Maybe. (For what it’s worth, “My Funny Valentine” comes from a period well before the one portrayed in Don Cheadle’s film.)

When picking an Aretha Franklin song, Obama avoided easy choices likes “Respect” and “I Never Loved a Man,” picking the early ‘70s song “Rock Steady,” which is not hard to imagine provoking a family dance party.

And anything by Prince would be fine given the Purple One’s much-lamented departure. “U Got the Look” is a smart choice — catchy and not overexposed, and coming from perhaps Prince’s best album, “Sign o the Times.”

There’s only one place where the president picks a very famous song by a household name-size artists: There are better Beach Boys songs than “Good Vibrations” — and many that were not used by television commercials — but, hey, for a summer playlist, that’s not a bad choice.

Tone-wise, the songs he’s selected range from the sunny, mellow groove of the Aretha number to the complicate despair of Wale’s “LoveHate Thing,” from the extroverted fun of Janelle Monae’s “Tightrope” to the wistfulness of War’s “All Day Music.”

These two playlists, then, show us some of the qualities a lot of us will miss when Obama has left office. It shows the ability to listen to other people’s points of view: His taste on display here is not monochromatic the way I imagine that of a more rigid politician, whether George W. Bush or Bernie Sanders, would be. It's generationally hybrid, with a bit of Boomerism and a bit of Gen X attitude. It does not seem stage-managed as fiercely as a Hillary Clinton list would likely be. It’s not hostile and ignorant the way a Trump playlist would be. And it sounds like someone who really cares about music and wants to share some of his fervor.