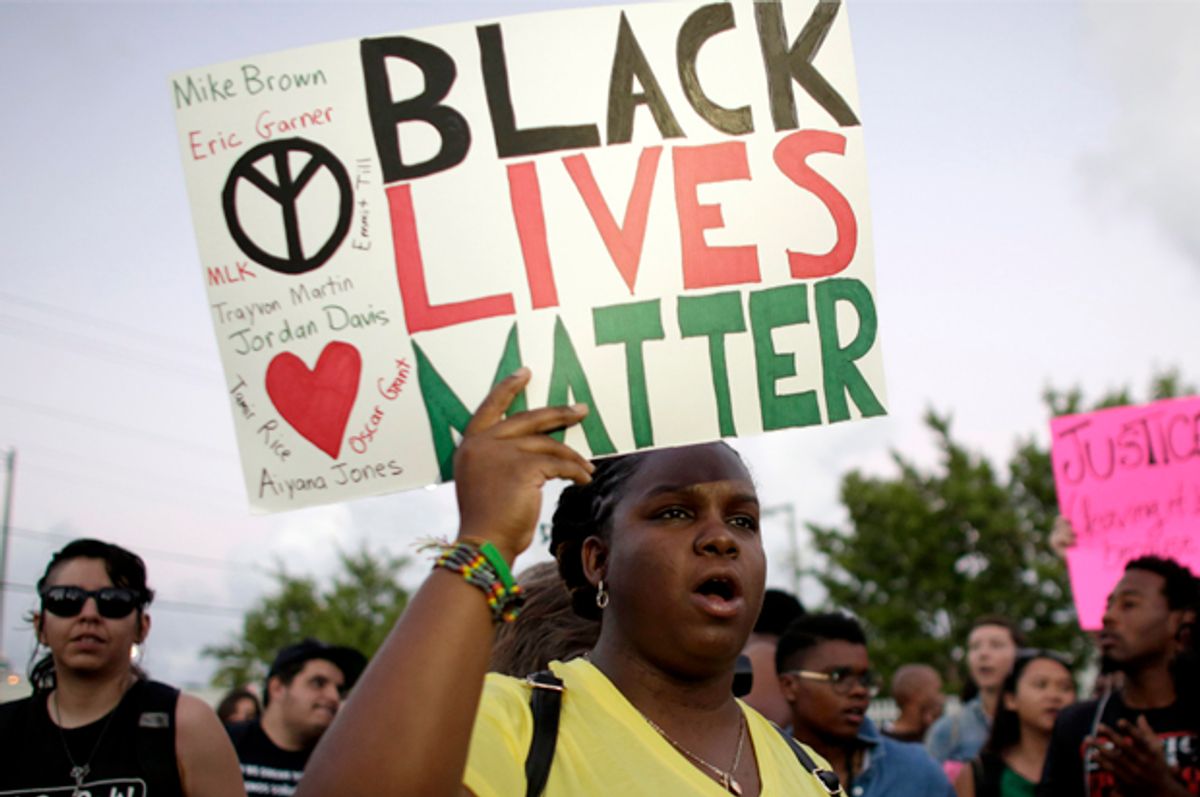 The Movement for Black Lives released its much-anticipated platform on Aug. 1. The document thoroughly details demands across a wide variety of issues, each of which is accompanied by concrete strategies for achieving these goals.

Perhaps the most subversive part of the platform is its scathing critique of what it describes as the "U.S. empire," and its call for international solidarity and coordinated direct actions with liberation movements around the world. Here the movement proposes some of its most progressive, even revolutionary, ideas.

"America is an empire that uses war to expand territory and power," the Movement for Black Lives states clearly. "American wars are unjust, destructive to Black communities globally and do not keep Black people safe locally."

The platform calls for cutting the U.S. military budget by 50 percent, closing the more than 800 U.S. military bases around the world and pulling back U.S. troops. This money, the Movement for Black Lives says, should then be re-invested in communities that have been harmed by the U.S. government.

"Resources and funds needed for reparations and for building a just and equitable society domestically are instead used to wage war against a majority of the world’s communities," the platform stresses.

And this invest-divest policy should apply globally. The Movement for Black Lives demands reparations not only for Black Americans, but also for "countries and communities devastated by American war-making, such as Somalia, Iraq, Libya and Honduras."

The Movement for Black Lives platform was drafted by a "united front" of more than 25 groups, including the Black Lives Matter Network, Dream Defenders, Color of Change and more. An additional more than 35 organizations joined them in endorsing the platform.

Salon spoke with Ben Ndugga-Kabuye, one of the co-authors of the anti-imperialist plank of the platform, and an organizer with the activist group the Black Alliance for Just Immigration.

"We are very much aware that the Movement for Black Lives in the U.S. is part of an international movement that is just as vibrant in Canada, or Colombia, or South Africa or any number of places," Ndugga-Kabuye said.

"What brought us to this particular analysis was understanding that, insofar as the U.S. has a particular role in the world, any platform that we were to put out would have to reflect solidarity not only with Black communities around the world, but also liberation movements more broadly," he explained.

In addition to a drastic reduction in military spending and reinvestment of the saved tax dollars in communities and social services, the platform calls for ending military aid and arms sales to countries and organizations engaging in human rights violations, endorsing the Leahy Law.

Nuclear weapons are mentioned, too. The Obama administration announced that it would invest $1 trillion in tax dollars in revitalizing the U.S. nuclear program over the next 30 years. The Movement for Black Lives instead demands a reduction in the stockpiling of nuclear weapons, so this money can go to helping people.

It also blasts the military-industrial complex for offering "massive profits to private corporations from the death of our global diaspora by handing out massive government contracts to expand US military presence across the globe, while resources for domestic infrastructure and social programs to meet the needs of Black people and working class communities within the US diminishes."

Former military personnel, the platform proposes, can be re-trained for "domestic peace-making roles that redesign and rebuild the country’s polluting and crumbling infrastructure with released funds from war-making." It adds that this new infrastructure plan should be "based on a commitment to a green economy and deep understanding of the threat of climate change."

"The interlinked systems of white supremacy, imperialism, capitalism and patriarchy shape the violence we face. As oppressed people living in the US, the belly of global empire, we are in a critical position to build the necessary connections for a global liberation movement," it says.

"Until we are able to overturn US imperialism, capitalism and white supremacy, our brothers and sisters around the world will continue to live in chains."

The anti-imperialist plank of the platform places particular emphasis on the U.S. military's policies in Africa. It harshly criticizes AFRICOM, the United States Africa Command, which oversees military operations on the continent.

Ndugga-Kabuye stressed that the platform's opposition to what it calls "U.S. militarization of Africa" is a crucial part of the movement.

"We can't write a policy about the Movement for Black Lives without talking about Africa as the central part of that movement. All of us are ultimately from there, and many have ties to the continent," he said.

The platform accuses the U.S. of using the threats of terrorism and Islamist extremism in Africa in order "to expand western colonial control over the region, its people and their resources."

"AFRICOM is a major example of U.S. empire and is a direct threat to global Black liberation," the Movement for Black Lives writes.

The platform calls the U.S. drone war in Somalia "devastating." It condemns the U.S. for fueling violence in the Democratic Republic of Congo and adds, "Not only have U.S. backed African intervention armies committed atrocities but U.S. private companies extract the worlds wealth from Congolese soil."

The Movement for Black Lives also emphasizes the impact of this militarization on women. "Women and the most vulnerable in our communities pay the price of U.S. intervention and the accompanying genocides and civil wars," the platform says.

Ndugga-Kabuye said the plight of African refugees and migrants is especially important.

"We have particular interest in this because we began to do work around the current, ongoing crisis of African migrants across the Mediterranean," he explained, referring to the work of the Black Alliance for Just Immigration.

"And the increasing militarization of Africa is tied to the increased difficulty of traveling across Libya and other parts of North Africa into Europe," he added.

NATO carried out a regime-change bombing campaign in Libya in 2011, which toppled the government and plunged the country into chaos. In the years since, a civil war has devastated the oil-rich North African nation. Extremist groups like Ansar al-Sharia and even ISIS have seized large swaths of the country.

Hundreds of thousands of Libyans have been displaced by the violence. And other African refugees and migrants fleeing violence have traveled through Libya in hopes of traveling across the Mediterranean and seeking asylum in Europe.

As Salon has previously reported, NATO announced plans to impose a blockade on Libya to stop the refugee influx. The refugee rights program director at Human Rights Watch told Salon that the plan likely violates international law, and that the humanitarian situation on the ground in Libya is nightmarish.

"After the imperialistic overthrow of the Libyan government, there was a rise of a number of rebel organizations that now give free reign to smugglers and terrorize migrants — a lot of them Somali, Eritrean, Nigerian and West African — who are traveling across Libya," Ndugga-Kabuye said.

"Not only was it difficult before, but it's much harder now, and it's not unusual to see hundreds of Africans drowning in the Mediterranean every week," he added.

Ndugga-Kabuye said the Movement for Black Lives was obligated to make this an important part of its program. "We had to make sure that we pointed out the brutal impact of those policies and the U.S. and the West's role in creating that dynamic."

Wars on terror and drugs

The Movement for Black Lives platform is also intensely critical of the so-called U.S. "war on terror," which was declared by President George W. Bush after the Sept. 11, 2001 attacks.

"The war on terror has not made us safer and has only increased hopelessness as our fears are realized," the platform declares.

It blasts the U.S. for killing millions of people in the Middle East. The Movement for Black Lives also notes that U.S. military spending has skyrocketed since 9/11, and links police militarization to war and military spending, writing, "State violence within the U.S. is intimately linked with empire and war-making globally."

"U.S. arms and military corporations have made billions of dollars in profit off of waging disaster and destabilization in the Middle East, while increasing western control over the land and resources of the region," the platform says.

It also harshly criticizes the close U.S. alliance with Israel, which it describes as an "apartheid state" that is carrying out a slow "genocide" of Palestinians.

The decades-long U.S. war on drugs is another target. The Movement for Black Lives condemns the war on drugs and its horrific impact on South America.

Black minority groups in Latin America, like the Garifuna, have been especially harmed by U.S. policy, the platform notes. And Dominicans of Haitian descent have endured brutal discrimination and mass deportations.

The Movement for Black Lives slams the 2009 U.S.-backed military coup in Honduras, which replaced a left-wing leader with a brutally repressive right-wing regime, and opposes "U.S. trained militaries that have devastated the region."

It also writes of "the disastrous impact" of "continual U.S. intervention that has filled modern Haitian history with coups and violence."

"The Movement for Black Lives is an international effort, and we're very much in solidarity with our folks, our communities, our liberation movements in Palestine, to Somalia, to Canada, to Colombia, Brazil and Haiti," Ndugga-Kabuye told Salon.

He added, "We want to make sure our folks around the world know we love them and are committed to them."