Real "big government" and "tyranny" in action: The Baltimore police are running amok and conservatives are silent

Where is the right's outrage over the Baltimore police department's broad abuses of power? 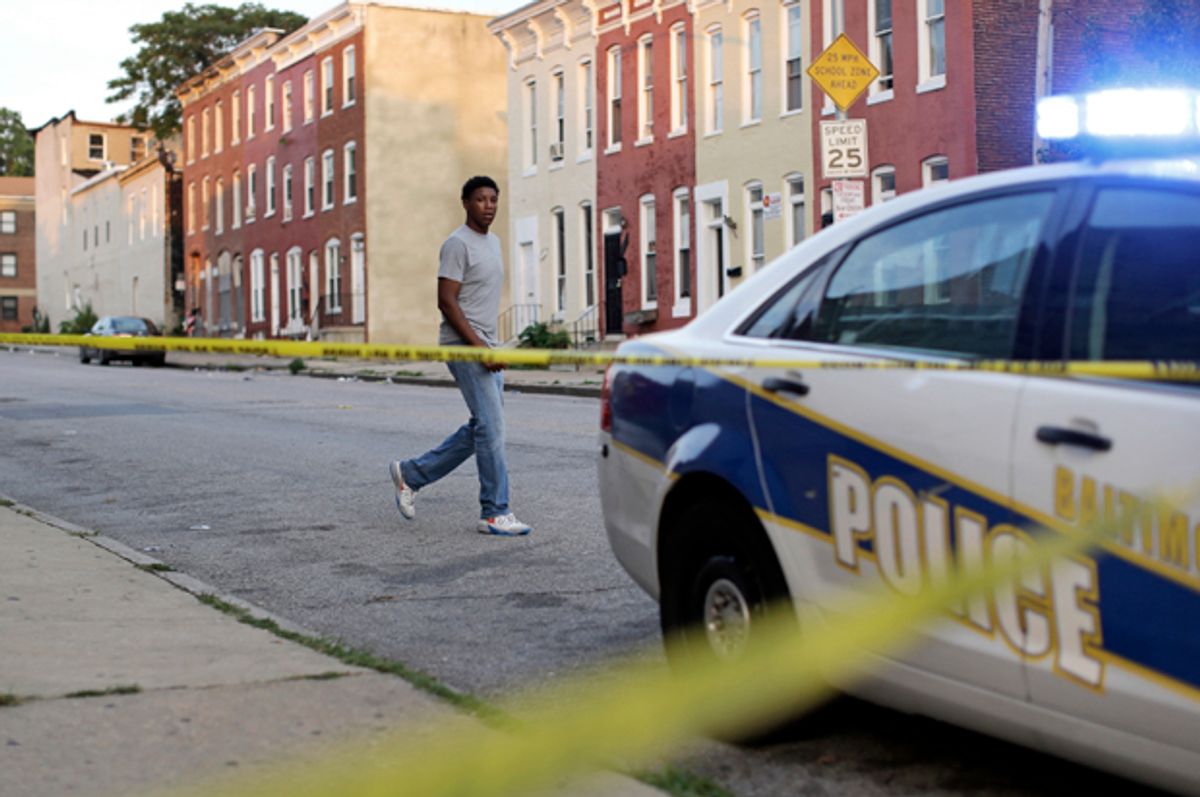 In the United States, conservatives are obsessed with “tyranny” and the threats to personal liberty and freedom posed by “big government.” As such, they see threats to “freedom” and “democracy” in almost every area of American life. The Affordable Care Act is “tyrannical.” Preventing discrimination against gays and lesbians is an “assault” on the “freedom” of Christians. Placing reasonable restrictions on firearms in the interest of public safety are tantamount to the actions of a “dictatorship.” The vaguely defined bogeyman of “political correctness” imperils individual “freedom” and the “right” to “free speech.”

Their favorite words and slogans also echo these anxieties about “tyranny” and the merits of “small government”. In his first inaugural speech Ronald Reagan, Right-wing saint and near godhead, said “government is not the solution to our problem; government is the problem.” Grover Norquist, influential Right-wing opinion leader and policy maker, made the (in)famous declaration that, “I don't want to abolish government. I simply want to reduce it to the size where I can drag it into the bathroom and drown it in the bathtub.”

These worries about tyranny and the threat to democracy and freedom posed by “big government” are very specific, in many ways insincere, and ultimately quite hypocritical. In most instances, American conservatives choose to chase imagined ghosts and phantoms when there are in fact real monsters to be confronted and brought down. They are especially silent when it is people of color, women, the poor, and gays and lesbians (as well as other groups that conservatives hold in disdain) who are made to suffer under real tyranny and oppression by “big government.”

Earlier this week, the United States Department of Justice released a report on the Baltimore police department. Their investigation was conducted in response to the video recorded arrest (and subsequent death) of an African-American named Freddy Gray in 2015, the urban unrest that followed, and the years of complaints by the black community about police harassment.

The Department of Justice’s report is scathing in its depiction of a Baltimore police department that as a matter of routine policy violates the United States Constitution and whose officers are engaging in the arbitrary use of unchecked and unrestrained power against the black citizens of Baltimore without fear of punishment. The details of the Department of Justice report read like a Hobbesian state of nature where the black denizens of Baltimore are preyed upon by the police. This report also channels the postbellum Black Codes and an American Jim and Jane Crow Apartheid regime where black men, women, and children were imprisoned after being arrested for “crimes” such as vagrancy, loitering, bumptious walking, or for not being suitably deferent to white people.

As reported by the Baltimore Sun, the 163-page report contains findings such as how:

The investigators found that "supervisors have issued explicitly discriminatory orders, such as directing a shift to arrest 'all the black hoodies' in a neighborhood."

Police practices in Baltimore "perpetuate and fuel a multitude of issues rooted in poverty and race, focusing law enforcement actions on low-income, minority communities" and encourage officers to have "unnecessary, adversarial interactions with community members," the report said.

The Baltimore Sun continues with:

Among the Justice Department findings: Baltimore police too often stopped, frisked and arrested residents without legal justification, and such activities fell disproportionately on black residents.

Federal investigators concluded that 1990s-era policies that encouraged more aggressive policing contributed to the discriminatory practices and that such measures are partly responsible for fraying the faith of city residents in their police force.

Although city and police leaders have disavowed "zero-tolerance" policing, it has continued on Baltimore's streets as supervisors who came up through the ranks under the former policy have perpetuated it, according to the report, which focused on policing since 2010.

The report noted that officers recorded more than 300,000 pedestrian stops from January 2010 to May 2015. Roughly 44 percent were made in two small, predominantly African-American districts that contain 11 percent of the city's population, and seven black men were stopped more than 30 times each.

The Department of Justice’s findings about the brutality of the Baltimore police are not an outlier. Chicago’s police were investigated and it was determined that they “have no regard for the sanctity of life when it comes to people of color.” Police in communities around the U.S. have been found to consistently harass and discriminate against blacks and Latinos. Others, such as the police in Ferguson, Missouri — the community where Michael Brown was shot and killed by police officer Darren Wilson, and an event that helped to spark the “Black Lives Matter” movement — were determined by the Department of Justice to be engaged in a coordinated and systematic campaign of harassment against African-Americans that used traffic tickets and summonses in a type of debt peonage and extortion racket.

In total, the Department of Justice’s report on the Baltimore police department is just more proof — as if it were needed — that black and brown folks are not crazy, lying, delusional, or hyper-emotional in their recurring complaints about racist and unfair treatment by America’s police. The false narratives of police victimhood given life by fascist slogans such as “All Lives Matter” and “Blue Lives Matter” cannot be reconciled with the abuses detailed by the Department of Justice report on the Baltimore police department.

There have been no outcries about tyranny and “big government” from Fox News, the broader right-wing new entertainment media, or from Republican opinion leaders and politicians in response to the abuses of power detailed by the Department of Justice report on the Baltimore police. “Principled” conservatives, a group who supposedly value “individual freedom,” “small government,” and “liberty” suspend those values when they are made to apply to African-Americans. Moreover, the authoritarian inclinations of conservatives in the post-civil rights era means that “big government” and “law enforcement” are embraced if they "protect" white people ("the silent majority" in “real America") from “those people” (black and brown Americans, Muslims, and any nebulous type of “Other”). Political scientists and other researchers have demonstrated that a belief in “law and order” is closely tied to white racial animus and anti-black sentiment. And once again, racism and conservatism are conjoined in America and cannot be easily separated from one another.

In America, conservatives and other members of the right-wing believe that the color line is a type of zero-sum game where one group’s ability to live a full and free life dictates that another not be allowed to do so. Their silence about the Baltimore police department’s tyrannical behavior against black people reveals how contingent and circumstantial their worries about the perils of “big government” really are.