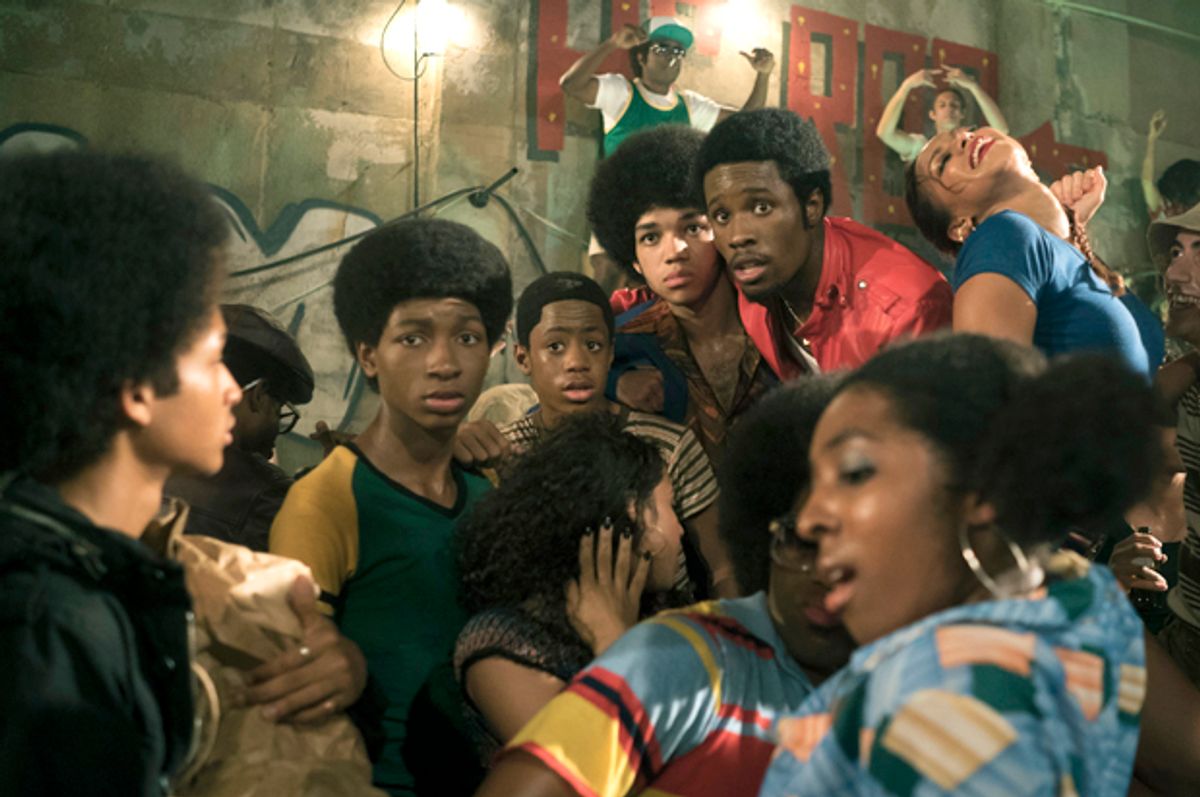 "The Get Down" (Netflix/Myles Aronowitz)
--

To understand why Baz Luhrmann, a director with a penchant for injecting glamour into his films and imposing exacting demands upon his cast and crew, could cause the budget for his 12-episode Netflix series “The Get Down” to swell to a whopping $120 million, simply spend a few minutes talking with him.

As one reporter joked, the 53-year-old director of visually lush films including "Moulin Rouge" and "The Great Gatsby" speaks with such effusive enthusiasm about his projects that he could get a person excited about dryer lint.

Having interviewed him alongside supervising producer Nelson George about “The Get Down,” it’s as easy to picture that ridiculous scenario as it is to imagine Luhrmann persuading studio executives to cough up more millions in order to realize his vision.

In “The Get Down,” premiering August 12 on Netflix, Luhrmann spins a fictionalized version of hip hop’s infancy, informed in part by the perspective of associate producer Grandmaster Flash, and layering musical and soap opera elements on top of disco dancing and breakbeats.

The consultant list for “The Get Down” reads like a wall of plaques in the Hip Hop Hall of Fame: Kurtis Blow, DJ Kool Herc, Afrika Bambaataa, Rahiem of the Furious Five, choreographers Jose Xtravaganza and Willie Marine Boy Estrada and graffiti artists John "Crash" Matos and Chris "Daze" Ellis all played vital roles in shaping the tale. Nas also serves as an executive producer on the series.

As one would expect, the choreography dazzles. The fashion and props are incredible. At the same time, pivotal moments take place in the rubble of destroyed buildings as the show’s main characters, budding rapper Ezekiel “Books” Figuero (Justice Smith) and Shaolin Fantastic (Shameik Moore), forge a friendship under the martial arts-influenced tutelage of DJ Grandmaster Flash (Mamoudou Athie).

Reportedly the production issues plaguing the series — one of the most expensive in history, according to a recent Variety story — were myriad, largely owing to the challenge of realizing Luhrmann’s version of the Bronx in 1977, one of the New York boroughs where hip hop was born.

Castmembers endured choreography boot camp for at least four hours a day. There were music rights to secure, and a cross-country location move from Los Angeles to New York, all of which caused production delays and changes in showrunner duties, further bloating the budget.

Behind-the-scenes troubles notwithstanding, “The Get Down” remains one of the most highly anticipated series of late summer. Even so, as critics sought to grapple with the show’s fantastical tone, there was evidence of a perceived disconnect between the story’s grittier elements and the stylistic vibrancy.

At the recent Television Critics Association Summer Press Tour in Los Angeles, Salon spoke with Luhrmann and George about the challenge of balancing the director’s proclivity for visual enchantment with historical and emotional authenticity. (Note that this interview has been edited for length and clarity.)

There was a deep discussion [among critics] about the artistic tone of this series. You depict hip hop coming up in the '70s, the end of this disco era, and a couple critics were saying, "Okay, there are these burnt-out buildings in the Bronx and there's scenes of gang violence. How does it make sense to make this series so colorful?"

Nelson George: Number one, every building in the Bronx wasn't on fire. Let's start there. Let's start with the fact that there were nice working-class areas where people had homes, they owned businesses.

Where Herc was, he was in the West Bronx, where Bambaataa was, in the East Bronx. So people's geography about what the Bronx was is based on ["Fort Apache, The Bronx"] and a bunch of documentaries of Ronald Reagan walking around burnt-down buildings. That's not really what it was.

Baz Luhrmann: Everything that's in this show has come from people who actually lived it… I'm like all you guys. I was handed a bunch of documentaries that were really made by outsiders.

Luhrmann: Of course they're going to be fascinated with the burnt-out bit, all the rubble fields. There were children running around with motor bike jackets on and that's the Bronx. Well, if you go talk to anyone from there, that is one part of it. Yes, the Bronx was a dangerous place and, yes, it was the poorest congressional district in the United States, but every single person I spoke to ... Grandmaster Flash, like, the colors are a very interesting thing. What do you think Grandmaster Flash wore? He certainly didn't wear black and white, grey clothes. He wore what was called color blocking. He could not be more colorful, you know?

Luhrmann: Now, it isn't just a question of color. I think what you're talking about in terms of tone —

I’m referring more to the magical realism aspect of the production.

Luhrmann: All right, let me talk about that because it's very interesting. I do magical realism, what I do naturally, but in this show it's quite interesting … What Flash will tell you, or Herc will tell you, or Nelson, who was there, what they will tell you ... CRASH and DAZE. I mean, CRAZE and DAZE ... The city was this rusted place. They went and covered it in bright colors. They made all that color, you know?

The other thing was, and I guess, this was maybe not exclusive to the Bronx, but young people, and they were very young, they're living in a world of so little negativity. They use their imaginations to, if it's not fantasize, to mythologize. Flash, in his biography, he said, "I call myself Grandmaster after kung fu and Flash after a comic book. I mashed a comic with my hero, kung fu." Now, this business about the Shaolin Fantastic and all that, Grand Wizard Theodore, you know?

I also wonder if part of this whole surprise at the tone is due to the fact that there are many more series about rock. The thought of a series like this, that would look at this era in hip hop with a sense of color and glamour… there's this school of thought positing that it needs to be handled with grit and respect for the seriousness of the subject.

Luhrmann: You're onto something really big, by the way. This is an observation I have not shared a lot, this particularly: I've worked with the hip hop greats. The last album I did, "Show," I collaborated very closely with Jay Z, right? Or Missy, right?... And Nas is on this daily. He's from the '90s. Most of these kids know hip hop from the '90s. Then, hip hop took on a different tone.

… And I'm not going to make a judgment about it ... but it was about Cristal and champagne, and "Look — we're making money." I suspect the reason that the flashiness in the very early era was a little bit jumped over, it was predominantly ... If naïve is the wrong word, it had an innocence and open heartedness about it. You know, everybody said, “Here's the big secret: Our parents were there.” Has anyone ever said to you the idea that there's a hip hop party going on and mom and dad are there?

George: There were party records in Rec Centers. There were parties in parks, they were public parks where kids are hanging out. It was very young music. I think the other thing people generally forget is that the DJs were teenagers.

…One thing I want to address, though, that kind of pissed me off — not you, per se, but…

I think I know what you might be about to say, but please continue.

George: There's a narrative of people who live in New York now who decided that because there was all this stuff that happened in the '70s, obviously no one was having fun. There was no joy. ... I lived there. We went to parties. In fact, New York was at its party apex, actually, from the late '70s into the early '80s, which is considered the nadir. Why? To people who are under pressure, fun — creating fun, wherever they could create it — becomes a big mission of your life.

To go back and address the next thing, [this idea of] "Oh, ‘The Get Down’ must be lying because it’s colorful. Oh, they seem to be having a good time at this party. What kind of fantasy is this?"