How video games suck you in: "Our sense of time becomes yoked, not to the ticking of the clock, but to the pattern of our interactions" 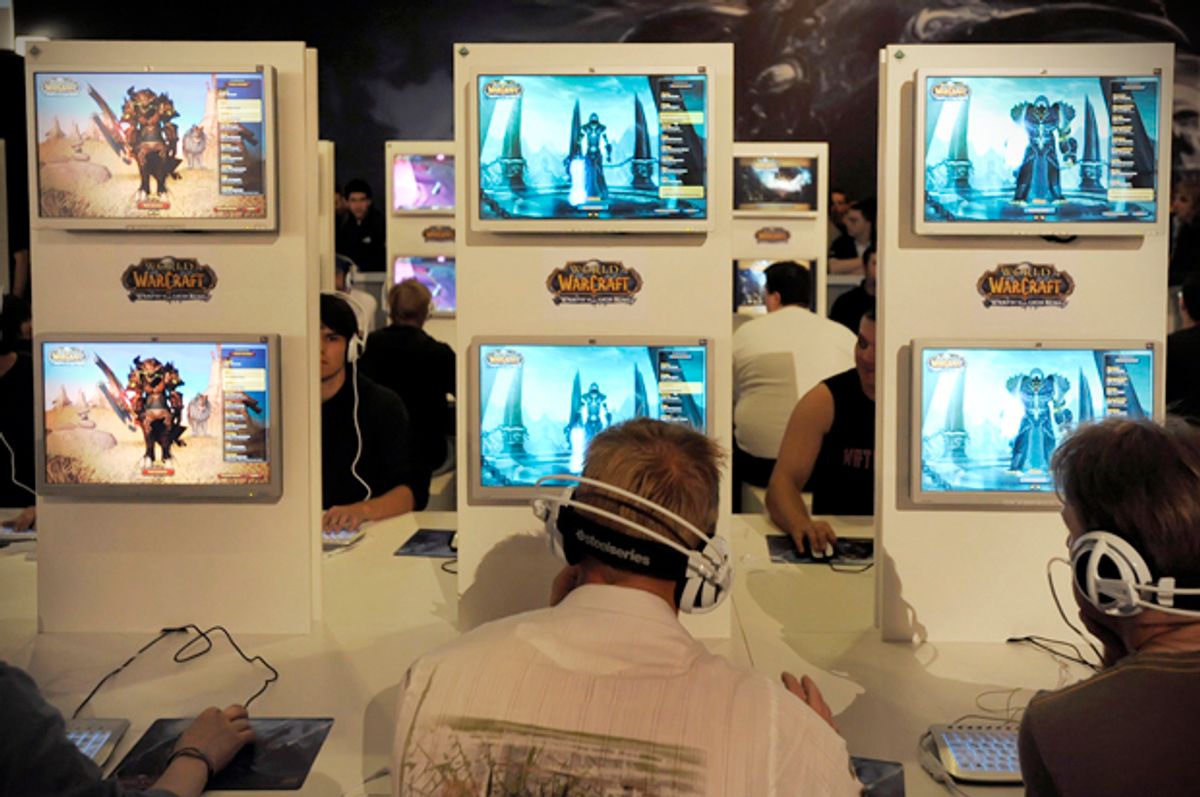 Whether you are excited or alarmed by video games — whether you think they develop the player’s capacities or doom him to self-destruction — you will find something to back you up in Simon Parkin’s “Death by Video Game.” The British journalist, who has written for The New Yorker, The Guardian, and The New York Times, is a longtime player himself, and immerses himself even deeper into the subculture of serious gamers. In fact, even if you are largely indifferent to the phenomenon, there is plenty of engaging reading in here.

Parkin’s book, subtitled “Danger, Pleasure, and Obsession on the Virtual Frontline,” begins with the danger part, but moves into other aspects as well. We read about young men who play with such obsession that they literally die mid-game, and we hear about the sexist rage that fueled Gamergate. Parkin also describes games that generate empathy, LGBT-themed games, and a game that helps people cope with the destruction of cancer. He speaks to game designers who try to combat human evil or champion social justice.

We corresponded with Parkin from his home in England. The interview has been lightly edited for clarity.

Can you start by describing some of the deaths that give your book its title, and tell us a little about them?

In 1982, Peter Burkowski walked into Friar Tuck’s Game Room in Calumet City, Illinois, posted a high score on the arcade game Berzerk and, moments later, collapsed dead. The next day, one newspaper headline read, "Video Game Death," the earliest report of its kind. There have been other cases across the years, but the rise of Internet cafes in Southeast Asia during the past decade has turned the odd isolated case into something more routine.

The case of Chen Rong-Yu, who died in an Internet café in Taipei, Taiwan in January 2012, sparked my initial interest in the subject. It was nine hours before the café’s employees noticed that he was dead, not sleeping. A few months later another young man, 19-year-old Chuang Cheng Feng, was found dead in his chair at a different Taiwanese Internet café. In February 2011 a 30-year-old Chinese man died at an Internet café on the outskirts of Beijing after playing an online game for three days straight. In September 2012 a 48-year-old man named Liu died in Kaohsiung City following a seven-hour stint at the controller. His was the third game-related death of the year recorded in Taiwan.

My initial reporting for the book was to answer the question: Why are so many people in Southeast Asia dying while playing video games?

Hasn't every form of art or entertainment — novel-reading, play-going — led to concern, sometimes even alarm?

Photography, cinema, rock ’n' roll have all, during their nascent years, invited moral panic. For example, in 1858, the San Antonio Texan newspaper printed a cautionary tale about the dangers of overindulging in novel-reading. It read: “A family brought to destitution in England has had all its misfortunes clearly traced by the authorities to an un-governable passion for novel reading entertained by the wife and mother.” The reporter absolves the husband as “sober and industrious” but describes the wife as being “indolent and addicted to reading everything procurable in the way of romance.” Hers was an obsession that led her to “utterly neglect her husband, herself and her eight children.”

The following year the Scientific American published a story about the moral risks of playing chess. The writer advised readers to avoid a chessboard “as they would an adder’s nest” because “chess misdirects and exhausts their intellectual energies.” Chess leads to ruin, the argument ran; it is a game that “no man who depends on his trade, business or profession can afford to waste time in practicing.”

Emerging forms tend to attract the young, and that combination of youth, novelty and obsession threatens the status quo. Video games are just the latest target in that long tradition. I’d argue that they’re mostly through the moral panic stage. Time always wins these sorts of arguments. The elderly die. The young take their place.

Is there something different about video games, something that makes the experience more intense or consuming or even addictive?

I think so, although it’s important to recognize that most companies and individuals making commercial entertainment in 2016 are trying to inspire a certain kind of obsession in the audience. There are all kinds of tricks used by novelists, scriptwriters and filmmakers to keep the reader or viewer turning the page, or tuning in next week. Games are no different in this regard, and there’s often a clear commercial imperative for designers to perfect ways to keep people playing as long as possible (be it so they continue to pay a monthly subscription to a particular game, or so that they purchase new add-on chapters and so on).

There’s something about the way in which we get lost in a video game that is different to getting lost in a book, though. Our sense of time becomes yoked, not to the ticking of the clock, but to the pattern of our interactions. The best games present a reality that engages us totally, flatters us by requiring our presence and input. In this way we synchronize with the game’s tempo. That’s why our time spent with video games often dwarfs that spent with even the most expansive multi-season Netflix series.

Do you think the press and media exaggerate the threat of video games? If so, what motivates it?

Tabloids are forever blaming video games for their role in the latest school shooting. That kind of reporting is increasingly passé, simply because most readers under the age of 45 have grown up with video games in their entertainment diet. The pariah shtick doesn't work on them, so the narrative is forced to change.

That said, game industry leaders have often failed to deal with these scandals in a mature way. Following the Sandy Hook shooting, the U.S. government commissioned a report into the effects of media on vulnerable minds. Constance Steinkuehler, the White House’s first policy advisor on video games, and Vice President Joe Biden met with representatives from the film and video game industries for a discussion of what could be done.

The Hollywood studios offered suggestions for how they might improve matters by, for example, helping to remove the stigma around those seeking help for mental health issues in new films. The game industry bosses, according to Steinkuehler, spoke solely about how video games are an art form that is protected as free speech by the Supreme Court. They didn’t offer any solutions. It’s possible to acknowledge that you’re not part of a problem while simultaneously offering ideas for how you might be part of the solution. So while the media has historically exaggerated the threat of video games, there’s no room for smugness on the industry’s side.

Gamergate became notorious a few years ago for its sexism and general nastiness. Does that crew seem unusual in the larger gamer subculture?

My experiences meeting people in the flesh who play and make games have been almost universally positive so, in that sense, the poisonous behavior of some self-described "gamers" online is atypical. In terms of broader Internet culture, however, misogyny, doxxing, mob justice and all the rest is, regretfully, commonplace. In that sense, this isn’t a video game-specific problem. It's a problem, I think, derived from a failure in education, in understanding, in empathy and in manners -- something whisked into a more powerful and dangerous force by way of anonymity and easy access to targets. There is a great deal of evidence that the industry, like so many others, is working to improve representation in games, to combat sexist clichés, and, one hopes, clichés in general.

What are some of the good things that video games can do? Develop the brain and coordination, generate empathy?

All of those things and more. There’s a great deal of research focused on the positive aspects of video game playing. In March a paper published by Columbia University's Mailman School of Public Health found that high video game usage was associated with a 1.75 times the odds of high intellectual functioning and 1.88 times the odds of high overall school competence. The researchers found that more video game playing was associated with fewer relationship problems between peers.

There’s evidence that swings the other way too, of course. For one thing, our accomplishments in games are indistinguishable from accomplishments in life (and often more easily won), so can inspire a deep and consuming obsession in the human mind. The merits and perils of the medium are complex and nuanced. There are, sadly, no easy headlines here.

What do you tell parents or friends who are disturbed by the obsessive gaming habits of someone they know?

Last month a mother accosted me after a panel discussion in Oxford about the merits of video games. She described her 22-year-old son as “an Einstein” who has been knocked from the path of diligent study by a lingering obsession with "League of Legends." I meekly offered my perspective. I told her that his obsession would likely pass. I argued that game-playing often teaches skills of cooperation and even leadership that are valuable outside of the game’s reality. I pointed out that, at some point, he will have to start making money of his own. Finally, once I plucked up a bit of courage, I told her that, at 22, it might be time to let her adult son make some of his own mistakes, unhindered.

When I was finished she didn’t turn to leave but instead stood firm, restating her concerns. She wanted a better answer (or maybe an accomplice). Many parents are deeply concerned about their children’s gaming habits and, more broadly screen-time in general. A balanced diet is, as ever, the key. The odd binge won’t kill you. To return to that century-old Scientific American piece: Chess can indeed lead to ruin. But that’s not the only path games open up.