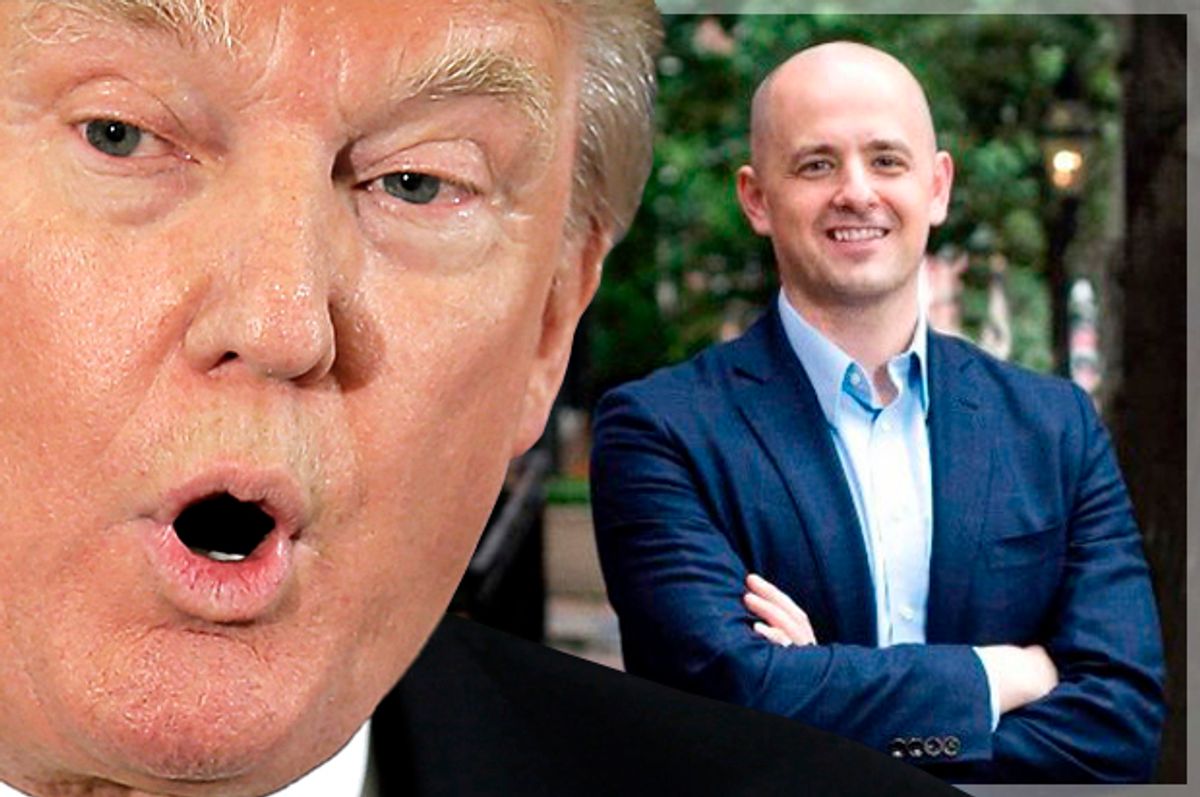 Since last week, political obsessives have been scrambling to find out any bit of information they can on Evan McMullin, a little-known former CIA officer who has decided to run for president on a platform vaguely similar to the one that Mitt Romney ran on in 2012.

With no name recognition and no executive experience, there is no chance that McMullin could win. But that isn’t the point of the exercise.

The McMullin candidacy, which is being pushed by the remnant of the NeverTrump movement, appears to be designed with several key goals in mind: 1) Prevent Donald Trump from getting a majority in the Electoral College, 2) Promote a hawkish foreign policy, and 3) Motivate disgruntled anti-Trump Republicans to show up to vote for down-ballot Republican candidates.

The first goal was spelled out last month in a lengthy blog post by Stu Burguiere, a co-host of radio pundit and doomsday prophet Glenn Beck.

In the essay, Burguiere lays out an elaborate fantasy scenario which he calls “the election bailout plan that could save us from both Trump and Hillary.” In his proposal, Burguiere argues that a fifth-party conservative spoiler candidate could actually do well in some deep-red states where the residents strongly disagree with Democrat Hillary Clinton as well as Donald Trump.

There are almost no such states, since the overwhelming majority of Republican voters say they support Trump. But there is one region of the country rich in the voters that Burguiere describes: the inter-mountain west region centered around the state of Utah, one of the very few states in which Trump’s final principle rival Ted Cruz actually managed to defeat him soundly.

The one thing the three states Burguiere targets — Utah, Idaho and Wyoming — have in common, besides a lot of mountains, is that they have a higher percentage of Mormon residents in comparison to their general populations.

That fact seems to have been what won the day for Evan McMullin among the remnants of NeverTrump since he, like many of the residents of the three states in question, is a Mormon. He even went to the faith’s well-known college, Brigham Young University.

It’s still a long uphill climb for McMullin to win any of these states, but there is at least the possibility that he could throw them to Hillary Clinton. All three, in fact, have a history of voting for Democratic governors, despite their Republican reputations. As late as 2013, Utah’s second federal congressional district was represented by a Democrat. Wyoming had a Democratic governor as late as 2011. All three have shown a willingness to vote for third-party candidates who don't have a prayer.

Even if he doesn’t manage to make much of a dent, the very existence of the well-funded McMullin candidacy is almost certain to have an impact on the Republican electorate. Anyone can see this by heading over to large conservative communities like Free Republic, where the members are positively incensed at McMullin’s bid and at the people backing him.

Free Republic is an interesting case because, by and large, its members are more conservative than the Republican Party. A majority of the membership took a long time to come around to support Trump during the GOP primaries. Initially, Anybody-But-Trump was the leading candidate, with many favoring Ted Cruz. Since Trump became the presumptive nominee, however, Free Republic has closed ranks and begun backing Trump to the hilt.

The grassroots right seems to be responding to the McMullin candidacy the same way they did to Ted Cruz’s refusal to endorse Donald Trump at last month’s GOP convention: hot anger at an insider who won’t abide the people’s choice.

“These mother****ers are really pressing their luck,” argued member dp0622. “I see a Bastille Day in their future.”

“His first step needs to be taking a long walk off a short pier,” advises member headstamp 2.

Freeper JamesP81 sees a conspiracy of what members call the “GOPe,” or the Republican Establishment: “Looks like the GOPe’s Operation BackStab is in full effect.”

I could go on, but I won’t. Essentially, a huge part of the Republican voting base, many of whom did not support Trump during the primaries, sees the McMullin candidacy as a betrayal on the part of Washington Republicans. It’s not difficult to imagine that they will neither forgive nor forget it, especially if he manages to flip a state to himself or to Hillary Clinton.

There’s no chance that McMullin could somehow be elected through a U.S. House vote (that’s the ultimate goal of Burguiere’s fantasy above). But the former CIA and Goldman Sachs employee just might manage to blow up the Republican Party’s shrinking electoral coalition.

That might actually be the plan, believe it or not. In a lengthy essay for the New York Daily News, anti-Trump Republican consultant Rick Wilson (who is one of McMullin’s top backers) argued that the former reality TV star must be defeated overwhelmingly by Hillary Clinton to ensure that “the terribly divisive forces he has unleashed are delivered a death blow.”

The Party of Lincoln needs a complete, top-to-bottom reset — one that completely purges the Trumpkins who believe racial animus is a governing philosophy and that their ignorant and angry primal screams can ever build a Republican majority. […]

Well, Trump voters, […] I’m not going to coddle you and say you’re really smart and good people and this is just a misunderstanding. That’s just what the PC crowd does on the left.

Trumpkins don’t deserve a participation trophy for wrecking the party and saddling the nation with Hillary. They made the crazy the enemy of the good, and centered an entire campaign on rage, fear and an eternally shrinking spiral of cult-worship and fanaticism.

They dragged one of America’s great political parties from the back of a truck.

To begin to repair the damage done, they need to see not that their way almost succeeded, if only one or two states had broken differently. They must absorb the painful reality that their way cannot, will not, ever work again. […]

So when it’s over, Trumpkins, remember: You’re not purging us. We’re purging you.

Even before the McMullin gambit, the prospect of a Trump general election victory was quite low. Given that anti-Trump Republicans couldn’t muster enough votes to defeat him with only two other opposing candidates, however, it’s quite possible that Trump-supporting GOPers just might be the ones doing the purging.

If you thought that the turmoil within the American Right was going to die down after 2016, welcome to the new reality. Someone just poured gasoline on the Republican Party.

Only time will tell who survives.

This article was originally published on Praxis.ink.