"This is...one of the fights of a lifetime," says the author of the new book "Corporate Citizen?" 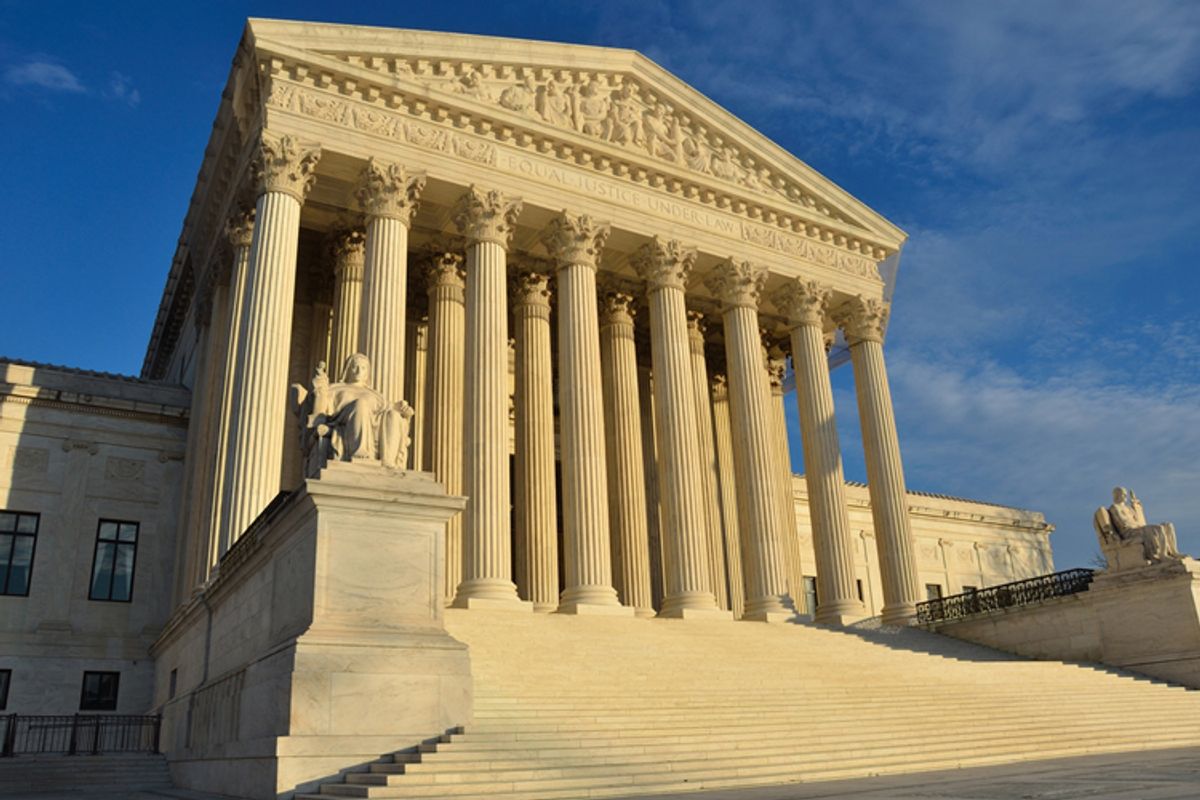 Birthplace of the Citizens United decision (Orhan Cam via Shutterstock)
--

Not many people with a healthy regard for their bank balance would have made the decision Ciara Torres-Spelliscy did: to leave the white-shoe law firm of Arnold & Porter for a new career in election law. She remembers feeling gleeful, though: “I thought: I have finally escaped the boredom of corporate law,” she told BillMoyers.com in a recent interview.

But life has a way of throwing funny curves, and 11 years later, Torres-Spelliscy’s old field of expertise has turned out to be integrally important to her new one. Her just-released book, "Corporate Citizen? An Argument for the Separation of Corporation and State," analyzes a wide range of cases to show how corporations have leveraged rights originally reserved for citizens to expand their influence and avoid regulation. It’s a phenomenon that dates as far back as the Gilded Age but that, Torres-Spelliscy argues, has been vastly accelerated by the current Supreme Court and especially by its 2010 decision in Citizens United.

Since the justices “were literally giving corporate entities First Amendment rights, which I think a lot of people think of as protecting the free speech of individuals, as in human beings,” Torres-Spelliscy said. “So I sort of had to dust off my corporate knowledge and apply it in election law.”

In her book, Torres-Spelliscy makes the case that the decision to extend First Amendment protections to corporate “persons” — who, unlike real ones, can’t be jailed and never die — is the latest chapter in a long history that has seen clever lawyers turn laws that were meant to defend individual rights to the advantage of moneyed interests.

“One of the key forks in the road was after the Civil War when the 14th Amendment was adopted,” Torres-Spelliscy said in the interview. “It includes the Equal Protection Clause, and one of the early claimants of equal protection rights was not the emancipated slaves that this clause was meant to protect, but rather, it was corporate lawyers, who came in on behalf of their clients saying they too should have equal protection rights.”

Torres-Spelliscy’s own personal odyssey from corporate lawyer to corporate critic is intertwined with the civil rights movement. Like President Barack Obama, she is the child of a white mother and a black father. She grew up in Richmond, Va., shortly after the landmark 1967 Loving v. Virginia case in which the U.S. Supreme Court declared laws against interracial marriage unconstitutional. While the “daily kindnesses I saw between my parents influences my optimism,” Torres-Spelliscy doesn’t hide her dismay over the current state of race relations or sugar-coat her analysis of the reason for it.

“When Barack Obama was first running in 2007 and 2008, my fear was that the country was not ready for him,” Torres-Spelliscy said of the president whom she unabashedly admires. “And I think that fear has been borne out.” She cited “speakers at the Republican National Convention still clinging to this weird accusation that he’s secretly Muslim,” noting, like the lawyer she is, that the oft-repeated canard, even if true, wouldn’t matter: the Constitution explicitly bars a religious test for the political office.

“What seems to underly it is this inability in certain parts of the United States to accept that a black man can be president, that there must be something illegitimate about this,” Torres-Spelliscy said. “And I fear that what should have been this moment of change has actually only exposed a really dark underbelly of American political thought.”

As an undergraduate at Harvard University, Torres-Spelliscy majored in Afro-American studies and took a class from the provocative multimedia philosopher Cornel West that she credits with setting her on the path to where she eventually landed. The class, called “Democracy,” made her think for the first time about the role money played in politics, Torres-Spelliscy said.

Going to work as a corporate lawyer straight out of Columbia Law School hasn’t made Torres-Spelliscy any less suspicious of her erstwhile clients’ power. “I worry about what the largest corporations on the planet are up to,” she said. “Some of them have more resources running through those corporations than actual countries have running through their treasuries,” she said.

Now, she added, transnational financial behemoths are enjoying additional influence, thanks to “the magnifying power that corporations seem to be getting from our courts.” She criticized Chief Justice John Roberts’ court for “using the First Amendment in a very blunderbuss manner to deregulate all sorts of things that I think were very noncontroversial just a few years ago.” As an example, she cited court rulings that prohibited the Food and Drug Administration from requiring tobacco companies to put more graphic health warning labels on their products.

According to Torres-Spelliscy’s book, those kinds of decisions grew out of a legal tradition that began with the momentous post-Civil War decision that the equal protection clause was not limited to natural persons — a decision that was arguably pre-rigged by the clever machinations of the infamous Gilded Age figure, Sen. Roscoe Conkling.

“Citizens United didn’t come out of nowhere,” said Torres-Spelliscy, whose book parses more than a century of legal decision-making that, more often than not, went in favor of corporate pleaders claiming that their legal “personhood” gave them the same rights as U.S. citizens. Torres-Spelliscy does not believe the results have been healthy for society. “The more rights the courts give corporate entities, the harder it is for legislatures, whether they are state legislatures or the Congress, to regulate corporations,” she said.

To Torres-Spelliscy, there are “two big problems” with corporate spending on elections. “Under current American law, there is no requirement for the corporation to tell its investors that it’s spending in politics,” she said. “And the other problem is there’s no opportunity for shareholders in American companies to vote on whether it’s appropriate to be in politics at all. So we have this transparency problem and this consent problem.”

Further complicating the situation is that allowing corporations to spend in elections raises immediate problems with the enforcement of existing U.S. law that bar foreigners from donating to U.S. candidates. Torres-Spelliscy’s favorite example for illustrating the dilemma is Citgo, the gasoline company owned by the government of Venezuela.

“What is totally ambiguous after Citizens United is whether Citgo is allowed to spend in American elections or not,” she said. “On the one hand, they’re a corporation, and the decision says that the identity of the speaker doesn’t matter, and they can spend in our elections. But the issue is, if you had a Venezuelan individual, it would be clear that they couldn’t spend under our election laws. But suddenly if that foreign individual sets up a Delaware corporation, that Delaware corporation does have the Citizens United rights to spend in our elections.”

Despite representing the Davids in a battle against a Goliath of a status quo, Torres-Spelliscy is not giving up. “There are many reasons to be pessimistic about the world, but I feel like we can’t give up on trying to improve the democratic process, trying to put voters at the center of our democracy,” she said. “This is, I think, one of the fights of a lifetime. At least, for me, I’m still willing to put my dukes up.”