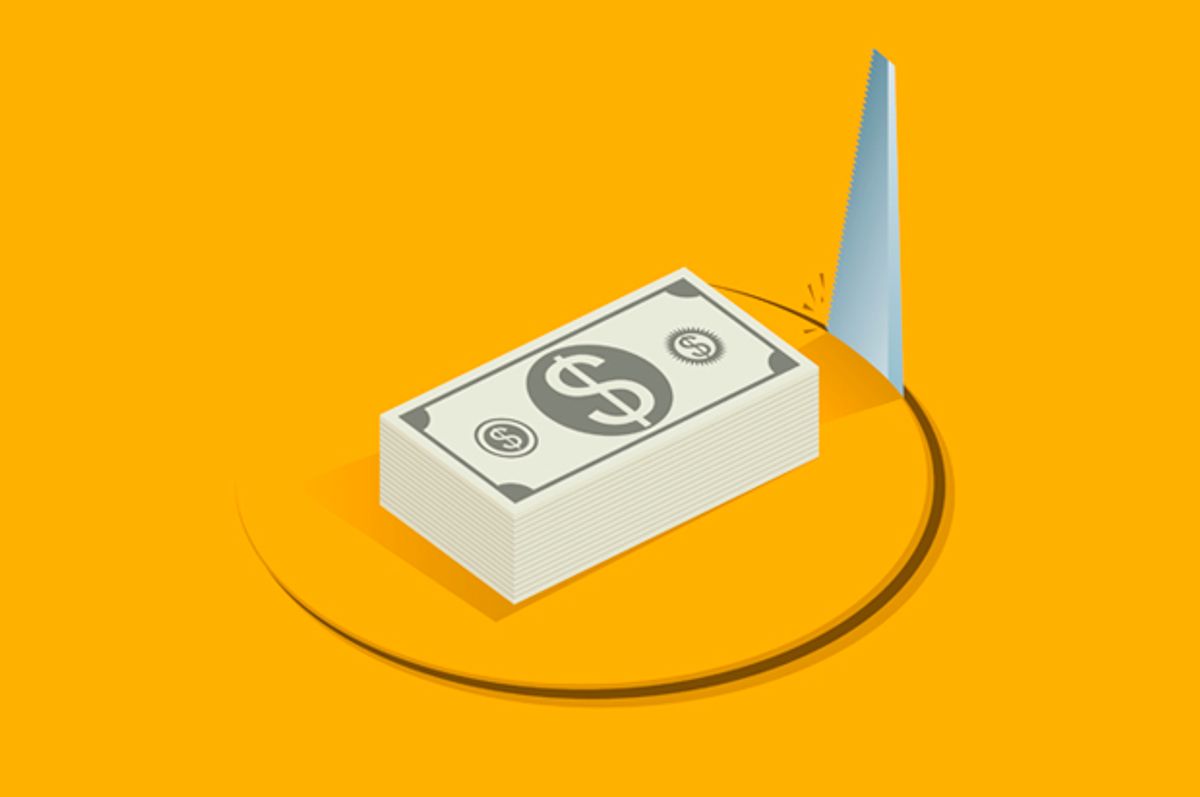 Some corporations engage in such abusive consumer rip-offs that they're just plain evil. But then there are some profiteers that dig even deeper into the dark void of their corporate souls to achieve the ultimate status: TRULY EVIL.

Consider the gang of debt collection firms that are thuggishly and lawlessly rampaging across the country, ruthlessly abusing consumer rights and common decency. Susan Macharia, a California administrative employee, is one of thousands of middle-income and low-wage workers each year who get robbed by these relentless money grabbers. Out of the blue, she got a rude call in January from a collector demanding she pay $10,000 for a credit card debt she ran up in 2003.

Only Ms. Macharia had no such debt. In fact, as she told the New York Times, she didn't even have a credit card until 2013. Yet the collection agency declared that it had a copy of a 2006 court judgement for non-payment filed against her, addressed to her California residence — so pay up, or else! But wait, she lived in Atlanta in 2006, not California. Nonetheless, ignoring facts, the callous collection outfit got a court to rubber stamp an order to let the creditor garnish Macharia's paycheck, effectively stealing $800 a month from her.

"I couldn't sleep," she told the Times, "and I lost so much weight because I couldn't eat. There was so much stress. And I knew I hadn't done it!" Luckily, however, a group named Public Law Center took her case, went straight to the company she supposedly owed, and showed its executives the obvious errors in the collection agency's debtor file. Embarrassed, the company called off its attack dogs and returned the money it had taken from her paychecks.

Few are so fortunate, however. This collection firm, and hundreds like it, is still marauding across the land, and some 3,000 people a month are filing formal complaints that they're being hounded mercilessly for debts they do not owe. It amounts to legalized highway robbery.

Speaking of robbery, Donnie Trump thinks we should elect him and his fellow Republicans, as they claim to be the law 'n order party. So, why would they try to kill the sheriff and unleash thousands of robbers to run wild across America?

The sheriff they want to kill is the Consumer Financial Protection Bureau. And the robbers are these disgusting, unethical debt collectors like the ones Susan Marcharia encountered. These thieves that Donnie & Gang are out to help are the nationwide web of corporate debt collectors who pay pennies on the dollar to buy huge databases of overdue bills, then hound the borrower to pay up. They are the hired hit men of credit card giants, Wall Street mortgage packagers and other corporate creditors — and they profit from weak regulations that let them bully, harass, rob, and run roughshod over tens of thousands of consumers every year with illegal tactics — including people who've already paid off their debt or never even incurred it.

Every year, the debt collection firms routinely abuse the law and overload our courts by rote filing of hundreds of thousands of lawsuits against debtors. Masses of these suits are backed only by flimsy, out-of-date, erroneous, forged or non-existent evidence. Collectors don't care about the evidence, for their intent is not to win in court, but to frighten or bamboozle people into paying money they don't owe.

To its credit, the Consumer Financial Protection Bureau recently sided with the victims of this corporate thievery, proposing new rules to stop the outlandish abuse. The Trumpist Republicans have responded with outrage — not at the corporate outlaws, but at the sheriff! Their 2016 party platform advocates for abolishing the consumer bureau, calling it a "rogue agency" for daring to stand up to the real rogues that are openly robbing workaday Americans.

Why is the GOP so shamefully soft on crime? Because it's not just small fry debt collectors involved in this outlandish shakedown of innocent borrowers, but such Wall Street powerhouses as JPMorgan Chase and Citibank — which are also generous political donors to Republican candidates.

Highway robbery is a crime ... or not. Depends on who is robbing whom.