Hillary's Social Security flop: Clinton must embrace program's expansion to get ahead of Trump

Can we afford to dramatically expand Social Security? Yes — here's how 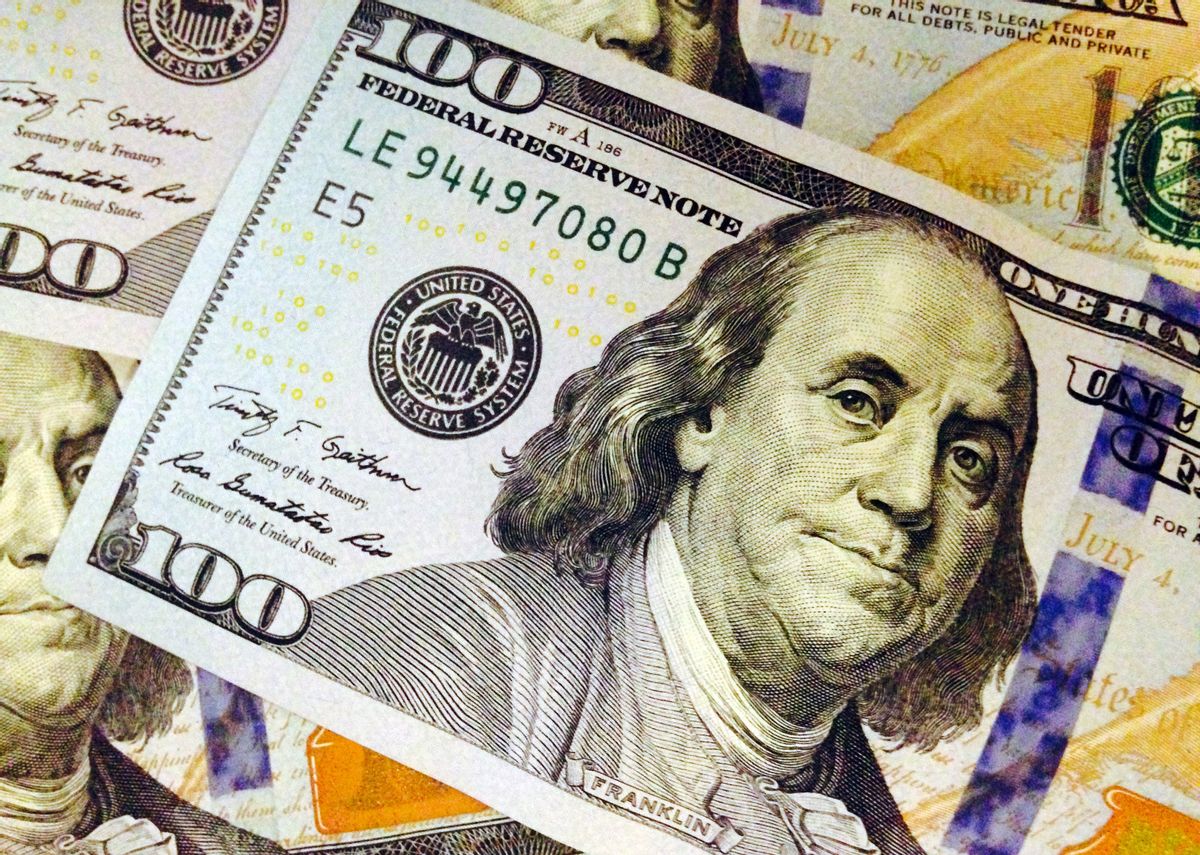 FILE - This Feb. 2, 2015, file photo, depicts a part of a U.S. $100 bill. The federal governments two largest benefit programs face short- and long-term financial problems as they close in on milestone anniversaries. The magnitude of those problems will become clearer when the trustees for Social Security and Medicare issue their annual report cards. (AP Photo/Jon Elswick, File) (AP)
--

Hillary Clinton is ahead in the polls, but it's more due to Donald Trump’s many blunders than excitement with Mrs. Clinton. She is benefiting at the moment from being the anti-Trump, but her campaign is badly in need of a bold issue that fires the imagination of voters. Otherwise, if Trump stops the bloopers and regains his economic populism, this race could tighten very quickly.

What issue should Hillary Clinton focus on that will rally voters? Here’s one: a dramatic expansion of Social Security. Social Security enjoys stratospheric support, even among 70 percent of Republican rank-and-file voters. It's the greatest anti-poverty program that the country has ever enacted. It's been an especially important support system for minority and female retirees — three-quarters of Americans depend heavily on Social Security in their elderly years and nearly half would be living in poverty without it. It's also good for U.S. businesses and the broader national economy, since it acts as an automatic stimulus during a weak economy that helps to maintain levels of consumer spending.

Today is Social Security’s 81st birthday (its birth date was August 14, 1935), and it remains one of the most popular government programs ever. The only real question is: can we afford to dramatically expand Social Security? Isn’t it going broke?

We can afford it. As I show in my recently published book "Expand Social Security Now: How to Ensure Americans Get the Retirement They Deserve," there is so much waste in the U.S. tax system that if we simply closed many of the tax deductions and loopholes that disproportionately favor the wealthy few, we could easily pay for it. Here’s how.

The solution: Social Security Plus

The real challenge for the nation’s retirement system is not that it might go broke in two decades. That’s not going to happen, because Social Security has an established trust fund that, legally speaking, cannot spend more than it takes in. Any future shortfall could be made up from any number of revenue sources, it’s all a matter of budgetary priorities.

The real problem with Social Security is that its payout is too meager. Social Security is designed to replace only about 40 percent of a worker’s wages at retirement. Yet most experts estimate you will need almost twice that amount to live decently. Private retirement pensions, as well as personal savings centered on homeownership — the other two legs of the three-legged stool of retirement — collapsed for most Americans during the economic bust of 2008, and even before that. Today tens of millions of retirees don’t have much more than Social Security, yet the monthly benefit is woefully inadequate. The solution, as Bernie Sanders pointed out, is to expand Social Security, not cut it.

But even Senator Sanders’s proposal would have added only about $68 per month per beneficiary — better than nothing, but not enough to make a significant difference. The United States needs a much more dramatic expansion for the 43 million Americans who receive retirement benefits. How much would it cost to double the monthly payout and create a system I call Social Security Plus? Approximately $662 billion. That seems like a lot of money, but it’s achievable. Here’s how we can do it, step by step.

Eliminate tax shelters and loopholes for 1-percenter households and businesses.

The ones to eliminate should include capital gains, investment income, “carried interest” and the truly outrageous “step-up in basis,” which exclusively benefits inherited wealth. These function as direct federal subsidies to mostly affluent Americans. And they cost the national treasury some $350 billion per year.

The “step-up in basis” exemption is particularly repugnant. When a yacht, mansion or any other type of expensive asset is sold, the seller’s profit is subject to the capital gains taxation rate of 15-20 percent — about half the 39.6-percent tax rate that the wealthiest pay on their wage income. Normally, the amount subject to taxation is the difference between the sale price and the amount that the seller originally paid for that particular asset. But for inherited property, the difference is calculated using the date that the previous owner died and left it to the heirs. As a result, the appreciation in value is much less, and so are the capital gains taxes. Rather than a “step-up in basis,” this dodge might more accurately be termed a “step-up in privilege.” In 2015, this rule reduced federal revenues by a whopping $63 billion.

This is one of the 10 largest federal tax expenditures in the entire individual and corporate income-tax system. And most of it is pocketed by the wealthiest of Americans. Of course none of the income received from the sale of these inherited assets is taxed for Social Security purposes. If it were, at the usual 6.2-percent Social Security tax rate that all workers pay, it would generate another $19 billion for the Trust Fund.

President Barack Obama has done nothing to close these loopholes while president, and Hillary Clinton has been mostly silent. Ironically, Donald Trump has been more outspoken about closing these loopholes than most Democratic leaders and was very supportive of Social Security during the GOP presidential debates and primaries.

Eliminate the tax exclusion that employers receive for sponsoring their company’s retirement plans.

Scrap other tax breaks that have failed to enhance the retirement security of most Americans, since these deductions also vastly benefit the well-off.

Savings vehicles such as 401(k)s and IRAs have proven to be ill-equipped to help most retirees for a very simple reason — you can’t put very much into your 401(k) if your wages are too low to save. And with aggregate wages in the United States staying flat for the last three decades, the reality is that most middle- and poorer-class Americans haven’t been able to sock much away. Consequently, of the $165 billion that the federal government spends subsidizing individual retirement savings, nearly 80 percent goes to the top 20 percent of income earners. President Obama has proposed a universal 401(k), in which workers with no savings plan will be automatically enrolled in a 401(k) plan. But it seems pointless when wages are so low that the vast majority of middle-class Americans can’t accumulate sufficient savings.

The same is true for federal underwriting of homeownership, which totaled $154 billion in 2014 — nearly four times the $42 billion the Department of Housing and Urban Development spent on all affordable housing programs for low-income people. The federal subsidy for the home mortgage interest deduction amounts to around $70 billion per year, with Americans in the top 10-percent income bracket hoovering up a massive 86 percent of it. And the federal tax deduction allowed to homeowners to mitigate the cost of state and local property taxes they pay on their houses cost the federal budget another $32 billion in 2014; a study by the Congressional Budget Office found that Americans in the upper 20-percent income bracket reaped 80 percent of this federal subsidy.

Just to make sure everyone understands whom the tax code favors, homeowners also do not have to pay taxes on up to $250,000 of their capital gains profits when they sell their home, which doubles to $500,000 for married taxpayers. That exclusion amounts to a federal subsidy to the tune of another $52 billion. These three federal subsidies for homeownership mostly subsidize higher-income people; renters and most low-income Americans don’t benefit at all, and while some middle-income people benefit, the total amount of their deductions and subsidies are comparatively small. They would be far better off if we doubled their Social Security monthly benefit.

To put it bluntly, these tax-code favoritisms are nothing more than entitlements for wealthier people at the expense of everyone else. These affluent recipients of federal largess are the true “welfare queens,” since these subsidies are mostly not available to middle- and lower-income Americans.

If we combine those budgetary add-backs with our previous savings, we now have reached nearly $900 billion, well over the $662 billion level we needed to reach in order to enact Social Security Plus and double the national retirement system’s monthly payout. And note that we were able to do this without spending a dime more in government money or national wealth than what is already being spent on the retirement system or subsidizing the wealthy. We are just shifting expenditures that right now benefit a small number of people to redirect these resources toward the vast majority of Americans. We can accomplish much by enacting tax fairness, ensuring that all Americans contribute their share to the nation’s retirement system. The end result would bring us in line with the national retirement systems of other advanced democracies such as Denmark, Sweden, France and other places. Heck, if they can do it there, why can’t we?

More and more members of Congress, led by Senators Bernie Sanders and Elizabeth Warren, as well as other political and media leaders and organizations like Social Security Works and the Progressive Change Campaign Committee, have come to the conclusion that we need to expand Social Security. So has President Obama, who previously disappointed his backers by supporting ill-advised cuts to the program. Unfortunately Hillary Clinton has been the worst kind of waffler on this issue. If she isn’t careful, she is going to be leapfrogged by Donald Trump, who is unpredictable enough to take a bolder stand on Social Security.

With support among even Republicans extremely high, there appears to be no political risk to Hillary Clinton being out front on this issue. The Clinton campaign should become a key catalyst in this movement by leading the way during this presidential election. What is she waiting for?