This is how your favorite wine gets made: Forget Uber — tech pioneers are chasing the perfect Cab 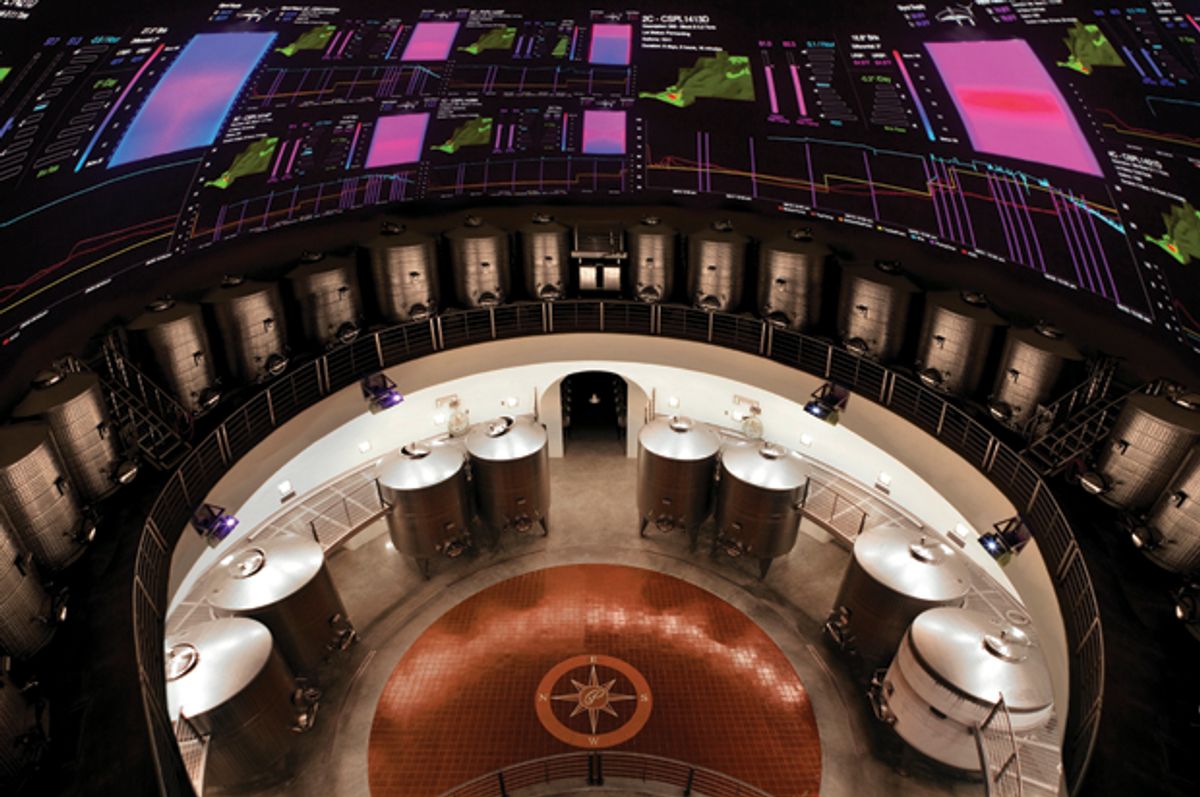 The super computer display on the dome of Palmaz fermentation cave
--

In 2000, when start-up guru Chuck McMinn arrived in Napa Valley to embark on a second career as a vigneron, the man who once worked at Intel and later as CEO of early DSL provider Covad Communications encountered a community of humble farmers so focused on the minutiae of growing, harvesting and fermenting grape juice that the world had passed them by.

“We purchased two vineyards. They would send out paper letters to all their customers with blank order forms and ask people to fill them out by hand and fax them back with a credit card number on it. That was state of the art," McMinn says. "The web had been live for ten years and browser technology was five years old.” Napa Valley wasn’t low-tech back then, it was no-tech.

Rob McMillian, the founder of Silicon Valley Bank’s wine division, recalls those days well. “Back then probably 30 percent of my clients still used paper ledgers for their accounting," he says. "They didn’t even own a PC.”

Ever the trendsetter, McMinn’s first order of business was funding Cultivate Systems, a web-based ordering system that, to this day, moves a couple million dollars for product wineries in the U.S. every year. It took McMinn sometime to fully understand just why the vineyard owners and farmers around Napa were so resistant to the digital world.

“Fundamentally, to make great wine you must be a great farmer,” McMinn told Salon. “Fifty percent of what great wine is, is where vines are planted, the terroir — right place, right varietal, right root stock. Twenty-five percent is weather, in any particular year. Twenty-five percent is the skill of the winemaker, turning grape juice into wine. That and technology aren’t tightly coupled. People here aren’t anti-technology. They’re a 'show me' group. Getting distracted could compromise the quality of the product. They don’t want that.”

Sixteen years later, Napa continues to make, arguably, the most sought-after Cabernet Sauvignons in the world (not to mention renowned Chardonnay and Sauvignon blanc) and it is the most technologically forward-thinking winemaking region in the world. Those old hippie vintners have have fully embraced digital technology and are using it to make their previously big businesses into titanic money-making operations. Others have noticed that there's gold in Napa's hills — some of, if not the best, Cabernet Sauvignon in the world. Massive beverage companies (long purveyors of the generic jug) have recently discovered that Millennials value premium drinks, so they are in speculation mode, buying small vineyards and labels for hundreds of millions of dollars. Moguls from winemaking strongholds like Burgundy have invaded, paying upwards of $250K per acre for a foothold in Napa Valley. And the area has also been become home to a new wave of tech billionaires eager to try their hand at winemaking. All of which is a validation for McMinn and a handful of other trendsetters who've lead Napa into modernity, but it raises the stakes as well.

Napa has become a leader in wine-world innovation — in part because of its proximity to UC Davis, which boasts a leading viticulture and enology school and in part because of its proximity to San Francisco and Silicon Valley. David Duncan, the CEO of Silver Oak Cellars, one of Napa’s leaders in high tech and sustainable winemaking, adds that Napa benefits from some cultural similarities to the Bay Area’s tech community. Long before open-source code was a thing, the open-sharing information was standard in Napa winemaking community — and now, as a result, nearly every winery is engaged in efficient, high-tech winemaking.

Back in 2000,  McMinn didn’t restrict his advancements to the logistics side. Over the next five or so years, as he got his new winery, Vineyard 29, off the ground, McMinn linked up with Fruition Sciences, an Oakland-based precision viticulture company run by a cabal of French PhDs. Fruition Sciences had created thermal sensor technology to measure the amount of water taken up by individual grapevines by measuring sap flow through a vine in real time. Those measurements provide winemakers with an exact picture of the vine environment over each day, week and month of the growing season — not to mention from year to year and vintage to vintage. McMinn also started using an optical sorter technology, designed by a French firm to remove imperfect grapes, stray stems and other ennui from the harvest. Sorting had traditionally been a job reserved for human hands. According to McMinn, this new mechanized tool is faster, more effective and doesn’t get tired.  Later, McMinn had his HVAC technician install power-generating micro-turbines throughout his winery. McMinn captures and reuses all of the runoff energy and uses it for warming the fermentation tanks in winter and running the air conditioning during summer and cooling the caves. Vineyard 29 is, remarkably, 82 percent energy efficient.

Meanwhile, just up the road from Vineyard 29, at Palmaz Winery, Dr. Julio Palmaz, the MD who created the balloon-expandable coronary stent, is practicing a version of viticulture that only vaguely resembles the  traditional winemaking you see in movies. Palmaz and his family spent eight years and a reported $20 million in building the most technologically advanced winery on the planet, in order to reinvent the entire process.  The Palmaz clan uses a small airplane equipped with a high resolution multi-spectral camera to identify the chlorophyll in leaves of every vine (imagine an insanely detailed Google Earth-style  heat signature map drawn down to inch). Those readings tell the viticulturist exactly how much water each individual stalk of each plant needs, down to the microlitre. After the harvest, this digitized scientific experience extends into the seemingly alchemistic craft of winemaking. The fermentation tanks at Palmaz utilize probes that vibrate 10 times per second, yielding millions of data points about the density of the liquid, its sugar and alcohol levels and ultimately revealing the rate of fermentation. Then their proprietary software processes the information and projects a variety of computer-generated data, such as temperature variations, on the dome of the fermentation cave, so the staff can make adjustments. It's not automating the art of winemaking, Palmaz explains, simply arming the artists with power. “We’ve taken a more scientific than artistic approach to winemaking, but we’re not trying to change way the product is made," he says. "We’re just trying to understand the millions of variables and make better choices so we can avoid mistakes and anticipate when good things are going to happen — that’s what technology can really help you do when applied properly.”

Nevertheless, this sort of data-driven wine production has its share of critics. A palpable tension exists between tradition and modernity, art and science.  There are winemakers in the Valley who staunchly refuse to depart from the old ways. Others fear that the sudden exactitude and reliance on data gathering in modern enology will spell the end of something precious and special: the craft and serendipity that make each wine in Napa Valley distinct.

While discussing the benefits of optical sorting technology, which costs more than $100,000, Danielle Cyrot, the winemaker at Cade, wondered aloud if little imperfections in the fruit — a piece of bruised fruit here, a missed stem there — are what give wine some of "its personality and magic."

Silver Oak's Duncan is of a similar mind to Cyrot. Silver Oak has been operating since the early ‘70s, and  Duncan, who took over for his father — a Denver oil and gas man — is unafraid of test any sort of new technology, but he doesn't commit easily. Duncan and his winemaker, David Baron, are using lasers to measure pruning effectiveness and running detailed experiments to see what new tools work and which ones don’t. During their last harvest, they studied the volume and quality of the output of three different brands of optical sorters against the old human method; ultimately, Silver Oak decided they wouldn’t be purchasing another new sorter any time soon.

They work closely with Fruition Science — the same company Chuck McMinn has been working with for decades — trying every sort of new precision viticulture method on offer, ultimately adopting some and rejecting others. “We’re not trying to reinvent the wheel,” Duncan says. “We’re trying to progress.”