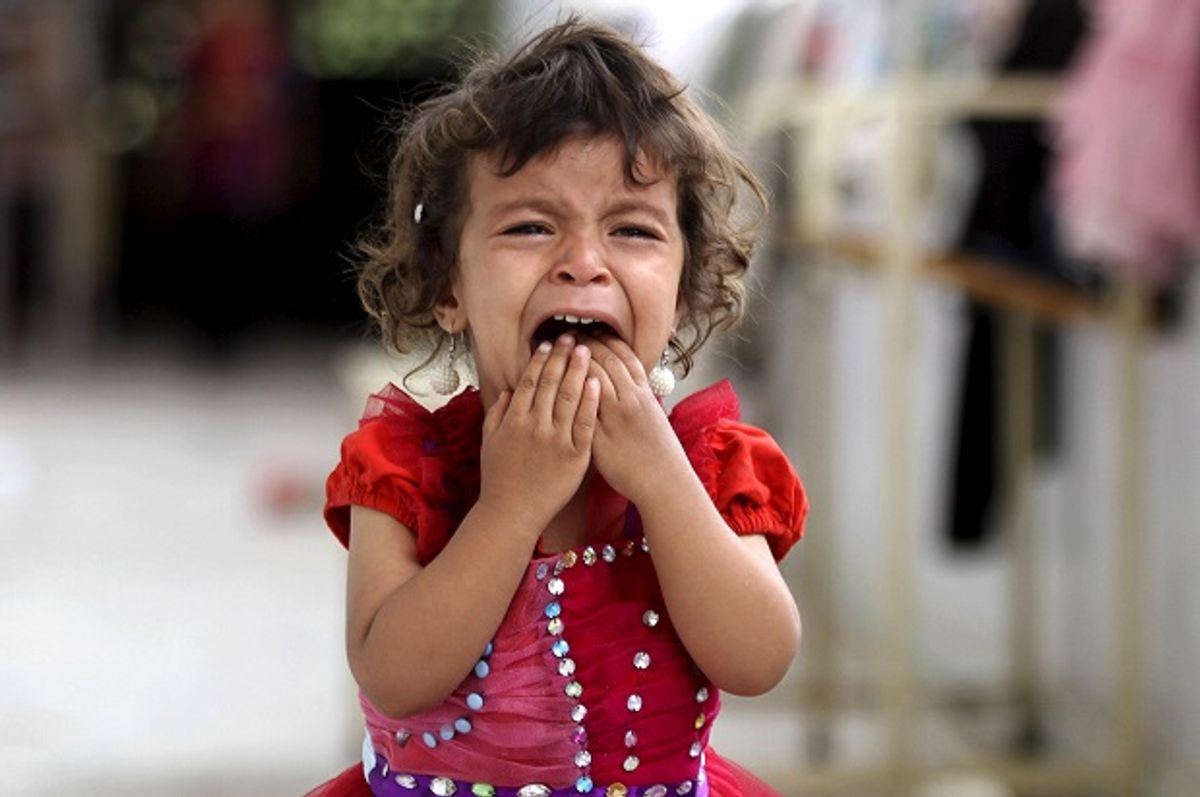 A Yemeni girl cries at a school sheltering people displaced by Saudi-led air strikes on Yemen's Saada province, in the capital Sanaa on August 27, 2015 (Reuters)
--

At least 10 children were killed and another 28 were injured in the bombing of a school in Yemen on Saturday.

Locals and officials say the attack was carried out by the U.S.-backed, Saudi-led coalition, which has been conducting a brutal bombing campaign in Yemen, the poorest country in the Middle East, since March 2015.

International medical humanitarian organization Doctors Without Borders says a medical center it runs received people who were killed and wounded in the attack.

Doctors Without Borders, which is known internationally as Médecins Sans Frontières, or MSF, confirmed the casualty figures, and noted that the victims were all between 8 and 15 years old.

Before the massacre, the children had been studying in their classrooms in the town Haydan, in the northwestern Sa'ada governorate, UNICEF said in a statement.

The U.S.-backed, Saudi-led coalition denied attacking a school, The Washington Post reported. It instead claimed that it had bombed a camp where Yemen's Houthi rebels were training child soldiers. The Post noted, however, that these "claims could not be independently verified."

In October, the coalition also bombed an MSF hospital in Haydan, in an attack condemned by the U.N.

MSF reported that U.S.-backed Saudi-led coalition airstrikes had "flattened" Haydan. Before the October hospital bombing, air strikes in June and July hit several houses, a school and a market.

The coalition has destroyed at least three medical centers run by the medical humanitarian group.

Yemeni pharmacist Sadam al-Othari, who lost his son in the attack, told The New York Times, "They targeted only civilians." He added, "There wasn’t a single gunman or military vehicle around."

Peace talks between Yemeni rebels and the U.S.-backed, Saudi-allied government broke down on Saturday, Aug. 6. On Sunday, hours after the negotiations ended, the coalition launched 30 air strikes throughout Yemen.

More than 6,500 Yemenis have been killed in the war. Human rights organizations have accused both the coalition and Yemeni rebels of war crimes. According to the U.N., however, the Saudi-led coalition is responsible for two-thirds of civilian casualties.

Human Rights Watch and Amnesty International have called for the Saudi absolute monarchy to be suspended from the U.N. Human Rights Council because of its “gross and systematic violations of human rights abroad and at home.”

Meanwhile, the war in Yemen has pushed the poorest country in the Middle East to the brink of catastrophe, creating one of the worst humanitarian disasters in the world.

More than half of Yemen's entire population, 14 million people, are hungry. For more than a year, humanitarian groups have warned that 80 percent of the population desperately needs food and medical assistance.

The weapons the coalition has used in civilian areas,  including widely banned cluster munitions, have been provided by the U.S. and U.K. The U.S. has done more than $100 billion in arms deals with the extremist authoritarian Saudi regime in the past several years.

Moreover, American and British military officials are physically in the command room with the Saudi military, and have access to a list of targets.

“With the intensification in violence across the country in the past week, the number of children killed and injured by airstrikes, street fighting and landmines has grown sharply," UNICEF said in the statement it released on Saturday.

The U.N. children's agency called on "all parties to the conflict in Yemen to respect and abide by their obligations under international law," stressing, "This includes the obligation to only target combatants and limit harm to civilians and civilian infrastructure."