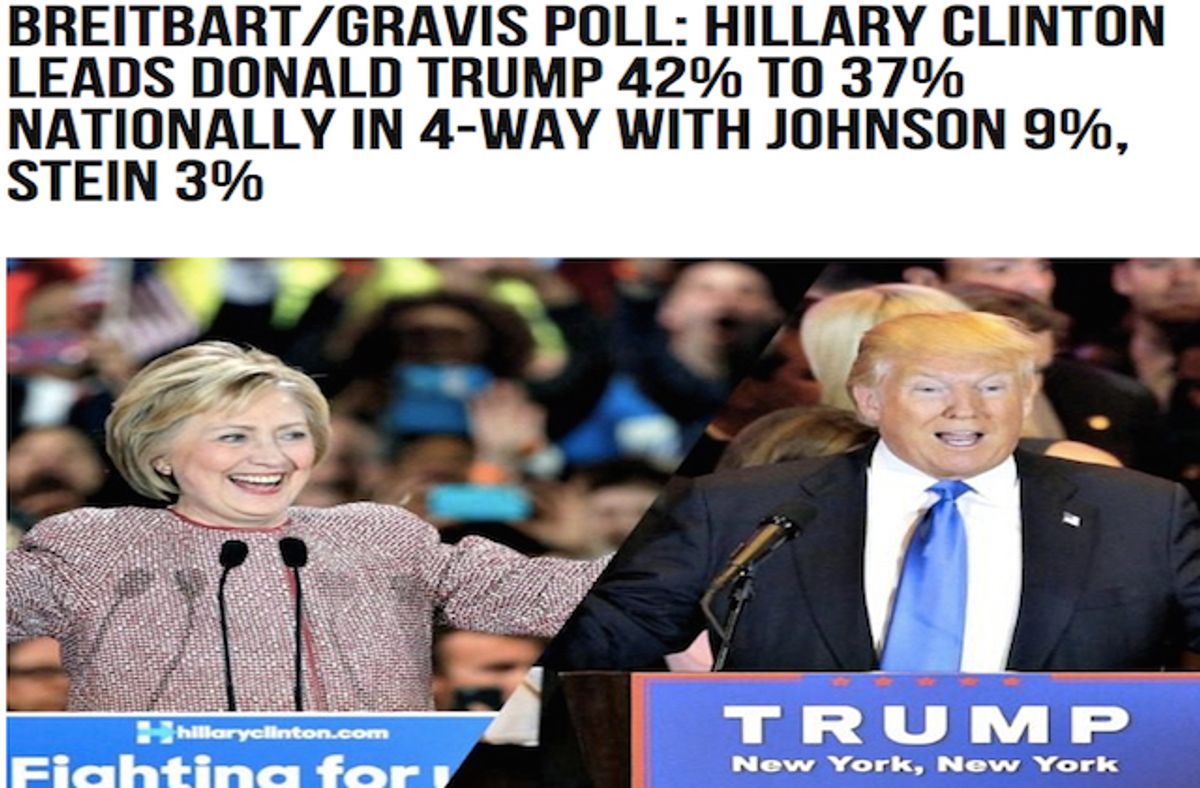 Donald Trump's most ardent supporters, following their candidate's lead,have rejected the ever more ominous post-convention polls showing rival Hillary Clinton widening her advantage over the GOP nominee. While Republicans were forced to "unskew" the polls in the final weeks leading up to the 2012 election, in order to deal with the impending loss for Mitt Romney, Trump's supporters, primed to rage against the librul media, were quick to cast aside poll results from mainstream media outlets -- now even commissioning their own polls.

Right-wing website and top Trump booster Breitbart News released its own poll Sunday, the first for the conservative site.

“It’s an open secret that polls are often manipulated and spun to create momentum for a particular candidate or issue,” Alex Marlow, the editor-in-chief of Breitbart News, said in a statement announcing the poll. “Breitbart News Network’s first national poll marks the start of a major initiative to give our readers an accurate assessment on where the American people stand on the key topics and people of the day — without the mainstream media filter.”

Breitbart's poll was conducted with Gravis, a Florida-based marketing firm, that according to TPM's Allegra Kirkland "has a less than stellar record of tracking state congressional races":

In the 2014 midterm elections, Gravis published polls that were way off in predicting the results of Senate races in Kentucky and Texas. An “informed ballot” survey conducted by Gravis this spring was mocked for getting a Maryland congressional race wrong by 96 percentage points.

But despite their efforts to develop a more Trump friendly survey, according to Breitbart's poll, Clinton is leading a four-way contest with 42 percent of the vote to Trump’s 37 percent. Libertarian Gary Johnson earned 9 percent of the vote, while the Green Party’s Jill Stein received 3 percent.

“In this environment, too many ambitious Republicans are willing to take their chances in 2020 against Hillary Clinton, instead of waiting out eight years of Donald Trump,” Doug Kaplan, the managing partner of Gravis Marketing, said to explain away Trump's lacking numbers. “Former rivals, who should be working to secure his base for him are stirring it up instead, forcing Trump to defend his own base, while reaching outside his base,” he said.

Trump's losing position in Breitbart's poll comes with some of the most favorable conditions found in any poll for the controversial Republican candidate.