"The Night Of" recap: The trial of Naz begins 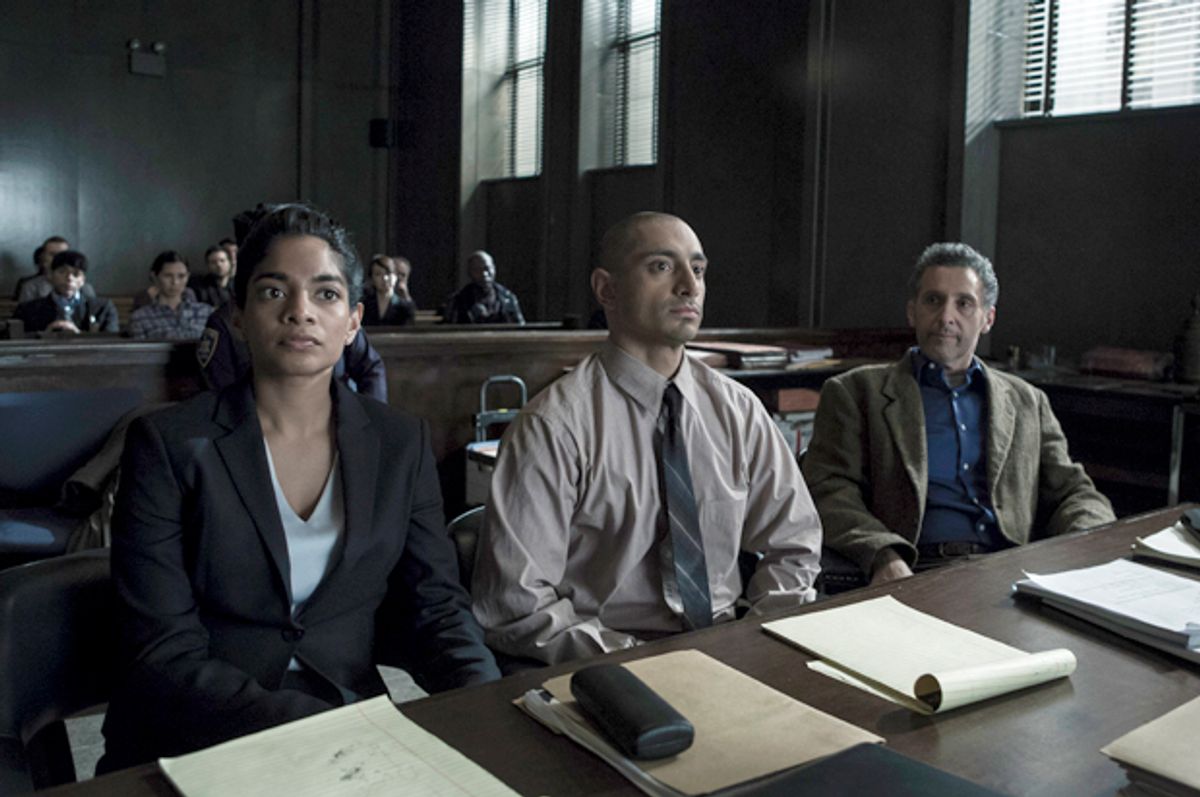 Amara Karan, Riz Ahmed and John Turturro in "The NIght Of" (HBO)
--

When Chandra Kapoor stands in front of the 12 New Yorkers who will decide her client’s fate, she informs them in a cool, confident tone that they must keep an open mind: “Remember this, there’s no burden on me to prove that the defendant didn’t commit the crime,” she says. “It’s the prosecutor’s job to prove that he did.” And in this sixth episode, the most overtly plot-driven, "The Night Of" does narratively what Chandra and her co-counsel Jack Stone must do in the courtroom — establish reasonable doubt. It seems odd to suggest that a show that hinges on a particularly vicious killing and a young man’s slow slide into a hell made of iron bars and slate-gray walls should not, by its nature, be propelled by its story — and yet, “The Night Of” has been so quietly, so consistently character-driven, that this sudden bum-rush of potential suspects feels jarring, although not entirely in a bad way.

The episode’s title, “Samson and Delilah,” evokes the image of a man’s power being stripped away without him even realizing it; until, of course, it’s too late. His head is shorn and cold, the shackles slapped on his wrists. This story has its most obvious parallel in Naz’s slide into a drug-addled oblivion. Last episode, he shaved off the hair that gave him a boyish handsomeness, opting for a bald, hardened look — a look that is now complemented by jailhouse tattoos (“Sin” and “Bad” on his knuckles; and one of Jack London’s cunning wolves on his bicep) and a beefier, more compact build. But swagger alone can’t assuage the shame that keeps him from calling the parents who are breaking themselves in demeaning, menial jobs just to pay for his legal fees, and it can’t save him from the siren call of Freddy’s crack pipe — a quick hit that paints an escape hatch on his cell wall, if only for a moment. Riz Ahmed is maestro of micro-expressions; the smile he gives after that first try is a symphony of bliss and fear and bitter resignation.

It’s ironic, then, that the biblical tale is first introduced by the hearse driver from the pilot, the one who stubbed a cigarette out on the cab’s window as he stonily informed Andrea that she might very well end up as his next passenger. After watching surveillance camera footage from the gas station, Chandra goes to the funeral parlor to speak with the man, who she initially regards as merely a witness. His sickening digressions — good ol’ fashioned Fox-News style slut-shaming peppered with a holy roller kind of woman-hating — quickly pegs him as suspect. As he delicately covers a corpse’s fingernail with deep red polish, he compares Andrea to a cat batting around a ball of string, a haughty animal that needs to be put down. “Are you a cat, too?” he asks Chandra. Amara Karan beautifully layers Chandra’s terror with her resolve to remain stoic (even as a survival tactic). This scene is more genuinely chilling than Jack Stone chasing down the nefarious Duane Reade (who remains MIA this episode), and I imagine that it will linger with many women — or, at least, any woman who must nod politely at that subway creeper who whispers vulgarities from one seat over, or smile at that drunk guy following her home, hoping against hope that this will placate him and he will leave her alone. And alive.

The hearse driver actually gives the show some space to address what I’ve referred to as its “Andrea problem,” an easy willingness to play up the more sad, salacious aspects of our victim’s life, and to suggest that she might be somehow complicit in her own death. So, when D.A. Helen Weiss stands in front of the jury and tells them Andrea’s troubled past is not what they are there to judge, it seems truly meaningful. And it’s one of the few moments when, as viewers who have been trained to feel sympathetic toward Naz, we can really be on Weiss’s side. Jeannie Berlin’s wonderfully rumpled likability has carried this character farther than she might have gone in the hands of any other actress: When a narcotics expert tells her that with all of the drugs in his system, Naz would either be revved up or passed out, Helen quips that she wants the high-flier. Given that the show’s emphasis is on Naz and his defense team (and, at times, almost exclusively on the state of his lawyer’s feet), it’s natural that the cops and the prosecutors appear adversarial; however, their singular focus on Naz has begun to feel less and less plausible, particularly since plucking other suspects from the videotapes is, apparently, as easy as pie.

Detective Box was at Andrea’s funeral, so wouldn’t he have seen the same fight between Andrea’s stepfather, Paul Taylor, and her accountant, the one that Stone happened to record? And if he did see the same fight, it seems odd that such a “talented oppressor” didn’t find his way back to the accountant’s office — where he would have likely heard the same story that Stone did: Mr. Taylor wanted more than his fair share of Andrea’s late mother’s estate, and Andrea angrily insisted that he could only have it “over my dead body” (a rare bit of truly wince-inducing, on-the-nose writing in a show that is usually so much smarter and more interesting). After the first two episodes, Box was poised as a much more compelling presence — and his instinct to check out Naz’s old high school does yield the first evidence that Naz can, under certain circumstances, lash out with violence; teenage Naz threw a racist bully down the stairs, breaking his arm (but, as a basketball coach tells Box, coming perilously close to cracking his skull). However, Box has been more or less sidelined; the most compelling thing about him now is his decision to retire, a decision that seems to be somewhat obliquely related to what seems like his nascent doubts about Naz’s guilt.

I’ve been hesitant to talk about my other key qualm with the show, beyond the “Andrea issue,” which is all the damn real estate devoted to Jack Stone’s feet. Sure, the repetition of doctor visit after doctor visit, uncomfortable cure after uncomfortable cure, conveys the real tedium of living with a chronic condition; but I’m not sure why, exactly, Stone’s eczema has received such obsessive, almost neurotic, attention. In an Indiewire report from the Television Critics Association summer press tour panel for “The Night Of,” writer Richard Price said viewers had picked up on Stone's eczema as “a metaphor for the frustrations of finding a solution and the entire judicial system.” Turning the insatiable itching and calcified scabs into a metaphor could have been more provocative in a series with a longer span of episodes, one that has more time to luxuriate in its quirks — but, as it stands, and as the show burns down to its end-point, this doesn’t accomplish anything that John Turturro’s portrayal of Stone as a smart-ass savant hasn’t already done. Hopefully, Stone’s miracle cure from a Chinatown herbalist will end this subplot once and for all.

Giving Box his due as Stone’s foil, instead of trailing our sore-footed legal eagle through drug store after drug store, would’ve worked better all around. Following Box as he worked some of the same leads that have come up with a whiplashed quickness now would have made the narrative more taut and focused without losing any of the sublime character work that has made this show so exemplary. And it would have bolstered Price’s desire to scratch more deeply into “the frustrations of finding a solution and the entire justice system” by showing that even the most talented oppressor has his headaches and heartsickness over the job. But, much like Samson, the warrior shorn of his power with a few ill-advised cuts, the show feels weaker now. We head into the final two episodes with a worrisome whack-a-mole of possible killers as the defense gets to tell its story in the trial of Nasir Khan.