Why Sanders supporters cannot back Gary Johnson: His libertarianism is antithetical to the senator's Democratic socialism

Yes, there are similarities between Sanders and Johnson — but their political philosophies are miles apart 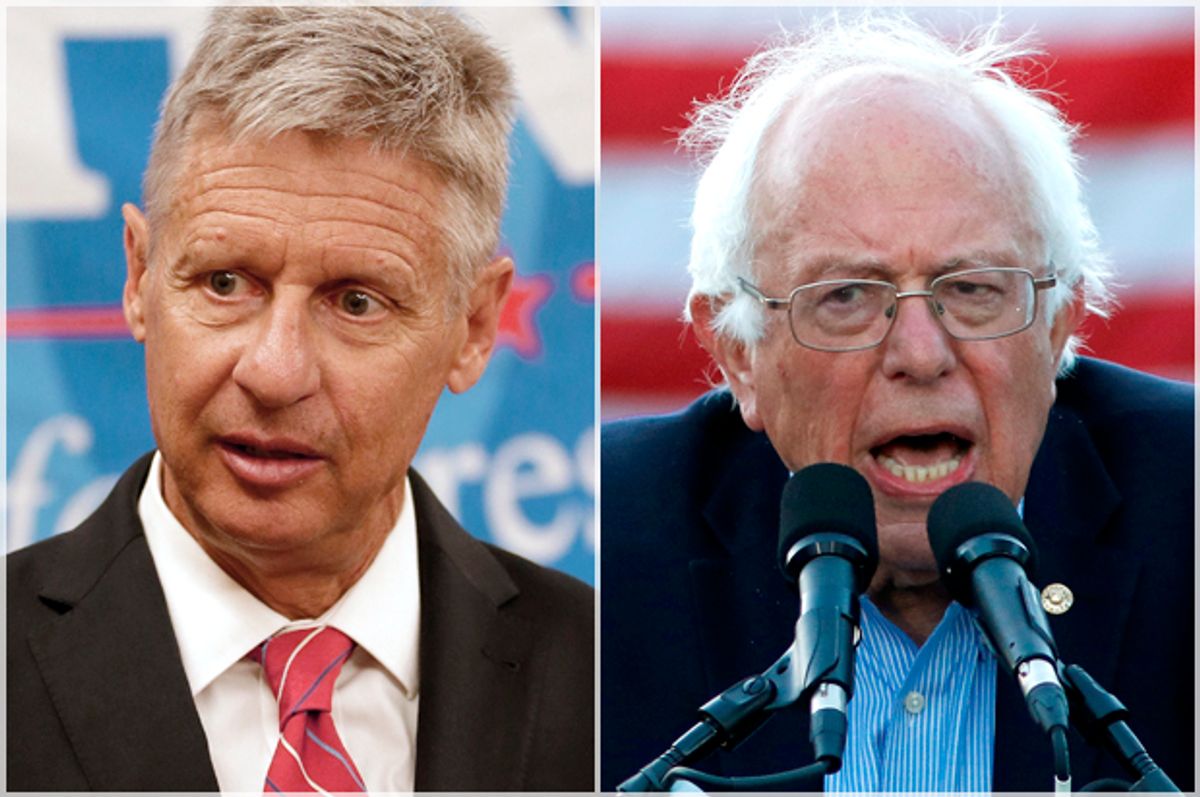 At the Libertarian Town Hall on CNN earlier this month, the Libertarian Party’s presidential candidate Gary Johnson and his running mate Bill Weld made a pitch to both “Never-Hillary” and “Never-Trump” voters on the left and right of the political spectrum as the sane and principled third-party alternative for 2016. And whether you agree or disagree with what the two former governors had to say, it’s hard to deny their likability — especially in an election where the two major party candidates are as thoroughly unlikable as Donald Trump and Hillary Clinton.

Johnson and Weld presumably have a better shot at appealing to Never-Trump conservatives than Never-Hillary liberals or leftists (whose political views align much more with the Green Party’s Jill Stein), but the former New Mexico governor did make a compelling pitch — superficially, at least — to disaffected Bernie Sanders supporters at the Town Hall. And while polls indicate that the majority of the democratic socialist’s supporters will vote for Clinton in November, there is a minority faction that will be voting their conscience — and Johnson is certainly in a position to woo some of these voters.

With this undoubtedly in the back of his mind, the libertarian candidate said that he and Bernie are similar “on about 75 percent of what’s out there,” from marriage equality and reproductive rights, to the legalization of marijuana and the end of futile military interventions overseas. From an “economic standpoint,” however, Johnson admitted disagreement:

“If Bernie supporters are really looking for income equality, I don’t think that is something that government can accomplish. Taking from Peter to rob Paul, that’s an equation that Peter really loves. But if Bernie supporters are looking for equal opportunity, I think that is something that can be accomplished. … In politics, you can definitely stand up for equal opportunity.”

It was a cogent response that included an acknowledgement that “crony capitalism is alive and well” — something that libertarians and leftists have long agreed on (and equally object to). But apart from this, Johnson’s economic worldview is diametrically opposed to Sanders’ egalitarian vision of social democracy — and this should be enough to stop the latter's supporters from voting for the former.

In the economic realm, right-wing libertarians (as opposed to left libertarians or “libertarian socialists”) are essentially classical economic liberals who reject most of the social democratic reforms that were enacted throughout the capitalist world during the 20th century. Instead of a mixed economy, libertarians advocate laissez faire capitalism and profess that even minimal state intervention in the economy will lead to tyranny — or serfdom, as the famous libertarian philosopher F. A. Hayek put it in his influential book "The Road to Serfdom" (this didn’t pan out, of course — instead, it was the welfare state that likely prevented more radical assaults on capitalism in the West).

In his statement, Johnson said that he doesn’t believe that the government can reduce economic inequality — which has soared over the past forty years — and equated redistributive measures to theft. This alone reveals the candidates dogmatic worldview. The social democratic reforms of the 20th century clearly demonstrate that wealth and income inequality can be curbed within a capitalist economy (and should be if leaders want to achieve greater economic and political stability). While Johnson is less fanatical than some of his party colleagues (indeed, he is considered too moderate by many libertarians), he is still undoubtedly the most extreme candidate of 2016 on economic matters. He opposes corporate taxation, supports privatized healthcare, advocates eliminating the progressive income tax and replacing them with a regressive consumption tax, and is a proponent of widespread economic deregulation and privatization (including the privatization of prisons).

Libertarianism may sound good on paper — championing individualism and maximum freedom; but in practice, its laissez faire prescriptions would result in corporate tyranny, the very opposite of freedom (libertarians are so consumed with the threat of state tyranny that they seem unable to even consider the very real threat of private tyranny, or as Noam Chomsky has described it, “tyranny by unaccountable private concentrations of wealth”). G. A. Cohen, the father of analytical Marxism and notable critic of libertarianism, discussed how private property actually inhibits the freedom of the ownerless in his essay "Capitalism, Freedom, Proletariat":

“Private property, like any system of rights, pretty well is a particular way of distributing freedom and unfreedom. It is necessarily associated with the liberty of private owners to do as they wish with what they own, but it no less necessarily withdraws liberty from those who do not own it. To think of capitalism as a realm of freedom is to overlook half of its nature.”

Now, there was a time when the rugged individualism and minimal state intervention that libertarians advocate could have conceivably produced a greater degree of freedom: namely, in a pre-capitalist, pre-industrial economy — before the prevalence of wage-labor and the advent of multinational corporations, when independent producers (e.g. yeoman farmers, artisans, etc.) who sold their own commodities on the market (or simply produced for subsistence) were the dominant economic players. But in a modern corporate capitalist economy in which the richest 20 citizens control more wealth than the bottom half (about 152 million people in America), these notions are not only antiquated, but inimical to both freedom and democracy.

Thus, a Bernie Sanders supporter would have to be grossly uninformed to go from backing the democratic socialist senator to a libertarian like Johnson. Yes, there are similarities between the two; but their political philosophies are so antithetical to each other — particularly when it comes to political economy — that the single issues where there is some agreement are basically irrelevant. Libertarianism is fundamentally opposed to the egalitarian and democratic values that Sanders represents.