Caught in a bad bromance? We should be encouraging man hugs, not mocking them 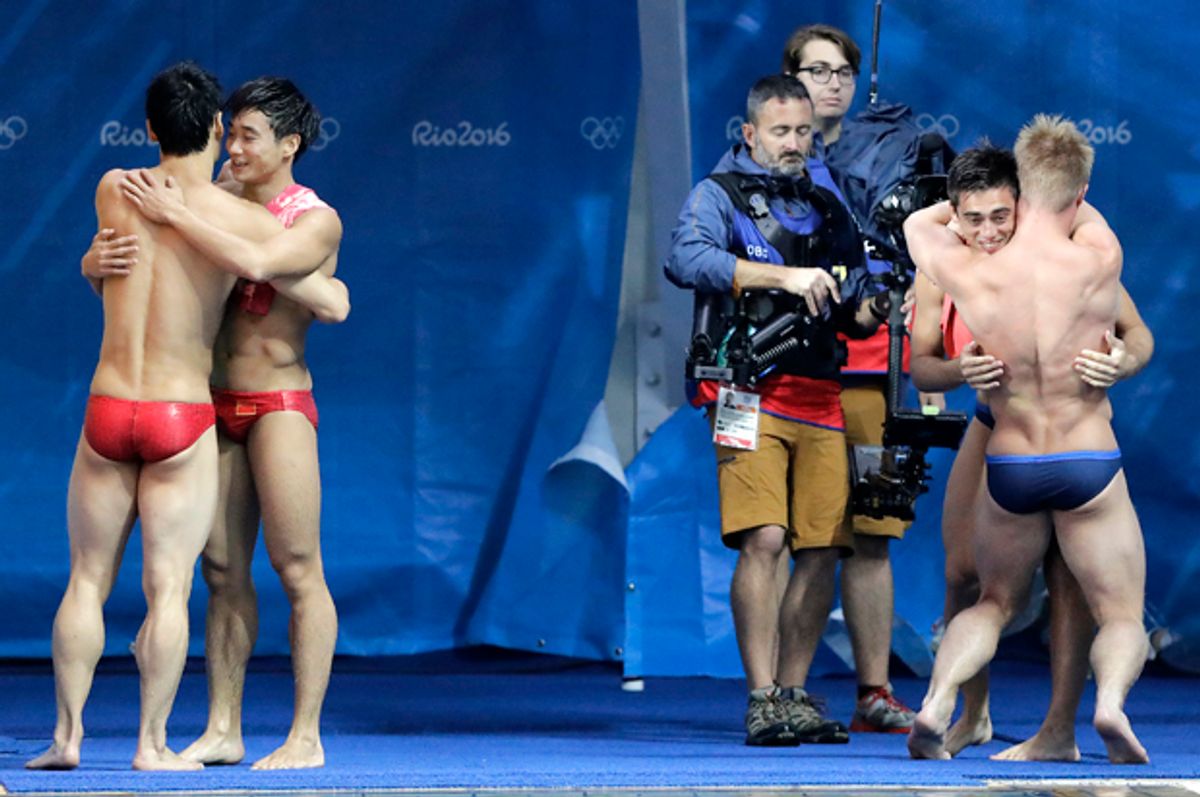 What’s the matter with a hug? Nothing, unless it’s between two men.

Last week, the U.K.’s Daily Mail raised its proverbial eyebrow at an embrace between Chris Mears and Jack Laugher, a pair of British Olympians who had just won the gold medal for the 3-meter synchronized dive. In a photo of the two, Laugher appears to pounce on his diving partner, wrapping his arms around Mears’ neck. The moment is sweet and a bit silly, the kind of rapturous gesture that doesn’t seem out of the question when someone has earned the highest possible honor in his sport.

But to the Daily Mail, there was something questionable — even girly — about their prolonged cuddle, contrasting their elation with a more subdued exchange from the Chinese team. “Britain’s victorious synchronised divers hug for joy after winning gold,” the Mail wrote, “while China’s bronze medalists settle for a manly pat on the back.”

Twitter users decried the gaffe as distasteful, but the Mail is hardly the only outlet to express discomfort at a display of affection between two men, even heterosexual ones.

President Barack Obama’s farewell hug to Jay Carney, his former press secretary, became an instant meme in 2014. BuzzFeed dubbed it “the most awkward hug in White House history.” But what made the moment an object of fascination is its seeming novelty. Most Western men do not exchange hugs as a social custom, and they especially do not exchange prolonged ones. Kory Floyd, a researcher at Arizona State University, suggests that the maximum length for a male-on-male embrace is one second, and anything longer is coded as being romantic or sexual in nature.

To put it bluntly, men shy away from hugging one another not because it’s “unmanly” but because they’re worried about being perceived as gay. Following last week’s controversy, Laugher’s girlfriend went so far as to make a public statement about her boyfriend’s sexuality. (After all, the Olympic partners do share an apartment together.)

The stigma surrounding male-to-male intimacy is a relatively recent phenomenon, a product of the lavender scare of the 1950s. Sen. Joseph McCarthy, who some speculate was a closet homosexual himself, led a purge of gay employees from government offices, as it was believed that queer people were inherently communist sympathizers. In McCarthy’s America, gay people became a pathologized class of individuals, with homosexuality classified as a mental illness by the American Psychiatric Association until 1973. (In many countries, being transgender is still defined as such.)

Before the postwar era, homosexuality was on the minds of few Americans; many might have associated being gay as the effect of a biblical plague, the curse of Sodom. Gay people weren’t a real-world threat. When France decriminalized sodomy in 1791, homosexuality as a lived identity wasn’t thought of. Homosexuality was defined as a behavior not a discrete way of being. Openly gay writer Marcel Proust didn’t introduce the concept into French literature — in his expansive “In Search of Lost Time” series — until 1913.

Without the cloud of anti-gay suspicion around male friendships, same-sex intimacy was extremely common in the 19th century, when it was customary for men to walk around holding hands and even sleep in one another’s beds.

The most famous example of this is President Abraham Lincoln, who shared a bunk with his best friend, Joshua Speed. Carl Sandburg, the revered American poet, was the first to suggest that there had been anything sexual between the two men. He wrote euphemistically in “Abraham Lincoln: The War Years,” a 1926 biography of the 16th president, that their kinship was defined by “a streak of lavender and spots soft as May violets.” (Their possible love nest was re-created by artist Skylar Fein as a potential moment of gay history.)

Lincoln’s sexuality remains an open question, but expressions of affection that break with modern notions of homosociality were many and varied. Daniel Webster, who served as the secretary of state under Presidents William Henry Harrison and John Tyler, was known to refer to some of his male friends as “my lovely boy” in correspondence.

The best illustration of changing gender mores is in “Picturing Men: A Century of Male Relationships in Everyday American Photography,” a book by John Ibson, a California State University, Fullerton professor. His book is a treasure trove of portraits of 19th-century American masculinity, in which male subjects are pictured with their arms draped over one another, hands clasped and sitting on each other’s laps.

Men in the 19th century were, for lack of a better way to put it, all over one another — without the faintest whiff of irony.

Reviewing Ibson’s collection, Alecia Simmonds of Australia’s Daily Life wrote that the lack of similar patterns in relationships today is not merely a product of homophobia but the emergence of women in public life. “The photos in Ibson’s collection were taken during a time when life was incredibly gender segregated,” she said. “Your primary emotional identification was with people of your own gender.”

Women have taken the place of other men as the objects of that affection, as outlets for the male need for human touch and intimacy. A 1997 study from Purdue University showed that 75 percent of men relied primarily on women — particularly their wives or girlfriends — as their sole source of close companionship. While relationships between women were often confessional, based around conversation and disclosure, the study showed that male friendships were less intimate and more driven by activity.

That kind of distancing can be seen today when two men go to the movies together. They leave an open seat between them.

These findings correlate with the overall reality of male friendships: A 2006 survey in American Sociological Review showed that adult heterosexual men have fewer friends than any other population in U.S. society. As Salon’s Lisa Wade has previously suggested, it’s not that straight men don’t want more friends. They do. “Men desire the same level and type of intimacy in their friendships as women, but they aren’t getting it,” Wade wrote.

Not having those desires met can have a deeply detrimental impact on heterosexual males. In a 2013 essay for The Good Men Project, writer Mark Greene called it “touch isolation.”

“American men can go for days or weeks at a time without touching another human being,” Greene wrote. “The implications of touch isolation for men’s health and happiness are huge.”

Gentle platonic touch is key to the early development of infants, Greene noted, adding that it continues to play an important role throughout men’s and women’s lives for their “health and emotional well being, right into old age.”

Men’s desire for intimacy from companions of the same sex is repressed at a young age, Greene said, but this is reinforced throughout their lives through stigma — the suggestion that there’s something less than masculine or abnormal about male-to-male intimacy. When two Russian men filmed themselves walking the streets of Moscow holding hands, they were repeatedly harassed by passersby — called “bitches” and “faggots” and even told to leave the country. Another man forcibly ran into them, hoping to start a fight.

Things are changing, however, along with the advent of a new generation that views homosexuality in a more positive light, thus lessening the shame around potentially being seen as gay.

In a 2014 study published in Men and Masculinities, British researchers Mark McCormack and Eric Anderson found that 98 percent of college-aged men surveyed in the U.K. had slept in the same bed with another man. And 93 percent of those surveyed said they had cuddled a male classmate. “They don’t realize this is something that older men would find shocking,” McCormack, a professor at Durham University, told The Huffington Post. “It’s older generations that think men cuddling is taboo.”

The shifting tides are evident in the embrace of friendships that skirt the line between what might have been considered outré even just a decade ago.

Real-life best friends Ian McKellen and Patrick Stewart went on an extremely affectionate tour of New York after finishing their 2014 run in Broadway’s “Waiting for Godot” in a honeymoon that inspired a million BuzzFeed lists. Members of the former One Direction boy band were often known to affectionately kiss one another or slip their hands into each other’s butt pockets. Those public displays of affection weren’t jeered. They made the band’s female fanbase go apeshit.

It might seem like The Daily Mail’s homophobic flap is a reflection of the current cultural era, but this lingering distrust of close male friendships is increasingly behind the times. Hugging it out doesn’t just feel good. Embracing the bromance makes the world a better, cuddlier place.