Forget blade runners: What if some female Olympians have high testosterone?

Do elevated levels of testosterone give female athletes a competitive advantage? It shouldn't matter 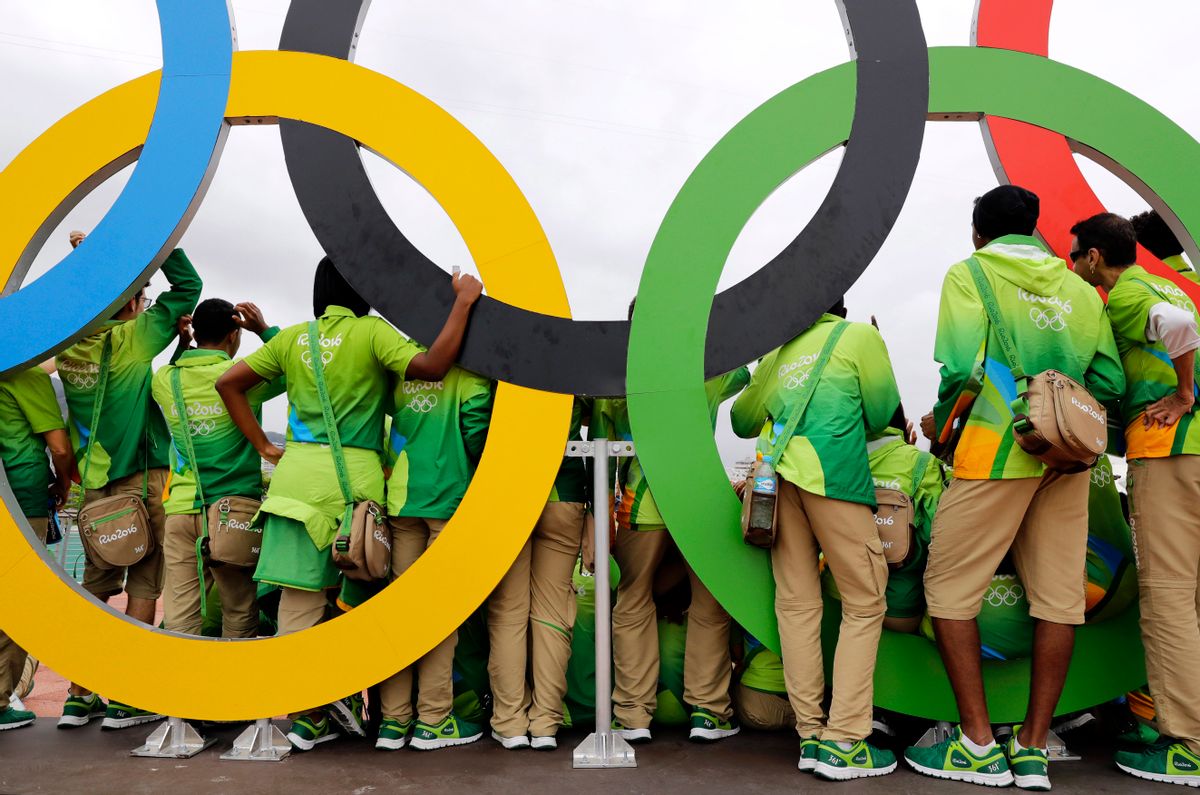 On August 12, Dutee Chand became just the second female sprinter to represent India at the Olympic Games. Her road to Rio has been anything but easy.

In 2014, the International Association of Athletic Federations banned her from competition on the grounds that her body naturally produced too much testosterone, a condition called hyperandrogenism. It wasn’t her fault, the organization explained. But her condition gave her an unfair edge over other female athletes, according to the IAAF policy.

Chand appealed the ruling, and in July 2015, the Court of Arbitration for Sport determined that the IAAF:

“was unable to conclude that hyperandrogenic female athletes may benefit from such a significant performance advantage that it is necessary to exclude them from competing in the female category.”

Arbitrators gave the IAAF two years to produce enough evidence to justify its policy. Until then, the organization must suspend the hormone test. The International Olympic Committee also complied, allowing Chand and other hyperandrogenic women to compete at the 2016 Olympic Games without having to lower their hormone levels.

The Chand case is the just the latest chapter in the long history of sex-testing female athletes in elite sport, something I’ve been studying for a while. Although the tests have changed over the years, the intent — to ensure that female athletes are sufficiently female — has not.

With all due respect, I think asking if elevated levels of testosterone give female athletes a competitive advantage is the wrong question. Instead, we should ask: “So what?”

As the prestige of international athletics grew during the 20th century, critics worried that male athletes might commit “gender fraud” in pursuit of sporting glory. In 1946, for example, the IAAF required female competitors to submit medical certificates to verify their sex.

At the European Athletics Championship in 1966, the IAAF subjected female competitors to a “nude parade” past three gynecologists. This was because, as Life magazine reported, “there had been persistent speculation through the years about women who turn in manly performances.” That same year female athletes at the Commonwealth Games had to undergo gynecological exams to prove their sex. British pentathlete Mary Peters would later refer to it as “the most crude and degrading experience I have ever known in my life.”

In 1967 the IAAF turned to a “simpler, objective and more dignified” laboratory-based chromosome assessment, typically obtained by swabbing the inside of every female athlete’s cheek (the IOC followed suit for the 1968 Olympic Games). An XX result effectively established femaleness. Anything else spelled an end to the woman’s career. But there are a host of genetic and biological variations that complicate the seemingly tidy split between male and female.

Polish sprinter Ewa Klobukowska, for instance, was summarily dismissed from sport in 1967 because she had “one chromosome too many.” The IAAF nullified all of her victories, struck her name from the record books and rescinded her medals, including the gold and bronze from the 1964 Olympics, all because of a naturally occurring condition that probably had little bearing on her success.

At 21 years old, her athletic career was over. “It’s a dirty and stupid thing to do to me,” she said at the time. “I know what I am and how I feel.”

Then there are women with XY chromosomes, such as Spanish hurdler María José Martínez-Patiño. She successfully challenged her 1985 disqualification on the grounds that she also has androgen insensitivity syndrome, a condition in which her body cannot respond to testosterone, either natural or synthetic.

The results of the tests are supposed to be confidential, so we don’t know exactly how many women have been drummed out of sport as a result. Researchers estimate that between 1972 and 1990, sex-testing procedures disqualified approximately one in 504 elite athletes. An untold number of women competing at the lower levels of sport met a similar fate, or else abandoned competition altogether based on fears that they might not meet the standards for femaleness.

From the beginning, there were protests about the ethics, validity and reliability of the tests. By the early 1990s, objections had reached a fever pitch and, in May 1992, the IAAF announced an end to systematic chromosomal testing. The IOC did the same in 1999. However, both organizations reserved the right examine athletes if someone were to “challenge” their femaleness. The ostensibly progressive protocol ultimately discriminates against women who do not look or perform in accordance with certain “feminine” ideals. This is what happened to South African runner Caster Semenya in 2009 and to Dutee Chand in 2014.

Just hours before Semenya cruised to victory in the finals of the 800-meter race at the 2009 World Championships in Athletics, the IAAF confirmed “concerns that she does not meet the requirements to compete as a woman.”

Never clarifying what those requirements were, officials requested Semenya abstain from competition. She obliged for a disquieting 11 months, during which experts worked to determine her sex. She was noticeably slower upon returning to the track (although she won a silver medal in the women’s 800 meter at the London Games in 2012), leading to speculation that she must have undergone some intervention to lower her testosterone. The IAAF’s subsequent policy on hyperandrogenism bolstered those opinions.

This new policy ruled any female athlete exhibiting 10 or more nanomoles of functional testosterone per liter of blood (which they consider the lower end of “normal” male range) ineligible for competition.

Women could apply for reinstatement if they sufficiently reduced their testosterone levels below the 10-nanomole threshold. This can be done surgically, often through the removal of internal testes, with hormone-suppressing medication or through a combination of both. Women with androgen insensitivity syndrome are exempt from this policy.

These guidelines took the place of the earlier “gender verification policy.” Indeed, the IAAF, IOC and affiliated federations erased all mention of sex testing from their rule books and instead initiated the hormone test “to protect the health of the athlete.”

It’s worth noting that male athletes don’t seem to need similar protection. There is no upper limit to the levels of natural testosterone allowed in their bodies. In fact, male athletes with low testosterone can apply for a “Therapeutic Use Exemption” that allows them to take medically prescribed steroids to augment their androgen levels.

The Court of Arbitration for Sport’s decision in Dutee Chand’s case suspends, at least for the 2016 Olympic Games, any testing or exclusion of women on the basis of hyperandrogenism. This creates an incredible amount of interest in the performances of Chand and Semenya and, quite possibly, any female athlete who does not conform to the traditional standards of femininity.

Question of testosterone is missing the point

Dutee Chand did not win medal in Rio, but Caster Semenya, who has grown increasingly faster in past months, is an odds-on favorite to take home the gold in the 800-meter race.

So does excess testosterone actually confer a competitive advantage?

My question is if it does, so what?

Elite sport is built on the back of inequality. We love the myth of a level playing field, but it doesn’t exist. Of the 207 nations competing in Rio, 75 have never won a medal. Wealthy, powerful countries dominate the Olympic Games, while conflicted, war-torn, impoverished countries simply lack the resources to promote sport to the level that will produce Olympic champions. That’s a clear disparity that raises little outcry.

But what we’re talking about in the case of hyperandrogenism is an innate condition that potentially enhances athletic performance. And, as scientists are just beginning to understand, elite sport is riddled with similar endowments.

We don’t disqualify athletes with these types of predispositions. We celebrate them.

With seven Olympic medals, Finland’s Eero Mäntyranta, for example, is among the all-time greats of Nordic skiing. It’s a sport that requires incredible stamina — a trait assisted by an abundance of red blood cells, which carry oxygen to the muscles. That’s why so many endurance athletes try to boost their hemoglobin by training at high altitudes, sleeping in altitude chambers or through illegal measures like blood doping or taking a synthetic version of the hormone erythropoietin (EPO).

Mäntyranta, who died in 2013, didn’t need any of that. He had a condition called primary familial and congenital polycythemia, associated with a variation in the EPOR gene, which caused his body to produce 65 percent more red blood cells than the average male. David Epstein, author of “The Sports Gene,” calls Mäntyranta’s EPOR variant a “gold medal mutation.”

How is this different from a woman’s body that naturally produces more testosterone? Why is primary familial and congenital polycythemia a genetic gift and hyperandrogenism a disqualifying curse? Unless athletic authorities want to take on all conditions that might result in an unfair advantage — biological, genetic, social or otherwise — it seems arbitrary to focus on testosterone in female athletes.