Frumpy old Ford gets what Elon Musk and his company don't: safety features are worth waiting for. 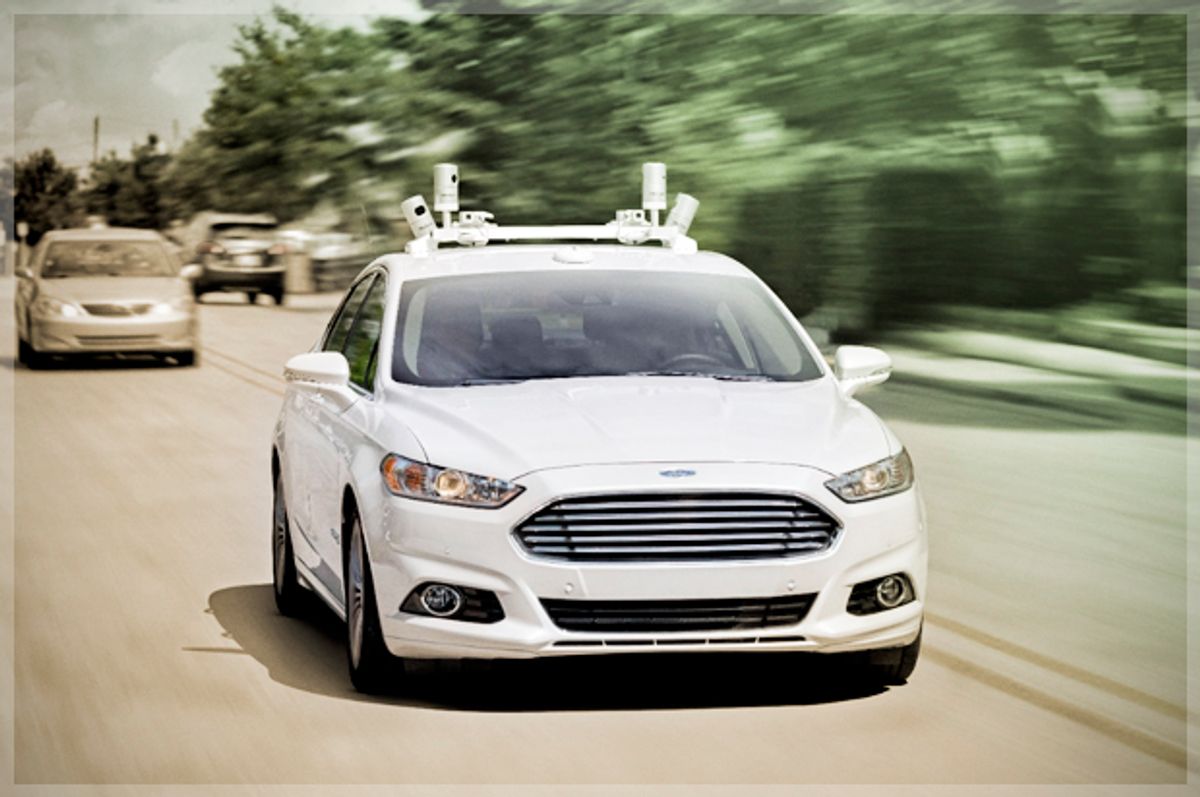 Tesla Motors has taken the lead in the race to deploy more autonomous-driving capabilities, giving the Palo Alto electric car company and its owner Elon Musk major bragging rights. But the billionaire mogul's brainchild, with the dangerously hyperbolic name “Autopilot,” played a role in a deadly wreck in Florida recently. And it lacks a pivotal safety feature that may be worth waiting for.

Tesla's lack lidar (a portmanteau of the words “light” and “radar”), the light-based sensors you might have seen attached to the roofs of prototype self-driving test vehicles. Ford announced plans to deploy these sensors in its fully robotic cars — which it plans to bring to market in just five years. The Dearborn, Michigan, company claims the largest autonomous vehicle test fleet of any automaker, and plans to double that to 60 vehicles by the end of next year.

And on Tuesday Ford announced that it an Chinese search giant Baidu are jointly investing $150 million in Velodyne, maker of the lidar sensor that can be seen crowning Google’s pill-shaped self-driving car, is a concrete step towards making consumer robotic cars a reality. While Musk dismisses lidar technology as inferior and superfluous to his proprietary driver-assistance technology, it’s clear that lidar is where the industry is going.

Unlike Tesla's radar-based system, which uses radio frequencies to detect objects in the environment, lidar uses beams of ultraviolet, visible or near infrared light to render a far more precise 3-D view of the objects around them. The technology has been around since the 1960s and is used widely across disciplines, from studying meteor trails to finding archeological treasures to mapping Taliban-held territory in Afghanistan.

It’s also proving to be the single most effective way to give autonomous cars a highly detailed, 360-degree view of the surrounding environment — obviously a vital component to ensuring a safe autonomous driving experience. Lidar is not without its weaknesses, however. The optics-based sensors can go blind in very dusty, heavy rain or blizzard conditions, giving radar an edge where lidar’s light-based signals can’t penetrate. Under those driving conditions, Musk is right — radar is better.​ But Radar, commonly used in cars for stuff like curb detection, has only more recently been used for longer-range detection, like adaptive cruise control and collision avoidance. Thus far it's not as effective as lidar in most conditions. Ideally, experts suggest, you'd have a car that utilized both technologies. (After all, just because you have airbags, doesn't mean you shouldn't wear your seatbelt, right?)

“In an ideal world you would like to have as much information as possible, from lidar, radar and camera sensors,” Ching-Yao Chan, program manager of Partners for Advanced Transportation Technology at the University of California, Berkeley, tells Salon. “But you also have to consider reliability and cost. "Right now there’s a strong push for lidar, and if the costs and reliability issues can be resolved, that’s a big plus.”

This explains why Ford and Baidu are pouring money into the leading maker of lidar sensors. Velodyne, the Morgan Hill, California-based developer, says it’s already managed to bring down the per-unit cost of its lidar sensor from tens of thousands just a few years ago to $8,000 for its latest prototype — still too pricey for even a top-end Mercedes-Benz S-Class, but moving in the right direction. Velodyne’s president and chief operating officer Mike Jellen told Fortune that the company is aiming to scale production of its sensors and bring prices to under $200 apiece by 2018.

If lidar technology becomes cost efficient — and if researchers and designers can figure out a way to use it without putting those weird spinning cylinders on the top of vehicles —then having to choose between radar and liar will be moot. Every autonomous driving vehicle will be able to have both.

“I believe all of this will settle down in five to ten years when lower-cost lidar becomes available,” he says.

Ford is certainly betting on it, and it’s holding back (along with other automakers) on expanding autonomous-driving features until it can deploy lidar alongside radar.

To the bright minds of Silicon Valley, Ford can seem like a dowdy old company asleep at the wheel. But like other stalwart automakers that sell more cars in a month than Tesla has sold in its 13-year history, Ford is being careful with the introduction of autonomous driving features. They know the risks in the telling drivers they can take their hands off the wheel, and they're willing to wait. Their message to Musk is simple: "It's the safety, stupid."