No, NY Times columnist Paul Krugman is not to blame for the rise of Donald Trump 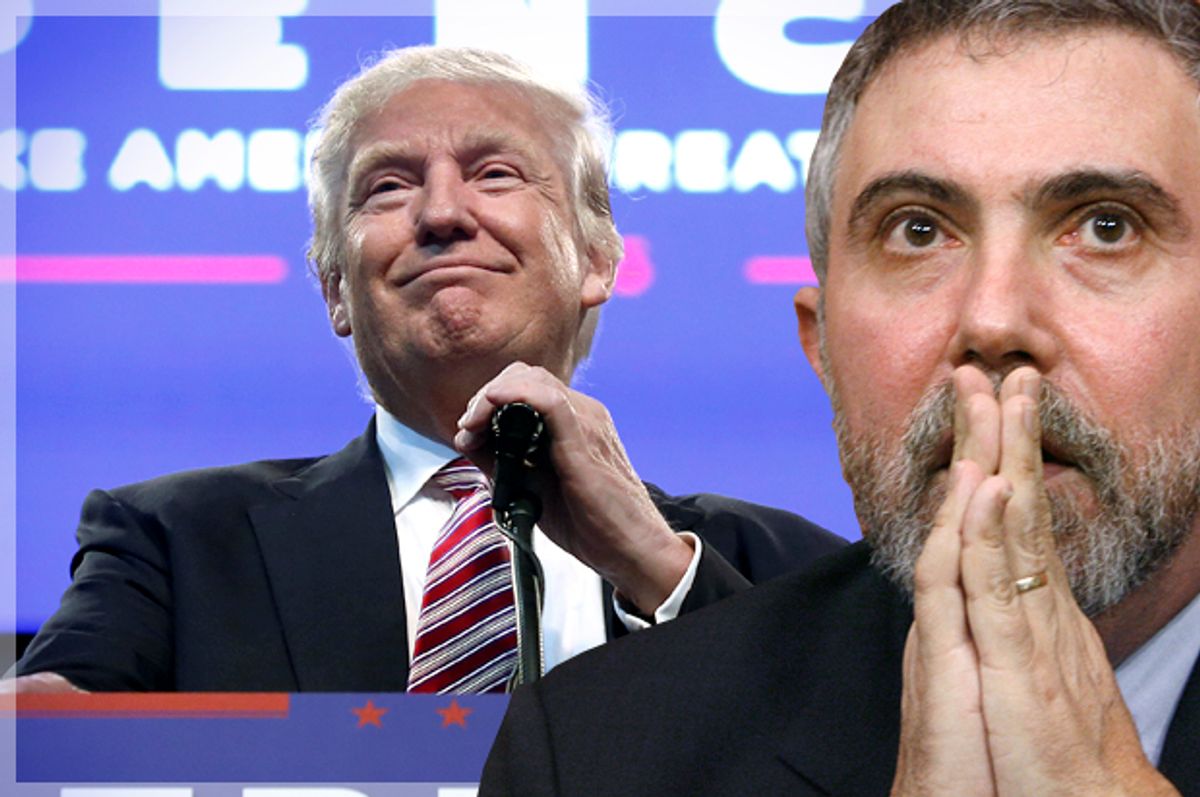 Now that it looks as though the Trump campaign really is in serious trouble, it's time for the conservative movement thinkers to come up with some way to explain how this happened and try to put the pieces back together. They're going to have to apportion blame for this debacle in a way that doesn't blow up whatever is left of their party. So naturally, their first instinct is to blame liberals.

Yes, it's preposterous but it's nonetheless become something of a thing in right-wing circles, the most common trope being that if only the left side of the dial wasn't so darned "PC" about everything people on the right wouldn't be drawn to someone who is so boorish and foul (aka racist and xenophobic.)  You see, if liberals would just speak and think like Trump voters there would be no need for Trump! Therefore, it's their fault not the fault of the voters who chose him.

The latest broadside comes from a piece in The Daily Beast in which Nobel prize-winning economist and New York Times columnist Paul Krugman is taken to task for having cried wolf about Mitt Romney which made all those Trump voters ignore him when he warned them about Donald Trump. It no doubt comes as something of a surprise to the New York Times that Trump voters were once devotees of their paper until they checked into Paul Krugman's critiques of Mitt Romney's bad math and campaign trail exaggerations and decided he lacked credibility. It's laughable, in fact.

Paul Krugman has always called it like he sees it going back to the early days of the Bush administration's lies and omissions about Iraq. He wasn't crying wolf then and he isn't crying wolf now. If Trump is worse than Romney, as he absolutely is, it does not make Romney's budget numbers add up in retrospect. And when Romney said of the 47% of the people who don't pay federal income tax, "my job is not to care for those people, I'll never convince them that they should take personal responsibility and care for their lives," to a bunch of wealthy donors he was using a dog whistle about "dependency" that's just as potent as Reagan's "welfare queen" or Bush the First's Willie Horton ad. That it was more subtle than Donald Trump's blatant racism doesn't make it less racist.

But Krugman isn't the only liberal the right is blaming for the Trumpster fire. One of their more amusing rationalizations is the idea that Bill Clinton is to blame. In keeping with the ever deeper dive into conspiracy-mongering a rumor that Bill Clinton persuaded Trump to run (presumably so his wife would have a weak competitor) has been floating around the campaign since last year. Clinton appeared with Stephen Colbert some months back and confirmed that there's been a phone call but denied they talked about anything pertaining to running for office.  In fairness, liberals have had a chuckle or two over this idea as well which Clinton ruefully acknowledged with his answer to Colbert: "yeah, I get credit for doing a lot of things I didn't do like that."

This isn't a new thing by any means and it takes on many permutations. For instance, conservatives have blamed liberalism for every societal and cultural ill in America for decades. Newt Gingrich built his entire 90s revolution around it, even publishing a list of words including "deviant" and "sick" to describe it. And he had a very special way of holding liberals responsible for things that conservatives actually enabled.  For instance this comment after the massacre at Columbine:

I want to say to the elite of this country — the elite news media, the liberal academic elite, the liberal political elite: I accuse you in Littleton … of being afraid to talk about the mess you have made and being afraid to take responsibility for things you have done, and instead foisting upon the rest of us pathetic banalities because you don’t have the courage to look at the world you have created.”

After the mass killing at Virginia Tech in 2007, Gingrich was asked if he stood by that comment in an interview with George Stephanopoulos. Of course he did:

STEPHANOPOULOS: But what does that have to do with liberalism?

GINGRICH: Well, who has created a situation ethics, essentially, zone of not being willing to talk about any of these things...we don’t have any discussion about what’s happened to our culture because while we’re restricting political free speech under McCain-Feingold, we say it’s impossible to restrict vulgar and vicious and anti-human speech.

Needless to say, Gingrich gets very angry when gun safety advocates suggest that curbing the proliferation of deadly weapons might be a way to reduce the 33,000 gun deaths per year --- because it's wrong to politicize tragedy.

The irony of conservatives accusing liberals of being responsible for Donald Trump because they have allegedly cried wolf so often about Republican politicians is that this is actually true in reverse. The right has spent decades accusing Bill and Hillary Clinton of every crime in the book from murder to treason and they continue to do it to this day. And yet for all the endless investigations and media frenzies, nothing ever seems to pan out. Bill Clinton had a 73% approval rating the day after the Republicans in the House impeached him. Hillary Clinton appears to be on the cusp of becoming the first woman president in US History.

The endless inane accusations over a quarter century have made a majority of the country tune it all out. Perhaps these folks should take their own advice and stop accusing Clinton of crimes she didn't commit. It doesn't seem to be working out for them. It won't work to blame liberals for Trump either. He's their creature through and through.