Hashing out the end of "The Nightly Show" with Franchesca Ramsey: "You can’t force people to have conversations they’re not ready for"

Salon talks to the comedian about working with Wilmore, late-night diversity, getting the bad news and what's next 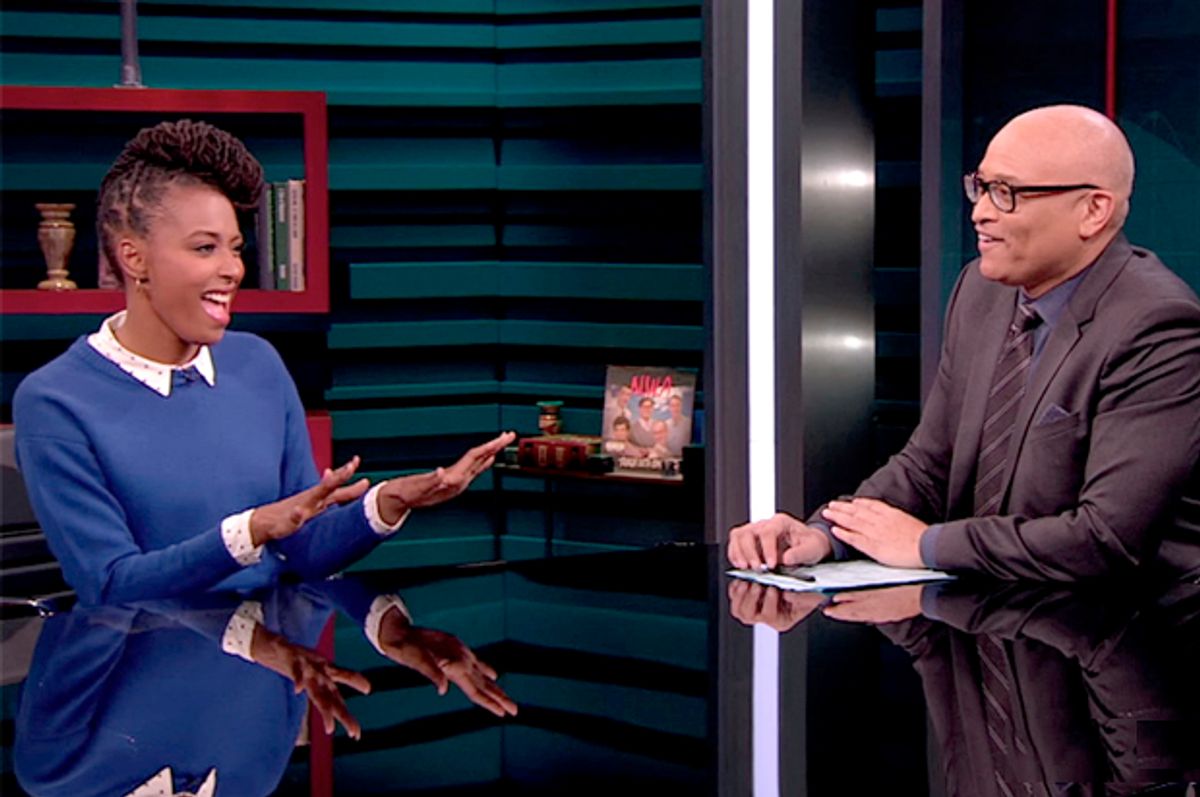 Watching “The Nightly Show with Larry Wilmore” over the last few days has felt less like attending a funeral and more like participating in a rally — a rally with a full-stocked minibar, thanks to Wilmore’s former colleagues from “The Daily Show,” Samantha Bee and Stephen Colbert, both of whom sent the staff copious amounts of alcohol on Tuesday and Wednesday. But it was a rally nonetheless.

Contributors have been on fire during their segments, while Wilmore has cheekily imbibed during his monologues. In front of the cameras, the “Nightly” people are heading into the cancellation with bright punch lines and sharp sarcasm as always. But while “The Nightly Show” host has spoken to a number of outlets about the talker’s cancellation, we thought it would be interesting to speak with one of the show’s staffers about the mood during its final hours.

After all, when the lights go out on “Nightly,” Wilmore will still be an executive producer on upcoming HBO comedy “Insecure.” He won’t lack for opportunities. His staff, including contributor Franchesca Ramsey, is much more, shall we say, available.

Ramsey is a relative newcomer to “The Nightly Show,” having joined as a writer and contributor in February after previously appearing as one of its guests. Her regular segment, #HashItOut, showcased biting analysis of social media idiocy, a subject she’s all too familiar with thanks to her work on the MTV News web series “Decoded,” which she’s hosted since 2015.

Salon spoke with Ramsey the morning that “The Nightly Show” finale was to air to find out what the mood’s been like behind the scenes and to discuss the show’s legacy. (Note: This interview has been lightly edited for length and clarity.)

Take me into what it was like in the writers’ room, when you all found out what had happened.

We all found out as a staff. It wasn’t just the writers. They brought in everybody. You know, it was one of those things where we got an email the night before, telling us to not come in for our regular morning meeting, to come in a little bit later. I feel like that’s when we knew something was up. Because we knew that we would get news about the show being picked up, but we didn’t know what the news would be. From that, we kind of guessed it wouldn’t be positive.

It wasn’t just the writers, or the contributors. It was the entire staff, which includes the crew working in the studio — all of the editors, all of the graphics people, all of the administrative team. . . .  It was really nice for all of us to be together and kind of just reflect on all of the great stuff that we’ve done, in addition to kind of taking in the news that we wouldn’t be moving forward after this week.

Let’s say the show had been picked up. Did you as a team have any specific stories or goals for coverage? For instance, did you say, “Within the next couple of months leading up to or even after the election, I would like to cover X?”

No, I think the fun and the challenge of our show is that we really react to what’s going on in the world. We’re really informed by whatever’s going on, whether that’s positive or negative. And this election has been very trying and confusing. So we were doing a lot of coverage of the election and, as much as I’ve been kind of nervous about this year’s election, I’ve been looking forward to us finding creative ways to really analyze what’s been happening, and maybe kind of bring some levity in a time [when] I think a lot of people are stressed and confused and really worried about the direction our country is going in.

One of the things I’ve noticed in the last few shows is that it seems like there has been a sort of freewheeling atmosphere around the roundtable. Has the energy [behind the scenes] changed at all? Is there a notion of “All right, if we’re going to go out, we’re going to go out like this?”

We’re kind of doing what we’ve always done, which is being honest and poking fun at ourselves. That’s what we’ve been doing every night, whether it’s starting the show reflecting on the fact that Stephen Colbert sent us a ton of alcohol, you know, and people were drinking on the panel and making jokes about that. And Sam Bee sent us a whole bunch of wine, and Larry was drinking wine the whole episode on Tuesday.

We’re just kind of laughing at the fact that it’s sad that we’re ending. But we’re going to do what we do best. Especially because it feels like there are more people watching this week, which is one of the bittersweet consequences of being cancelled. It seems like we have more eyes right now, and so we really want to show people that, you know, this is unfortunate. We are good at what we do, we’ve been good at what we were doing, and I think we’re just kind of proving that we will be missed in this space.

What I’ve found remarkable about Larry Wilmore, just as a viewer — and I don’t mean just with “The Nightly Show,” I’m also referring his work on “Black-ish” and especially with Issa Rae — is that I have not seen a producer promote women of color as prominently as he has.

No. For me, that’s one of the things that I’m most disappointed about, us leaving the show. We also have Grace Parra, who is a Latina. We don’t have this level of diversity in late-night television, in television period.  I mean, there’s three black women as contributors. Holly [Walker] also used to be a writer, but Robin [Thede] and I are writers. Robin also started off with the show as the head writer. She was the first black female head writer in late-night television. Those are huge, huge risks. Our director is black. We’ve got a super-diverse crew actually in the studio. It’s a very mixed, racially, office which is really, really refreshing. And I think it was a testament to the type of show we wanted to produce and the type of environment that gave us a chance to highlight a lot of voices you don’t often see in late-night television.

One of the things that I observed in writing about “The Nightly Show’s” cancellation is that it may be difficult for a mainstream, broad audience to come to a late-night show that has so many conversations about race from so many different angles. Looking at all the coverage, what has been your impression of how people have interpreted the reason that it was cancelled?

There’s a lot of things. We didn’t shy away from conversations about race on our show. But even more recently, we really focused on the election. And with what’s been happening in our world, we had so many stories about police violence. And we’ve had so many stories about sexual assault, and we’ve covered all of those in the most critical and honest and comical ways that we could while still being respectful to the stories.

So I don’t think necessarily that we went looking for stories about race. There just happened to be a lot of them, and we felt compelled to address them.

What was interesting to me — and this is something that I hear about my work a lot that I don’t think is a fair criticism — is that people at times view that as hating white people. That just talking about inequality and talking about racism, talking about these issues [is] somehow blaming all white people. We have a large white audience in reality.

With some people, their guilt gets in the way of being able to absorb some conversations and realize that they’re not being blamed. No one’s being blamed at all.

People call me Hitler. I never, in my life, encouraged hating anyone or separating myself from anyone. But you can’t force people to have conversations they’re not ready for. And as much as I think having these conversations is really important, there are some people who are never going to be ready for them.

So, I think there are people who were resistant to the content for that reason and then assumed, maybe just from getting a taste of it, that that’s what our show was about. In reality, we did have episodes where we did not talk about racial issues or we just focused on the election or we just covered LGBT issues or women’s issues.

Again people were clouded by the times we did talk about race and maybe felt judged or turned off as a result.

Plus, if you actually were a racist, and you won, you’d have to go home to your husband and say, “Well, that’s it for us!”

Yeah! And here’s the thing — I’m glad you brought that up, actually — because personally, I hate when people bring up my husband because there are racist white people who sleep with people of color. There are people who have their own internal biases, who raise children of color. And they don’t realize that.

Sometimes people are confused by the fact that my husband is white. But I don’t bring him up to justify that I’m not a racist. It’s inconsequential of who you sleep with. The ability to have sex with someone of another race does not mean you are not a racist, the same way that rapists have moms and sisters and date women and are still misogynists who hate women.

If you are accused of something, your ability to back up your beliefs should be enough rather than [saying], “I have a black neighbor!” or “I work with white people!” I don’t take that as an excuse from someone who defends their racism, so I would never use that as an excuse when someone tries to accuse me of being racist.

What’s next for you, at this point?

I don’t really have anything concrete, and this just happened on Monday. It’s only Thursday! I still host my series for MTV News. We just kicked off Season 4 yesterday. We’ve got 11 more episodes in the pipeline. So that’s something I usually work on on the weekends. Now I’m going to be able to work on that during the week a little bit more, which is nice.

I do a fair amount of public speaking, but I had to pull back because I had a full-time job. I’m writing a lot. I have a writing partner who I’ve been developing a scripted series with. And we’re just in the process of trying to kick that around and see if there’s an opportunity for that to find a home on television, or find a home online. We’d be very happy with either of those possibilities.

Going back to auditioning. Before I was working here I’d be auditioning pretty regularly. Those are things I still want to explore. I still want to be on television as a writer or performer or both. When the right opportunity comes along, I hope that I’ll be able to seize it and make as much of an impact as I was able to do here on “The Nightly Show.”