Milwaukee's violent protests are no surprise: Even by American standards, the city has long mistreated its black community 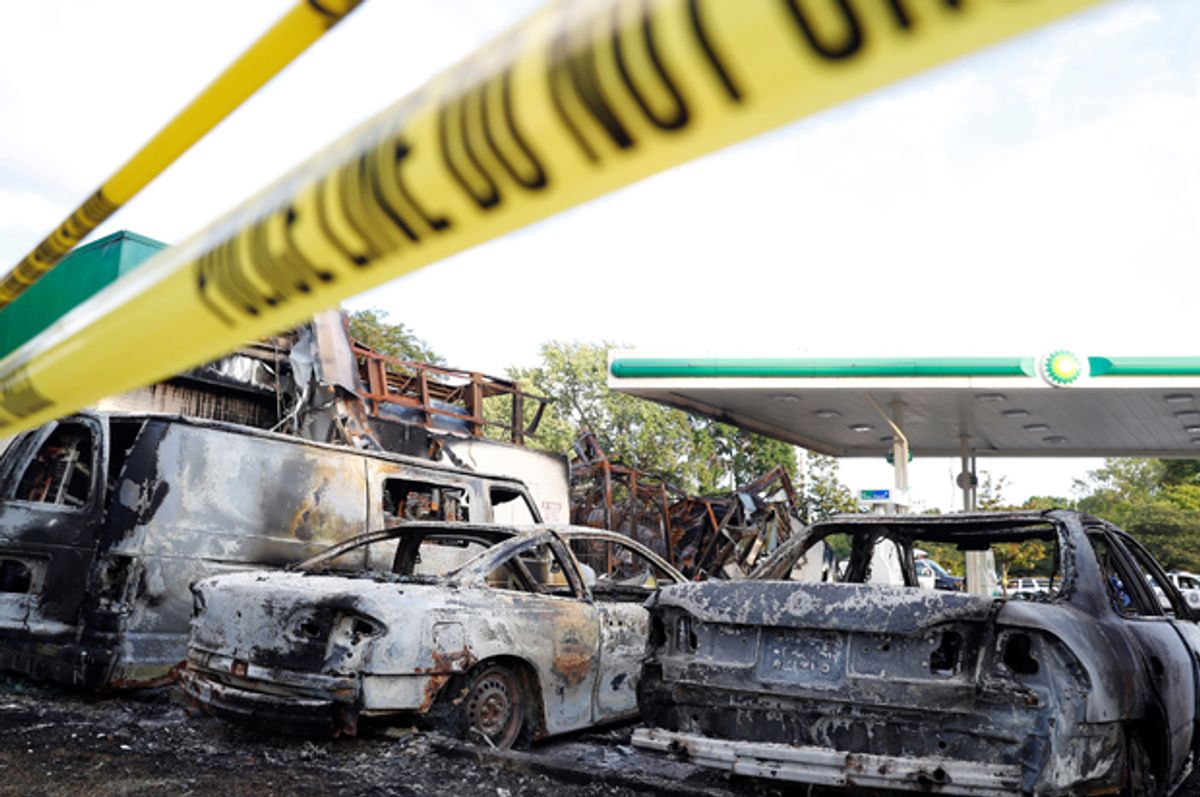 Last Saturday, a Milwaukee police officer shot and killed a 23-year-old African-American named Sylville Smith. Smith was allegedly pointing a pistol at the officer. The shooting was followed by unrest in the largely black neighborhood of Sherman Park. During the course of those events, several police cars were damaged and several businesses and other buildings were destroyed. Two police officers suffered minor injuries during the several days of unrest.

The Smith shooting was the immediate and proximate cause of the violent protests in the Sherman Park neighborhood. As has been seen in other black and brown, urban, working-class and poor communities — most notably Ferguson, Missouri, and Baltimore -- the origins of the discontent in fact go much deeper. In reality, outbursts and spasms of violence against the police and other symbols of state authority are the reverberations of deeply entrenched structural racism and class warfare, forces that conspire to limit the life chances of the black and brown poor and working classes in the United States.

To wit: the city of Milwaukee is the most racially segregated city in the United States and has been described as a “living hell for black people.” The neighborhood of Sherman Park is one of the poorest in the state of Wisconsin. In 2014, the median income for blacks in Milwaukee was $25,600, as compared to $62,600 for whites. Milwaukee is among the worst five cities in the United States on measures of racial equality. As detailed by reports from the Department of Justice on Baltimore and Ferguson, the black denizens of Milwaukee, like most other black and brown folks who live in similar communities, often see their rights and liberties violated by police and are treated as second-class citizens in their own country.

For example, Wisconsin incarcerates more black men per capita than any other state; the Milwaukee police racially profile black drivers; more than half of the city’s  black men in their 30s have been incarcerated; the Milwaukee police were conducting illegal "body cavity" searches of black people in public and were subsequently forced to pay a $5 million settlement because of such abhorrent behavior. This is part of a broader pattern in which police violate the civil rights of black people in Milwaukee.

Racism and class prejudice intersect in many ways in communities such as Milwaukee. Because of the enormous gap in wealth and income across the color line in the United States, racially segregated housing creates disparate outcomes in the quality of public schools, access to health care and public services such as mass transit. Racially segregated housing also increases poverty and violence by concentrating it in one community. It also limits intergenerational upward class mobility by creating social networks that are homogeneous by race and class. Consequently, racially segregated housing limits access to social capital and access to job opportunities that could enable poor and working-class people to improve their life circumstances.

Almost 50 years ago in 1968, the Kerner Commission outlined a set of policy suggestions and diagnoses for the urban rebellions that had recently occurred in black neighborhoods across the United States. The introduction to the Kerner Report could easily be applied to America at present:

What happened? Why did it happen? What can be done to prevent it from happening again? ... This is our basic conclusion: Our nation is moving toward two societies, one black, one white — separate and unequal … The alternative is not blind repression or capitulation to lawlessness. It is the realization of common opportunities for all within a single society … Violence and destruction must be ended — in the streets of the ghetto and in the lives of people … Segregation and poverty have created in the racial ghetto a destructive environment totally unknown to most white Americans.

The Kerner Report, and subsequent research by sociologists and political scientists, would also show that the urban rebellions of the 1960s were not “irrational acts.” The individuals who participated in violent protest behavior did so out of a sense of legitimate anger and grievances about police brutality and a lack of economic opportunity. Surveys and interviews also highlighted how the protesters hoped that the “riots” would gain public attention and sympathy for urban communities and their suffering under racism and classism.

As was seen in the aftermath of the Ferguson and Baltimore rebellions, the corporate news media (especially the right-wing echo chamber) would rather generate a sensational and exaggerated narrative about the recent unrest in Milwaukee than engage in a substantive discussion of the structural and institutional factors that nurtured it. There are many reasons for this. Most Americans are socialized from birth to believe in the twin myths of meritocracy and individualism. This makes systemic or systematic thinking about how social institutions and power interact to determine a given person’s life outcomes and life chances very challenging. In the post-Civil Rights era, a regime of “colorblind racism” deems that racism is narrowly defined as either something extreme and obvious (the Ku Klux Klan or neo-Nazis) or alternatively as words, actions and intentions rather than outcomes and social structures.

Together, these forces combine to mask how there can be individual black and brown people in positions of power and authority (the president of the United States, or the black police officer who shot Sylville Smith in Milwaukee) who are nonetheless embedded within systems and institutions that combine to perpetuate white privilege and to disadvantage nonwhites. Moreover, the black and brown individuals who rise to power in an institutionally racist (as well as classist and sexist) system must learn its norms and rules, and conform to them, in order to be successful.

During the 1960s, there were more than 100 major urban riots and uprisings in the U.S., far more than the spasms we have recently experienced in cities such as Ferguson, Baltimore, and Milwaukee. In many ways this is surprising: By many social indicators such as housing and school segregation, wealth and income disparities, public services and other measures, blacks (especially in urban America) are doing little better relative to whites than they were almost 50 years ago.

As Dr. Martin Luther King Jr. observed in his “Other America” speech:

“I think America must see that riots do not develop out of thin air. Certain conditions continue to exist in our society which must be condemned as vigorously as we condemn riots. But in the final analysis, a riot is the language of the unheard. And what is it that America has failed to hear? It has failed to hear that the plight of the Negro poor has worsened over the last few years. It has failed to hear that the promises of freedom and justice have not been met. And it has failed to hear that large segments of white society are more concerned about tranquility and the status quo than about justice, equality and humanity. And so in a real sense our nation’s summers of riots are caused by our nation’s winters of delay. And as long as America postpones justice, we stand in the position of having these recurrences of violence and riots over and over again. Social justice and progress are the absolute guarantors of riot prevention.”

In many ways, despite the obvious progress which has been made along the color line in the U.S., for millions of black Americans that sense and experience of oppression still endures. Until the structural and institutional racism and classism that created such a feeling and reality is remedied, there will be more — not fewer — uprisings like the ones that occurred in Milwaukee, Ferguson, and Baltimore.