"Says who?": Top Trump aide melts down when CNN host points out Clinton is leading in every poll 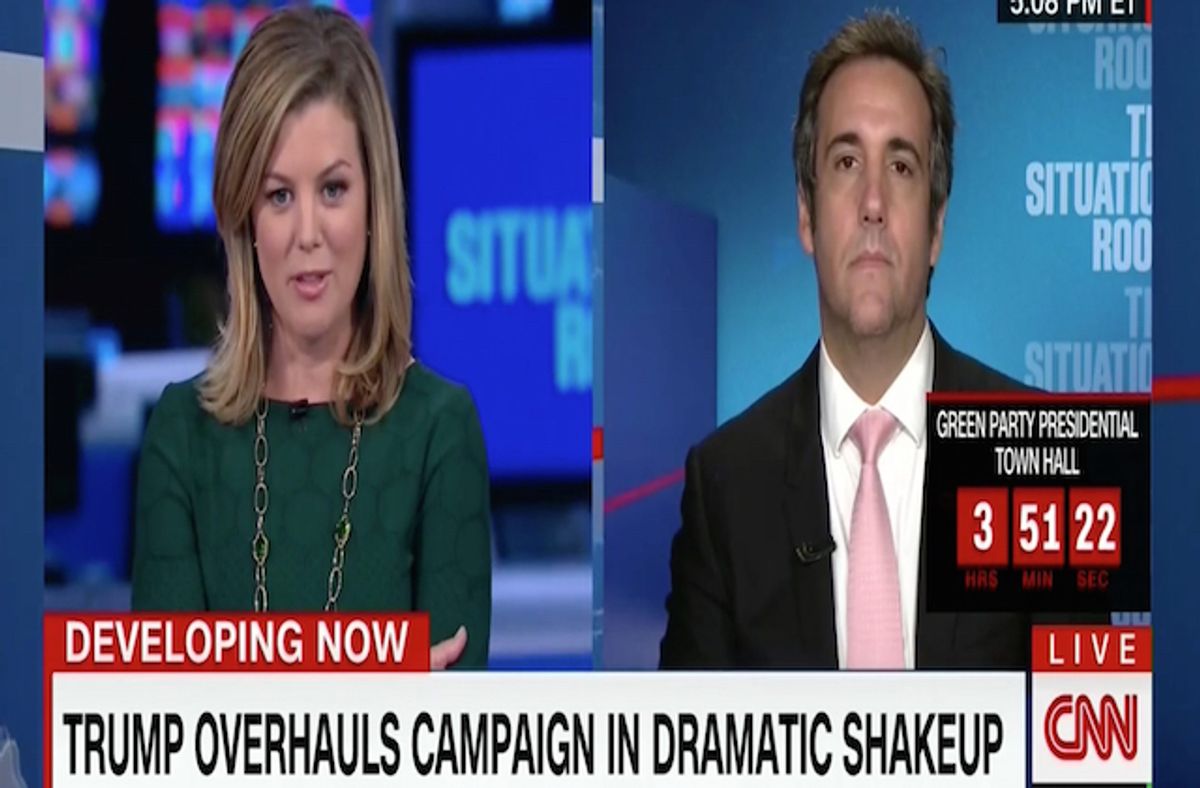 CNN has come under unrelenting attacks from Donald Trump's Twitter fingers all campaign season, but now even his most loyal surrogates are facing blistering criticism from the Trump campaign as they struggle to spin their candidate's apparent implosion.

After a series of on-air blunders from top Trump campaign aides and surrogates (spokesperson Katrina Pierson told CNN over the weekend that President Obama started the war in Afghanistan), Donald Trump Jr. joined Fox News' Sean Hannity to bash CNN (Hannity has his own beef with the rival network after CNN's media critic Brian Stelter called out Hannity's sycophantic coverage of Trump).

“[CNN has] a panel of 8 professional, liberal but professional, people on a panel, and they find like one Trump supporter from the street, who has no real political knowledge, and they just happen to be supporter, and they put that person up against 8 people who do this for a living and try to make it seem like that’s a fair fight," Trump Jr. said on Hannity's radio program earlier this week.

"I mean, it’s so ridiculous I can’t even watch it anymore.”

The next day, Trump Organization special counsel Michael Cohen appeared on CNN to provide one of the most embarrassing surrogate moments of the entire year.

For the third time since clinching the GOP nomination, Trump announced a major shake-up at the top level of his campaign. When asked about the hiring of Breitbart News CEO Stephen K. Bannon, a man who has never ran an electoral campaign, as CEO of the Trump campaign, Cohen debated the semantics. Upset with how the media was characterizing the shake-up, Cohen insisted that the “change-up” was not, in fact, “a shake-up.”

“You say it’s not a shake-up, but you guys are down,” CNN host Brianna Keilar pointed out.

“Says who?” Cohen shot back.

After a brief pause, Keilar answered.

After at least three seconds of silence, Cohen repeated his question.

“Polls, I just told you. I answered your question,” Keilar said.

“All of them,” Keilar then stated flatly.

Cohen would go on to argue that

Despite being rendered effectively speechless by the simple statement that Trump is losing in the polls, Cohen remained resilient.

“I think I unraveled her,” Cohen later told Yahoo News of his CNN encounter with Keilar, boasting that he actually “controlled the interview.”

“I was shocked at the length of the silence as she stumbled to think of an answer,” Cohen said. “And when she did come up with an answer, it was so generic it could have applied to anything.”