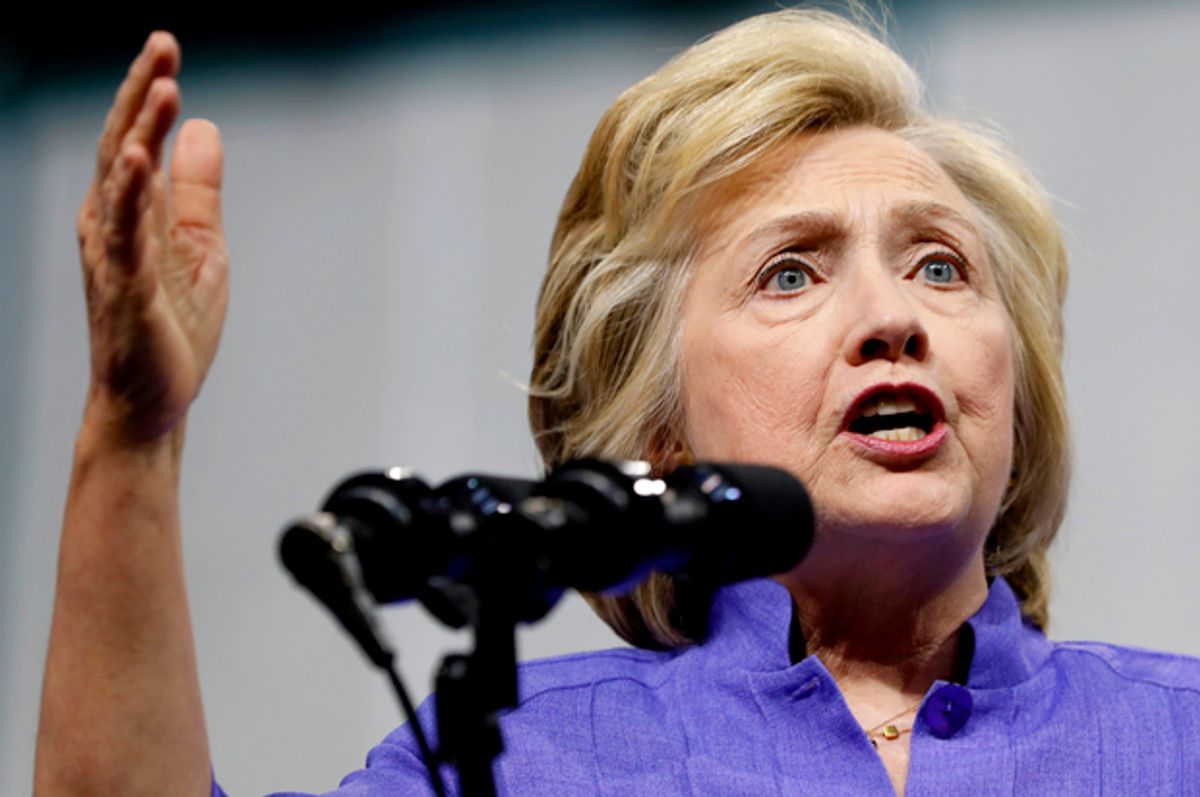 Facebook
Twitter
Reddit
Email
How do we know it's the dog days of August in a presidential election year? Swimmers and swiftboats, that's how. Actually until August of 2004, we used to call swiftboating by other names: whisper campaigns and smear jobs. But after the success of the slick, pre-packaged set of lies about Senator John Kerry's war record this tactic will always be known for the boat that first made Kerry a hero and later destroyed his reputation.

This year, we're treated to an especially ugly form of swiftboating.  The right-wing smear machine is working at warp speed to convince the nation that Hillary Clinton has brain damage. That is not hyperbole or some kind of a joke. They are literally claiming that she is hiding a physical and mental disability that renders her unfit for office. And they are, as usual, being helped by members of the mainstream media who are simply unable to resist "reporting" such a juicy tale even knowing that it is absurd. And so it becomes part of the narrative, true or not, that will color the rest of the campaign and Clinton's presidency should she win.

Karl Rove first crudely suggested that Clinton had a serious brain disorder when she fell and suffered a concussion a few years ago which required her to wear her thick prism glasses instead of contacts to correct temporary double vision. Nobody took him seriously at the time, but the rumor has been percolating in the fever swamps and Trump and company were obviously aware of it. Trump himself has been saying from the beginning that Clinton doesn't have the "strength or the stamina" to be president. He also claims that she can't campaign more than a couple of days a week and then she has to go hide and recover. (This is one of those lies so blatant that it renders people mute — Clinton is clearly campaigning constantly, indeed she's out there more than he is.)

This attack was echoed by Matt Drudge as far back as October when he appeared on conspiracy monger Alex Jones' show and said "she’s old and she’s sick, she is not a viable, vibrant leader for this country.”  It's no surprise then that this latest full blown swiftboat offensive began on Drudge's web site. It's one of his specialties.

On Aug. 7 he linked to an obscure right wing website that had posted a picture of Clinton tripping on some porch steps and being steadied by a couple of aides under the title “2016: Hillary Conquers the Stairs." He neglected to mention that the picture was taken in February.

The next salvo came from Trump's friends at the National Enquirer which published a screaming headline “Hillary Clinton’s Secret Health Crisis.” And according to Ben Collins at the Daily Beast, "by the middle of the day the No. 2 trending Google search about Hillary Clinton was: “Is Hillary having health problems?”

That night Trump surrogate Sean Hannity devoted his show to fanning the rumors, even bringing in the Fox Medical A-Team who appear regularly on the network to diagnose her from afar and demand to see a complete neurological workup and all of Clinton's medical records. He continued the rumor mongering throughout the week.

By this time the fall was old news. Now she was said to be having seizures and speaking oddly and having weird expressions on her face and exhibiting muddled thinking. When a protester tried to rush the stage at one of her rallies and a secret service agent stepped to the podium and said they had things under control, people said he had a diazepam pen in his hand at the ready, apparently in case she had a seizure right there on the spot. (It's all rubbish, of course.)

Meanwhile, the "Alt-right" has gone completely over the edge with this craziness. Collins writes that the conspiracy site Info Wars has turned over its entire site to these rumors:

Hillary Clinton supposedly has Parkinson’s disease, syphilis, brain damage, a brain tumor, autism, a degenerative disease that is giving her seizures and/or strokes, and a blood clot, according to InfoWars writer Paul Joseph Watson. Oh, and he says she has a drug problem. All of these diagnoses — save for Parkinson’s, which commanded a separate full-length article—came in a single one of Watson’s YouTube videos released on Thursday. It now has over 1.6 million views at press time.

And yes the mainstream media has joined in the fun. On MSNBC, Chris Matthews has devoted several segments to the issue, apparently convinced that where Republicans blow smoke there must be fire saying, "what are the Republicans up to on this health issue? Why are they on to this? What do they know? Is there something we don't know in the health records? Something that could change this election around?"

Newspapers are running stories pointing out that she uses a stool on stage when someone else is giving a speech as evidence that she's too weak to stand. Web sites are posting picture arrays of Clinton using a pillow behind her back as if that's a sign that she "needs propping up." Dr Drew Pinsky of Celebrity Rehab weighed in saying that he's concerned that Clinton isn't getting the proper medical care for "her condition." (Even Newt Gingrich called that "junk medicine.") And fake medical records appeared out of nowhere and started making the rounds prompting Clinton's physician to reiterate her earlier declaration that Clinton was a healthy woman capable of handling the duties of president.

Last night Trump surrogate Katrina Pierson took it to a new level by offering up a full diagnosis on MSNBC, saying there are “reports of observations of Hillary Clinton’s behavior and mannerisms,” that Clinton suffers from “dysphasia” — a neurological condition that limits a person’s  ability to communicate or understand speech. I'm going to take a guess that Pierson didn't come up with those talking points herself.

This confluence of activity didn't happen by chance. It was planned and executed from InfoWars to Youtube to Drudge to Hannity to The Daily Mail to MSNBC and finally the NBC Nightly News and The New York Times.   And regardless of what the fact checks say, a whole lot of people in this country now believe that Hillary Clinton, a woman of great intelligence and impressive endurance, is a brain-damaged invalid. Swiftboat mission accomplished.