My dad's first Paul McCartney show: Why his concerts are the perfect intergenerational family outing 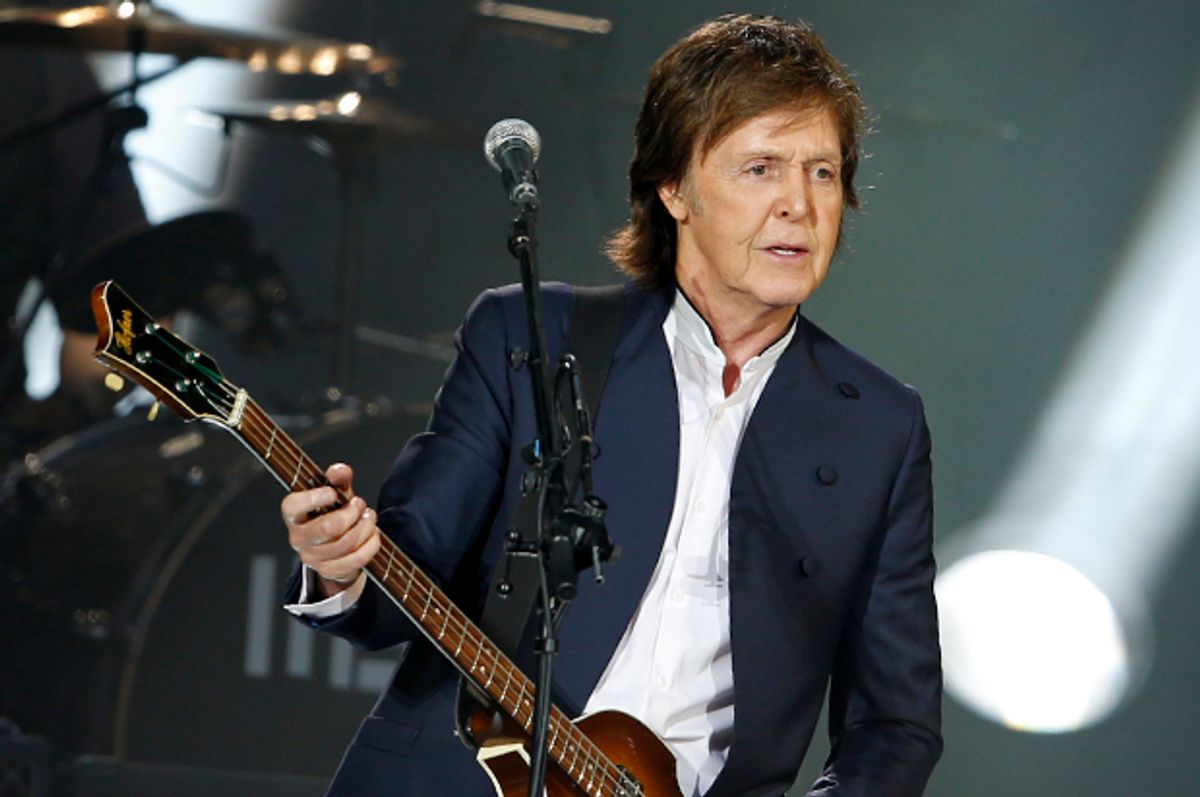 Today, an artist signing a record deal isn't generally that newsworthy. However, when Sir Paul McCartney makes a move, it merits attention. On Wednesday, the Beatle inked a deal with Capitol Records for his "entire body of post-Beatles work, from his 1970 'McCartney' album, through his decade with Wings, to the dozens of solo and collaborative works." The gesture seemed sentimental as well as pragmatic: "This is genuinely exciting for me,” McCartney said. “Not only was Capitol my first U.S. record label, but the first record I ever bought was Gene Vincent’s 'Be-Bop-A-Lula' on the Capitol label." The release also noted that not only is Macca working on a new studio album, but "a comprehensive plan for the artist's catalogue is being conceived" by the new label "in conjunction with the artist and his management team — and will be implemented beginning July 2017."

Since large portions of McCartney's catalog have been reissued in recent years, it'll be interesting to see what shape this plan will take. However, Macca has always been an exceedingly careful shepherd of his own music, especially since his publishing share of the Beatles' catalog has eluded him to date. (That should change in 2018, thanks to U.S. copyright laws.) Perhaps that's also part of the reason why, at age 74, he continues to tour so steadily: He believes — not incorrectly — that he's the best person to preserve these songs and keep them alive, so they remain part of cultural lore passed on through the generations.

Back in the '60s, the Beatles were part and parcel of the rock 'n' roll revolution that separated parents and their children. But by the time the band's fans came of age and started having kids, the sharp demarcation between musical movements had blurred. And so as the years wore on, McCartney shows especially have become a family activity, something parents wanted to make sure their kids experienced. In fact, when McCartney performed at Busch Stadium in St. Louis last weekend, my entire Facebook feed was filled with friends there with families. Parents brought their elementary and junior high school kids — some of whom are also Beatles nuts — to glimpse a legend. Other friends took their parents, paying forward gratitude to the people who likely originally introduced them to the band.

When McCartney landed in Cleveland for two shows this week, the scenario repeated itself: My husband and I took my dad to the first show. (Father's Day gift, sorted!) Growing up, my mom was an über-Beatles fanatic — she still has all of her newspaper clippings, including a healthy bunch from a Liverpool pen pal — but declined to go to this show, since she saw the real thing back in the '60s. My dad, however, was game to see McCartney — his first time catching the legend. And he was clearly impressed, singing along to the Beatles' "We Can Work It Out" and "Love Me Do" — "I know all the words," he told me — and taking video of the panoramic, starlight-studded stage scenery and crowd singing during "Let It Be." He was also startled by the rather impressive display of pyro during Wings' "Live And Let Die." (Which was completely understandable: Not only was it loud, hot and sudden, but it was pervasive on the stage, rivaling that of a metal show. Well played, Paul.)

As an adult, I cherish being able to share a concert like this with my dad. Growing up and carving out your own life and family changes your relationship with your parents. Revisiting (and reconnecting with) your common ground is a powerful thing, especially when it involves music. The medium is a great equalizer: My dad's experience with the Beatles and Wings is vastly different than mine, since he grew up with them, but our different perspectives converge seamlessly when hollering along to "Ob-La-Di, Ob-La-Da" or "Band On The Run." In the coming years, when classic rock, country, folk and jazz legends start retiring from the road, these opportunities are going to become few and far between.

It also helps that a McCartney concert looks back without using nostalgia as a crutch. His song selections on this tour are a big part of that: Turns out the synth-perforated "Temporary Secretary" was decades ahead of its time, while the Beatles' "Being For The Benefit of Mr. Kite!" clearly spawned countless modern indie bands. McCartney is also playing a healthy amount of stronger recent material. (Yes, even "FourFiveSeconds," his collaboration with Kanye West and Rihanna, came off well.) And the members of his long-time touring band — guitarist/bassist Brian Ray, guitarist Rusty Anderson, drummer Abe Laboriel Jr. and multi-instrumentalist Wix Wickens — are ace musicians. (They’ve all also never lost the "Holy shit, we're playing with a Beatle!" vibe and urgency, either.) The harmonies on "Eleanor Rigby" were haunting and elegiac, while the anthem "Hey Jude" ended in a bluesy, rickety jam.

Plus, it's clear that McCartney still really enjoys performing live. He was in a jubilant mood in Cleveland, punctuating familiar stage stories (Jimi Hendrix learning "Sgt. Pepper's Lonely Hearts Club Band" and playing it live two days after the LP's release; performing in Russia and hearing that government bigwigs learned English from Beatles LPs) with more animated gestures and embellishments. He did little dance moves that resembled a prize fighter, soaked up the crowd's adoration and cheers with gratitude and confidence, and made charming comments about some of the many signs fans had brought. (One that received many laughs: "My divorce is final. Free as a bird. Sign me!") And after "Love Me Do," he told a touching story about cutting the song with the late producer George Martin, and how he can still hear the nerves in his voice on the record.

Throughout, McCartney largely didn't need to mention last names or utter "The Beatles" — simply saying "we" or "my friend John" was enough, as it's a universal language he knew everyone there spoke. As it should be, the spirits of the members of the Beatles universe who are no longer with us are never far away during a McCartney show. Last night's version of "Here Today" — the conversation McCartney wished he had with John Lennon before the latter died — in particular was striking. McCartney performed the song solo with acoustic guitar, perched on an elevated platform so that even the upper reaches of the arena could see him. The audience was rapt and silent; it felt like McCartney was playing in a tiny, intimate club. In this song, life's fragility never felt more palpable.

And there were more reminders of fallibility. Live, McCartney's voice is more ragged on certain songs and sounded hoarse during stage banter. (As the night went on, he sounded better and stronger, however.) Vocal changes are a natural byproduct of age that have felled dozens of lesser musicians. McCartney is a notable exception, of course: Not only did he do a two-hour, twenty-minute main set with no pauses — and didn't seem to break a sweat — but he incorporated his changed vocal timbre with grace. The added wear gave "Maybe I'm Amazed," a song dedicated to Linda — again, no last name needed — a misty, sentimental edge, while the civil rights-inspired "Blackbird" felt like a sign of solidarity with what's going on in today's society. And the show-closing trio of "Golden Slumbers," "Carry That Weight" and "The End" was even more devastating because of the weathered tone. Macca's fluttering vocal edges gave the show's last lines — "And in the end/The love you take/Is equal to the love you make" — a sense of finality, but also optimism.

And let's be clear: This McCartney show was perfect and life-affirming — well-sequenced, well-paced and incredibly satisfying. (It was so good, in fact, that we made a last-minute decision to buy tickets for night two, which might have been even better.) With this year's loss of Prince and David Bowie, it feels more urgent and necessary to see music legends when they come around. As McCartney alluded to after "Here Today," telling the people you love that you care, while they're still here, is also important. That's perhaps why a McCartney concert has become such a magnet for families: There's an unspoken, intertwined thread of mortality and celebration throughout the night that served as a reminder of how precious and fleeting life really can be. Enjoying every moment of it with those who mean something to you is the most any of us can ask for or strive to achieve.