A sign of confidence: Kaine's trip to 3 conservative states is a surgical move to deepen Hillary's election edge 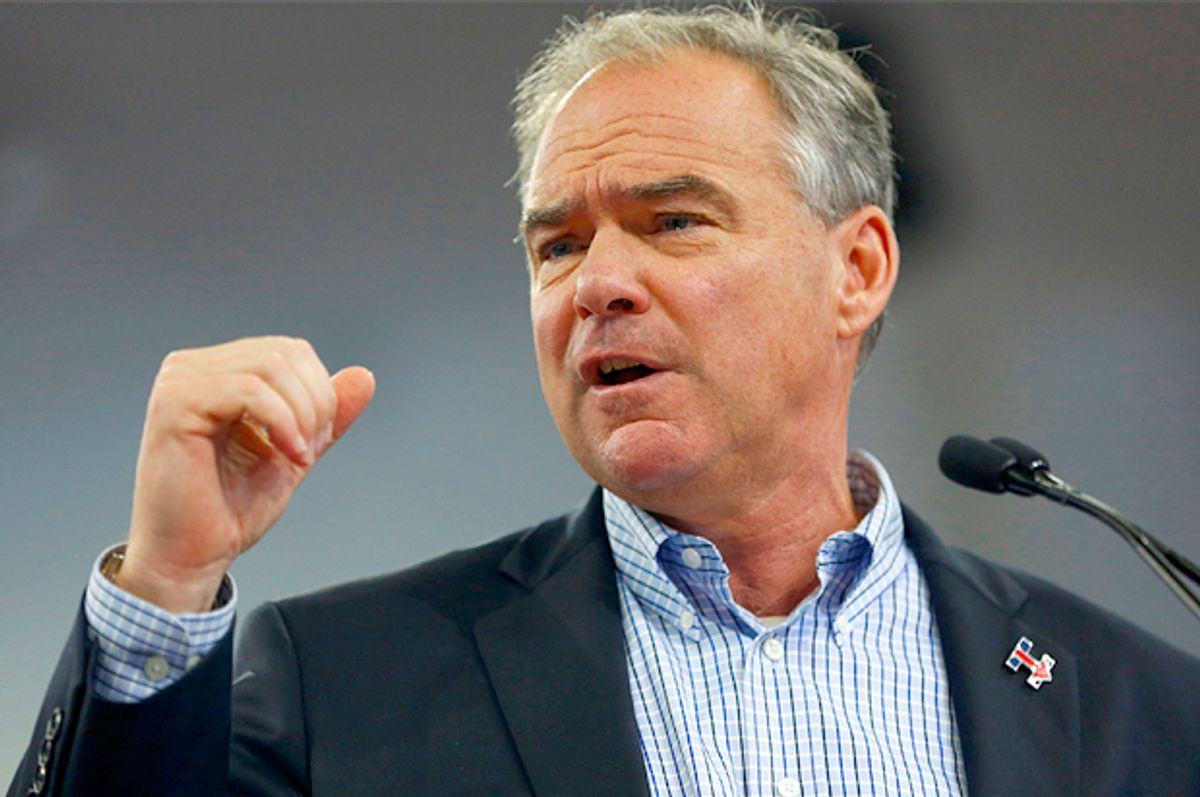 In what must be considered the political world’s version of high-level trolling, Hillary Clinton’s campaign has vice presidential candidate Tim Kaine spending time in Missouri, Wyoming and Idaho this week.

Granted, Kaine was in those states for private fundraisers, not rallies or other public events. Though there are pockets of wealthy Democratic donors in those places, Wyoming and Idaho are solidly in the Republican column for the fall, and Missouri has a ways to go before it’s competitive enough to justify major campaign efforts. Nate Silver’s FiveThirtyEight has Clinton with a 38 percent chance of winning Missouri right now, which is still too low to make it a battleground state.

Still, it’s a measure of the confidence the Clinton campaign might be feeling to have a vice presidential candidate spending time in rural conservative states like these, even if only to fundraise. Usually, at this point in an election, vice presidents are hopping through swing states, serving their traditional roles as attack dogs taking on the other party’s ticket.

In sending Kaine to red states, the Clinton campaign might be thinking about expanding the map for its presidential campaign, making Trump think about playing defense, or at least get it in his head that he has an ever-narrowing path to the presidency. The specter of an impending loss is enough to get under Trump’s paper-skin thin, causing him to lash out. Which will likely send his poll numbers down and increase Clinton’s possible victory margins. It’s a vicious cycle.

Clinton might also be thinking about the down-ballot races. Though it won’t matter in Idaho or Wyoming (which is likely sending Dick Cheney’s daughter Liz to be the sole member of its delegation to the House this fall), there is a competitive Senate race in Missouri, where Roy Blunt is vulnerable and Democrats have a real shot at grabbing his seat. Though Kaine did not appear with Blunt’s challenger, Jason Kander, on this trip, if the Democratic challenger can narrow the gap in the polls a bit (he’s hovering around seven points behind right now), that could mean a return trip by Kaine or even Clinton in the fall.

By contrast, Donald Trump’s VP candidate Mike Pence is spending time this week in Georgia and New Hampshire. The latter is considered a battleground state, albeit one that Clinton is highly favored to win. The former, though, is a traditional red state where Trump is in trouble. Silver’s FiveThirtyEight has it as a toss-up at this moment, though expects it to swing GOP as we get deeper into the fall. Still, Pence having to spend time there campaigning to shore it up is a bad sign.

This all assumes there even is any strategy coming from Trump Tower. For all we know, Pence and his staff are throwing darts at a wall map of the United States and going wherever they stick. That would be as solid an explanation for the Trump campaign’s actions as anything else.

It is all of a piece with how Trump has run his campaign so far – undisciplined, slipshod, unfocused, pick your adjective. For example, the mogul had strategists shaking their heads last week when he held a rally in Connecticut, which is a reliably blue state. That’s the sort of move that a frontrunner can afford to spend time on, but not a guy who is getting crushed in all the swing states. Trump has for some reason made winning Connecticut a goal, even while he’s ceding traditional Republican ground to the Democratic candidate.

There is still a very long way to go until Nov. 8. But right now the Clinton campaign has a good opportunity to turn it into a Democratic wave. Trump’s people aren’t going to be able to counter that with conspiracy theories about Hillary having brain damage. Though they are welcome to keep trying.