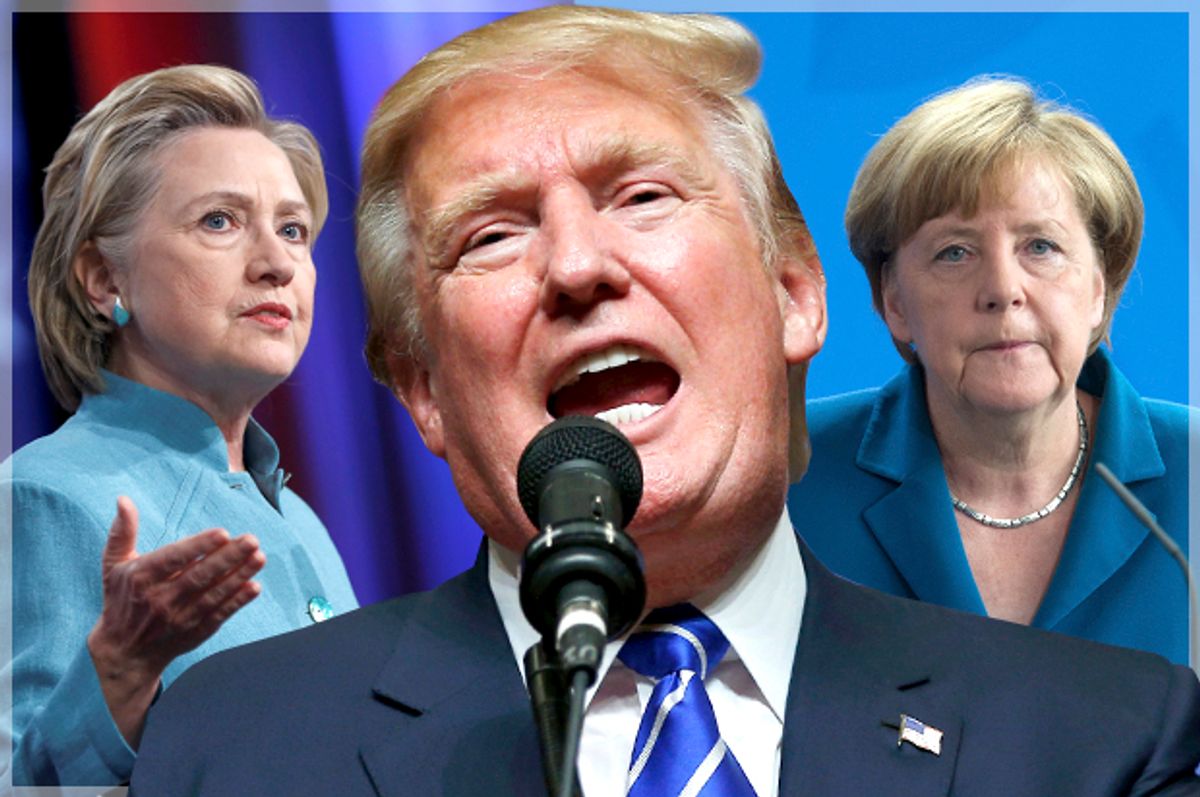 Donald Trump has a new obsession: comparing Hillary Clinton to Angela Merkel, the chancellor of Germany. During a Monday speech, Trump denounced the "massive immigration" to Germany under Merkel, for which he blames crime rising "to levels that no one thought would they would ever see." He followed up this speech with press releases and a hashtag aimed at equating Clinton and Merkel.

The choice is an odd one on its surface because most Americans don't have an opinion about Merkel, even when they know who she is. But as Alice Ollstein of Think Progress persuasively argued on Wednesday, the meme makes more sense when one considers that white supremacists definitely know who Merkel is, because they hate her:

To white nationalist communities that fervently support Trump, Merkel has been a popular villain. Sites like the Daily Stormer, the White Genocide Project, American Renaissance, and The White Resister have posted constantly about her since the Syrian refugee crisis began escalating earlier this year. They have accused her of making a “deliberate attempt to turn Germany from a majority White country into a minority White country.” They have called her a “crazy childless bitch,” an “anti-White traitor,” and "a patron saint of terrorists." They have asked, in articles about Merkel, “Why would you allow a woman to run a country, unless you were doing it as a joke?”

It's yet another example of how Trump is mainstreaming white supremacist sentiment. But by making two women the center of an attack, he is also highlighting the way that antifeminism and white supremacy are tied into each other, since people in alt-right, white supremacist circles like to blame feminism for what they see as the "decline" of the white race.

Trump alone cannot be blamed for the mainstreaming of this ideology. For years now, mainstream conservative figures have been playing footsy with the antifeminist, racist fringe, cleaning up its ideas and passing them off as mainstream conservative thought. Trump's elevation to nominee of the Republican Party is just the logical conclusion of these efforts.

In white supremacist circles, there's a lot of chatter about fears of miscegenation and the related fears that white women aren't having enough white babies. They aren't particularly subtle about it, as evidenced by this, um, "cat meme" that was posted on Facebook by a group that claims to fight "white genocide." (Besides being repugnant human beings, white supremacists also seem dim enough not to grasp that cat memes are supposed to be funny.)

Overt racism is generally looked down upon in more mainstream conservative circles, but the antifeminism of white supremacists — especially their fixation on the notion that white women aren't cranking out enough white babies — has created a pathway for their ideas to become more acceptable on the right.

If blatant white supremacy is not acceptable in mainstream conservative circles, opposition to feminism is completely standard on the right. By mainstreaming this "white genocide" hysteria in terms that focus less on immigration and more on attacking "Western" women for having too much ambition and too few children, these arguments have made their way into respectable conservative circles.

"A new genre of declinist literature, ranging from anxious to apocalyptic, has appeared to warn of the coming population implosion and the loss of Europe to more fertile, faithful Muslims," Michelle Goldberg wrote in her 2010 book "The Means of Reproduction: Sex, Power, and the Future of the World." She cites Mark Steyn's "America Alone" and Pat Buchanan's "The Death of the West" as books that raise the alarm about "Westerners" and their supposedly low birth rates. Both books focus heavily on blaming women for this purported decline.

Here's an excerpt from Goldberg's book: Because of the antifeminist angle, this argument has really taken root in antichoice circles, as well.

Steven W. Mosher and Anne Roback Morse, two of the biggest names in the "demographic winter" movement, riffed off these racist fears in a 2013 piece for LifeSiteNews, where they warned that "the French, German, Italians and British will virtually cease to exist. Arrivederci, Roma!"

The embrace of these ideas by antichoice activists, who are far more mainstream within conservative politics than are overt racists, created an avenue for these ideas to enter prevailing Republican thought. Mitt Romney, a supposedly moderate conservative, was sounding a similar alarm during his concession speech in the 2008 Republican primary campaign.

"Europe is facing a demographic disaster," Romney warned. "That's the inevitable product of weakened faith in the Creator, failed families, disrespect for the sanctity of human life and eroded morality."

He went on to suggest that if the United States doesn't "change course," which seems to mean pressuring or perhaps compelling American women to have more babies, "Asia or China will pass us by as the economic superpower."

Since then some conservatives, such as Ross Douthat of The New York Times, have tried to salvage this "demographic winter" argument from its racist roots by arguing that all women, not just white women, are failing in their duty to have more babies. But the rise of Trump has put racist and anti-immigration hysteria front and center in Republican politics, eclipsing any efforts to forward a deracialized antifeminism.

It's impossible to know what Trump is thinking, but the campaign's clear cooperation in putting out this message through press releases and tweets suggests this "Clinton=Merkel" narrative is very intentional. As ambitious women who haven't had many children — Merkel has none and Clinton only has one — they make easy villains for those who fret about "white genocide" or "demographic winter."

Trump is as usual playing with fire here. But the wider conservative movement shares the blame. For years now, mainstream conservatives, including Romney, have been elevating this theory that feminism is undermining the republic by discouraging breeding.

Efforts to clean up that argument and make it seem less racist aren't ever going to work. When someone tells a specific demographic group that its kind of women need to be having more babies, listeners will inevitably wonder, "More babies than who?"