Are you ready to join the paint party? How a bar-based crafts event became a very big business 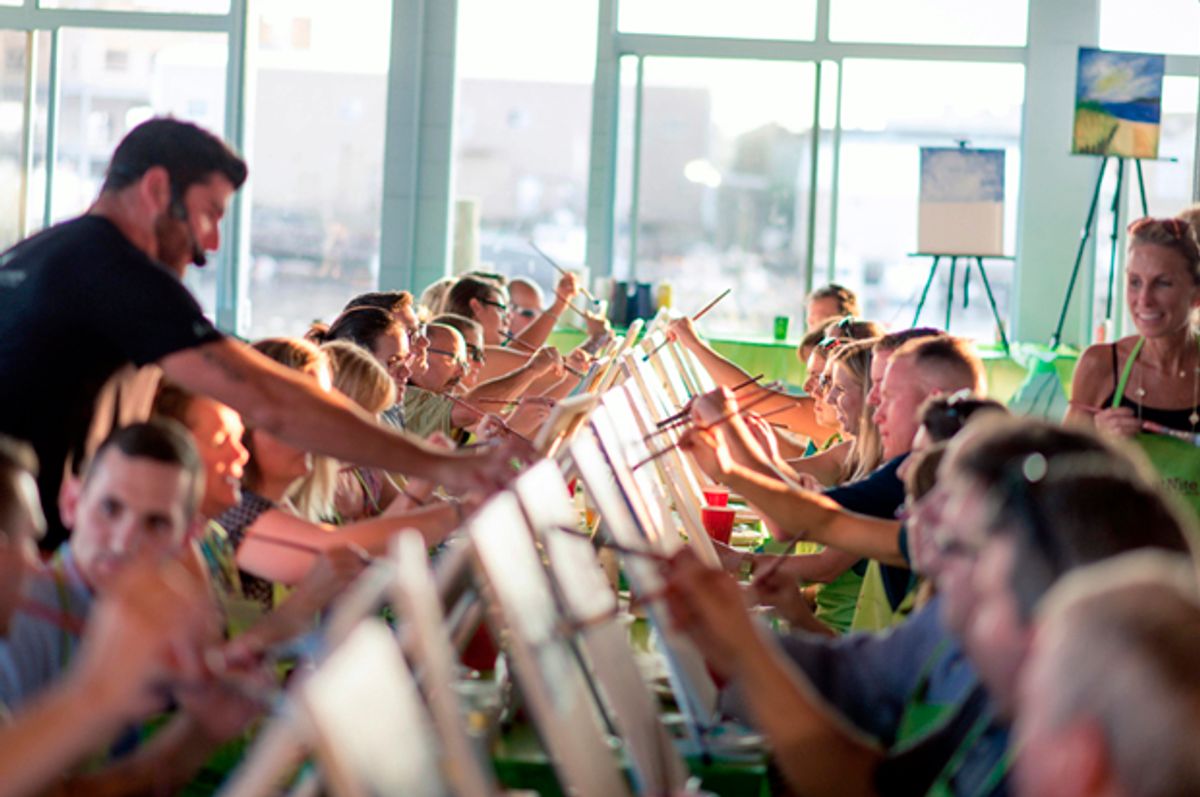 A half dozen or so years ago, Sean McGrail attended a birthday party with his pal Dan Hermann where a group of adults were enjoying a group painting exercise. At first the two Boston-area friends were surprised that the participants were eagerly sharing each other’s artwork via social media. And that’s when it hit them: This was viral marketing 101. If you give people a fun, shareable activity, they will become advocates for it, spreading the word (and in this case image) by way of their Facebook, Instagram and Tumblr accounts.

If only there was a way to make money on that, right?

Hermann and McGrail figured out one way to do it, and in 2012 they founded Paint Nite, a painting party business that has grown into a company that earned $55 million in 2015. From its Boston-area headquarters, Paint Nite manages more than 100 employees and has hosted events in 1,600 cities, most but not all of them in the U.S. — not bad for a startup seeded with just $6,800, earning it the No. 2 spot on Inc. magazine’s annual list of the fastest-growing private companies in America.

Paint Nite’s popularity corresponds with a rise of the so-called maker movement, where American embrace their inner artisans through projects like DIY cheese kits, cosplay costumes or hippie duvet covers sold on Etsy.

What makes Paint Nite a vibrant business as opposed to a humble hobby is the company's acumen. They hire local artists and supply the materials for them to host painting-and-drinking parties at local bars and restaurants. Tickets go for $45, with revenue shared by the local artists and the company. The venues benefit by hosting events that attract happy, preoccupied drinking crowds on otherwise slow nights. Paint Nite has become a big hit among women, who make up most of its clientele.

Recently the company expanded its offer to include Plant Nite, where instead of painting, the partygoers build small terrariums.

Salon spoke to McGrail, Paint Nite's president and co-founder, about his brushstroke of genius.

What was the moment when you realized, “hey, there’s a business to be had offering bars activities for their customers beyond Tuesday trivia nights”?

Dan and I attended that birthday party where friends were drinking and painting and it had a very silly, childlike joy to the event that intrigued us. We wanted to avoid the overhead associated with leasing, designing and constructing a storefront studio, so we thought adopting the trivia-in-a-bar model would be a low-cost way to get started, particularly in high-rent districts in major cities. But the day we knew we had a "real business" was when we had a room of 50 people who were complete strangers and who were all there to paint with us in a bar. It's one thing to convince family and friends to buy your product; it's another when strangers see value in it.

What does Paint Nite offer that a bar or restaurant can’t do on its own?

Most bars and restaurants are focused on producing great food and drink and managing a staff that provides great service to patrons. Promotional events would be a distraction for them to market, staff and provide supplies for. Events are a headache that's not in their wheelhouse of day-to-day business. It's smarter for them to outsource that headache and promotion to Paint Nite.

So are your customers exclusively bar and restaurant owners, or can individuals come to you for help in arranging a venue?

Even though a majority of our public events take place at restaurants, we also work with multiple venue partners for special private events that take place in sports stadiums like Fenway Park and on the smaller size, in private homes. In short, we'll work anywhere alcohol is served!

You also have Plant Nite. Instead of painting, people come together built their own mini tabletop gardens. Clearly the idea here is you give people a good time out and something to bring home to remember it.

Yes, we see ourselves as providing creative entertainment where people are engaged participants and they go home with a memento of a fun evening with friends.

It’s kind of  mind-boggling to me that in four years you’ve grown this into a business with $55 million in annual revenue. How did you grow so fast?

There's a large portion of the population that is "craft curious." They don't want to commit to a college-level art class, and they don't want to schlep around town shopping for art supplies they might only use once. Add cocktails and music to the mix, and they know that it’s a judgment-free zone where fun takes priority over the art, and it becomes accessible to a much larger audience than a typical art class.