Losing “The Nightly Show” matters: Larry Wilmore’s satire was crucial for our democracy

"The Nightly Show" had a major impact, and leaves a big hole -- whatever Comedy Central or Malcolm Gladwell think 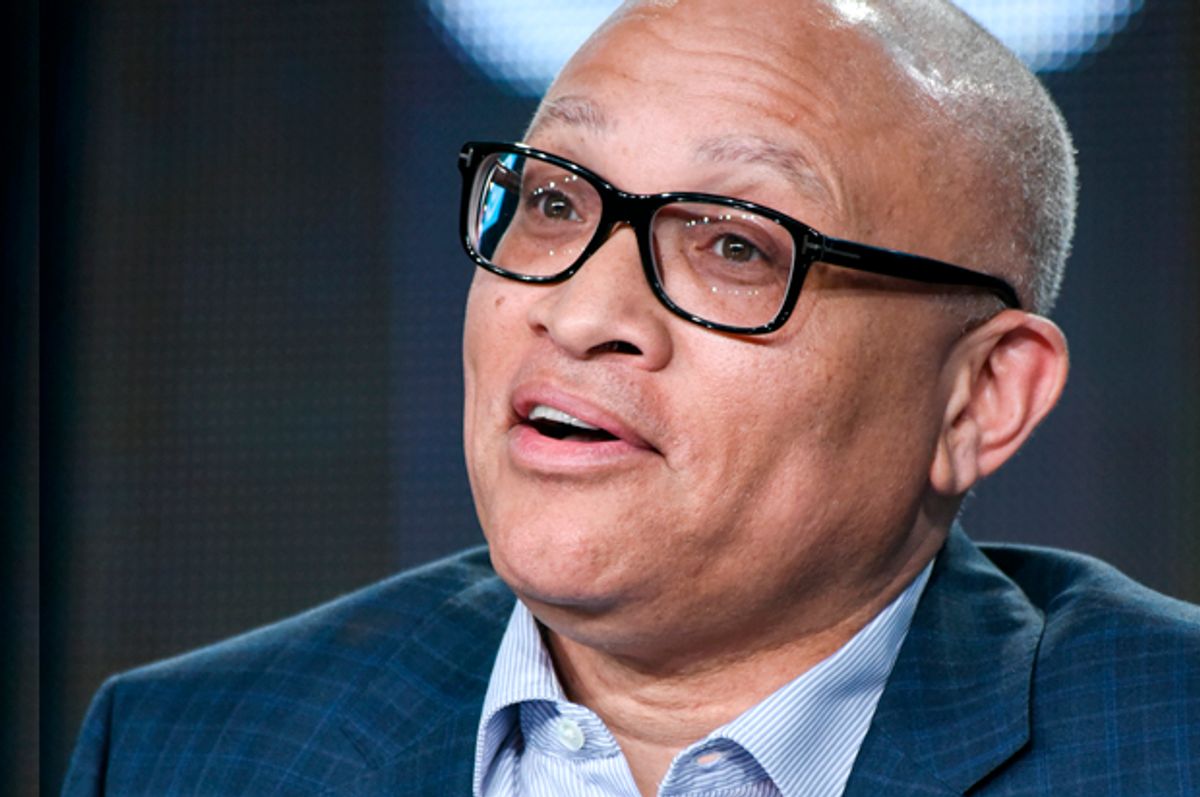 This week saw the end of one of the most significant satire news shows in our nation’s history. But if you listened to what Comedy Central said about it, you’d think the show was anything but significant. According to network president Kent Alterman, the decision to cancel “The Nightly Show,” hosted by Larry Wilmore, was made because the show failed to attract young adults and had not thrived on social media: “We hold Larry in the highest esteem, personally and professionally. He brought a strong voice and point of view to the late-night landscape,” Alterman told Variety. “Unfortunately it hasn’t resonated with our audience.”

It's no surprise that Comedy Central would focus on ratings and shares, since they generate ad revenue. But there is debate over whether “The Nightly Show’s” lower ratings were due to the lower ratings of “The Daily Show” after Trevor Noah took over as host, replacing Jon Stewart. Some feel that “The Nightly Show” simply wasn’t given the time and support needed to develop a wider base of viewers.

While all that is important, it really isn’t the point. When Alterman spoke of the show not “resonating” he revealed his own myopic sense of what it means for a comedy show to have impact. Alterman had the privilege of supporting a show that was making history. While I am sure that Wilmore himself would have been the first to welcome higher ratings, the impact of satire shows cannot be measured solely in total viewers.

Alterman didn’t have any discussion with Wilmore about other options before deciding to cancel, which suggests that Comedy Central simply didn’t realize what it was losing by ending the show. When we consider that Comedy Central has been “central” in launching some of the most significant comedy shows on television — “The Daily Show with Jon Stewart,” “South Park,” “The Colbert Report” and “Chappelle’s Show,” to name a few — it’s worth wondering if the channel is no longer in the business of developing comedy that both attracts viewers and shapes the genre.

As Geoffrey Baym explains in "From Cronkite to Colbert," one of the keys to satire news shows is the creation of an active audience — one that does not passively swallow the information presented. This means that a show might have smaller total numbers, but can develop deeper connections with the audience. Rather than tune in and giggle at a stupid frat boy joke, viewers of satire are offered real opportunities to engage with what they see.

And as this article in Smithsonian explains, satire’s use of sarcasm helps sharpen the mind. Recent studies show that processing sarcasm requires active engagement of “many parts of the brain.” That is why satirical comedy is fundamentally different from comedy that just encourages us to laugh at others and also ourselves.

In an election cycle dominated by racial aggression, the mainstreaming of misogyny, and the denial of structural inequality, Wilmore and his team offered their audience one of the few spaces where these issues could be debated rationally and intelligently. But even more important, those debates took place in the context of satire — so they were funny, smart and engaging at a time when our country needed that most.

“The Nightly Show” was especially good at connecting in significant ways with its audience. Besides the #tonightly hashtag and other ways of encouraging viewer engagement, Wilmore’s show used a number of comedic devices to ensure that viewers had to think through issues. One example was the recurring segment “Pardon the Integration” that had Mike Yard (who is African-American) and Rory Albanese (who is white) debate controversial subjects — and then switch sides. The effect was to draw out the many ways that we code the logic of arguments to identities. Covering touchy issues like reparations, the segment did an excellent job of helping viewers refine their critical thinking on the subject.

Think about it: Where on television can a viewer get a smart and reasoned debate about the merits and risks of the “Black Lives Matter” movement? Not on any of the corporate news channels. It has been the satire news shows that have increasingly filled the news media's traditional role — covering issues central to public discourse in ways that are smart, meaningful, productive and, yes, funny.

Wilmore’s show was accompanied by John Oliver’s “Last Week Tonight,” Samantha Bee’s “Full Frontal,” and Lee Camp’s “Redacted Tonight.”  Each of these shows has its own angle on political satire — Oliver enjoying the longer form offered by ad-free HBO to take on major issues, Bee expressing her satirical rage at stupidity and refusing to apologize for her gender, and Camp going after stories of the capitalist oligarchy, political corruption and social injustice that are absent in the corporate news media.

Of course, we shouldn’t forget “The Daily Show with Trevor Noah,” but since Noah himself has said that his goal is not to do political satire — at least not on a regular basis – his show does not belong to the same genre as Wilmore’s. Within the array of political satire news shows, Wilmore was the only comedian to have a show that aired four nights a week — and he had the one show that put issues of diversity, bias and discrimination at its center.

It wasn’t just that the show was hosted by an African-American and had a diverse staff; it was the sort of comedy that the team offered that mattered. One of the core ideas of the show was to “Keep it 100,” meaning that writers and producers were willing to reassess their own ideas and biases. Given that the show regularly delved into sensitive topics, “keeping it 100” was a bold move. It was that impulse that led Wilmore to discuss his controversial use of the “N” word when he roasted President Obama at the White House Correspondent’s Association Dinner earlier this year.

While Wilmore had plenty of African-American predecessors who used satire to expose injustice, bigotry and stupidity, there had never been a show that unapologetically satirized the news of the day centering on issues of race and diversity. This was not identity-based comedy, where the comedian channels habits of one group to point out its follies. This was a political comedy show that covered issues from underrepresented viewpoints. It took the mainstream news and offered a “minority report” on it.

Wilmore’s intended audience was not just viewers from his own identity group — he aimed to reach any and all viewers tired of structural injustice, microaggressions and stories that blame the victim. This was a show about current issues that refused to accept the dominant narrative, and it came to us in the middle of an election cycle where many segments of our society feel totally disenfranchised, if not outright persecuted.

Wilmore was clearly conscious of this creative move. As he signed off on his last episode, he referred to the fact that the map on his set was “upside down." He explained that the whole premise of the show was to question the version of the world we’ve been fed:

As a culture, we’ve all agreed with the opinion that the world should be seen in a certain way. So at "The Nightly Show," our chief mission was to disagree with that premise, and to see the world in a way that may not make everybody comfortable. And to present it with a cast of people who don’t always get to have a voice on that. On that front, I feel we’ve been very successful, and I couldn’t be prouder of what we accomplished.

And yet, despite the fact that Wilmore and his team offered our nation a historic first in satirical comedy, not everyone recognizes their accomplishments.

In an uncanny coincidence, Wilmore’s show wasn’t just cut at the same time that we needed his humor as a foil for the hate-mongering of Donald Trump, it also came in the same week that Malcolm Gladwell released his latest podcast in the "Revisionist History" series: The Satire Paradox. As if anticipating Wilmore’s claim of success, Gladwell argues that satire really can’t have any positive impact.

Analyzing the satire of Stephen Colbert when he's in character, Gladwell suggests that politically motivated comedy can be read by opposing viewpoints in radically different ways. For Gladwell, if there can be more than one interpretation of satire, it fails. He then describes Tina Fey’s impersonation of Sarah Palin as “toothless” and goes on to say that “her comic genius is actually a problem” since she's so funny that she distracts the audience. It isn’t just that the ironic mode of satire can lead to misreadings that bothers Gladwell; it is also that it is funny. So funny, in fact, that it can drive the audience away from serious issues.

That there is ample research suggesting that Gladwell is entirely wrong on this doesn’t sway his opinion at all. Gladwell would simply prefer straight debates about politics — without irony and certainly without laughter.

Well, Gladwell is just as wrong as Alterman, the Comedy Central head. Alterman is wrong to think that the number of viewers translates directly into resonance. Gladwell is wrong to think that political insight is diluted when it is merged with satirical irony. Their notions of the power of political comedy are impoverished and unimaginative and out of touch with research on the subject. They just don’t get it.

The show’s creator and co-producer, Jon Stewart, does get it. His parting words to Wilmore on the last show highlighted its significance and its potential enduring effects:

Wilmore’s show resonated. It made a difference. Luckily for us, the show might have ended, but the conversation isn’t over.