Reading Amy Schumer: The powerful missed message in "The Girl With the Lower Back Tattoo" 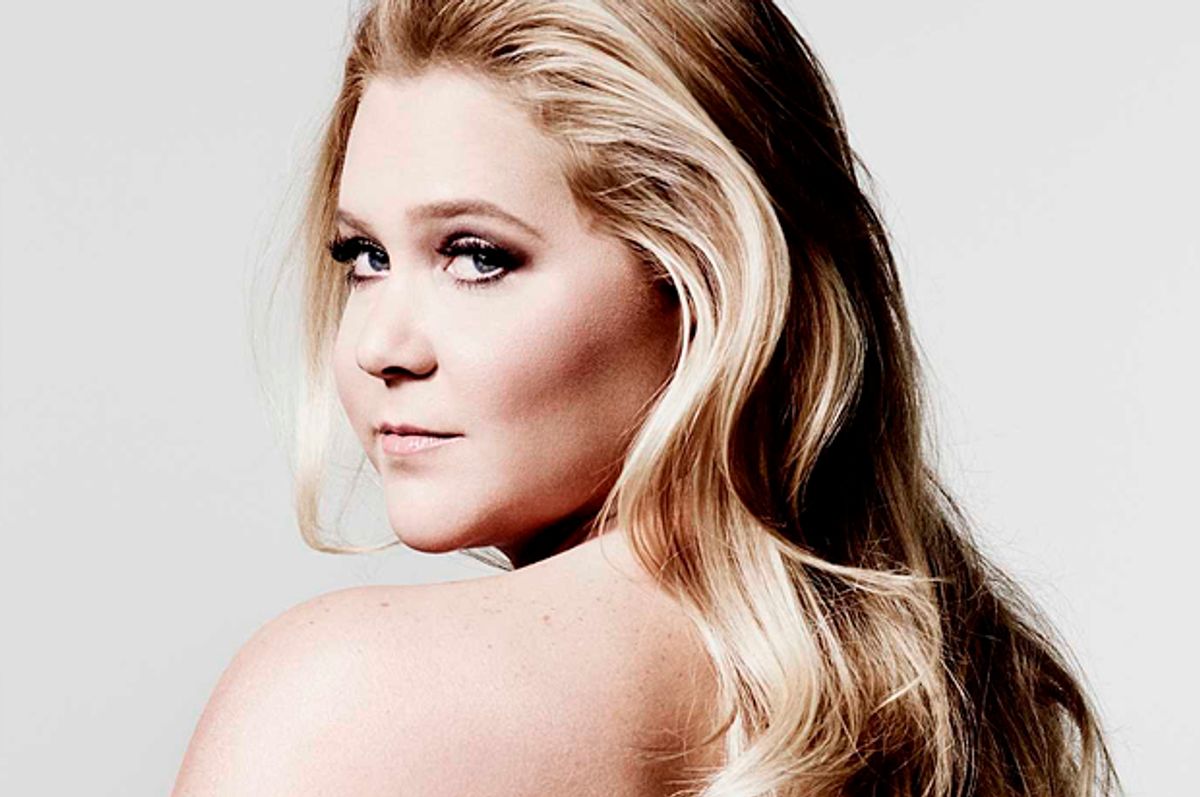 Amy Schumer isn’t who you think she is. And perhaps she isn’t who she thinks she is, either. The comedian’s debut book, "The Girl with the Lower Back Tattoo," published this week by Gallery Books, is being widely received as autobiography, memoir, confession. But it’s not really any of these things.

While Amy Schumer is ostensibly telling us the truth about her life, she’s also telling us a story. And once life becomes a story, it is no longer real life but art. Schumer is a comedian, an oral storyteller bent on making people laugh. And so her life is transmuted into words on the page, into a collection of episodic stories for all of us on dating and sex and self-love and empowerment in the workplace.

Schumer is adamant that her book is not autobiography or memoir, and that it “has NO SELF-HELP INFO OR ADVICE FOR YOU,” she begins the book in the prefatory “A Note to My Readers.” In the same “Note” she also says, “what I can help with is showing you my mistakes and my pain and my laughter.” This may seem perfunctory given the tenor of the book, yet herein lies the message: When Amy Schumer talks about herself she talks about us, too. The function of her storytelling is to illuminate the systemic, macro and micro versions of oppression that every woman deals with on a daily basis. She acts this out—both in this book and also on her award-winning Comedy Central Show, "Inside Amy Schumer"—in order to purge our shame through performing the grotesque. This collective catharsis—along with entertainment—is one of the functions of storytelling.

I’m a real woman who digests her meals and breaks out and has sweet little pockets of cellulite on her upper thighs that she’s not apologizing for. Because guess what? We all have that shit. We’re all human beings.

But "The Girl with the Lower Back Tattoo" is no confession—Schumer does not want absolution. Not even from her shitty tramp stamp tattoo, which got infected and today still looks “like a 'Mad Max' war boy’s head scar.”

So now, fifteen years later, I’m thirty-five, and any time I’m in a bathing suit people immediately know in their hearts that I’m trash. Any time I take my clothes off for the first time in front of a man and he sees it, he also knows in his heart that I’m trash and that I make poor, poor decisions . . . But I promise you from the bottom of my heart I don't care. I wear my mistakes like badges of honor, and I celebrate them.

That Schumer’s book title parodies the popular but highbrow Swedish crime novel "The Girl with the Dragon Tattoo" is not just some random literary allusion. Schumer invokes the girl who gets raped and fights back. It’s a clever elision from high art to low art, but it’s part of the book’s message. How does a girl become a victim—if not of a crime syndicate, of culture? Why do girls get tramp stamp tattoos? Why are women so at the mercy of fashion? Why do we contemplate getting French manicures when guys just want to “JAM [THEIR] WEINER IN YOUR POOPER”?

Beyond the many powerful and empowering takeaways of "The Girl with the Lower Back Tattoo"—from loving the hustle to self-love—perhaps the most overlooked is that of a woman’s right to not only make mistakes, but to make art out of them.

But not only should women not really make mistakes; they should not really be making art either. And if they do make art, they’ll be judged for it, as themselves—whoever that is. Schumer knows women who are artists are not allowed to be separate creatures from their art. As I have written elsewhere, there is a sexist double standard that prohibits women from identifying as artists, and instead minimizes and marginalizes their creativity as autobiography, autobiographical musings and diary doodles. As such, women’s creativity is sexualized, infantilized and blatantly dismissed. Our artwork is ostracized through the categorization of it as “women’s art.” Schumer, in turn, is not regarded as a comic but a “female comic,” as if the adjectival appellation both is imperative to understanding her comedy, and, more insidiously, suggests its worth. She writes in her chapter “An Exciting Time for Women in Hollywood”:

After putting in so much effort to make a good movie, it felt pretty demeaning when they called it a “female comedy.” This meaningless label painted me into a corner and forced me to speak for all females, because I am the actual FEMALE who wrote the FEMALE comedy and then starred as the lead FEMALE in that FEMALE comedy. They don’t ask Seth Rogan to be ALL MEN! They don’t make “men’s comedies.” They don’t ask Ben Stiller, “Hey, Ben, what was your message for all male-kind when you pretended to have diarrhea and chased that ferret in Along Came Polly?”

Schumer is a comedian. Male or female, “a comedian’s endgame,” I contended in an earlier piece on Schumer’s feminist brand of comedy, is “to create an art of transgression. A comedian is by definition not a spokesperson. A comedian is not a politician. A comedian has no essential social good or moral design in mind when creating and performing her art.” If anything, the aim of comedy is to transgress—to broach unsavory, contentious social issues that indirectly may lead to a kind of emotional or psychological catharsis. This indirect aim is reflected in the awkward syntax of Schumer’s noted objective of this book: “what I can help with is showing you my mistakes and my pain and my laughter.”

Schumer’s vehicle for comedy is storytelling, and through playing the role of storyteller she performs comedy through her body to reveal the comedy of all bodies, and women’s bodies in particular—pancake boobies and chicken-noodle-soup-smelling vaginas and all.

Funny, then, how people are reading this girl with a lower back tattoo as an honest conveyer of the innermost soul of Amy Schumer—whoever that is. How do we trust the “deepest confessions” of such an unreliable narrator? She has asserted the book is not an autobiography or memoir, so why would we bestow the narrator with any kind of reliability? The trickster, the cunning artist will in one breath tell you she’s “a pathological liar” and then in the next say, “Just kidding,” which is cleverly what Schumer does in the chapter aptly titled “Things You Don’t Know About Me.”

True to her comedic form, Schumer pulls a fast one while she reveals all: the key is to understand that a story is just a story. Stories, just like all forms of narrative, are interpretations of things. There is no truth, only interpretation.

What Schumer imparts to the reader is that the greatest power of the storyteller, of the comic, is that of controlling the narrative. She credits this ability as both the start of her career as a comedian and as the origin of her womanhood in her chapter about her bat mitzvah. During her chant of the Torah portion, her voice cracked. But instead of cracking from the audible chuckles in the audience, she laughed. “I laughed hard,” she recalls. “I was laughing at myself. We were all laughing together—a real laugh that went on for a while. I’m pretty sure that’s why I officially became a woman that day. Not because of the dumb ancient ceremony where children are gifted bonds they can’t cash until they’re twenty-five. . . No, I became a woman because I turned a solemn, quiet room into a place filled with unexpected laughter. I became a woman because I did, for the first time, what I was supposed to be doing for the rest of my life.” For the comedian, controlling the narrative is as often measured in language as it is in laughs.

The book’s comedic moments are balanced by more serious chapters, like the story of how her “first time” equalled being sexually assaulted by her boyfriend who “just helped himself to [her] virginity”: “Many girls remain silent about their experiences. And that is their choice. I’m opening up about my ‘first time’ because I don’t want it to happen to your daughter or sister or friend someday. I want to use my voice to tell people to make sure they have consent before they have sex with someone.”

I’m telling this story because I’m a strong-ass woman, not someone most people picture when they think “abused woman.” But it can happen to anyone. When you’re in love with a man who hurts you, it’s a special kind of hell, yet one that so many women have experienced. You’re not alone if it’s happening to you, and you’re not exempt if it hasn’t happened to you yet. I found my way out and will never be back there again. I got out. Get out.

The message Schumer offers us is fairly commonplace after 40 years of feminism and over a decade of identity politics, in spite of the fact that it still needs to be said:

Love yourself! . . . Your power comes from who you are and what you do! . . . I know my worth. I embrace my power. I say if I’m beautiful. I say if I’m strong. You will not determine my story. I will. I will speak and share and fuck and love, and I will never apologize for it. I am amazing for you, not because of you. I am not who I sleep with. I am not my weight. I am not my mother. I am myself. And I am all of you.

It’s commonplace, that is, except for the last two lines, which juxtaposes “I am myself” with “And I am all of you.” A sly nod to Sandra Bernhard’s “Without you I’m nothing,” “I am all of you” says that she is what we make her to be: “female comic,” “feminist icon,” or “girl with the lower back tattoo.” The point is that Schumer unapologetically occupies space—on the page, on the stage and in the world—and in doing so creates space for all women. Space for women to create art. Space for them to just be.