The straight-washing of “Ben-Hur”: Remake of the '59 epic drops gay subtext — and beefs up religious themes 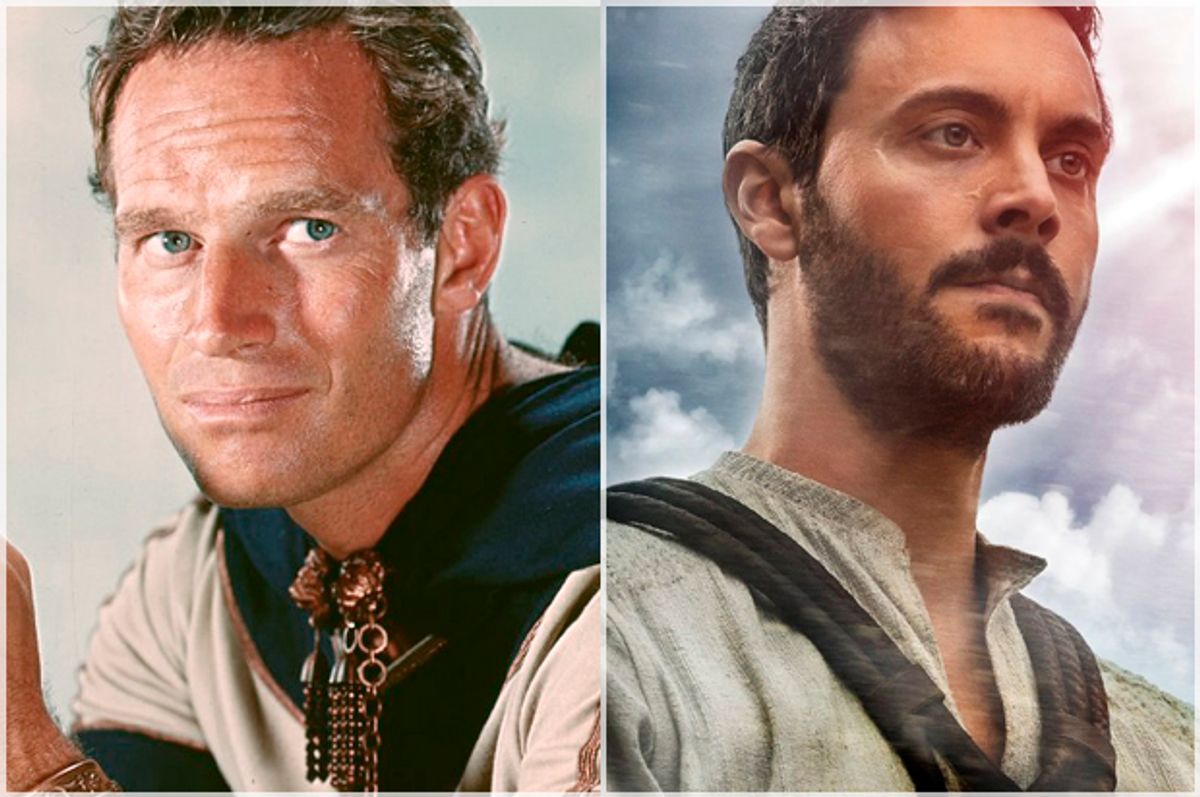 Judah Ben-Hur’s sexuality has been hotly debated for decades, but a new film is pushing him firmly back into the closet. A new remake of the 1959 William Wyler-directed swords-and-sandals epic “Ben-Hur,” which starred Charlton Heston in the title role of a nobleman turned slave who defeats an empire, is playing down the character’s subtextual homosexuality. Toby Kebbell (“Fantastic Four”), who takes over for Stephen Boyd as Messala, told press at the film’s premiere that such themes were no longer necessary to unpack.

“In 1959, the gay context was very important,” he said. “They need a voice. You shouldn’t have to hide in the dark about something you feel and you’ve grown with. That was their own thing they wanted to portray and we didn’t need to.”

The new version, from director Timur Bekmambetov (“Abraham Lincoln: Vampire Hunter”), plays up the religious themes of the film. Whereas Jesus of Nazareth was a minor character in the 1959 edition, he’s a major figure in the remake. Played by Rodrigo Santoro (“Lost”), he inspires an uprising among the “zealots” of Jerusalem — those who dare to follow him and question Roman rule. One of his followers attempts to assassinate Pontius Pilate (Pilou Asbæk), the prefect who presided over Judaea. Rather than implicate the man responsible, Ben-Hur takes the fall — forcing his enslavement and his family’s imprisonment. Messala, who has since left home to join Caesar’s army, gives up his longtime companion.

That’s a stark contrast from the 1959 version of the story, in which the culprit was a shoddy roof — an accident, sure, but hardly anything to break up a family over. To explain why Messala would betray his best friend (upgraded to an adoptive brother in the 2016 version), the filmmakers had to get creative. That’s where things get really interesting.

Gore Vidal, who was contracted by MGM and producer Sam Zimbalist to do a touch-up of Karl Tunberg’s screenplay, had believed that the only way to explain the animosity between the two men is if it were the result of a lover’s quarrel. In Vidal’s version, Messala comes home from war attempting to reignite a romance with Ben-Hur, but his friend is no longer interested. “I told Wyler, ‘This is what’s going on underneath the scene — they seem to be talking about politics, but Messala is really trying to rekindle a love affair,’” Vidal said.

Vidal outed Ben-Hur in Vito Russo’s “The Celluloid Closet,” a documentary in which he alleged that Boyd was supportive of the change but Wyler urged him not to tell Heston, famous for his conservative politics. “Don’t say anything to Chuck because he will fall apart,” Vidal recalled the director as saying. (When asked to verify the claim, Wyler offered a polite nonanswer.)

Unsurprisingly, Heston violently denounced Vidal’s account as hogwash in a furious 1996 letter to the L.A. Times. “Vidal’s claim that he slipped in a scene implying a homosexual relationship between the two men insults Willy Wyler and, I have to say, irritates the hell out of me,” Heston wrote. He added that Vidal, who he alleged had been on set for only three days as a “trial run,” made minor contributions to the film and none of his ideas were retained for the finished version of the script. Christopher Fry, one of the film’s four uncredited writers, took over the reins after Vidal’s tenure concluded.

Vidal’s version of events, though, appears to hold up to scrutiny. In a response to Heston, also published in the Times, he quoted a letter from Morgan Hudgens, a publicist for the film. Hudgens credited an affectionate scene between the two men as the writer’s handiwork, using a pejorative nickname given to Heston on set. “The big ‘cornpone,’” he wrote, “really threw himself into your ‘first meeting’ scene yesterday. You should have seen those boys embrace!”

These facts might appear to be just Hollywood gossip, but they are a crucial part of the gay canon from an era before queerness was allowed to be openly acknowledged onscreen. After all, the word “homosexuality” was not spoken on-screen until 1961, when it was uttered in the British thriller “Victim,” one of the few sympathetic portrayals of gay men from the era. Even today LGBT people are routinely straight-washed and written out of their own stories. Erasing Ben-Hur from gay cinematic history amounts to the continued erasure of our stories and lives.

William A. Wellman’s “Wings,” the first movie to win Best Picture, is a wartime romance about two men (Charles Rogers and Richard Arlen) who compete for the love of a beautiful woman, which was played by cinema’s inaugural “it girl,” Clara Bow. When David is fatally wounded during World War I, it becomes clear who was the object of Jack’s interest all along. Jack comforts his dying comrade, passionately caressing his face. “You know there is nothing in the world that means so much to me as your friendship,” he coos before the two share cinema’s first gay kiss. It’s a peck on the cheek but so perilously close to the mouth that it’s difficult to misread.

This is how gay life operated on-screen during the early years of cinema — through a coded language of suggestion and insinuation in which queer audiences became fluent. “It's amazing,” says feminist author Susie Bright in “The Celluloid Closet,” “how if you're a gay audience and you're accustomed to crumbs, how you will watch an entire movie just to see somebody wear an outfit that you think means that they're homosexual.”

Popular examples from the era include gender-bending icons like Marlene Dietrich and Greta Garbo, who both were rumored to be bisexual in their private lives. Josef von Sternberg, Dietrich’s lover and frequent collaborator, cast her in 1930’s “Morocco,” in which the German goddess plays — as she so often did — a nightclub singer. The film’s most famous scene features Dietrich in a gentleman’s tux, complete with a top hat and cigarette. To complete the subversion, she lays a big wet one on a female member of the audience during a performance.

In “Queen Christina,” Garbo played the titular role, the 16th-century ruler of Sweden. The real-life monarch’s lesbianism could only be alluded to Rouben Mamoulian’s film. When the chancellor reprimands her for being single and warns that she may die an old maid, Christina replies, “I have no intention to, chancellor. I shall die a bachelor!”

“Call Her Savage,” again featuring Clara Bow, was the first film to take audiences to a gay bar. The establishment was filled with a type commonly referred to as “sissies,” subtextually queer characters whose sexualities were neutralized through their flamboyant effeminacy. “Sissy characters in movies were always a joke,” said Quentin Crisp in “The Celluloid Closet.” “There's no sin like being a woman. When a man dresses as a woman, the audience laughs. When a woman dressed as a man, nobody laughed. They just thought she looked wonderful.”

Even if the sissy was the butt of a joke, the character was often an affectionate one, created by gay directors like George Cukor. Best known for fizzy screwball comedies like “The Women” and “The Philadelphia Story,” Cukor cast Tyrell Davis as Ernest in the 1933 social class satire “Our Betters.” Based on a play by W. Somerset Maugham, Davis played a character to which he became accustomed in the days of Hollywood before the Motion Picture Production Code, a limp-wristed dance instructor whose lips appear to be perpetually pursed. Ernest is gifted with what is perhaps the film’s most memorable line: “What an exquisite spectacle! Two ladies of title, kissing one another!”

The Motion Picture Production Code, which went into effect in 1930 and became known colloquially as the Hays Code, imposed new standards on morality during an era when Communism threatened to take over Hollywood, and these overt displays of camp became verboten. Homosexuality, referred to as “sex perversion,” was banned on screen. And if homosexual characters were included at all, they had to be punished.

In the adaptation of Tennessee Williams’ “Suddenly Last Summer,” Sebastian Venable is eaten by a pack of savage male lovers near the ruins of a temple, a clear allusion to the story of Sodom and Gomorrah. Sebastian’s behavior is considered so depraved that his face is never shown onscreen. The folks at the Production Code Administration, though, did give filmmakers the permission to depict Sebastian, if they wished.

“Since the film illustrates the horrors of such a lifestyle,” the office wrote, “it can be considered moral in theme even though it deals with sexual perversion.”

If gay characters weren’t used as vehicles to introduce a morality lesson, they were villains — as in Otto Preminger’s “Laura” and Hitchcock’s “Rope.” Both classics of the period in spite of their politics, these films portray gay men as skilled sociopaths. In “Rope,” Brandon Shaw (John Dall) and Phillip Morgan (Farley Granger) come to believe themselves “Supermen,” capable of carrying out the perfect murder. Waldo Lydecker (Clifton Webb) seeks to control Laura (Gene Tierney), the title character of Preminger’s film, and when he can’t, he tries to destroy her. (These characters were all played by gay men, which, looking back, hardly seems accidental.)

But more common, gay themes were cut out of cinema altogether, as in the film adaptations of “Cat on a Hot Tin Roof” and “The Lost Weekend.” In Charles R. Jackson's novel, the demon haunting Don Birnam is his repressed homosexuality (which the character shared with the author). But in the film, it’s merely writer’s block that plagues him. When Williams’ 1955 play made it to the big screen in 1958, Brick’s homosexuality was absent.

If the new “Ben-Hur” didn’t break that pattern, it’s allegedly unintentional. One of the screenwriters behind the recent remake, Keith R. Clarke, told Vanity Fair that the reason Ben-Hur’s sexuality got left on the cutting room floor was that the Paramount release was based directly on Lew Wallace’s 1925 novel, “Ben-Hur: A Tale of the Christ,” as Warner Bros. owns the rights to the 1959 film. Scenes like the one where Ben-Hur holds a dying Messala, key to the film’s queer subtext, were off-limits.

But if Clarke didn’t fight to stay true to the character’s sexuality, that’s just as likely a matter of funding as copyright: “Ben-Hur” was produced by Mark Burnett and Roma Downey. You likely know Burnett as the producer of “Survivor” and Downey from her role on “Touched by an Angel.” But the husband-and-wife team have also been behind the faith-based adaptations “Son of God” (in which Downey appeared as the Virgin Mary) and “The Bible” miniseries. Before its release, “Ben-Hur” was screened for religious audiences, in the hope of reaching the same evangelical market that made “Passion of the Christ” and “Heaven Is for Real” hits.

When asked about Ben-Hur’s gay beginnings, Downey argued that he had always been straight. “I don’t even know if that was true in that film,” the actress-producer said. “Here we have two brothers. They love each other. They’re raised in the same household and it’s so tragic to see their family just ripped apart.”

The real tragedy of “Ben-Hur,” though, is that it’s yet another example of gay narratives being straight-washed for popular consumption at a time when LGBT representation is worsening. Although the “X-Men” comics feature characters with a diverse range of sexual preferences, the ongoing series has yet to allow characters like Mystique — who is portrayed as bisexual in the source material — to explore same-sex relationships. Bryan Singer’s film series casts her as an exclusively heterosexual femme fatale. The filmmakers of “Dallas Buyers Club” thought that the story of Ron Woodruff, a bisexual Texan who contracted HIV in 1985, would sell better if he were a straight homophobe. Matthew McConaughey won an Oscar for the performance.

These myriad acts of silencing are what make films like “Ben-Hur” so important, as well as relevant to today’s Hollywood. It’s just a shame that nearly 60 years after the original film debuted, the closet door is still firmly locked.