The sickness appears to be spreading in camp Trump 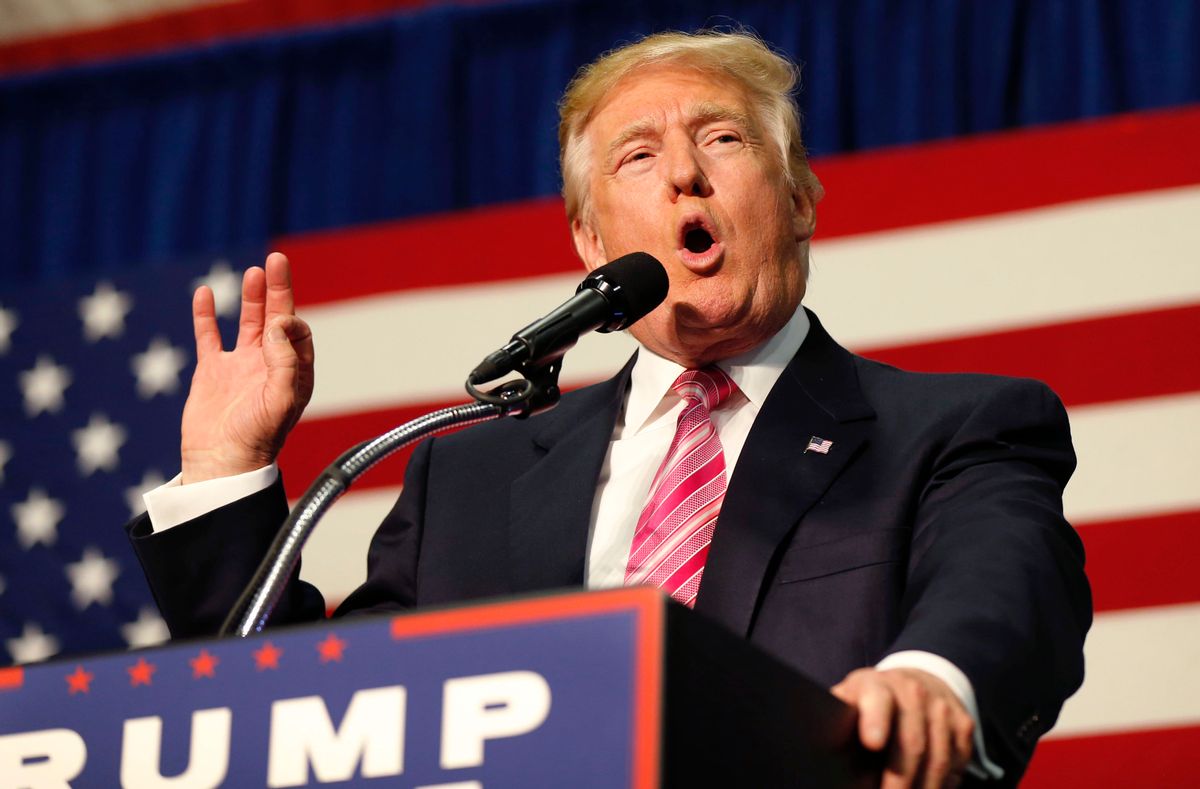 For a brief and shining moment this week, someone else’s colossally offensive behavior stole the headlines from Donald Trump. Soon Ryan Lochte will disappear back into his airhead oblivion. Although, if he plays his cards right, maybe he can parlay his moment of infamy into a job at the fabulous new Trump network after the election.

Here are some of the worst of the right-wing muck we were forced to swim through this week.

Former New York City Mayor Rudolph Giuliani said two bizarro things this week, one of which makes us concerned that he has suffered a memory-erasing brain event.

While Giuliani can be relied on to say offensive and racist things every time he is invited to comment on the latest police killing of a black man, these days he is equally prone to cult-like Trump worship. This was the case when he declared that Donald Trump’s speech on terrorism this week was, “the best speech that any Republican, at the least, has ever given.”

This bit of Trumpian-sounding hyperbole means that Trump’s largely now forgotten speech was better than the Gettysburg Address, and even better than a whole host of Saint Ronald Reagan speeches, including his “Tear Down this Wall” speech, his “Evil Empire” speech and his 1980 speech at Liberty State Park, when he said, “A recession is when your neighbor loses his job. A depression is when you lose yours. And recovery is when Jimmy Carter loses his,” which we have to admit is a pretty good line.

As unhinged as that seemed, the Giuliani statement that might signal a disruption in brain function occurred Monday, when he was introducing Trump and Mike Pence at a campaign event in Ohio.

"Under those eight years before Obama came along, we didn't have any successful radical Islamic terrorist attack in the United States," Giuliani said. "They all started when Clinton and Obama got into office."

Two little words for Giuliani. Not even words, numbers: 9 and 11. Remember, the worst terrorist attack ever on American soil that occurred in 2001, when Bush was president? The same terrorist attack you have been shamelessly milking to build your personal brand ever since? Yeah, that falls in that eight-year window.

2. Trump appeal to black voters is totally offensive in a way he will never ever understand.

As everyone knows — even Donald Trump, who tries to insulate himself against any form of knowledge — black voters are not buying his particular brand of bullshit. Only about 2 percent say they are supporting him.

On Friday night in Michigan, Trump unveiled his highly sophisticated pitch to this demographic. “Vote for me....What do you have to lose?”

Literally, that’s what he said.

"Tonight, I'm asking for the vote of every single African-American citizen in this country who wants to see a better future," Trump told a mostly white crowd in Dimondale, Mich.

"What do you have to lose by trying something new, like Trump?" he asked sounding like he was hawking his steaks or gold-plated water. "You're living in your poverty, your schools are no good, you have no jobs, 58 percent of your youth is unemployed — what the hell do you have to lose?"

So wrong on so many levels. First there is the question of whether Donald Trump has actually met any black people, whom he portrays in one broad brushstroke.

Second, black people — and everyone else, but certainly black people — have much to lose by electing a man who perpetrates the hoax that our first black president was born in Africa; counts numerous white supremacists among his supporters; thinks Mexicans are rapists and Muslims should take a loyalty test; has been sued for housing discrimination; etc, etc...

Undaunted, Trump bragged: "At the end of four years, I guarantee you that I will get over 95 percent of the African-American vote. I promise you."

Jack Kingston, a former GOP congressman from Georgia, appeared on CNN this week with Brianna Keilar to comment on Trump’s stirring attempts to reach out to black voters. This included making speeches in Wisconsin, Michigan and North Carolina and whitesplaining to black people that their lives are so bad they have nothing to lose. Keilar questioned how exactly this is outreach.

“He's in Dimondale (Michigan), which is 93 percent white,” Keilar said. And the part of Milwaukee he visited? “It's almost completely white,” she added.

To which Kingston replied, “I mean, maybe it would have been nice if he went and had a backdrop with a burning car, but the reality is..."

Kingston pointed out that Trump met with one black man, David Clarke, the iron-fisted, uber-conservative sheriff of Milwaukee County, whose department has been accused of rampant racism and stonewalling on the release of details about a police killing of a black man that set off riots. In other words, Trump’s kind of token black man. “And,” Kingston sputtered, “his rallies are open to the public. Last night in North Carolina, we saw a lot of African-Americans. I wasn't sure about the crowd content tonight…”

None of the Trumpies — with the possible exception of Trump himself — is as adept at inventing reality as our perennial favorite Katrina Pierson. While some Trumpies, like Eric Bolling and Sean Hannity, deny the existence of polls (at least when they show Trump losing), Pierson is not just off message, she’s off the range.

Here’s what happens. Pierson’s mouth moves, words come out, but these words have no correspondence to actual events. And so she found herself denying the existence of a shakeup in the Trump campaign this week, after Paul Manafort left, Breitbart’s chairman Stephen Bannon was hired and Kellyanne Conway ascended to campaign manager.

Nope, calling this a shakeup is a media invention, Pierson tried to claim as her fellow panelists listened agape. This is just business as usual, Pierson explained.

“The media and many on the right who have always been vocal against Mr. Trump have been writing this campaign’s obituary for over 400 days and it hasn’t worked yet,” Pierson expounded. “The thing is, when we are talking about campaign additions, and I know CNN is focusing on Bannon for whatever reason. He’s not in charge of communications, he’s just the CEO.”

Yeah, just the CEO of the campaign, a corporate title that usually does not exist in campaigns, but whatever. It’s not a shakeup.

When Costello and the rest didn’t seem to bite, Pierson played the deflection card, going to her favorite target in the Clinton campaign, Huma Abedin. "She’s a Muslim, you know. Also, there are all these ties to the Russian government," Pierson said.

Lips moving, check. Words coming out, check, Sense being made? Uh, no.

Later in the week, Pierson ventured further into fringe conspiracy land by advancing a medical diagnosis of Hillary Clinton. While Trump has accused Clinton of lacking stamina, because apparently he missed the 11-hour Benghazi hearings where Clinton ate Trey Gowdy and his posse for lunch, Pierson said Clinton has dysphasia. Ironically, this is a neurological disorder affecting a person’s ability to speak and understand language. Or perhaps make sense.

Katrina, this is your brain on conspiracy theories. Seriously, you should get that checked out.

The Morning Joe host has been on the outs with Trump for the past few months, exchanging withering tweets with him and withdrawing his endorsement. But maybe the bromance isn’t all together over. Scarborough not only bought Trump’s lame, blanket, scripted apology this week for saying things that “may have caused personal pain,” he said that much of what Trump has been doing on the campaign trail has been an act. “This loud, screaming, racially insensitive, at times race-baiting buffoon that gets behind microphones at political rallies, that’s Donald Trump playing a role,” Scarborough said.

His guest, adman and fellow white man Donny Deutsch added, “I’ve always found him to be charming, smart, generous of spirit if you ever called him up.”

So, maybe the Mexicans he maligns and tosses out and the Muslims he bans would just call him up?

“Having said that, this man I’ve seen up on the stump is repulsive to me,” Deutsch hastened to add.

Scarborough bought into the narrative that the feeble Trump apology represented the long-awaited and prayed-for pivot that desperate Republicans are longing to see in their nominee.

Like Bill O’Reilly, Donald’s white male pals have never heard him say anything racist behind closed doors. Selective hearing is a wonderful thing.

When people are out committing hate crimes and invoking your name, and children are chanting “Build the wall” to their tearful Latino classmates, playing a role just does not cut it, Morning Joe.