The Clinton BS files: The right wing's long history of obsession with the Clintons' sex lives 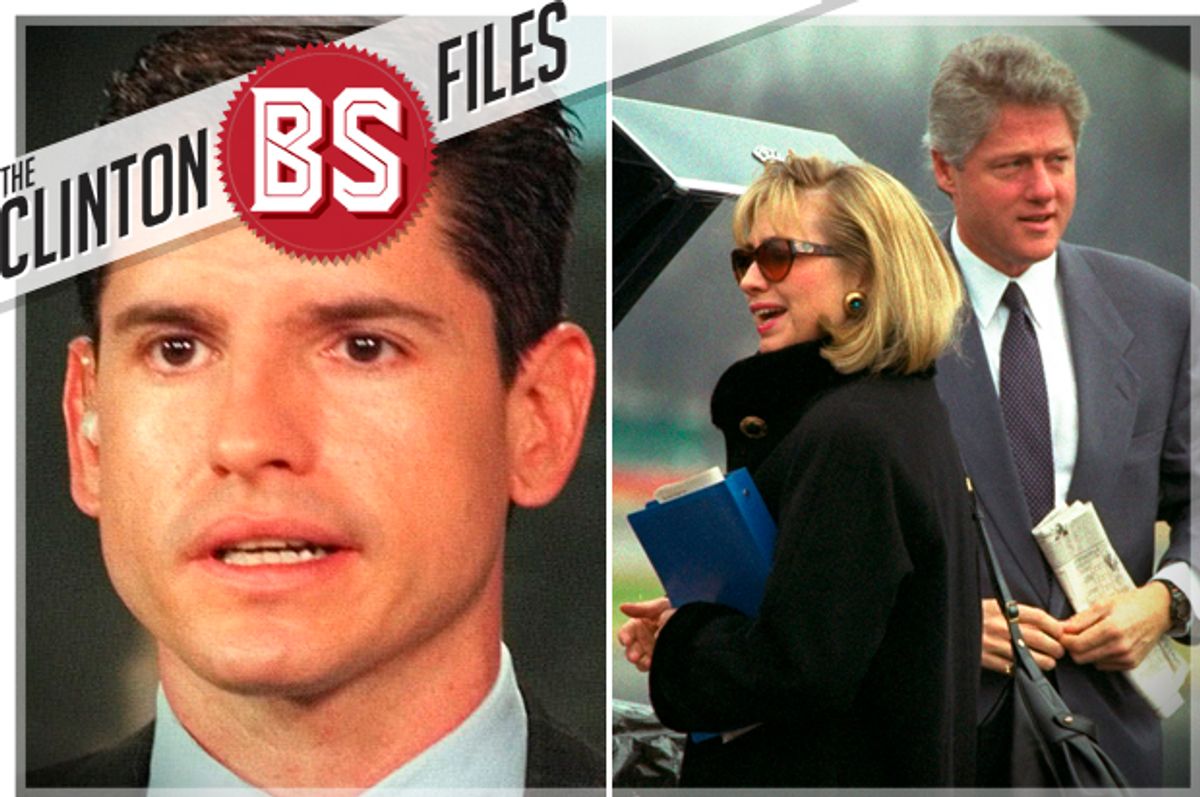 Bill and Hillary Clinton have been plagued by conspiracy theories throughout most of their life in the public eye, perhaps more than any other politicians in history. The Clinton BS Files are a weekly in-depth look at the stories behind some of these conspiracy theories. You can read last week's here.

The fact that Bill Clinton was less than faithful to his wife was no secret to the public during his first term as president. During his 1992 campaign, a woman named Gennifer Flowers offered compelling evidence that she'd had an affair of some sort with Clinton, but the public ultimately didn't seem too worried about it.

But '90s conservatives, who saw Clinton as a pot-smoking sex maniac and the symbol of everything they hated about the 1960s, became obsessed with the first baby-boomer president and what he did with his penis. In 1993, they were finally able to inject this sexual obsession into the mainstream media with one of what ended up being many, many pseudo-scandals: Troopergate.

Things kicked off late in 1993, when David Brock, who had made a name for himself previously by publishing a right-wing smear book about Anita Hill, wrote a lengthy hit piece on Bill and Hillary Clinton for the right-wing tabloid The American Spectator. Titled "His Cheatin' Heart," the piece centered on allegations from four Arkansas state troopers that they had helped Bill cheat on Hillary with "dozens of women."

Brock's article is a true masterpiece of right-wing agitprop, simultaneously leering and judgmental. It's clear Brock knows his audience, which in 1993 was mostly composed of older white conservatives eager to cluck their tongues disapprovingly at how far our nation had fallen to allow a couple of dirty hippies to hole up in the White House.

"Some may well conclude, therefore, that Bill and Hillary Clinton’s loose sexual morals and their habitual foul language are irrelevant to their public roles and, in any event, are not uncharacteristic of their generation as a whole," Brock, who was only 31 himself at the time, wrote.

The piece is 12,000 words long, and most of it is pointless pandering to stereotypes that conservatives of the '90s held about the Clintons. Bill is painted as sexually incontinent white trash. Hillary is treated as a Lady Macbeth figure who degrades all the men around her — at one point Brock says she would "order troopers to fetch feminine napkins from her bathroom and deliver them to her at the firm" — who has driven her husband from the marriage bed with her soul-sucking ambition. (Despite her supposed unattractiveness, the troopers also accused Hillary of having an affair with Clinton family friend Vince Foster.)

It's not until part six of this interminable article that Brock finally gets around to the sexy stuff, which amounts to a bunch of allegations that Clinton forced the troopers to facilitate his affairs and hide them from his wife.

Brock spent a lot of time in the piece trying to establish credibility for these claims, but it's hard for the reader to shake the sense that these tales from the troopers are not a dry recounting of the facts, and more a matter of coworkers swapping stories that grow in size with each retelling. To hear these troopers tell it, you'd think Clinton spent 25 out of 24 hours every day having sex. Their eagerness to scandalize and titillate comes through loud and clear.

But no matter. After the story was published, there was a media feeding frenzy. The Los Angeles Times contacted the troopers, who repeated their stories. Beyond just the sex, there were other allegations of impropriety, with troopers claiming they were offered jobs in exchange for their silence, which helped justify even more media coverage of this story.

The problems with the troopers' story started to crop up immediately. One of the troopers, Danny Ferguson, signed an affidavit denying the allegations that Clinton offered them jobs for silence. (Bill Clinton also denied the allegations.) Another trooper, Larry Patterson, told Brock that troopers had been offered jobs, but later said, "I would have liked to have been offered one, but I wouldn't have accepted it." He alleged instead that vague promises were made, rather than a firm quid-pro-quo offer.

"None of the trooper allegations that could be independently checked turned out to be true," Brock wrote in his 2002 book "Blinded by the Right." Brock had a change of heart in the late '90s, and eventually apologized to the Clintons.

Nowadays, Brock ranks among the biggest fans of Hillary Clinton. His website, Blue Nation Review, is full of gushing coverage of the Democratic presidential nominee, and he has spent the past few years as an avid fundraiser for Clinton's presidential efforts. More details on the insurance situation can be read in the New York Times coverage of the incident.

It's impossible to know exactly what happened here. Most people believe that Bill Clinton has had his share of indiscretions. That said, the troopers are clearly telling tall tales. How much is exaggeration and how much is truth? It's impossible to say at this point.

One allegation in the original Brock story had an especially long tail.

"One of the troopers told the story of how Clinton had eyed a woman at a reception at the Excelsior Hotel in downtown Little Rock," Brock wrote. "According to the trooper, who told the story to both Patterson and Perry as well, Clinton asked him to approach the woman, whom the trooper remembered only as Paula, tell her how attractive the governor thought she was, and take her to a room in the hotel where Clinton would be waiting. On this particular evening, after her encounter with Clinton, which lasted no more than an hour as the trooper stood by in the hall, the trooper said Paula told him she was available to be Clinton’s regular girlfriend if he so desired."

The woman in question, Paula Jones — who was then a 24-year-old using the name Paula Corbin — did not agree with this version of events. Instead, she says, the trooper took her to the hotel room, where Clinton dropped trou and asked her to "kiss it." Contrary to the trooper's claim, she says, she left in anger and did not ask to be Clinton's girlfriend.

"I was afraid that people who read the article in The American Spectator might believe that I had an affair with Mr. Clinton," Jones said later in a 1998 legal declaration. So she came forward with her version of events, eventually deciding to sue Clinton for sexual harassment. They settled out of court in November 1998.

Troopergate is the story that kick-started the overwhelming right-wing obsession with Bill Clinton's sex life, one that continues to this day. It's an obsession that's gone through many permutations, with only conservative self-titillation as a constant.

In 1993, the narrative, fueled by the troopers, was that Bill was a real Lothario who could seduce women with the wink of an eye. Hillary, on the other hand, was an embittered hag who had her jealous suspicions but was usually kept in the dark. Now the story has morphed into an even darker one, with Donald Trump accusing Bill of rape and accusing Hillary of being an "enabler," painting her as a cackling witch who enjoys hurting women from afar through her husband.

This tradition of right-wingers engaging in weird sexual fantasies and wild speculation about the Clinton marriage -- and then assuming it's all true -- all goes back to 1993, when a few bored cops told David Brock what he knew his audience wanted to hear.