"The Night Of" recap: Are we closer to discovering the truth?

Jack doubles down his efforts to get to the bottom of Andrea's murder, and Naz and Chandra share a moment 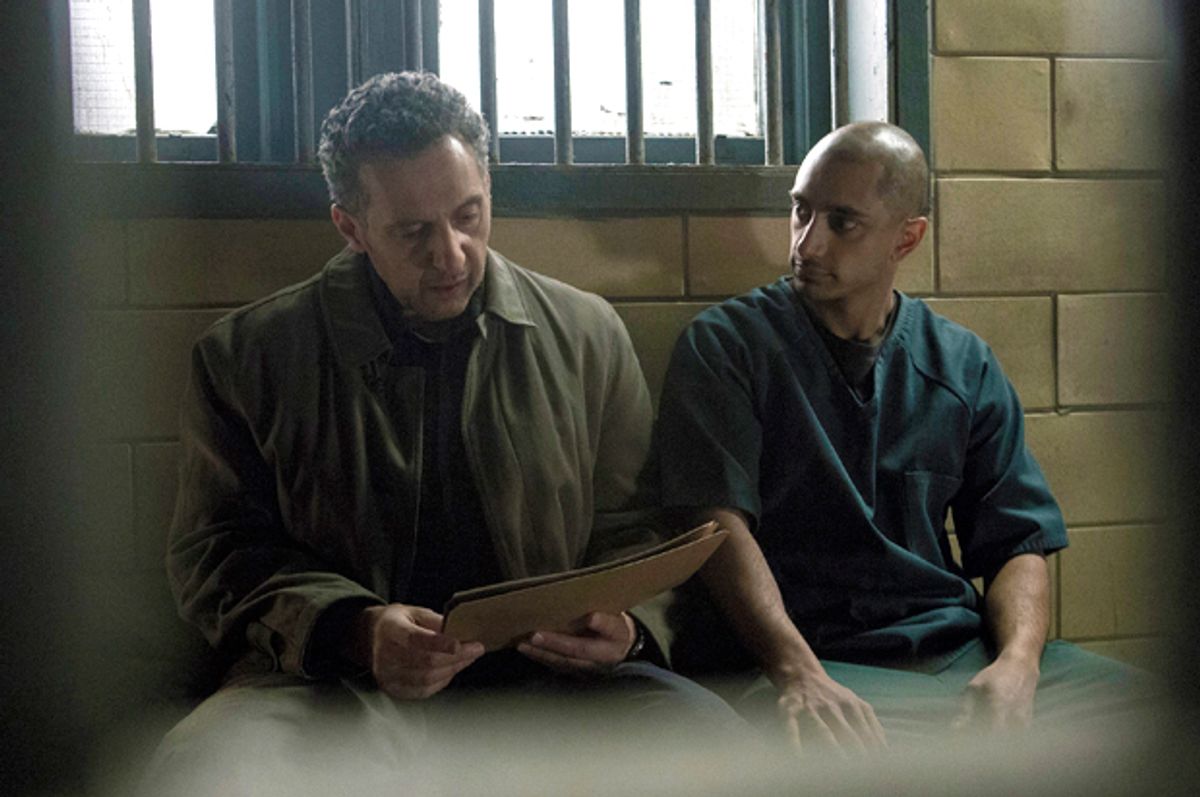 John Turturro and Riz Ahmed in "The Night Of" (HBO)
--

“The Night Of’s” penultimate episode, “An Ordinary Death,” reflects everything that has made the show so potent and unique, while indulging in some of the on-the-nose pettiness that has kept it from attaining the greatness of its predecessor in literary-minded crime drama, "The Wire." Ironically, or perhaps appropriately, enough, the series’ early strengths and latter-day weaknesses are evident in the very first scene, with the soon-to-retire Detective Box standing over the corpse of a young African-American woman who has been battered and slashed. Box’s deadpan can’t disguise his disgust at the lack of attention paid to this young woman’s death. He quips to his partner that this death looks just like Andrea Cornish’s — so where are all the cameras?

This moment does a lot of narrative and thematic work deftly: It introduces the possibility of yet another suspect (or suggests that either Duane Reade or our freakily fundamentalist hearse driver are out for blood again), adding another thin stick of reasonable doubt without collapsing the matchstick house of narrative under its weight. That one incisive line does so much to help define Box by something other than his Javert-like intensity. Maybe he’s not an automaton solely animated by a love of the law — maybe he actually gives a damn about the victims. And maybe, just maybe, even if he has his doubts, he’s still fundamentally convinced that the killer is the skittish kid with blood on his hands and a knife in his jacket.

This is far from a Box-specific episode (a girl can only dream), but it is the most sustained attention that the show has paid to the lawman since “A Subtle Beast,” and this attention — particularly around Box’s motivations for taking Naz’s inhaler from the crime scene and returning it to him — is so rewarding because it asks the viewer to flex her mental muscle. Did he give it back, as Chandra suggests in her cross-examination, because its existence implies that Naz might be too physically fragile to be the kind of brute who could stab a woman 22 times? Or is Box telling the truth to the jury, and to himself, when he says that his was a simple act of compassion? The boy had trouble breathing, and Box could help, so he did? Quite plausibly, it’s an inchoate fusion of the two — a kindness sparked by cunning.

When “The Night Of” is at its most successful, it allows questions like these to slip under its skin, beating as subtly and as powerfully as a pulse. Freddy’s protection is undoubtedly the only reason that Naz is still alive, and Freddy has made genuine efforts to help his favorite “college boy” beyond merely keeping him upright and breathing (most notably, swapping the orange uniform that would identify Naz as a violent offender with a more benign blue; initially advising him to take the plea deal; and even making sure that he has a fitted suit with a white shirt for court). Yet this streetwise kindliness is like a shark fin cutting through clear water. Under the surface, there are rows of teeth and a predator’s finger-snap instincts. Freddy has Naz swallowing satchels of drugs that are brought into the prison via the mother of another young prisoner in Freddy’s orbit; when that young prisoner kills himself, feeling broken and trapped in a coerced sexual relationship with an older, tougher man, Freddy turns Naz into an accomplice to murder.

The camera follows Naz and Freddy from a distance as they descend from Freddy’s second-story cell, as Naz walks over to the guard booth to ask for a prescription refill for the very inhaler Box returned to him; and Freddy, with an uppercut-quickness, slides a razor over the jailhouse rapist’s throat as he watches a daytime talk show. The moment is meant to shock and horrify, with the camera’s remove signifying that this Naz is no longer the dreamy boy of the pilot who tells his lover that he will not play mumblety-peg with her (until, in the end, he does), but is, ironically enough, becoming the hardened, remorseless criminal that his erstwhile attorney, Alison Crowe, warned he would be, if left to rot at Riker’s. Crowe may have been grandstanding for the camera—yet this doesn’t make her any less right.

It’s a testament to writer Richard Price’s ability to construct characters that are as betrayed by their own flaws as much as their unfortunate circumstances, and to Riz Ahmed’s formidable performance in making those flaws seem so achingly real, that Naz’s transformation feels so plausible. Naz is the one to discover his fellow prisoner’s body slumped over a toilet, bleeding from the wrists—looking as crumpled, as casually discarded as the young woman Box finds in the first scene. Ahmed forces his face into a taut mask of convict hardness, allowing, and only for a moment, a brief flash of horror—and that horror is grounded in the awareness that, without Freddy’s vigilance, he could’ve just as easily been the boy who bled out alone on a dirty bathroom floor (frankly, he still could be). These scenes are so devastating because they’re the natural end-point of a slow build; the mounting terror and confusion that has characterized Naz’s time behind bars is far more effective than the sudden eruption of epiphanies that have made the courtroom and investigation scenes so bitterly disappointing.

The most significant disappointment of “An Ordinary Death” is that kiss between Chandra and Naz; it’s ridiculous enough on its own—one would assume that a crime writer as esteemed as Price might have, somewhere in his travels, met a woman attorney, and so he might have some idea, however dim, that they value their professional competence (which—gasp!—includes not macking on their clients) just as much as the menfolk do—but it also serves no tangible purpose in the story. In the previous episode, “Samson and Delilah,” Naz’s earlier covert phone call to Chandra where he thanks her for believing in him is so heartbreaking because of its mumbled restraint; it conveys his loneliness and mounting fears that he’ll never have the chance to be in love, or at least have another sweet tumble in the sheets. And that call also opens a window into Chandra’s mind-frame after her chilling encounter with the hearse driver. She is moved by Naz’s suffering, yet there is a part of her that is still understandably hesitant, even afraid (though she clearly believes in his innocence). This kiss is just a lot of cooing and lip-smacking, signifying nothing.

Chandra’s co-counsel, Jack Stone, spends this episode seeking a different kind of action—chasing down Andrea’s stepfather, Paul Taylor, a gym-rat gigolo with a temper as hot and hard as his abs. Paul is the most obvious suspect, with a bull’s-eye trifecta of means, motive and opportunity. It’s wasteful to shoehorn an actor as vibrant as Turturro into such a stale plot-thread: Of course Jack will find an elegant, flirty upper-crust cougar who will testify to Paul’s violent side. Of course he’ll ask too many questions of too many people. And of course he’ll find himself on the wrong end of a bench press, with Paul pushing the weights down on his chest and snarling at him to back off. In just two episodes, the series has branded Paul with a scarlet “S” for suspect without bothering to develop him—even the hearse driver manages a genuinely malevolent and wholly distinct presence.

Paul is a slipshod attempt to introduce reasonable doubt, like Duane Reade and the driver—only, here, the show wants to try and build a very plausible, specific case against him. This could have been more interesting if the groundwork had been laid more clearly, earlier on. His introduction, dead-eyed and dispassionate as he collects Andrea’s remains in episode two, would’ve allowed for a more natural, more immediate pivot into the real reasons he’s unwilling to look at his poor dead stepdaughter’s body. Instead, though, we spent that time learning of the many folk cures for Jack Stone’s eczema. As it stands, this feels like the show was immersed in a deep dream about Naz’s loss of innocence and his attorney’s quest to be a champion for someone who deserves it, and then someone tossed a glass of water on its face: It’s time to wake up and rally some suspects. This is why Box’s discovery of the murdered woman works so well — it follows that dark, dream-like logic, that nightmarish escalation of dread.  There is a body, cut up just like the other body, and a killer, only this killer can’t be the one currently behind bars — so, now what? “The Night Of” has just one more episode to figure it out.