Wagatwe Wanjuki wants justice for sexual-assault survivors, but she also wants an apology 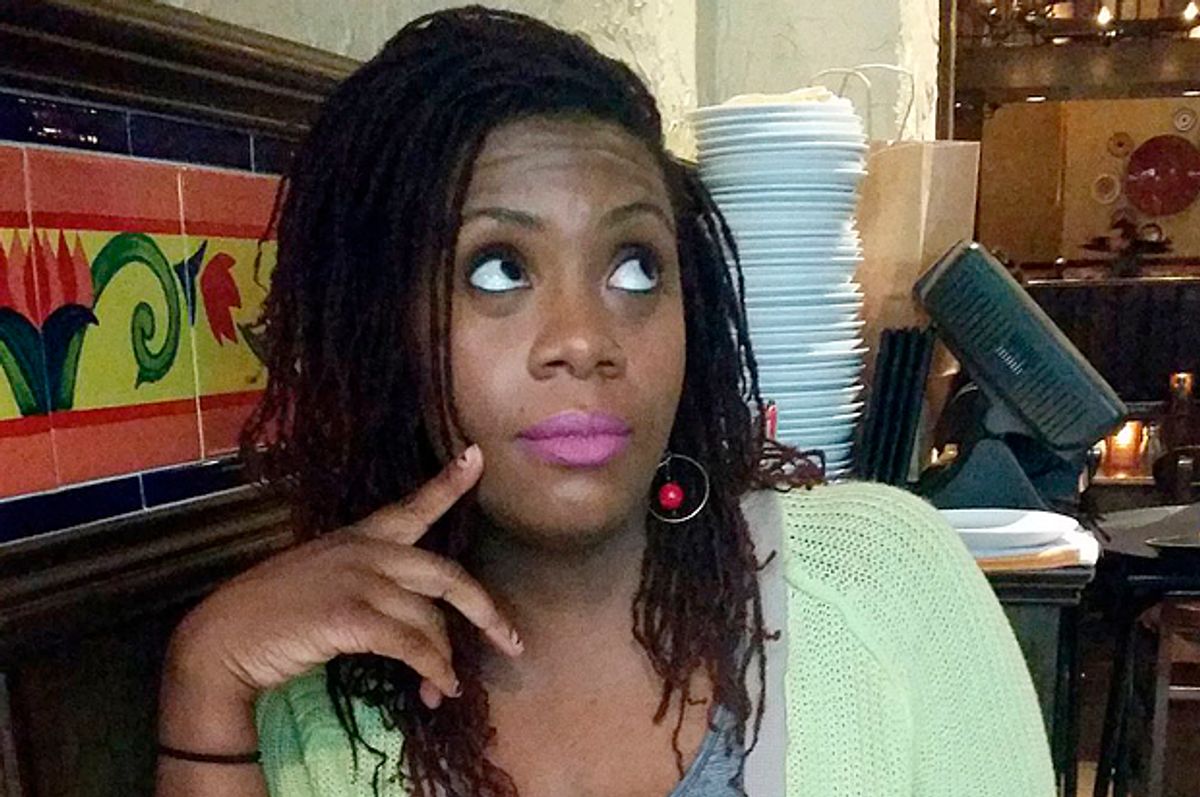 Wagatwe Wanjuki has packed a lot of activism into a few short years. The feminist and antirape activist has worked with Know Your IX, a group fighting for sexual-assault survivor rights on campus, has appeared in the documentary "The Hunting Ground" and is now the co-founder of Survivors Eradicating Rape Culture.

Wanjuki has started a new online campaign, called the Just Say Sorry campaign, to empower survivors and draw attention to university failures to address the needs of sexual-assault survivors. (The Twitter hande is #JustSaySorry.) The campaign is simple but perfectly pitched to go viral: Survivors are taking college mementos, like T-shirts and banners, posting videos online of their burning of these things. The survivors say they want their universities to apologize for mishandling their cases and will continue the burnings until then.

Below is my conversation, edited lightly for clarity, with Wanjuki about this campaign.

The Just Say Sorry Campaign is a grassroots campaign where we are hoping to inspire survivors and empower them to demand apologies from their institutions in terms of failing them and others in not being able to adequately prevent sexual violence and then also not respond to it properly.

The campaign was started by myself and Kamilah Willingham. She and I felt that burning items would be a really great way to constructively show our anger.

Very often survivors, we are policed in terms of how we are supposed to express our emotions about being victimized — not just being victimized by our assailants but also by universities when they are so apathetic and unapologetic about their failures.

Burning just felt like a really permanent statement, where it kills two birds with one stone. It also helps me get rid of these items that I have felt really complicated about for a very long time, and now they’re kind of gone and it’s great to get rid of those reminders. And also I really wanted to focus on different representations of the journey of being a survivor and being failed by an institution that you used to trust.

So how did Tufts fail you in particular?

When I look back on it, there were a lot of things I didn’t notice. But when I reported being sexually assaulted, they didn’t really have the expertise or the ability to respond properly. So when I reported it, and I initiated a complaint through the judicial process, they decided move move forward with going past [my] filing a report. So I filed this report, and then I wrote this entire statement, pages long, about the years of abuse I endured by another student, and what they do is after you hand in your statement, they give a copy to the other student so they can respond and give their version.

After they gave it to my assailant, he responded and said, “I shouldn’t have to do this. A lot of these things are outside the one-year statute of limitations,” even though I had already gotten an approval to have that waived.

They decided that actually now that he’s been asserting that, he’s right. They didn’t do anything in terms of holding my assailant accountable.

And then further on, they just did not help me or support me in any way. I was struggling academically. Then when I first started to do activism on campus to improve the sexual-assault policy and create real procedures, they decided to expel me.

And when I did appeal, and said hey, Title IX gives me the right to stay on campus and continue my education, they said they had their legal counsel look over Title IX and under that law they had no obligation to help me, and good luck with your life.

And that’s essentially what happened. They decided that it’s OK to have a rapist graduate from their institution. And a survivor who was very brave to speak up and try to make the campus safer for everyone — they decided I was not worthy of that. So that runs very deep in terms of how the course of my life has been changed.

And the school has been subjected to a federal investigation, correct?

Yes. I initiated a complaint and then another person filed a complaint soon afterwards. Thanks to the complaint of the person who filed the year after me, Tufts was found out of compliance with Title IX.

And it just reaffirmed the things that I knew in terms of not having the right policies in place or practices. The people there who were enforcing this so-called idea of safety just didn’t know what they were doing; they didn’t know anything about the dynamics of abuse or trauma or assault, and it really showed.

They’ve been called out publicly by the federal government. But the next step you want is an apology and that’s what this campaign is about. Can you speak about the importance of apologies and what they mean to you and other survivors?

This campaign for apology is a great representation of my personal journey in terms of what I believe are really effective and meaningful avenues for justice. Before I was really about saying, “This is legally wrong.” Unfortunately, myself and other survivors have become a little bit disillusioned with the process. Because of bureaucracy, investigations can take years and very often they can be found not in your favor. But that doesn’t mean that something wrong didn’t happen.

Just Say Sorry is a very basic demand. Schools love to talk about how much better they are and how they’ve made strides in addressing sexual violence and improving their programs and policies. Tufts was saying, “We are totally committed to Title IX compliance.” We want them to be able to give justice outside of the law that won’t take years and is accessible to everyone.

Apologizing is a meaningful statement. It is a public declaration saying that we acknowledge that this thing that happened to you is wrong and we’re sorry. It’s a really valuable tool for survivors because at the end of the day what survivors want is to be recognized. And they want to have the community say that what happened to them is wrong so they’re no longer carrying the shame on themselves, which is completely unfair.

When colleges apologize, they’re able to sort of say, “We realize that we let you down and we broke trust, but we want to work on that and rebuild it because we care about doing the right thing rather than just following the letter of the law because we have to.” Schools love to herald themselves as bastions of progress and equality. But allowing sexual assault to happen on their campuses and not apologizing for allowing it to continue at such high rates doesn’t fall in line with the values they supposedly hold. If they can apologize, this gives them the chance to talk the talk and say what they supposedly mean.

If someone wants to follow the campaign, where should they go?

We have a website, JustSaySorry.Today. Also check us out on Twitter and everywhere. We’re basically using the hashtag #JustSaySorry.

Other survivors have been joining in and asking for apologies from their institutions. Some survivors have also been doing their own burnings, which have been amazing. There’s a lot of information. We’re just getting started.

We love how much this resonates with people. And I think we can all agree that if schools have a documented record of failing survivors, it’s not really a hard ask for us to say, “Hey, just apologize for letting people down.” It will have an effect for the better in terms of the campus culture that we could use and normally would not expect.

You met Lady Gaga and Joe Biden at the Oscars. How did that happen?

I was interviewed for “The Hunting Ground” and I was briefly in their documentary. One of the songs on the soundtrack was nominated for an Oscar, and they wanted to have Lady Gaga, who sings the song, be onstage with other survivors.

So I got a random email one day and it said, “This is totally confidential, but we want survivors to join Lady Gaga onstage. Do you want to come?”

At first I kind of hemmed and hawed, but I decided to go because it is a once-in-a-lifetime opportunity, and fortunately Lady Gaga is really awesome and spent time with us.

Joe Biden has been doing a lot of work in supporting and talking to survivors, so he stayed after the ceremony to talk to each and every one of us. It was really amazing to have that opportunity.

What do you recommend that people reading this can do to help survivors get justice?

The biggest thing to help survivors get justice is to ask them. Ask survivors what they want and what they need. Very often just believing them and their stories and apologizing and recognizing their pain can go a really long way. I think once we all hold these values of believing survivors and supporting them, the laws and policies that we do have in place will be more impactful and actually be solid to the letter of the law, in the sense that assailants will be held accountable and we all will have safer communities.