Enough with the world tour: Bring the Summer Olympics back home to Greece

The IOC should create a permanent home for the Summer Olympics in Greece, which could ease the nation's debt 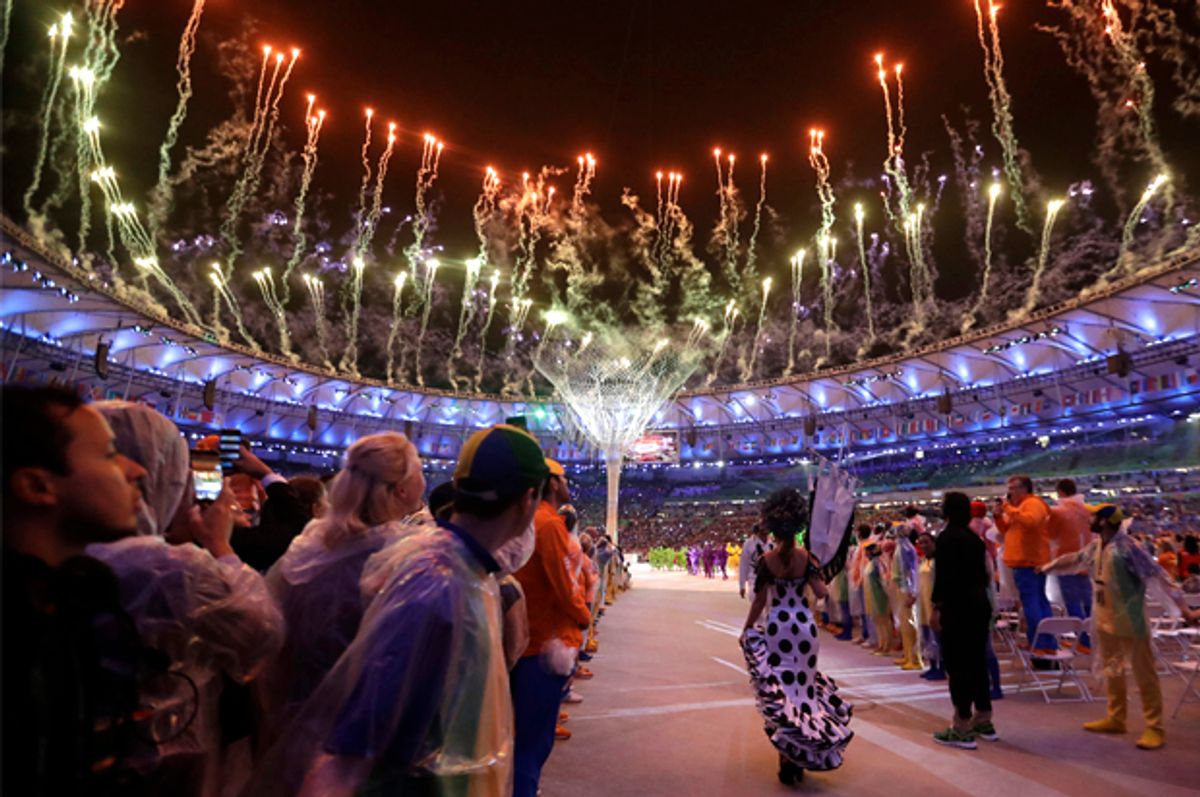 Fireworks go off after the Olympic flame was extinguished during the closing ceremony of the 2016 Summer Olympics in Rio de Janeiro, Brazil, Sunday, Aug. 21, 2016. (AP Photo/David Goldman) (AP/David Goldman)
--

Greek gymnast Eleftherios Petrounias knew just what he needed to do after winning the gold medal in the rings competition at the Olympics last week. “I will be quick because my mom is waiting,” he said, before running off to hug her in the stands.

The comment drew guffaws back in Greece, where a well-worn stereotype holds that men are fiercely loyal to their mothers. But Petrounias also gave a proud shout-out to his damaged country, which has been bruised by a seven-year recession and—most recently—by waves of refugees from the Middle East.

Actually, Greeks worry a great deal. Polls consistently show that most citizens have lost faith that their country can pull itself out of its economic doldrums.  “We have a crisis of the government system in the eyes of the people,” the mayor of Athens admitted last fall, when I was living there. “We’ve become tired, and we’ve become stuck.”

What can the rest of us do to help? The international community has provided several bailouts in exchange for austerity measures, which have only made matters worse. But here's one thing that might make them better: moving the Summer Olympics to Greece. Permanently.

There’s no good reason to keep rotating the games every four years to a different country, which must then expend billions of dollars on new infrastructure. The Brazilian government and private investors are spending between $12 billion and $20 billion on this year’s Olympics in Rio, which will probably generate no more than $4 or $5 billion in revenue. No wonder two-thirds of Brazilians in a recent survey said that they thought the Olympics would hurt their country.

Likewise, many Greeks date their nation’s debt crisis to the 2004 Athens Olympics. Greece sank about $11 billion—twice its original projection—into the games, which inflated its debt to 7.5 percent of its GDP. The only organization that profited was the International Olympic Committee, clearing about $1 billion from the 2004 games.

So the IOC should take charge of creating a permanent home for the Olympics in Greece, which could ease its debt burden by selling land for the facility. Meanwhile, the IOC could pay for construction by floating bonds based on future revenues.

The Olympics originated in ancient Greece, of course, which is why Greek athletes still march first in the opening-night parade. And when the modern Olympics were revived in Athens in 1896, plenty of people—including the American delegation—thought the games should remain there.

But the leader of the modern Olympics movement, French historian Pierre de Coubertin, wasn’t having it. “No one could believe for a moment that Athens would be able to go on indefinitely every four years making the supreme effort required for the periodic renewal of the organization and the financing,” de Coubertin argued.

With the assistance of the international community, however, Greece could surely serve as the permanent home for today’s Olympics. Some observers have suggested that the IOC build a new facility on a deserted Greek island or on the Peloponnesian peninsula, site of the ancient Games. Others say that the buildings erected in Athens in 2004 could be upgraded and expanded for future Olympics.

Right now, however, they’re in massive decay. Swimming pools have dried up and running tracks are covered with moss. And at the Hellinikon Olympic Complex, a stadium built near the old Athens airport, thousands of refugees have taken up residence amid the playing fields and spectator seats.

My wife and I took a walk by the Hellinikon facility last fall, before the refugees arrived. It was strewn with trash and graffiti, a dilapidated monument to the frayed Olympic ideal. Now it’s a holding pen for unfortunate souls who never wanted to live in Greece in the first place.

The refugee problem won’t be solved until there’s a new global commitment to resettling these people in other countries. And the wasteful costs and chronic corruption of the Olympics won’t be alleviated until all of us agree to hold the games in a single country, not multiple ones.

Would that erode the international spirit of the Olympics? Pierre de Coubertin certainly thought so. “The ancient games had an exclusively Hellenic character; they were always held in the same place, and Greek blood was a necessary condition of admission to them,” de Coubertin wrote in 1896. In the modern era, he insisted, “every country should celebrate the Olympics in turn.”

But it doesn't make sense to take turns between countries when we can communicate instantaneously across them. You can now follow your favorite athletes in real time, no matter where the Olympics are held. And locating the games in Greece—a small country that rarely wins more than a handful of medals—will also prevent powerhouses like China and the United States from gaining an extra advantage when they are the hosts.

Now that the Rio games have concluded, then, let’s resolve to make a permanent home for the Summer Olympics in their original one. We have the strength to achieve anything, as the triumphant Eleftherios Petrounias proclaimed last week. But we have to do it together.