Got your broomstick? IRL Quidditch gets super competitive 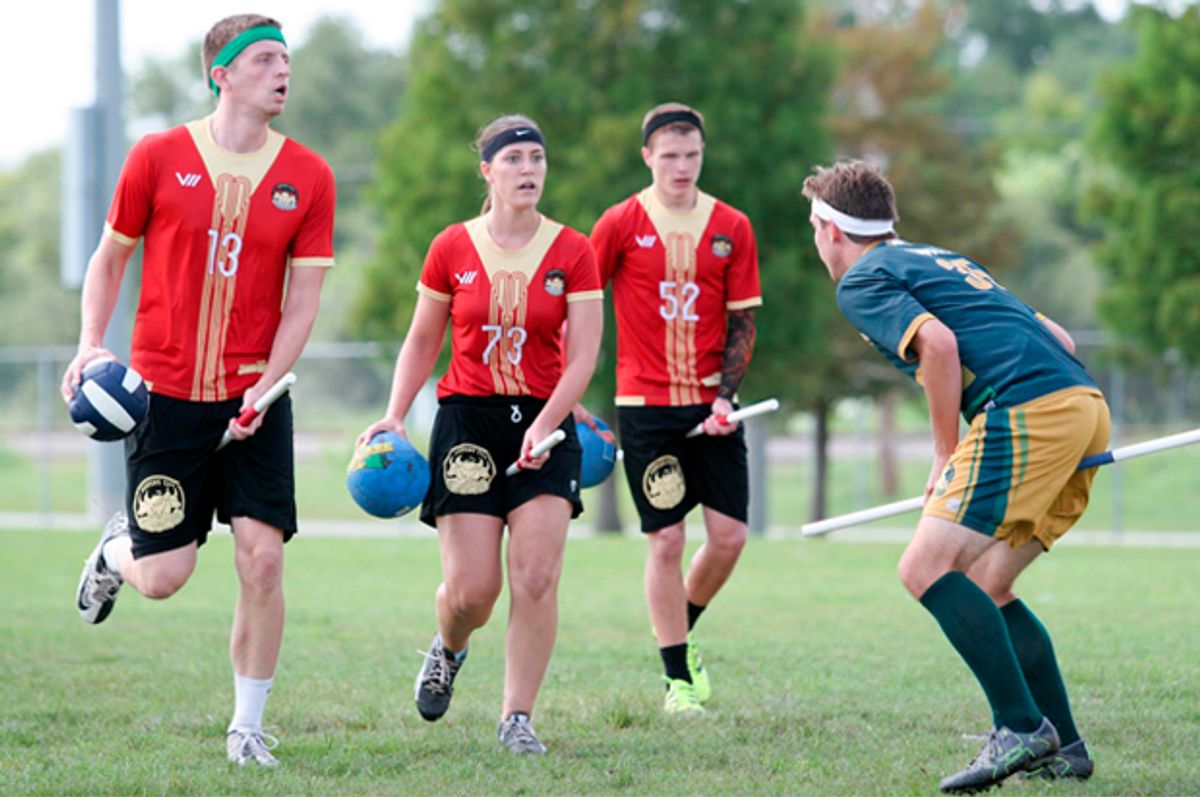 This past weekend saw two undefeated teams competing at their sports’ highest level battle in its ultimate event. Yet this hotly contested championship match was as invisible to most of us as, say, Diagon Alley is to Muggles — because the sport in question is Quidditch, the game from J.K. Rowling's "Harry Potter" series. And despite the fact that Major League Quidditch is a professional operation with 16 teams in North America, it remains a bit of a shock to learn that MLQ exists IRL. And yet there they were, the Austin Outlaws and the Boston Night Riders vying for the championship title in League City, Texas, amid the trappings of pro sports, no less. An apparel sponsor! A broom sponsor?!

The Night Riders, whose squad draws heavily from Boston area college teams, eventually prevailed — as they did during last year’s inaugural MLQ championship. The Quidditch Post's report on this past weekend's title match read as if J.K. Rowling had been ghostwriting for ESPN. The pitched competition was as follows: “Back and forth, the beater play went on, the game rarely, if ever, out of snitch range. Ultimately, in two games that proved equal on quaffle points, it was Harry Greenhouse and Jayke Archibald, with help from Boston’s superb beater play, who decided the two contests and kept the championship with the Night Riders.”

The championship match was attended by almost 400 fans. “It’s very, very intense, and people take it very seriously,” Tyler Trudeau, the Boston Night Riders’ 22-year-old keeper told the Boston Globe. He graduated in May from Emerson College, where he had been introduced to real-life Quidditch as a freshman.

As professional sports leagues go, MLQ is progressive — in the spirit of the "Harry Potter" books: It is co-ed — or “gender integrated.” (Hermione’s fight for equality was not for nothing. The league's website describes it as a “full-contact sport, particularly popular on college campuses around the world.” Indeed, real-life Quidditch, which combines elements of basketball, rugby and dodgeball, got its start about 1o years ago in pickup games played by undergrads. MLQ is for serious competitive athletes; the sport declared itself “major” only last year. Hopefuls from across the country can attend tryouts in April and May to join established major league teams including the Cleveland Riff, Austin Outlaws, Los Angeles Guardians and the San Francisco Argonauts.

The game involves six players on a side (teams have rosters of 21), all whom must play with broomsticks (sans the head — no bristles at this level of competition) between their legs. Their objective: to get the quaffle (here, a deflated volleyball) — into one of three hoops at either end of the field — and snitch, beat and hit their way to a high score. "Harry Potter" sticklers will be pleased to know that this is not a casual game. The official rule book is 206 pages long.

Passionate about the sport but not so handy with a broomstick? Fear not: There are less competitive teams organized by US Quidditch. Or just join a fantasy Quidditch league.