Insult politics: Does Trump really think he can appeal to black voters by being condescending? 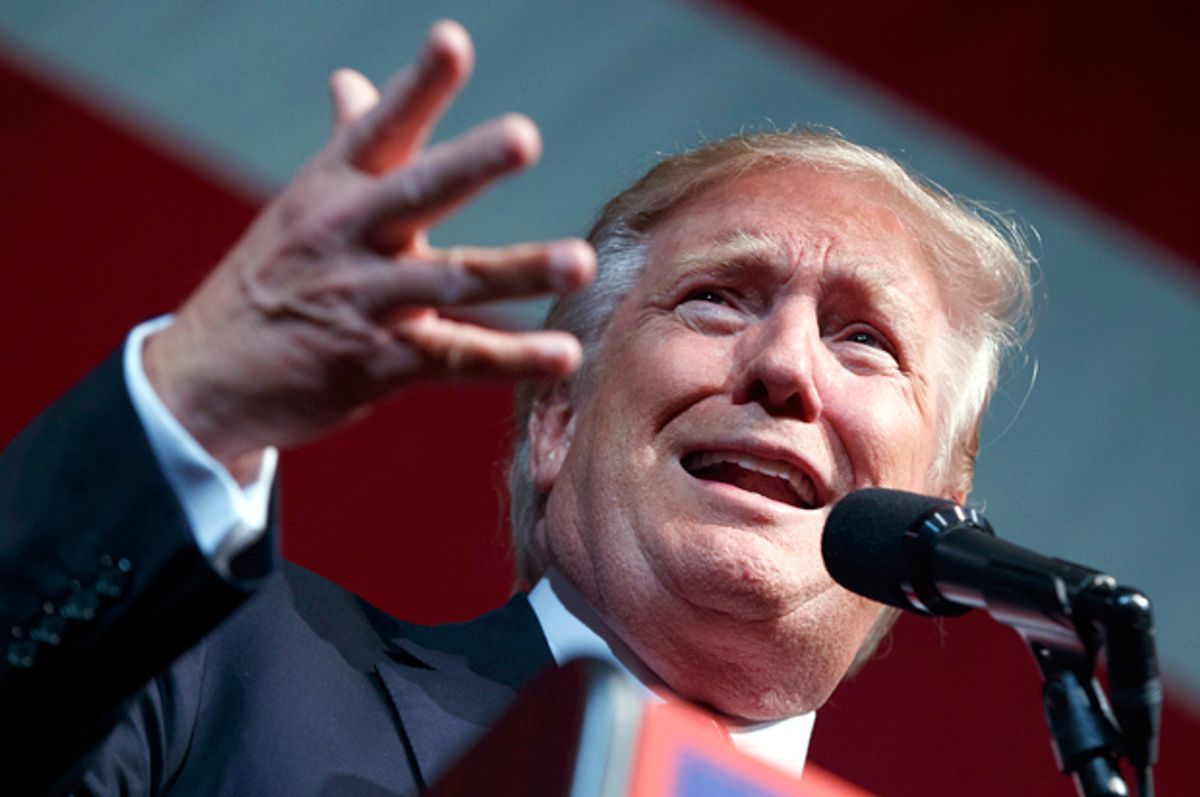 According to recent public opinion polls, 2 percent of African-Americans indicate that they will vote for 2016 Republican presidential nominee Donald Trump. This is an improvement over the 1 percent support that Trump received from African-Americans in an earlier poll.

As part of his supposed “pivot” to broaden his appeal for the general election, Trump is now making direct overtures to the black community in order to win its support. To that end, Trump has decided upon a novel and unusual strategy. He will insult and demean black Americans in front of white audiences, and by doing so, black Americans will be so impressed that they will vote for him in overwhelming numbers in November.

This is voter mobilization as flagellation.

Last week on Tuesday Trump spoke at a rally in Wisconsin's Washington County — which is one of the whitest parts of the state — and told the approximately 1,000 white people there bogeyman stories about black criminality in cities such as Chicago and Milwaukee. He then added, “I’m asking for the vote of every African-American citizen, struggling in our country today, who want a different and much better future.” Trump’s diagnosis of what ails black folks? “Democratic crime policies, education policies and economic policies have produced only more crime, more broken homes and more poverty.”

On Friday, Trump told his supporters at a rally in the 96 percent white suburb of Dimondale, Michigan, "Tonight, I'm asking for the vote of every single African-American citizen in this country who wants to see a better future. . . . What do you have to lose by trying something new, like Trump? You're living in poverty, your schools are no good, you have no jobs, 58 percent of your youth is unemployed. What the hell do you have to lose?" Trump also said that Hillary Clinton is a “bigot” who manipulates and uses black voters "only as votes, not as human beings worthy of a better future."

On Saturday, Trump told Jeanine Pirro of Fox News that African-Americans have “no health care, no education, no anything” and that their lives are “a total catastrophe.”

Trump is a lazy prevaricator; his statements about the black community are largely incorrect.

Educational attainment has improved for black Americans since the civil rights movement. Ninety percent of blacks have a high school degree. The urban legend that “there are more black men in jail than in college” is not true. In 2013, 1.4 million black men were  in college as compared with 840,000 black men in prison.

About 20 percent of black Americans have a college degree. Black women are now the most educated group in the United States.

Because of the changes instituted by the Affordable Care Act, access to medical care for black Americans has improved, with about 89 percent now having access to health insurance.

Black Americans, like other groups in America, face challenges and struggles. The race wealth gap is a threat to American democracy as well as the economic security of black and brown people. Mass incarceration limits the life chances of many millions of black Americans. Police thuggery and abuse is rampant. Continuing racial discrimination in the labor market limits the ability of college-educated black men and women to earn a full financial return on their educations.

The Age of Obama did not usher in a paradise or utopia where the black freedom struggle could cease and prosperity and equality were birthed into existence for all people on both sides of the color line. But despite Trump’s description (and perhaps wish and psychological projection) black America is not mired in a dystopian hell, bereft of hope and clinging to survival in a real-life version of John Carpenter’s film "Escape from New York."

Like the ambulance-chasing attorneys who troll hospitals and advertise on daytime television, too many commentators and observers will focus in on the tedious (and obvious) question of “Are Donald Trump’s recent comments about African-Americans ‘racist?’”

[Here is your answer: Yes.]

The real problem with Trump’s “black outreach” campaign is how it slurs and robs African-Americans of their political agency and intelligence. Despite Trump’s assertion that Hillary Clinton and the Democrats see black folks “only as votes, not as human beings worthy of a better future,” African-Americans are not dumb losers who have been tricked, bamboozled or otherwise flimflammed into voting for the Democratic Party. As research by political scientists Michael Dawson, Cathy Cohen and others has detailed, African-Americans are extremely sophisticated in their political thinking and decision-making. The black freedom struggle has been an inspiration for peoples' movements around the world. And a people who were defined by law as human chattel self-manumitted, fought for their own freedom and then selflessly struggled to expand the rights and liberties of all Americans serve as the conscience of a nation.

African-Americans are not the real audience for Donald Trump’s “outreach” campaign and his newfound concerns about how black folks’ lives are a “total catastrophe.” Trump is actually speaking to white conservatives and independents who prefer racist and white supremacist “dog whistles” to the blaring and rusty trombone that he prefers to use.

One of the social rules of the post-civil rights era is that white folks must publicly feign concern for people of color and their well-being even if — in what sociologist Eduardo Bonilla-Silva describes as the “backstage” — they hold animus towards black and brown people.

Donald Trump’s new effort to win black and brown voters is in keeping with that script. His recent insults about black voters and the Democratic Party are not new. Today’s Republicans, aided and abetted by their black conservative human mascots, routinely say that African-Americans are “uninformed,” “stuck on a Democratic plantation,” or “bought off” by “welfare and food stamps.” While the party elites may try to disown him, Trump is once again showing that he is the logical outcome of almost five decades of Republican policies and a right-wing news-entertainment-disinformation media that has used white racism to win elections and feels great disdain toward black Americans.

Ultimately, Donald Trump’s black outreach campaign is old stale wine in a slightly less old bottle. Black folks are too smart and wise to drink such swill. It is only Donald Trump’s supporters who would drink such poison, think it good and ask for more.