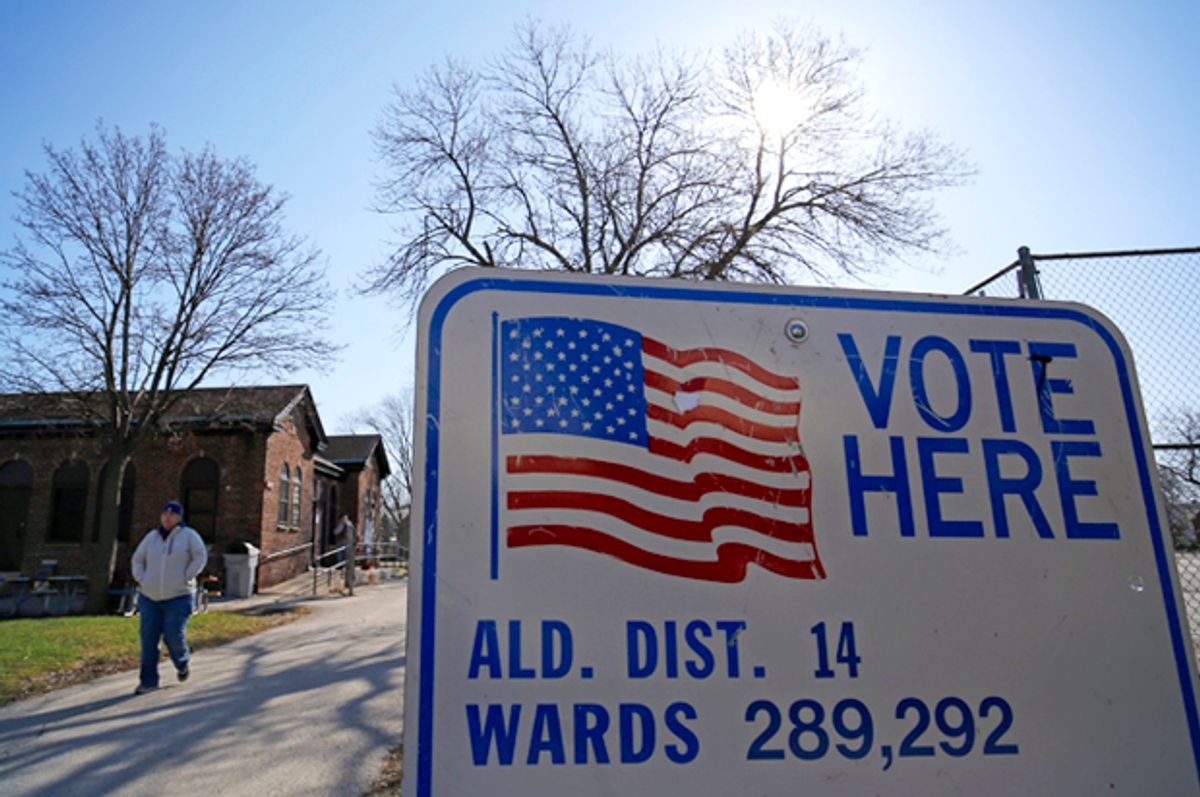 At the risk of employing an overused quote, the 20th Century's most notorious propagandist, Joseph Goebbels, famously said, "If you tell a lie big enough and keep repeating it, people will eventually come to believe it. The lie can be maintained only for such time as the State can shield the people from the political, economic and/or military consequences of the lie." There are innumerable modern examples of the efficacy of this strategy, repeating a lie, but few are as obvious as the push for voter ID laws as a means of thwarting alleged "voter fraud."

Following the historically disastrous 2000 election debacle, when the laser-like focus should've been all about reforming elections by standardizing the voting process and guaranteeing equal and convenient access to polling places, the GOP, instead, set about attacking a separate and distinct problem; a problem which the party conjured out of thin air, to expressly disenfranchise Democratic voters. It wasn't about irregularities with voting machines, "hanging chads" or butterfly ballots, they said; it was all about individual voters scamming the system. That was the myth they concocted to cover up the obvious trespass against voting rights. The lie is called "voter fraud."

Republicans including Donald Trump insist that voter ID laws and voter purges are the only way to fight this invisible epidemic. The truth is, voter fraud is statistically nonexistent. The most frequently cited debunking of voter fraud comes from the Bush administration's Justice Department, which conducted a multi-year study showing the rate of voter fraud is roughly 0.00000013 percent. In Iowa, an investigation conducted in the wake of the 2012 election managed to smoke-out exactly eight cases of voter fraud. Most of the cases appear to have been benign. By the way, there were 1.5 million votes cast in Iowa in the 2012 election, which means the rate of alleged voter fraud was 0.00053 percent. Can you imagine undergoing compulsory radiation and chemotherapy if your oncologist told you there was only a 0.00053 percent chance you'd die from cancer? Worse, as of this writing there hasn't been a single conviction. So, really, the rate of convicted voter fraud in Iowa is zero percent.

Yet the propaganda has completely overpowered the truth, leading to the results of a new poll that underscores rampant privilege and the power of the lie.

Second only to the denial of climate change, this is perhaps the most astonishing example of mass delusion in modern American history. A vast supermajority of Americans believe there's a voter fraud crisis even though every legitimate investigation has turned up literally nothing. In a nation that's increasingly confronted by cosmetic security measures, it's possible that Americans are simply resigned to the idea of presenting IDs in order to vote, not realizing that voting rights ought to extend to everyone who chooses to cast a ballot, and not just those lucky enough to afford the access.

Imagine you're 94-years-old and you’ve voted in every election since 1936. You don’t drive. You live more than a dozen miles from the nearest government services office. And now, in your home state of Pennsylvania, Republican leaders who've admitted to conspiring to disenfranchise Democratic voters, have passed a law mandating that you have to apply for a government identification card if you'd like to vote again. (Indeed, numerous Republicans have accidentally blurted the truth about voter ID laws.)

This is the story of Bea Bookler of Devon, Pennsylvania who, prior to the 2012 election, had to somehow find a ride to the nearest DMV, then had to stand in interminably long and potentially confusing lines for hours on end, in order to retain her well-worn right to vote.

“How would I get there and how would I manage to stand in a line?” says Bookler, who uses a walker. She says she can barely make it to the polling place next door to her retirement community. She also doesn’t understand why she has to go to all this trouble in the first place. She already has a voter registration card.

“I have an ID which says I am registered to vote in Chester County. There is no reason why I should need anything else. It’s an outrage,” she says.

There must be a serious voter fraud crisis in Pennsylvania that motivated lawmakers there to pass voter ID laws, right?

Thirty-one states, mostly red states, now require some form of voter ID at polling places. In other words, thanks to this nefarious GOP disenfranchisement scam, three-fifths of the nation is required to pay a fee while potentially losing additional wages from lost work in order to vote. Making matters worse, too many of the voter ID laws are, in a word, ludicrous. In Mississippi, the voter ID law there requires that a birth certificate be presented in order to get a photo ID, but a photo ID is necessary in order to attain a copy of a birth certificate. Elsewhere, in Texas, the voter ID law there, which was gratefully overturned by the courts, required voters to have one of six different forms of ID. If you didn't have one of these IDs, you'd have to apply for an Election Identification Certificate (EIC). But in order to acquire an EIC, you'd have to present your proof of citizenship and a second form of identification. Yes, that's right, you needed to get an ID in order to get an ID -- one of many reasons why this law, and too many others, was so completely preposterous.

Despite the obvious insanity, it appears as if the courts are the only remaining roadblocks against more voter ID laws, knowing how the American public has been entirely suckered by the lie.