The alt-right attacks sci-fi: How the Hugo Awards got hijacked by Trumpian-style culture warriors 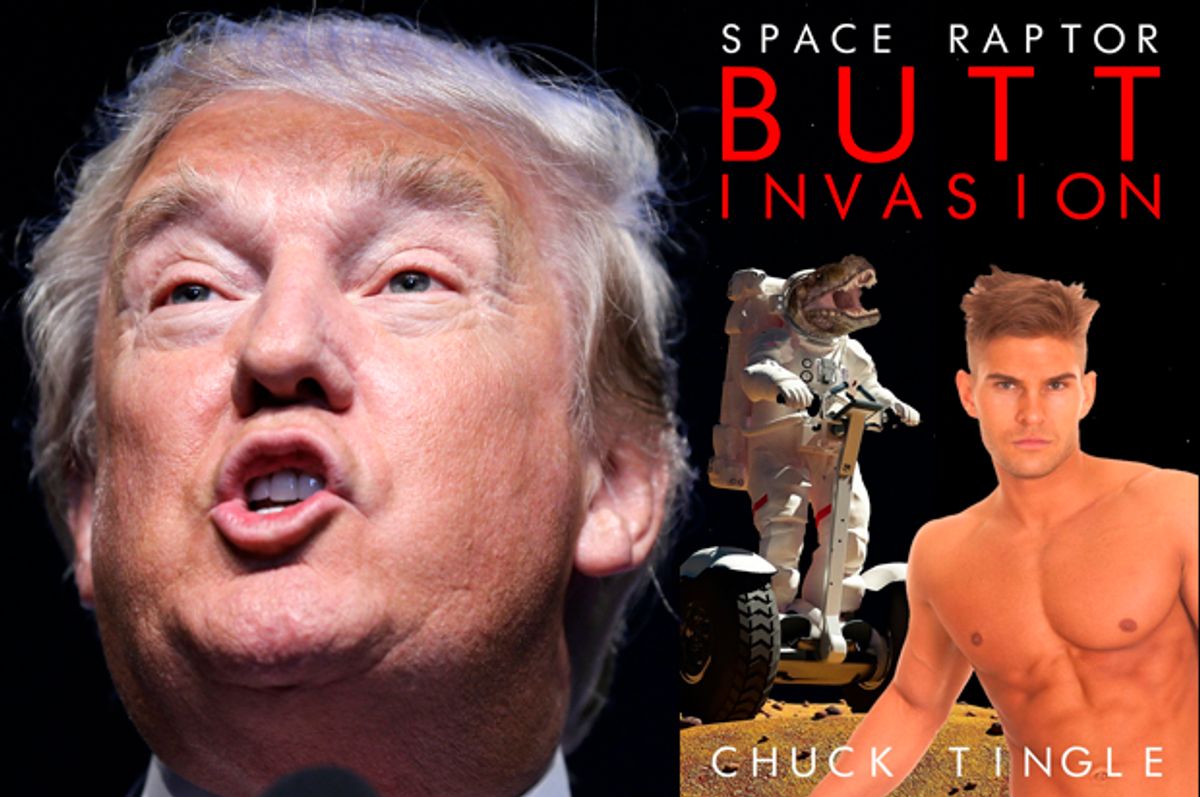 For those who want to understand the social dynamics of the Donald Trump revolution — and why it is almost certain to fail — look no further than the ongoing kerfuffle over the Hugos, an annual set of awards for excellence in sci-fi and fantasy, which have been under attack by a bunch of embittered reactionaries.

Since 1955, the Hugos have been awarded through a fairly straightforward process: Members of the World Science Fiction Convention nominate and then vote on their favorites in a variety of categories. Past winners have included luminaries like Isaac Asimov, Ray Bradbury, Connie Willis, Robert Heinlein and George R.R. Martin.

That all changed two years ago, when a group of conservative sci-fi fans and writers, believing that sci-fi had been taken over by "social justice warriors" who supposedly emphasize diversity and progressive themes over quality, revolted and set out to take over the Hugos so that the nominees and winners were whiter, more male, and more conservative.

Two overlapping groups of conservatives — deeming themselves the Sad Puppies (more standard conservatives) and the Rabid Puppies (more alt-right and white supremacist) — began publishing suggested ballots, prior to the Hugo nominations, so that their people could vote for finalists as a bloc and crowd all other potential nominees off the ballot. Collectively, they are known as the Puppies, a choice which not coincidentally makes them sound cuter and sweeter than a nest full of reactionaries and outright bigots has any right to sound.

It's an effective strategy, because every other WorldCon member just nominates who they like, meaning that their votes are split up amongst hundreds of potential nominees. The strategy is reminiscent Trump's path to the Republican nomination, which depended on running against a crowded field that divided opposition to him.

For the Puppies, this strategy effectively allowed them to block out the people who would be expected to be finalists any other year, and flood some categories with hacks and reactionaries who may not be great writers, but have politics more to their liking.

“The Puppies, a lot of them — certainly their ringleaders — they’ve got a huge overlap with Gamergaters, men’s rights activists, that whole wing of the internet," Teresa Nielsen Hayden, a sci-fi editor and writer explained to me over the phone.

“They’ve concocted this scenario where everyone in science fiction is obsessed with them and trying to do them in because they’re conservative," she added. By casting themselves as victims of this imaginary conspiracy, she argues, the Puppies rationalize their behavior as a form of self-defense.

The Hugo awards ceremony "only represents tiny, insular, politically motivated cliques taking turns giving their friends awards," Larry Coreia, a ringleader of the Puppies, argued in 2015. Because of this supposed conspiracy — for which there continues to be no real evidence — he felt justified in helping organize an actual conspiracy of his tiny, insular, politically motivated clique to flood the ballot with conservatives.

So much so that the 2015 ballot drew heavily from one house, Castalia House, which is run by Theodore Beale, who also goes by the name Vox Day. Beale is a belligerent white supremacist who has recently been spotted going on a tirade against black female novelist N.K. Jemisin, who he deems an "ignorant half-savage" and sneering that only white men are capable of "building an advanced civilization."

The takeover of the 2015 ballot so enraged normal sci-fi fans that they ended up voting "no award" in categories like Best Novella and Best Short Story where the only nominees were Puppy nominees.

Correia claimed this was evidence that "voters cared far more about the author’s identity and politics than they did the quality of the work." The likelier truth, however, is the opposite: The Puppy picks were hack works chosen on political grounds, and the voters rejected them because they sucked.

Damien Walter of the Guardian took a bullet and read some of the Puppy-preferred works, deeming them mediocre at best and barely passable as fiction in other cases, especially with regards to the work of writer John C. Wright.

Sci-fi writer Naomi Kritzer concurred with Walter during an interview.

"Supposedly this is a campaign originally organized against 'boring message fic' and yet one of the stories foisted onto the 2015 ballot was a John C. Wright novelette in which Saint Nicholas berates a grieving mother for her inadequate faith and then lectures her at length about theology," Kritzer said.

"That's the whole story: no plot, no action, no excitement, just literally boring message fic, but it's a message of John C. Wright's unique brand of Catholic orthodoxy, which I guess someone considered jolly good fun," she added.

It is telling that the Puppies simultaneously hold themselves out as the guardians of quality literature and as the protectors of "fun" fiction against the forces of pretentiousness. The contradiction goes unnoticed by the right, however, which pulls on whatever justification is most convenient for arguing that this random white guy is more worthy of awards than women or people of color.

Watching Hugo voters choose "no award" instead of their nominees did not teach the Puppies Catholic virtues like humility or grace, however. Instead, many became consumed with rage. If they couldn't take over the Hugos, the next step was to destroy them.

Beale got to work putting together ballots that were no longer just about stuffing the ballot with right-wing hacks, but a naked attempt to troll progressives by nominating essays like "SJWs Always Lie: Taking Down the Thought Police" and half-assed satires of better, progressive writers.

Beale also set out to stuff the ballot box for a story called "Space Raptor Butt Invasion" by Chuck Tingle, who is a beloved cult figure on the internet for his satirical faux-erotica. Tingle had no previous relationship with the Puppies, most of whom are far too homophobic to really enjoy the campiness of his work.

“They put [Tingle] up because they thought his titles would be embarrassing" to Hugo voters, Nielsen Hayden explained.

Beale gloated on his blog that the only thing that "would be more spectacularly awesome" than Tingle winning would be if Trump were elected president.

But Tingle, who claims to be a Tae Kwon Do grandmaster and masseuse from Billings, would not allow himself to be used by a bunch of bigots who think his work is an embarrassment just because it's about gay dinosaur sex in space.

Over email — he has an idiosyncratic email-writing style, fair warning — Tingle wrote that at first the nomination "made me a hard man about billings thinking on all those buckaroos who voted for chuck." Swiftly, however, he "learned about voxman and the bad dogs blues (this is his clan of lonesome men)" stuffing the box.

"[S]o instead of backing down from scoundrels i decided to PROVE LOVE even harder and show that no devils can break the heart of a true buckaroo like man name of chuck (or the butts heart)," Tingle continued.

His strategy was to troll the Puppies — or as he calls them, "voxman and the bad dog blues" — by sending Zoë Quinn, a video game developer who has been dogged for years by anti-feminist nuts online, to accept his award, should he win.

"[I] learned that the scoundrels named VOXMAN AND THE BAD DOGS BLUES did not like this ladybuck name of zoe so i hatched a plan and then i ask her to ACCEPT this important award," Tingle explained.

Nielsen Hayden reported that Quinn showed up dressed to the nines as a unicorn, ready to accept Tingle's award.

Instead, Kritzer, whose story "Cat Pictures Please" was the one non-Puppy pick this year, deservedly won for her delightful portrayal of a search engine that gains both sentience and benevolence.

Wright reacted with rage, as reactionaries tend to do in these circumstances, and implied that Kritzer's win was just some kind of social-justice charity pick and that this lady writer ain't no one special.

"However, anyone can read ‘Cat Pictures Please’ by Naomi Kritzer and compare it with ‘The Star’ by Arthur C. Clarke, with ‘Or All the Seas with Oysters’ by Avram Davidson, ‘Flowers for Algernon’ by Daniel Keyes, ‘The Dragon Masters’ by Jack Vance, ‘No Truce with Kings’ by Poul Anderson," Wright sneered angrily on his blog.

Wright had some words for Walter's Guardian article which criticized his work, as well, saying, Walter has "a tin ear when it comes to prose".

"Perhaps I am not an intellectual colossus, but I am the very modern of a modern major general," Wright continued, showing the world what truly beauteous prose reads like, "for I know the croaking chorus of the FROGS of Aristophanes: Βρεκεκεκέξ κοάξ κοάξ."

But Kritzer points out that it was the Puppies themselves that lowered the overall quality of the nominees this year.

"Due to the Rabid Puppy slate, my story was in competition with such works as 'Space Raptors Butt Invasion' and 'If You Were An Award My Love,'" Kritzer said. (The latter is a parody of a story about homophobia by sci-fi writer Rachel Swirsky that drew Puppy ire after it received a 2014 Hugo nomination.)

"If Wright considers my story unworthy of a Hugo — which is an entirely legit opinion, tastes vary — I would encourage him to take a look at the four other stories that would have been nominees," Kritzer continued. "Would he like them better than mine? Quite possibly! But they were not on the ballot because of a slate he supported and participated in."

Kritzer's observation speaks volumes about the incoherence of the reactionary politics that are driving the Puppy campaign — and, in national politics, the Trump campaign. Despite all the claims to make America "great," the actual behavior looks quite a bit like kneecapping the aspirations of women, people of color, and queer people so that straight white male mediocrities don't have to deal with the competition.

Unfortunately for the mediocre men driving the Puppy campaign, their efforts failed even more spectacularly in 2016. The four winners this year of fiction awards were all women, and three were women of color, none of whom were on Beale's Rabid Puppies slate.

Just to drive the knife in, Neil Gaiman, who was one of the Puppy picks who did win (for Best Graphic Story), used his acceptance speech to denounce them.

"I would have withdrawn it from consideration," Gaiman said of discovering that his nomination had Puppy support, "but even that seemed like it would have been giving these sad losers too much acknowledgement."