Hollywood's gender pay gap might not feel relatable for the average worker, but it's part of a bigger problem 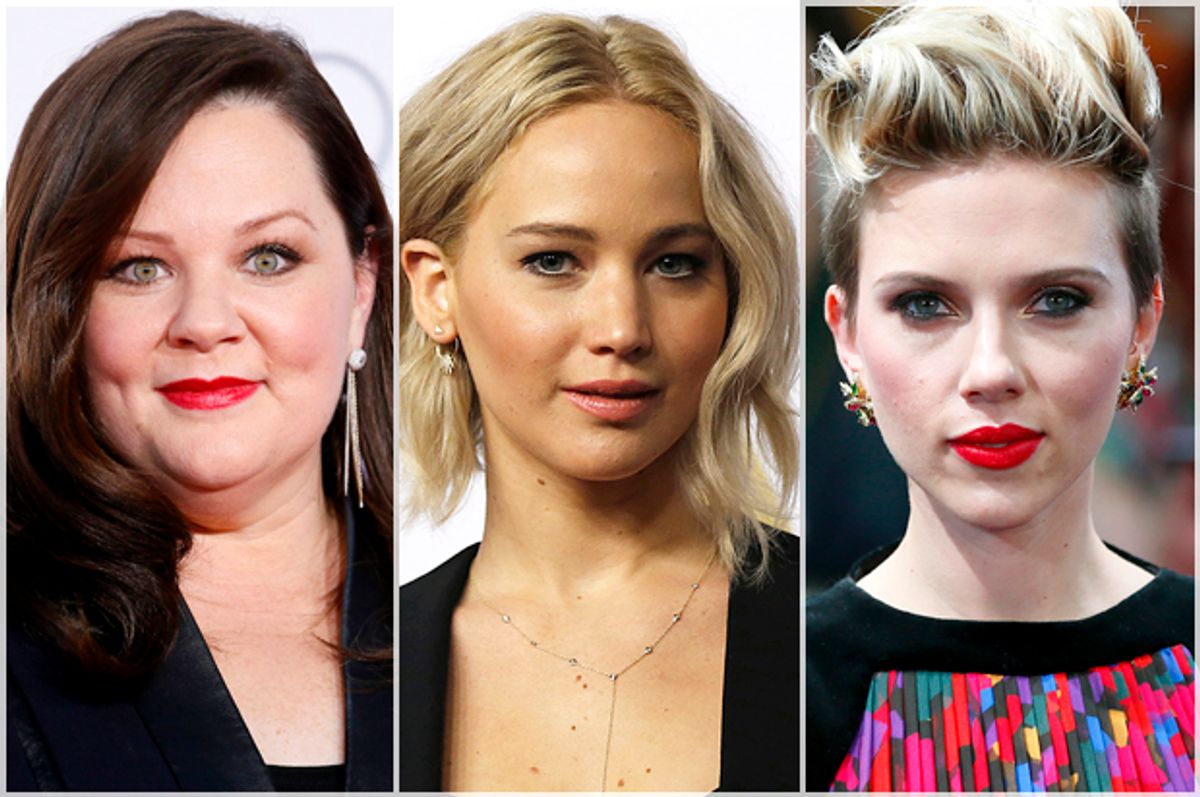 Someone can be the biggest movie star in the world, but if that performer is a woman, she’ll still earn less than a man.

Today Forbes released its report on the highest-paid actresses in Hollywood, and for the second year in a row, “Hunger Games” star Jennifer Lawrence topped the list. Lawrence, who recently appeared in “X-Men: Apocalypse,” is set to rake in $46 million 2016. The runner-up was “Ghostbusters” star Melissa McCarthy ($33 million), followed by Scarlett Johansson ($25 million) and Jennifer Aniston ($21 million). Chinese actress Fan Bingbing ($17 million) rounded out the top five. Absent from the list are Sandra Bullock, Reese Witherspoon and Kristen Stewart, who made last year’s roundup.

Those numbers, while seemingly impressive, pale in comparison to what their male counterparts are taking home. Dwayne Johnson, the former WWE star who appears in the “Fast and Furious” franchise, will make 40 percent more than Lawrence this year. His $64.5 million earnings was featured on Forbes’ list from earlier this year of the highest-earning celebrities, which also included Jackie Chan ($61 million), Matt Damon ($55 million), Tom Cruise ($53 million) and Johnny Depp ($48 million).

To put it in further perspective, Lawrence barely makes more than Ben Affleck ($43 million), who spent the goodwill he earned on winning Best Picture for “Argo” to make misfires like “Runner Runner,” ‘To the Wonder” and “Batman v Superman.” Outside of the “Fast and Furious” movies, Vin Diesel has not starred in an unqualified hit in which he actually appears on-screen since “The Pacifier”  in 2005. The 49-year-old actor still makes more than Melissa McCarthy, one of the most consistently bankable stars in Hollywood. Diesel’s $33 million earnings are twice what Oscar-winner Charlize Theron ($16.5 million) will take home in 2016.

These pay discrepancies improved very slightly from the previous year, when Robert Downey Jr. was the highest-paid actor. His pay ($80 million) was 53.8 percent higher than Lawrence’s 2015 salary. J-Law was in two films last year, “The Hunger Games: Mockingjay—Part 2” and “Joy,” while Downey was in just one, “The Avengers: Age of Ultron.” Despite the fact that “Mockingjay” earned $653 million worldwide, Lawrence got just $7.5 million of that cut.

While Downey earns big bucks from Marvel’s success, 90 percent of these women, as Forbes noted, had to supplement their incomes with endorsement deals to earn even a fraction of what their male co-stars make. Aniston is the face of companies like Smartwater, Aveeno and Living Proof, a no-frizz hair care product sold at Sephora. Johansson has been a spokesmodel for Louis Vuitton, Dolce & Gabbana, Calvin Klein and SodaStream. McCarthy even founded her own body-positive fashion line.

These pay gaps are true for women across the entertainment industry, including actresses, writers, directors, producers and the studio executives who write everyone’s checks. “Women in the arts, entertainment, sports and media industries earned 85 percent of male counterparts’ pay last year,” The Guardian reported last year. The December 2014 Sony document hacks revealed that only one female executive at the company had a million-dollar salary: Amy Pascal, the former co-chair of Sony. The other 16 names on the list were male. While male auteurs like Steven Spielberg command hefty paydays behind the camera, few female directors have the institutional clout to negotiate comparable salaries.

If women in Hollywood are valued less than the men around them, that’s not only sexist. It’s also a bad business decision. In a survey of films released from 2006 to 2015, Mic’s Kevin O’Keefe found that movies starring women best the male competition at the box office. Movies like “Pitch Perfect 2,” “Bridesmaids,” and “The Proposal” earned $126.1 million on average, taking in 56 percent more than male-led films did over the same period. Films starring men brought in an average of just $80.6 million.

Lawrence herself has been the named most bankable star in Hollywood from outlets like Vulture and Forbes, as well as Quigley’s yearly poll of movie theater owners and film buyers. On Forbes’ list of celebrities who represent the biggest return on investment for studios, she ranked eighth — bringing in $39.10 for every dollar her films earn. Of the top five, four were women, which shows not just that these actresses are in demand but that they are undervalued given how much their films gross. These names include Mila Kunis, Gwyneth Paltrow, Scarlett Johansson and Emma Stone. In contrast, every single one of the most overpaid actors are men, a roll call that includes A-listers Tom Cruise, Will Ferrell and Johnny Depp.

It’s odd timing that production on “Mission Impossible 6,” the long-running film franchise featuring Cruise as superspy Ethan Hunt, shut down this week. Filming had to be halted so the 54-year-old actor could negotiate his already very large salary. Cruise, who serves as a producer on the series, has lucrative back-end deals that net him a portion of the film’s final gross. When “Mission Impossible II” earned $546 million worldwide in 2000, he walked away with $100 million.

It’s hard to imagine a woman having that kind of power — to literally stop the show if her needs are not met. On the list of biggest paydays ever, only Sandra Bullock ranks in the upper echelons: When “Gravity” became a global phenomenon, she banked $70 million. Women who attempt to negotiate such enormous profits are often branded as difficult. That’s why, as Jennifer Lawrence explained in an op-ed for Lena Dunham’s Lenny Letter, she learned to blame herself for getting paid less than her male co-stars — in order to avoid being seen as a “problem.”

The issue of wage disparity might seem overwhelming, but women like Patricia Arquette, Jessica Chastain, Rooney Mara and Sienna Miller have worked to address it by speaking out. Miller, who appeared in “American Sniper,” turned down a role on Broadway when she learned she would be making half the male lead’s salary. Charlize Theron won equal pay with Chris Hemsworth on “The Huntsman: Winter’s War,” while Lawrence fought to have a higher paycheck than co-star Chris Pratt in the upcoming “Passengers.”

The latter case is particularly notable. After notoriously earning less than the male cast members of “American Hustle,” Lawrence made sure that mistake wasn’t repeated. Under Pascal’s tenure at Sony, she was offered $20 million for the project — $10 million more than Chris Pratt, who had recently broken out in “Guardians of the Galaxy.” After Tom Rothman took over the studio, he reportedly attempted to talk her down, but Lawrence threatened to exit the long-delayed project and take director Morten Tyldum (“The Imitation Game”) with her. Sony eventually agreed to her price, likely making her the highest-paid actress on next year’s Forbes list, too.

Not every woman, though, will be as lucky at Lawrence. Across the U.S., women commonly earn 78 cents for every dollar a man earns, and that pay gap is exacerbated for people of color. A Latina who is more than 50 years old can expect to earn just 48 percent of what her white male co-workers make. The trials of rich celebrities like Jennifer Lawrence and Melissa McCarthy might seem “unrelatable,” as Lawrence wrote, but unfortunately women everywhere remain undercompensated and undervalued. The pay gap is everyone’s problem.