"I’m a white male, and I am prejudiced": Watch one C-SPAN caller's powerful confession and critical question to a black guest

"I don’t want my fears to come true ... I come off as being prejudiced, but I just have fears" 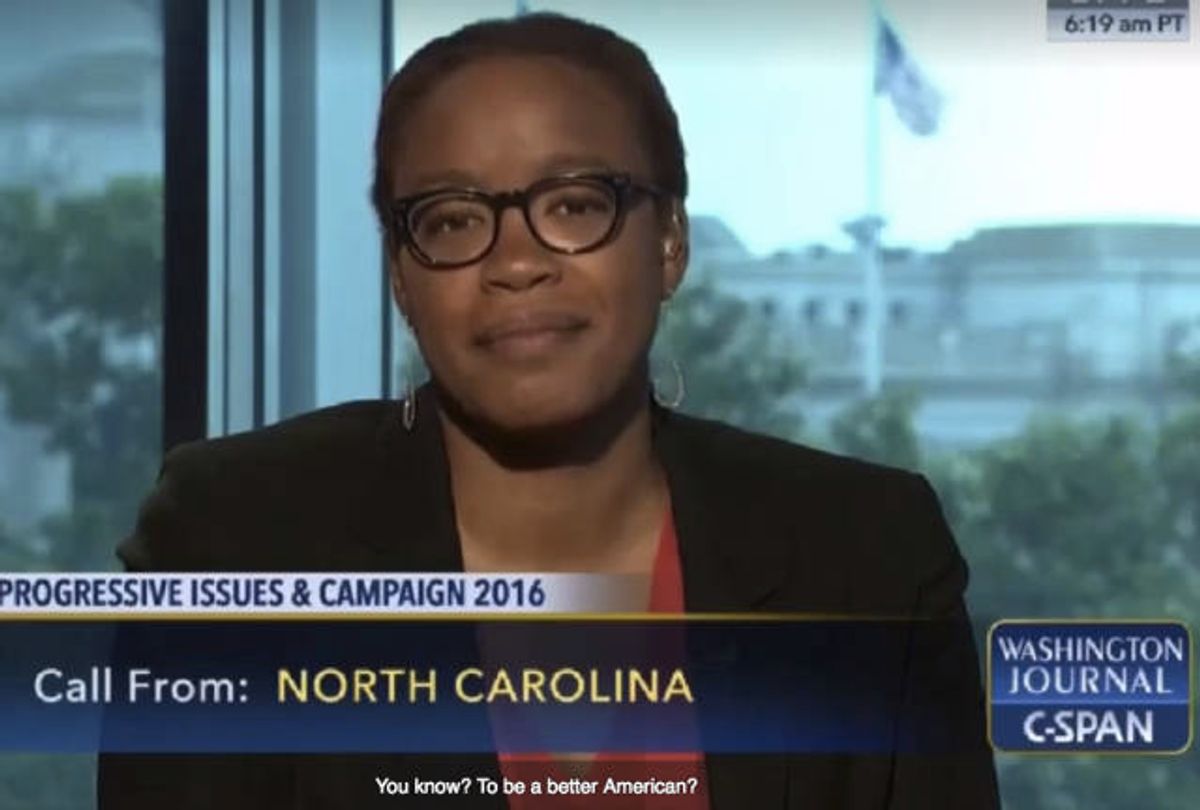 When Heather McGhee, president of Demos Action, appeared on C-SPAN's "Washington Journal" to discuss progressive policy and the 2016 election last week, she fielded the familiar (and often off-the-wall) gambit of C-SPAN callers for nearly an hour. Towards the end, however, she was was met by one particular caller and his powerful, as McGhee described, "cry for help to know the humanity of black people."

"I was hoping your guest could help me change my mind about some things," Gary, an Independent from Fletcher, North Carolina, said during the August 18 edition of the C-SPAN staple.

"I’m a white male, and I am prejudiced," he went on to admit with a calm tone, seemingly taking McGhee by surprise a bit.

"The reason it is is something I wasn’t taught but it’s kind of something that I learned," he explained. "When I open up the papers, I get very discouraged at what young black males are doing to each other, and the crime rate."

"I understand that they live in an environment with a lot of drugs — you have to get money for drugs — and it is a deep issue that goes beyond that," he caveated. "But when, I have these different fears, and I don’t want my fears to come true:"

"What can I do to change," Gary finally asked with every bit of sincerity. "You know, to be a better American?"

“Thank you so much for being honest and for opening up this conversation because it is simply one of the most important ones we have to have in this country,” she said.

McGhee told Gary that his simple, yet poignant, admission is “one of the most powerful things that we can do right now in this moment in our history.”

"So what can you do?" McGhee offered. "Get to know black families. Turn of the nightly news."

McGhee later explained to The Washington Post, that Gary would be best served from a mix of historical and interpersonal education.

He specifically was coming to me saying, ‘I get my news about black people from the media, and I’m scared to go into black neighborhoods.’ It was clear to me he didn’t know a lot of black people, so for him absolutely, first things first, build relationships. It’s also important to note, I said, read the history. The interpersonal is important, but people can have black friends and colleagues and still hold prejudiced ideas and support policies and economic and political systems that harm people of color. For him, it felt like it was a cry for help to know the humanity of black people.

Watch the powerful C-SPAN exchange below: