John Krasinski's family affair: Why making "The Hollars" felt "like we were shooting a home video"

Salon talks to "The Office" star about his new family drama, which he also directs 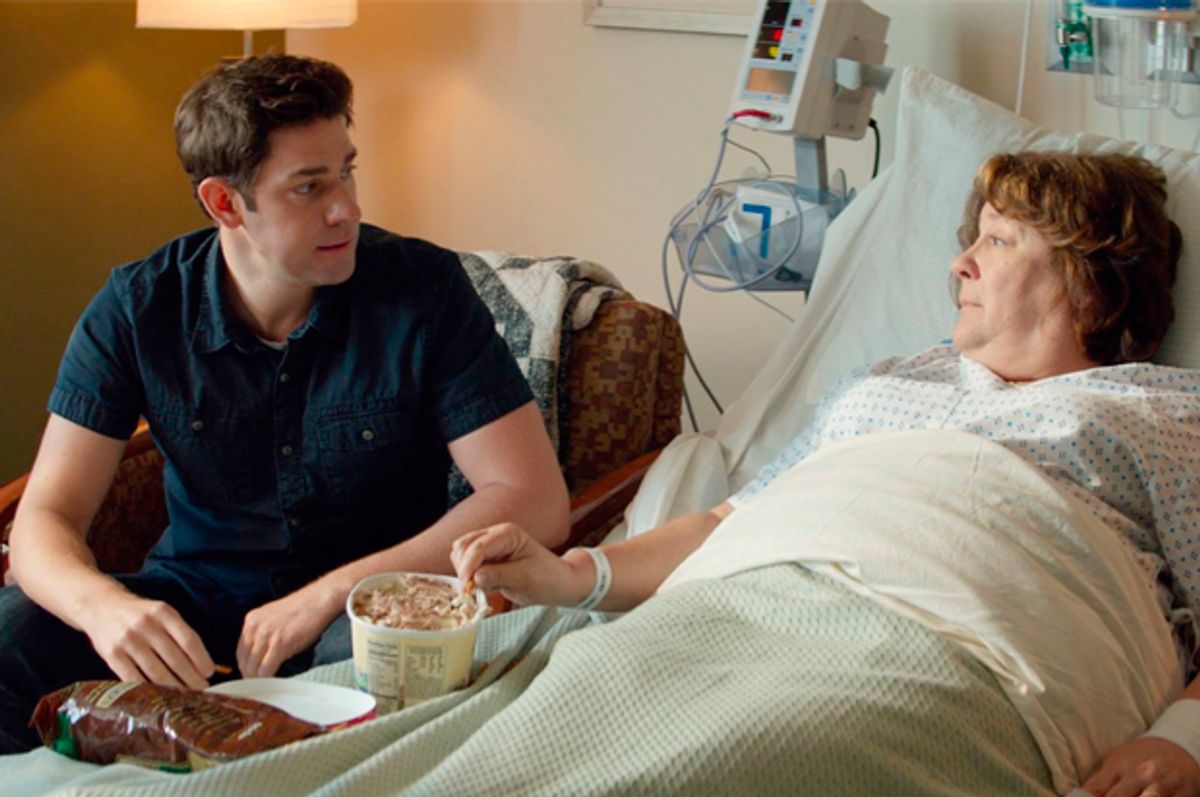 Krasinski has returned to directing with a new film, “The Hollars,” in which he also has a leading role. He plays the New York-based son of a woman who is diagnosed with a serious brain tumor early in the movie: He returns to his hometown, and is cast into various kinds of family chaos. As conventional as much of the movie is, its cast and acting make it worth attending to, especially Margo Martindale's role as the ailing family matriarch and Sharlto Copley as the disoriented brother of Krasinki’s character.

We spoke to Krasinki from Los Angeles, where he was promoting the film. Over the phone, Krasinski comes across a little like his “Office” character — open, down to earth, and friendly to almost a ridiculous degree. The interview has been lightly edited for clarity.

How did the seed of the movie come to you? Did it start with you finding the script?

That’s exactly right, you nailed it! A few years ago, when I was doing “The Office,” someone sent me this script… To be honest, we can all admit that there are a ton of family movies out there. I had no intention of doing a family movie or doing anything derivative. But then I read this script. This was so incredibly specific and real and honest and I just thought, wow — any genre, if it’s this well-written, you’ve just got to dive into it.

So I signed on as an actor five or six years ago, and the financier at the time couldn’t get the movie made, so asked me if I’d buy the script myself and take on the responsibility myself. Which is a big deal. But I thought the script was so good, and these films don’t get made anymore, so I decided to do it.

Oh, definitely. I love “Ordinary People,” I love “Terms of Endearment”… Those movies are special, as you said, because they’re not just about family — they’re about coping, about understanding each other, and about relationship — they had it all.

The casting is important here. These are people who've been together for a long time; they’ve got a lot of warm feelings for each other, but there’s also a lot of tension as well. What was your process in trying to put together the right group of actors for this?

Thank you for saying that. We didn’t even have a casting director for this — I just picked up the phone and called people myself. Which I think is pretty awesome. It’s a new world; you’re able to do that more nowadays.

All the people I wanted to do it said yes. My first call was to Margo Martindale. If she had said no, I don’t think I’d have directed the movie. First of all, very few people are as good as her, she’s one of the best actresses on the planet. And for this role, having a character who’s so strong and emotionally powerful is essential. Once you get Margo Martindale in your movie, it brings some class to the project. It’s amazing how fast other actors jump on.

Yeah, exactly. Josh is so talented it’s frustrating. To be that world-renowned as a singer and then to jump into a movie and say, “What is this acting thing you speak of?” And then just crush it.

You shot the film, I think, in Mississippi, but we don’t get a sense otherwise of where the movie takes place. Why did you keep it in a Middle American nowhere?

So people would relate to it more. For me, the most powerful thing about the script is that I can see so much of my family in there even though my family is nothing like this family. There’s something everybody can relate to. It’s something I wanted for the location as well — I wanted it to feel like Anywhere U.S.A. so you would feel like that was your family, that was your hospital… So you would connect more.

If you got too specific people would say, “That’s not like my hometown at all.”

You directed one other movie, which is very different from this one. What’s directing like — is is a million times harder than acting? Does it come naturally now?

I never wanted to be one of those actors who said, “After I’m done acting, I’ll just direct” — I respect the medium too much. For me it was something I was always interested in, and I directed a few episodes of “The Office” and really enjoyed it.

Weirdly, being an actor and a director in this was really helpful. The key was making the family feel organic, and I didn’t want to call “Cut” a lot and break the vibe. I wanted to stay inside that bubble, talking very quietly about what we wanted to change and running the camera. It was like we were doing a play. Margot said it was like we were shooting a home video — I liked that idea.

I expect you still see yourself as an actor, and you’re still best known as a comic actor. How do you see your directing movies fitting into your career as you look forward?

I’m ready to direct whenever, but it’s got to be a story I connect to. I remember George Clooney saying that you can make a bad movie out of a good script, but you can never make a good movie out of a bad script. It’s just about finding the right material for me.